It often seems as if the 1980s revival began just 20 minutes or so after that decade of orgiastic greed and excess actually ended. But with The Art of the Deal recently having replaced the U.S. Constitution, it now feels official. Which makes it perfect timing to bring back Miss Saigon. The show’s romantic refrain, “a song played on a solo saxophone,” epitomized the slushy sentiment of Kenny G and Michael Bolton, while its celebrated coup de théâtre, landing a freakin‘ helicopter onstage, pretty much defined the military-industrial complex of the British mega-musical global invasion. Following its London debut in 1989, the show opened on Broadway two years later to record-breaking advance sales, running 10 years and grossing $286 million.

After scoring in the West End in 2014 with this full-scale 25th anniversary revival, producer Cameron Mackintosh has now returned the blockbuster to its original New York home at the Broadway Theatre for a limited engagement through January 2018, before it heads out on a North American tour. It should make another bundle.

I confess that when I first saw Miss Saigon shortly after its original London premiere, when it trailed in the monster-sized paw prints of Cats, The Phantom of the Opera and Les Miserables, I was underwhelmed, having grown tired of the bigger-is-better ethos and the domination of escapist spectacle over subtlety. The simplistic storytelling and aggressive emotional assault of the musical — which updates Puccini’s Madama Butterfly tragedy to the end of the Vietnam War — felt somewhat at odds with the bid for operatic elegance in the work of director Nicholas Hytner and set designer John Napier, even if the star turns of Jonathan Pryce and Lea Salonga made a strong case for the material. 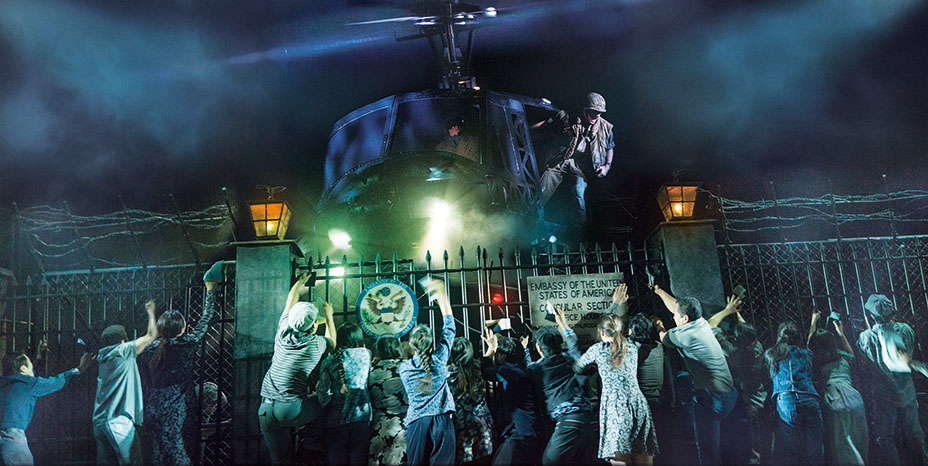 Call it the guilty pleasure of ‘80s nostalgia if you must, but revisiting the show at almost three decades’ distance, I was unprepared to be so consistently entertained for the two-and-a-half–hour duration. Sure, it’s a brash, broad-strokes saga with questionable racial and gender representation and a taste for salacious vulgarity. But although director Laurence Connor has adhered to the basic contours of the original, his grittier approach exposes teeth in the material that I don’t recall previously being so sharp. That’s most notable in the show’s unflattering depiction of American foreign policy, viewed through the prism of a misguided war and the messy atonement efforts that followed.

However, that doesn’t mean there’s any less urgency or investment in the love story, which is grounded with transfixing emotional transparency by the exquisite Eva Noblezada as Kim, the 17-year-old peasant girl from the napalmed Vietnamese countryside, driven by circumstance into prostitution in Saigon. For a start, Noblezada easily passes for a teenager; secondly, her vocals have an expressive range and sweetness that cuts through all the noise and busy-ness that surrounds her. She’s a legitimate discovery, just as Salonga was the first time around.

Alistair Brammer impresses more with his hunky physique than his interpretive nuance as Chris, the U.S. Marine whose promise to deliver Kim to a new life gets unwittingly broken amid the chaos of the Fall of Saigon. But they make a captivating couple, which is all that matters. Their separation that fateful day, portrayed in an Act II flashback, has acquired additional impact thanks to the new-and-improved chopper. The wind from its rotor blades sends a chill over the audience in the orchestra seating, as a devastated Chris hangs from the side of the departing aircraft while desperate Vietnamese remain stranded behind the U.S. Embassy gates. I swear, someone sitting a row or two behind me was shouting “Omigod! Omigod! Omigod!” through the entire scene. 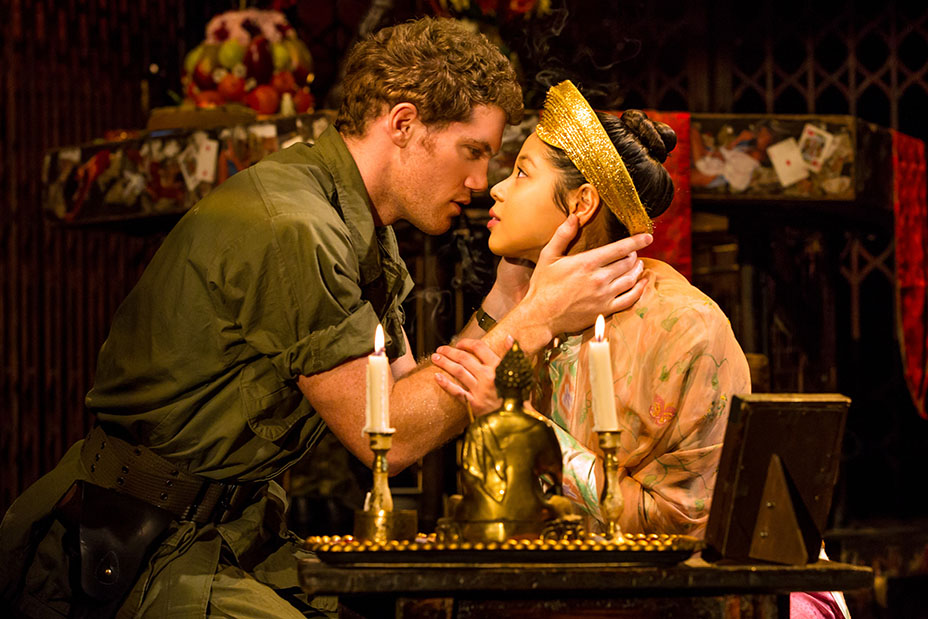 The show was a second colossal success after Les Miserables for the French team of composer Claude-Michel Schonberg and librettist Alain Boublil, with an assist from Broadway veteran Richard Maltby Jr. on the English-language lyrics. The less said about those the better (“The stink is making me choke/Turns out this war is a joke”), but there’s no shortage of pretty melodies. Less bombastically anthemic than Les Miz, the score loads up on ballads — from songs of quiet yearning to emphatic ‘80s-style declarations laced with big-belt key changes. These wear surprisingly well, breathing intensity into the story’s intimate heart and emotional sweep into the melodrama.

Miss Saigon is a show of contrasting extremes. At one end of the spectrum is the purity of Kim’s love for Chris — with touching faith and courage, she waits three years for his return to rescue her and the son of whom he knows nothing. At the other end is the shady opportunism of ‘The Engineer,’ the Eurasian pimp who sees the half-American boy as his golden ticket to an elusive U.S. visa.

Part of the controversy surrounding the show’s 1991 arrival on Broadway was the “yellowface” casting of Pryce in that role, which won him a Tony but did little to placate Asian-American actors already struggling with limited opportunities. The Engineer is played here by talented Filipino actor Jon Jon Briones (like Noblezada and Brammer, a holdover from the London run), who makes the avaricious fixer his own. Whether plying horny G.I.s with booze, coke and girls, weaseling his way around the Vietnamese People’s Army brass, or later, seething about the Bangkok bosses who treat him like refugee scum, the Engineer is a deliciously amoral profiteer, a parasitic carnival barker who feeds on others’ misfortunes. But despite his leering eyes, lascivious gestures and snake-like moves, the wiry Briones also humanizes the dissolute character. In the Engineer’s own sordid way, he’s another casualty of war, poverty and oppression. 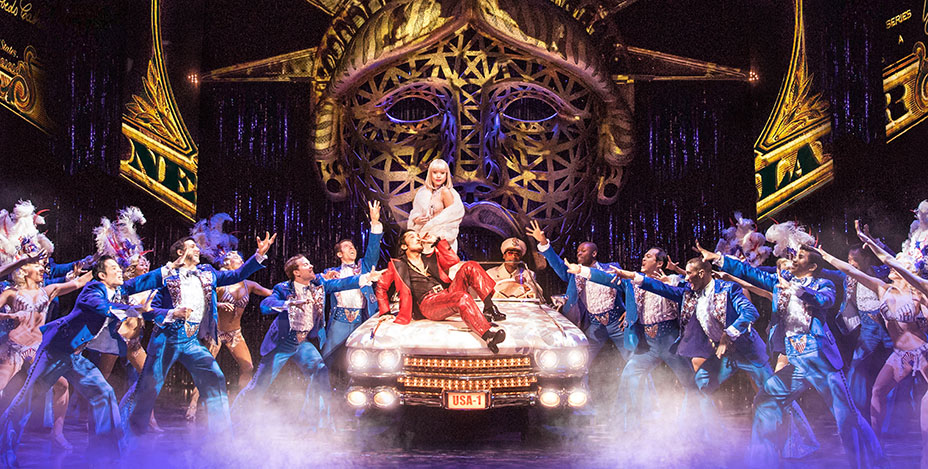 His splashy showstopper, “The American Dream,” is an obscene vaudeville accompanied by a platoon of feathered showgirls and slick male dancers. (Original choreographer Bob Avian again steers the musical staging.) The song illustrates the tawdry flipside of the capitalist fantasy, complete with a cheeky Trump dig that drew cheers; its overblown glitz serves to make the Engineer’s aspirations all the more hollow. A massive gold Statue of Liberty head literally spits out a Cadillac, which the Engineer proceeds to mount with lewd abandon. That image cleverly mirrors a giant Ho Chi Minh head suspended earlier over the precision militaristic and acrobatic displays of the Vietnamese Communist soldiers in “The Morning of the Dragon.”

Those set-pieces, along with the helicopter, provide the show’s razzle-dazzle moments, but the work of scenic designers Totie Driver and Matt Kinley is impressive throughout, from the bamboo architecture characteristic of Southeast Asia to the tacky neon of Bangkok’s sex-tourism hub. Original costumer Andreane Neofitou makes Kim enchanting in her simple white sheath dress, while the Engineer’s garish suits are supremely sleazy. (Love the python trousers.) And lighting designer Bruno Poet enhances the shifting moods, from seedy nightlife to wartime mayhem, from ostentatious displays of military might to tender trysts. Bathed in fiery reds, the tableau of the Engineer, Kim and her young son Tam (the adorable Jace Chen at the performance reviewed), departing Saigon toward an uncertain future, is especially stirring.

In addition to the leads, there are strong vocals from Rachelle Ann Go as bargirl Gigi (“the sex toy from Hanoi”), who pairs beautifully with Noblezada on “The Movie in My Mind” and the touching “Wedding Ceremony”; Devin Ilaw as Thuy, the cousin to whom Kim was promised in marriage, who becomes a commissar in the People’s Army; Katie Rose Clarke as Chris’ well-meaning American wife (she gets a new song, “Maybe”); and Nicholas Christopher as his Marine buddy John, whose post-Vietnam consciousness-raising puts him in charge of an aid organization for children left behind by American soldiers. Connor jabs the tear ducts a little forcefully with the extended film from child refugee camps running during John’s impassioned song, “Bui Doi.” (I kept waiting for Alyssa Milano to pop up, asking for 50 cents a day.) But the ‘80s mega-musical was never known to tiptoe gently around its themes.

This is brawny, crowd-pleasing entertainment with a cast of 36 and an 18-piece orchestra. It’s not for theater snobs, but the audience’s enthusiastic response on the first press night indicated a hearty appetite for its ardent, unabashed sentiments. Mackintosh certainly hasn’t scrimped on remounting the show, leaving no mystery as to the reasons for its worldwide success.