For both young and old, the memory of the opening scene of  Mr. Rogers’ Neighborhood is still familiar. Fred Rogers walks in the door, changes into a cardigan and a pair of navy tennis shoes (Sperry to be exact), and his call to arms was a simple one, “Please, won’t you be my neighbor?”

Similar to Dorothy’s ruby red slippers, Mr. Rogers’ signature zip-up cardigan was essential for the onscreen transformation in A Beautiful Day in the Neighborhood. It also proved to be a starting point for costume designer Arjun Bhasin’s work on the upcoming film.

Since Hanks appearance was transformed only by a wig and enhanced brows, the clothes needed to speak for themselves. Bhasin notes that recreating Mr. Rogers’ wardrobe was a “creative interpretation” and first did a deep dive into why he dressed the way he did. 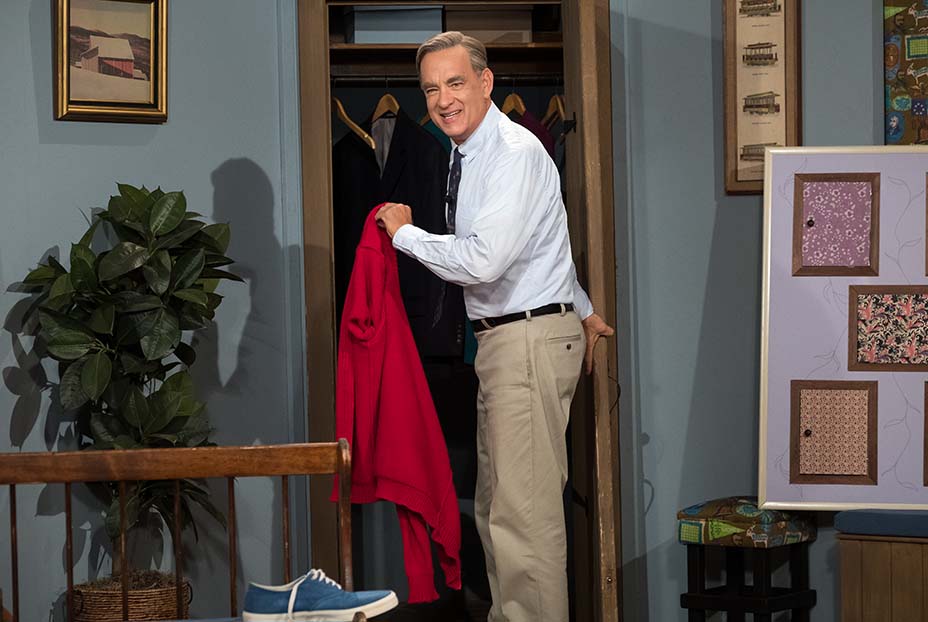 Referencing the cardigan, he explained, “The first one was made by his mother Nancy (who knitted a sweater a month), and I think there was a comfort to that cardigan. I think a lot of things he did were to draw audiences in and make them believe it was a safe place, a family place, and one where they could be who they wanted to be.”

While the acrylic, cable-patterned cardigan was made in different colors throughout the years, the red one was the most iconic. “There is a very deliberate gentility and comfort you can’t get with another garment,” notes the designer, who didn’t discover Rogers until he was an adult. “The primary colors spoke to me and [were hues] that children could relate to. I think that it’s really important, the way he played with color. It was deliberate and not a mistake.” To make the 8 to 10 sweaters needed for the production, Bhasin found a hand-knitter in the New York theater: “I tried to find the exact shades of dyed wool,” she says. “I felt very much like we had to honor his legacy and be true to the show as much as possible.” 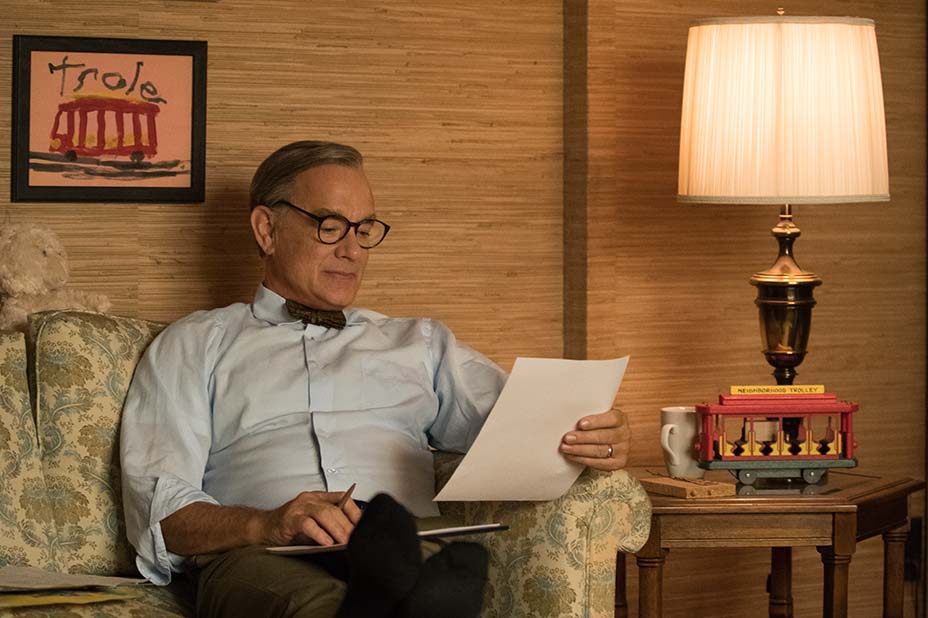 The designer (who worked with the film’s director Marielle Heller on 2018’s Can You Ever Forgive Me?) was fortunate to have tapes of the long-running PBS Show (1968 to 2001) at his disposal, along with his guest appearances on The Oprah Winfrey Show and The Arsenio Hall Show. Artifacts at Pittsburgh’s Heinz Museum and at a museum in his hometown of Latrobe, Pa., which houses his cardigans, also proved to be beneficial. “We got to put on gloves and touch and measure things and see it with our own eyes.” Perhaps the pièce de résistance came in the form of an invitation from Rogers’ widow, Joanne, who literally opened up her late husband’s closet doors.

“She invited us to her home and kept saying, ‘I don’t know what to do with all this stuff,'” said Bhasin.  “We borrowed some of his ties from her, which Tom was thrilled to wear, and we were thrilled to be able to honor. They were not fancy, as he was pretty modest. It was special, as the ties have been in the minds of his fans.” 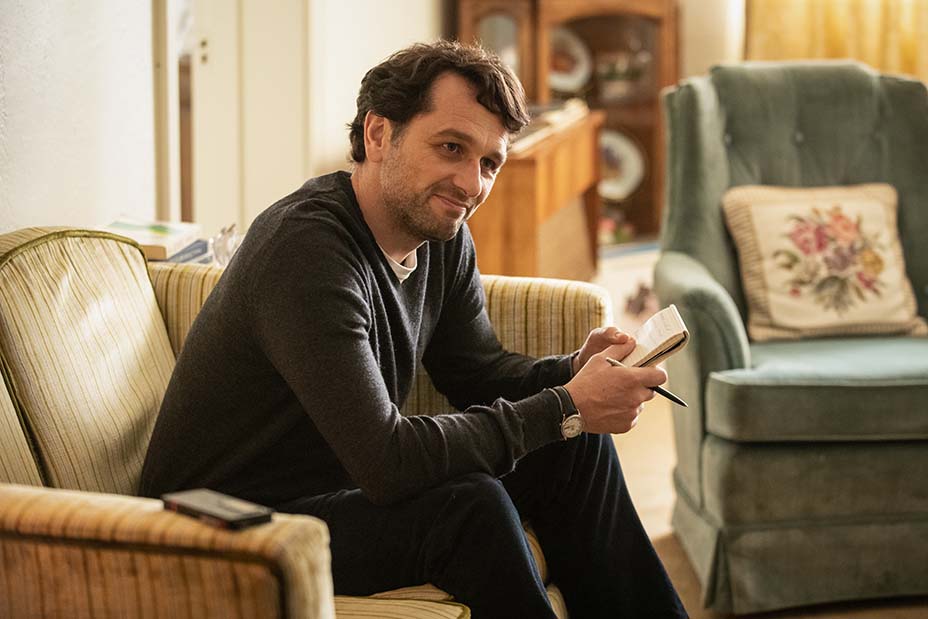 The world of of real-life journalist Lloyd Vogel (played by Emmy Award winner Matthew Rhys) was a marked contrast from Rogers’ “home-spun world of Pittsburgh,” notable for bright colors and light.  Bhasin wanted Vogel’s realm to “feel like a complete antithesis of this, as he is a New Yorker and a kind of bristly character with a downtown New York-Wall Street kind of look.” Using fashion-forward styles from the late ’80s and early ’90s with a darker color palette and coarser fabrics, the designer referenced fashion designer Giorgio Armani to delineate Vogel’s world. “It’s all about setting up the worlds against each other, the space between them and seeing how they react,” says the designer.

Bhasin, who lives between Manhattan and Mumbai, had fun dressing Vogel’s estranged father, Jerry (Academy Award-winning actor Chris Cooper), who was the third character in the film. “Being from New Jersey, Jerry has this Goodfellas kind of thing going on and would wear a white tuxedo dinner jacket that he had for years, along with a velour track jacket that he thinks he looks chic in,” he says. “I have a theory that people end up wearing clothes from their best periods in life when they were the coolest. For Jerry, he was trapped in the ’70s.” 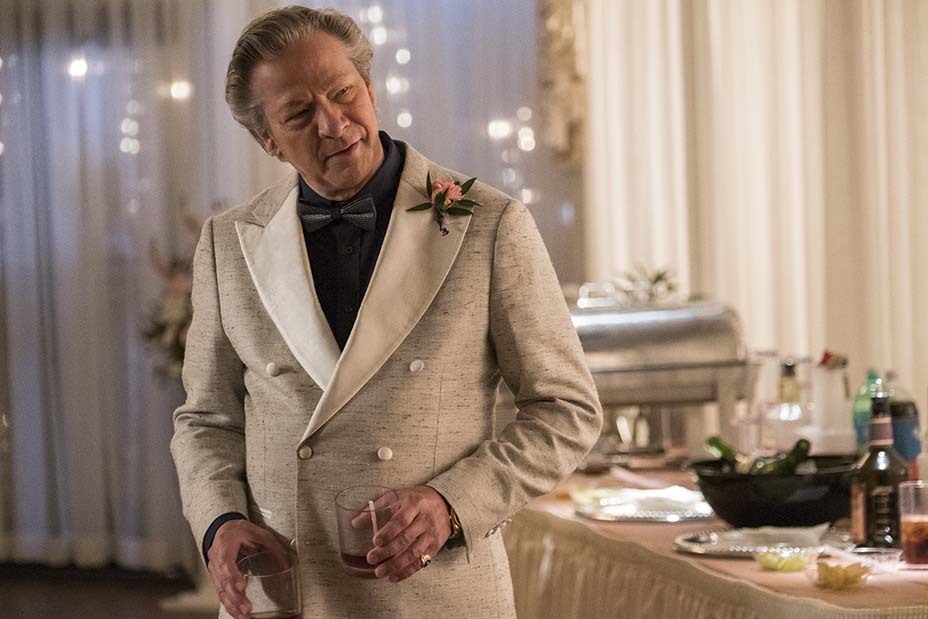 As for working with Hanks, Bhasin says it was easy. “It wasn’t hard at all to help him morph into the character seamlessly, as he is such a beautiful man. He was always involved and wanted to be true to Mr. Rogers’ clothing.” Hanks even pulled off the shoe trick, seen in every episode, where he takes one show off and successfully tosses it to the other hand. “His timing was beautiful!” says Bhasin.

Marielle Heller on 'A Beautiful Day in the Neighborhood' Being a Non-Biopic: "Mr. Rogers Can't Be the Lead"