When he took the stage Saturday night to pay his respects to MOCA, its board and director Philippe Vergne, and the more than 500 guests seated in a tented structure outside the Geffen Contemporary at MOCA, Jeff Koons attempted to shift the spotlight off his world-famous works and headline-generating career and shine it on the city outside.

“It’s very kind to put the attention on me and to honor me, but we’re really celebrating Los Angeles … and the vitality of the art world,” said the 62-year-old artist and sole honoree at the museum’s 38th annual gala, which raised more than $3 million. “I was telling some friends the other evening that Marcel Duchamp has Philadelphia — that’s where they have the most condensed collection of his work. I have Los Angeles.” Applause filled the room, and Koons wasn’t done. “With MOCA, LACMA and The Broad, and with all of the individual collectors that are in this room, it’s the most condensed area anywhere in the world with my work. I’m proud to say that if you would like to view my work and interact with it, come to Los Angeles.”

Cannes 2022: What and Who Will Take Home Festival Prizes?

The tourist board-ready proclamation drew more applause, and since Koons was already here, he spent the hours before the event doing just that — celebrating the vitality of art in L.A. by visiting those museums. 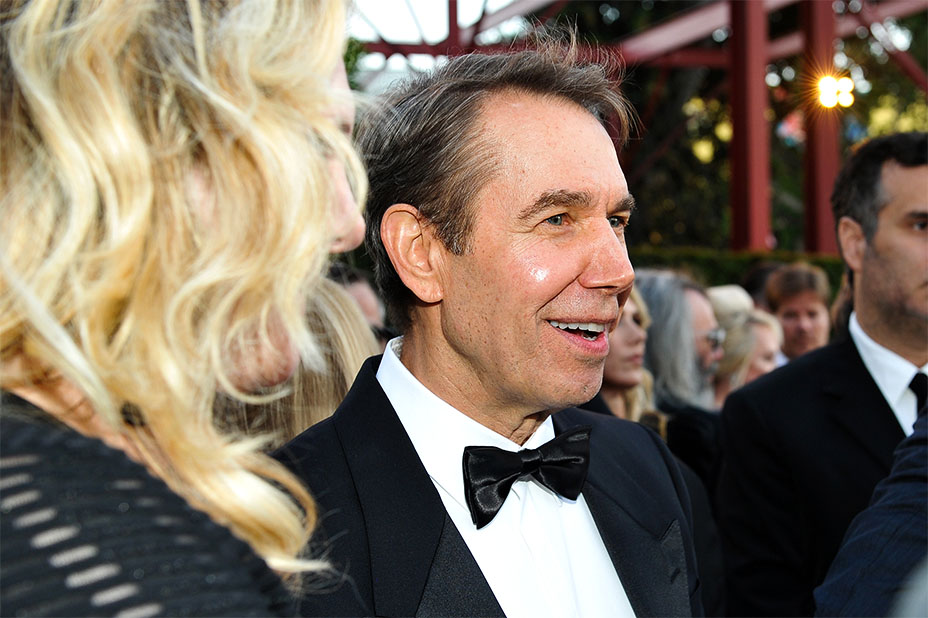 When he arrived to the purple carpet for the gala, Koons told The Hollywood Reporter that he started his day with a visit to LACMA, where he checked out the current exhibition “Picasso and Rivera: Conversations Across Time,” met with museum director Michael Govan and “looked at everything that is happening there.” Next on Koons‘ Saturday agenda: A meeting with Maurice Marciano about the soon-to-open Marciano Art Foundation in renovated temple on Wilshire Boulevard, where he got a sneak peek at “all of the work he’s collecting from young artists right now.” Then Koons moved on to The Broad — home to the largest collection of Koons‘ work of any U.S. museum — where he met with founders and friends Eli and Edythe Broad and founding director Joanne Heyler.

“I’ve had an absolutely thrilling day,” he admitted. “I feel like I’m getting a sense of what’s taking place at this moment in Los Angeles. There are more opportunities for artists who see the possibilities to be engaged and to live here and develop their work here. It’s a community that is broad enough and rich enough to give those possibilities.”

It proved to be a pretty thrilling and colorful night, too.

A bright pink step-and-repeat lined the arrivals line outside Geffen Contemporary but was no match for what was ahead. An outdoor cocktail reception featuring champagne and bites by Wolfgang Puck (everything from caviar to sliders) kept guests busy from 6-8 p.m., ample time to check out current exhibitions. Currently on view are “Carl Andre: Sculpture as Place, 1958-2010,” Arthur Jafa’s “Love is the Message, The Message is Death,” and “Selections from the Permanent Collection: Catherine Opie and Sterling Ruby.” 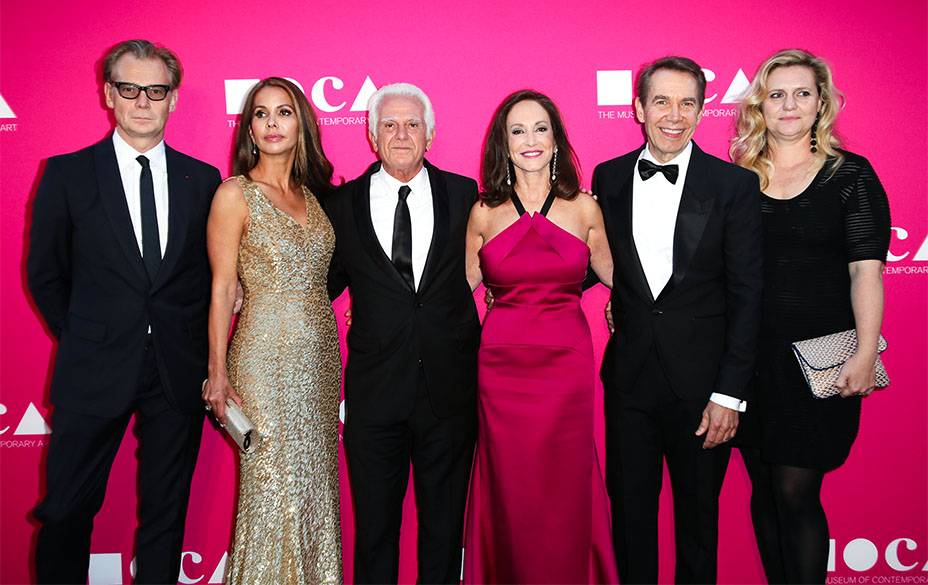 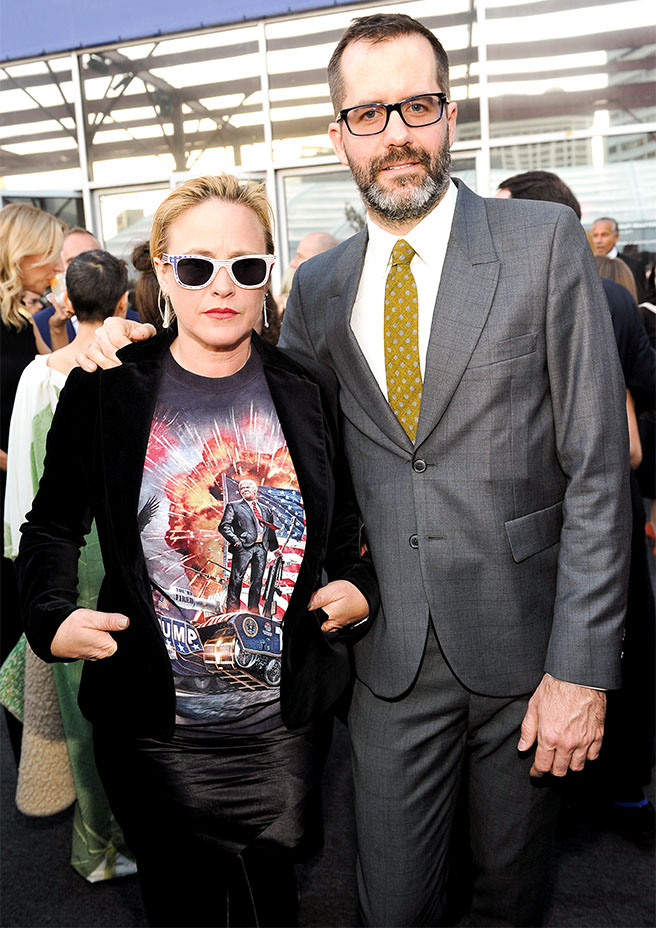 He may have preferred to let L.A. and some of those names shine, but guests were quick to gush over Koons. “He’s the best living artist,” Israel told THR. “And he’s my favorite artist and his work is endlessly inspiring.” Israel then revealed that he was among the group of friends who heard Koons make the Duchamp correlation at a dinner to celebrate the opening of his Gagosian Gallery exhibit on Thursday night. (Friends also help friends do interviews, so after Israel offered his compliments, he helped pal China Chow come up with her own: “It’s so great to be supporting MOCA at a time when the arts have become such an important part of Los Angeles’ identity.”) 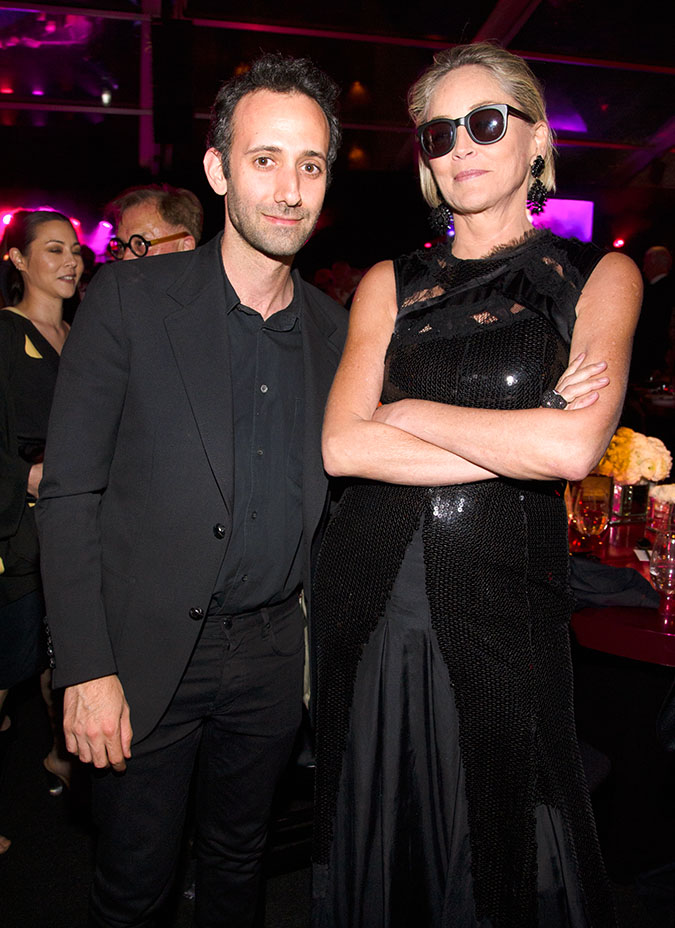 Paris Hilton, in a Self Portrait dress, purred, “I love his work,” about Koons while her boyfriend, Chris Zylka, stood nearby. He did make himself useful, at one point fixing Vergne’s tie and tucking it back into his Margiela blazer. Clearly, he’s into fashion. “My boyfriend picked this out for me,” Hilton told THR of her dress. “I was going to wear a long gown, but it felt too Cannes-like. This is elegant and simple yet beautiful and chic.”

A Gagosian show, a MOCA honor and his much-buzzed about collaboration with Louis Vuitton has been enough to cement a new “Jeff Koons is having a moment” status. Liz Goldwyn didn’t mention any of the three when she expanded upon her love of the artist. “The show he did at Versailles was one of my favorite high-low contrasts of art,” she said. “The porcelain sculptures in contrast with those heavy draperies was unbelievable.”

Koons‘ controversial porn-meets-art-phase also made an appearance in the video tribute introduced by Vergne. Written and directed by Oscar Boyson, narrated by Scarlett Johansson, and featuring appearances by everyone from Gagosian to Pharrell Williams, the fast-paced clip tracked his humble beginnings selling memberships at the Museum of Modern Art in New York to his rise to art icon status. The video positioned him as a true pop culture phenomenon who is now best known for turning everyday objects into monuments. Also noted was his other contributions designing cars, concert backdrops, yachts and album covers, and his love of music. (He still listens to Led Zeppelin every day.) Not mentioned: His distinction for having the most expensive art ever sold at auction when his Balloon Dog (Orange) sold for $58.4 million in 2013. 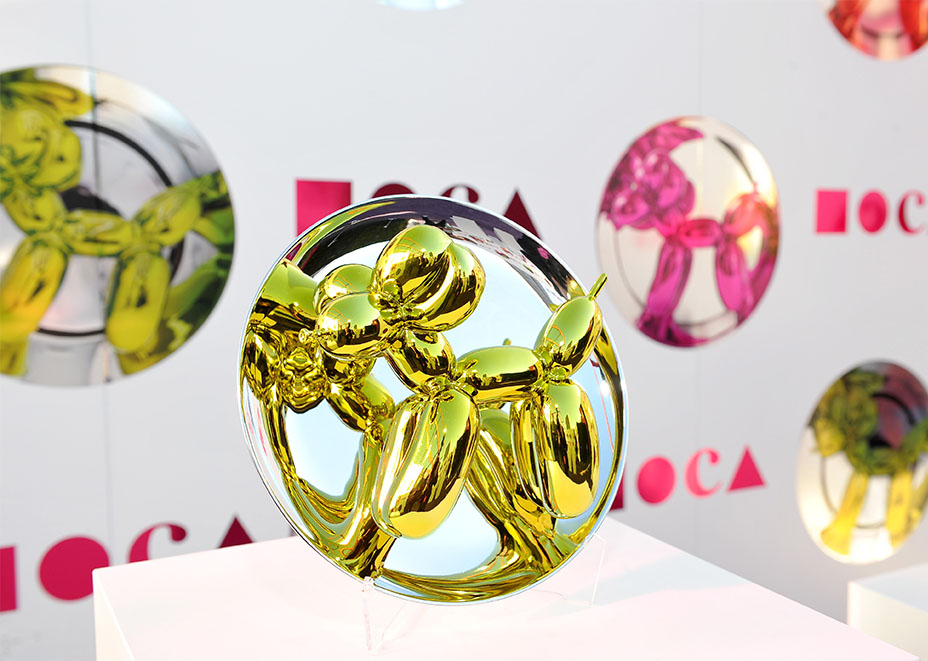 Even though he got the video treatment and introductions by both Vergne and Brosnan, the former claimed none of the lead-up was really necessary. (Brosnan gave it his all anyway, offering this earnest display: “Like an actor, Jeff has managed to transcend the everyday and the mundane. He seduces us with his visual poetry, his creativity and unique optimism. We are delighted. We are amazed. We are inspired.”) 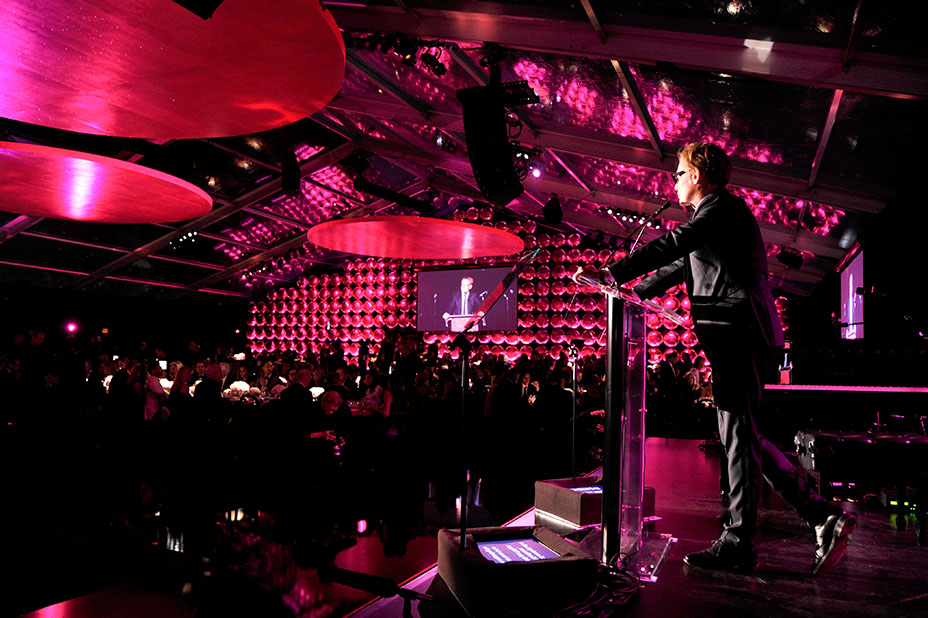 The “Play-Doh” mention was a nod to the iconic Koons creation, which he detailed in his acceptance speech by noting that it took him 20 years to create, a process that took place in this city. “Los Angeles has been so important to me and my generation,” said Koons, who attended the event with wife Justine Wheeler Koons. He also teamed with art fabrication facility Carlson & Co. to create his Balloon Dog series here, as well.

“I learned really early on — it was my first art history lesson — that art is so powerful and it could connect so effortlessly the viewer to all the human disciplines. You can be involved in philosophy and psychology and aesthetics and physics. My life changed at that moment,” Koons continued. “I could be in concrete control of my life and I could create my own destiny. We have an opportunity to communicate to people that they can have a concreteness in their life. Art gives them an understanding that their parameters can be increased. It’s a wonderful gift and opportunity we have to share this with people every day.”

He’s done more than just share his gifts with Los Angeles. Vergne praised Koons‘ philanthropic side of which MOCA has been on the receiving end to the tune of $5 million over the past few years. “He has been a game changer for the art community,” he explained. “I really wanted, with our board, to honor someone, an artist, who is also a philanthropist. The artistic community gives so much and it’s important to acknowledge that.”

It’s also noteworthy that Vergne has given of himself to the vitality of L.A.’s cultural landscape, most recently testing his mettle as a model by walking in the Hermes: Dwntwn Men spring 2017 runway show on Spring Street in downtown L.A. It was a real event, one that cast Vergne alongside notable names and surprise models like Commune design co-founder Roman Alonso and chef Ari Taymor. “I was cheap labor for them,” he laughed. “It was like immigration labor, but you know, I am fully documented so I was OK. ICE didn’t come and run after me. But, as you know, with the museum we entertain a lot of conversations with the world of fashion and that includes Hermes. I was nervous but sometimes you have to face your fears.”

John Legend didn’t look skittish at all when he took the stage following Koons‘ speech, nor did the gala attendees. Instead, many of those seated in prime real estate next to the stage jumped out of their seats and rushed the stage. Legend’s 30-minute set included hits “Green Light” and “Love Me Now.” He then brought out surprise guest Miguel, another art world aficionado, to due on “Overload.” 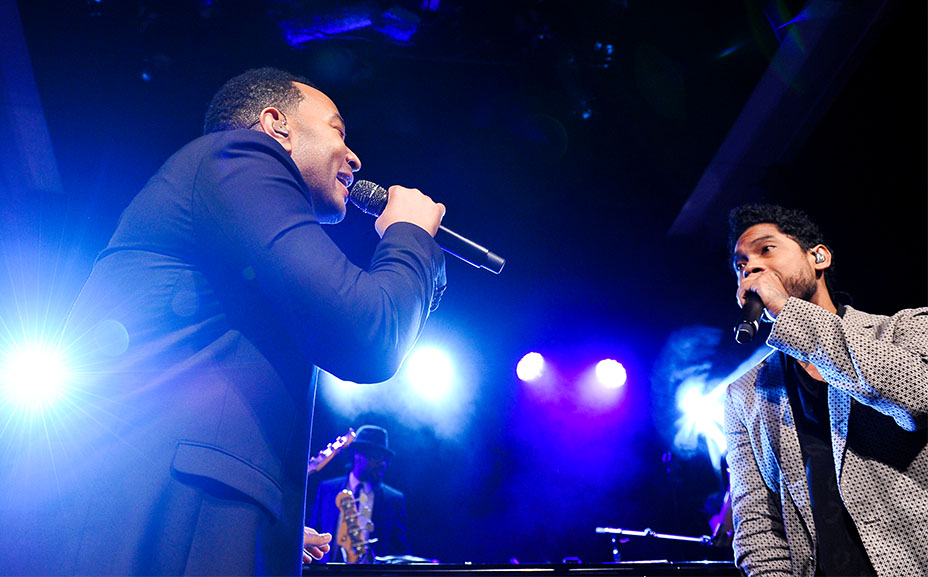 DJ M.O.S., a recently L.A. transplant from New York, handled the afterparty’s music and kept the party going past midnight outside where guests noshed on donuts and sipped coffee to counteract the Wally’s wine served during dinner.

Not necessary for Koons, though, who said he doesn’t imbibe much anymore. “I used to enjoy drinking beer, but over the years I don’t drink so much anymore, mostly because I have a lot of children,” he smiled. Eight to be exact. And speaking of youth, maybe Koons was so keen to pay tribute to the city because of what he sees for the future. “When I am speaking with younger people and I ask them, ‘Where do you think you’re going to start and develop your work?’ ” he said at the end of his remarks. “More and more, the artists are saying, ‘I’m going to Los Angeles.'”

That’s certainly something to celebrate.