With the end of an era coming for ABC’s long-running sitcom Modern Family, author Marc Freeman is ready to give insider access to the show in lieu of the series finale.

In Modern Family: The Untold Oral History of One of Television’s Groundbreaking Sitcoms (St. Martin Press), Freeman details behind-the-scenes stories with full participation from cast and crew, including co-creators and executive producers Christopher Lloyd and Steve Levitan and casting director Jeff Greenberg. Castmembers will also offer their impressions from their first table read through the series finale, expected to air in April.

“From script development to final season…readers will get a glimpse of the cast’s relationships with each other and the emotions attached to saying goodbye from the best and longest-running workplace many of them have ever experienced. With this book, the fascinating history of a groundbreaking show will finally be shared,” St. Martin’s Press says of the book.

The end of the series was announced last February during the Television Critics Association press tour. The full cast, minus patriarch O’Neill, joined Levitan on stage at the 2020 TCA winter press tour Wednesday to bid farewell to the series, set to end in April.

Below The Hollywood Reporter shares the cover and a foreword written by Lloyd:

My thoughts often go back to August 2009. The pilot has been shot and the series has been ordered, but apart from a relative handful of studio, network and advertising people, no one in America has a clue what Modern Family is. Which means that we are showing up to work at the barn that is stage 5 on the Fox studios lot, and we are, 80 or so of us, making episodes of a thing that isn’t really a thing yet. But there is an unmistakable suspicion that what we are making may be…well, let’s not use the word “good” or “special” or any other words that might tempt the itchy fingers of the lightning bolt-wielding comedy Gods. But it does feel like promise.

How else to describe the sensation of discovering that Sofia Vergara isn’t just beautiful, but is a first-rate clown? Or that Ed O’Neill can do more with a raised eyebrow than most actors can do with a soliloquy? Or that Julie Bowen and Ty Burrell, both consummate professionals, are reducing each other to a demonstrably unprofessional level of laughter mid-take on a daily basis? Or that Eric Stonestreet is making us marvel five different ways in five consecutive takes, forcing his scene partner, Jesse Tyler Ferguson, to counterpunch five different, equally inventive ways?

And it’s not just that our actors are showing a resourcefulness we had no clue they possessed. The chemistry within each couple is palpable (and this is a thing you simply can’t gauge until you see your actors in scenes together…you can hope, but you can’t know). Yes, it is by design that we have a more buttoned-down spouse and a more combustible one in each couple, but who knew these twosomes would seem so real? The actors make us understand why these people would be with each other — would be good together. This Gloria WOULD choose this Jay. This Claire WOULD find this Phil irresistible.

Across from stage 5 where this happy experiment is playing out, another is happening in a different barn. This is where our writers gather and where we have stumbled into a highly effective and Marquis de Sade-worthy process premised upon the idea that this show is only going to be good if it feels real to people. So, we are all going to have to unburden ourselves of our most embarrassing personal stories because that is the grist our comedy mill seems to need.

Now revealing an embarrassing personal anecdote to a room of comedy writers is, on the survival instincts scale, right up there with rubbing yourself with salmon and lying down outside a cave full of hibernating bears. But so it is that Danny Zuker tells us of his gallstones attack and his wife’s changing into a sexy outfit before the hunky EMTs arrive. And Brad Walsh tells us of his doomed ice dancing partnership with his sister. Dan O’Shannon’s father once canceled Christmas. Bill Wrubel went out with a woman on Halloween but wasn’t sure if it was a date or just a fun Halloween night out, so he wore a Spiderman costume under his clothes. These and other inglorious tales all become the basis for episodes.

Six weeks pass like this. The stories are coming easily in barn one, though not without plenty of averted eyes at the lunch table (Did I really reveal that, at 13, I practiced mouth-to-mouth resuscitation on my sister in a lifeguard training class…that’s pretty damn close to admitting I made out with my sister, both of us wearing goddam bathing suits!). And in barn two, the actors, and directors, and cinematographers, and costumers and gaffers and set-dressers — everyone — are showing a dedication to detail that is the hallmark of professionalism, or at least the hallmark of don’t-let-me-be-the-one-to-screw-it-upism. And thus we arrive at our premiere night, September 23, 2009.

We gather, those 80 or so of us, at a Mexican restaurant and we watch our show as America watches it for the first time, our secret a secret no more, and I remember two things best from that night. One, that life was about to be very different for all of us. And two, that there is no better feeling than being on a team where your teammates make you better.

Ten years have passed since that time. 250 episodes, marvelous additions to our wondrous cast, a parade of the best comedy writers in Hollywood all submitting to our cheek-reddening process. It’s been a dreamy journey. We’ve seen our child actors become adults (they were always brilliant, now they’re just older, with houses). We continue to find stunning skills among our cast. Julie playing Claire’s inability to confront the topic of death without smiling…. Ed playing both remorse and boundless love walking his son down the aisle…. Ty, who makes us cry with laughter every week, making us cry the even better way learning that his daughter is no longer a virgin…. And Sofia speaking Russian, Jesse fighting off a pigeon, Eric going to pieces at the choice Sophie had to make. The list goes on….

Season one, we’d have occasional guests come to our set. Before long this number grew, to the point where, in the final seasons, we’d commonly have 30 or 40 visitors, in their own gallery, observing as we made our show in that same barn we started out in. And the comment most often heard was “you all look like you’re having such a great time.” Well, it’s important to note here that we are talking about entertainment professionals, people steeped in the black arts of make-believe, who know how to put on appearances for an audience.

It’s also important to note that we were having a great time, probably the best we’ll ever have.

Excerpted from Modern Family: The Untold Oral History of One of Television’s Groundbreaking Sitcoms by Marc Freeman. Copyright © 2020 by the author and reprinted by permission of St. Martin’s Publishing Group.

Modern Family: The Untold Oral History of One of Television’s Groundbreaking Sitcoms will be released May 19. 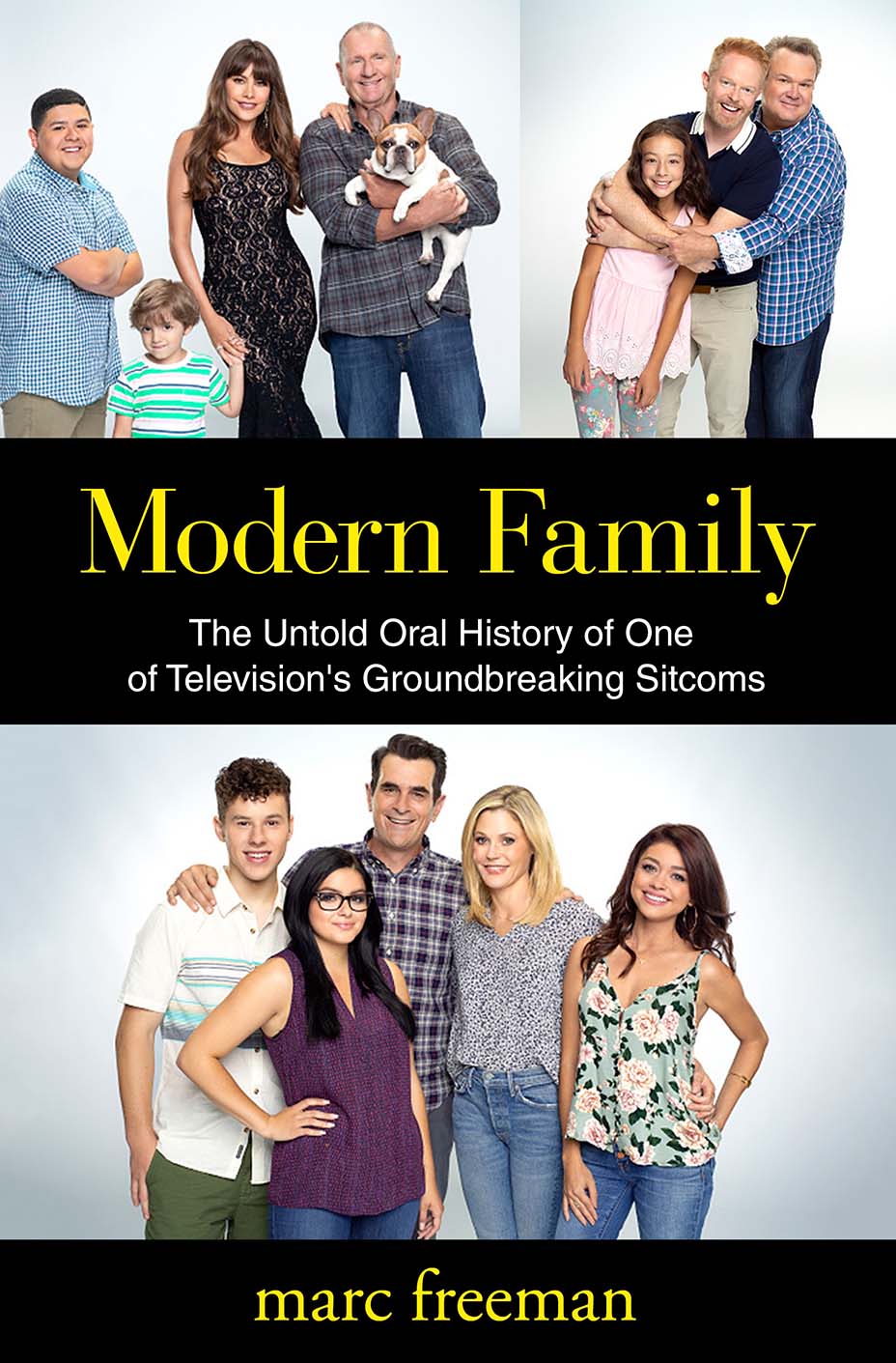