This partnered feature is produced by Hollywood Reporter editorial staff in conjunction with a paid brand partnership with AppleTV+.

Since it was announced in August 2017 — with Jennifer Aniston and Reese Witherspoon as co-stars and co-executive producers — Apple TV+’s The Morning Show, centered on a fictitious morning news program, has generated plenty of its own headlines. From Aniston’s and Witherspoon’s $2 million-per-episode fees to a creative dust-up that saw first-time showrunner Jay Carson replaced by Kerry Ehrin, every move on the tech giant’s first big original was scrutinized as keenly as the #MeToo scandals that helped inspire it (including Matt Lauer’s ouster from Today amid allegations of sexual misconduct).

Based on CNN anchor Brian Stelter’s 2013 book Top of the Morning, the show premiered the first three chapters Nov. 1 (with seven more rolling out weekly through the end of the year). The trio of episodes dropped just two weeks after Ronan Farrow’s Catch and Kill reported additional allegations against Lauer and his NBC News bosses. During an Oct. 24 conversation with THR in front of a SAG-AFTRA audience, the two stars unpacked the show’s “uncanny” timing and the relationship between Aniston’s Alex Levy, a veteran reeling from the firing of her co-anchor (Steve Carell), and Witherspoon’s Bradley Jackson, an upstart from a conservative news outlet who (spoiler alert) will end up taking his place.

What’s it like to see the show arrive when the news stories it was inspired by are back in the headlines — in a more dramatic way?

REESE WITHERSPOON It’s uncanny how prescient the show is because things are going to unfold toward the end of the show [that are similar to current headlines]. Unfortunately, gross negligence happens across many platforms and in many companies, so we had a lot of information.

ANISTON The fact that [showrunner] Kerry Ehrin was able to tap into it — she’s not a part of that [TV news] world in any way — yet she was able to create characters that were layered and complicated and honest and messy. 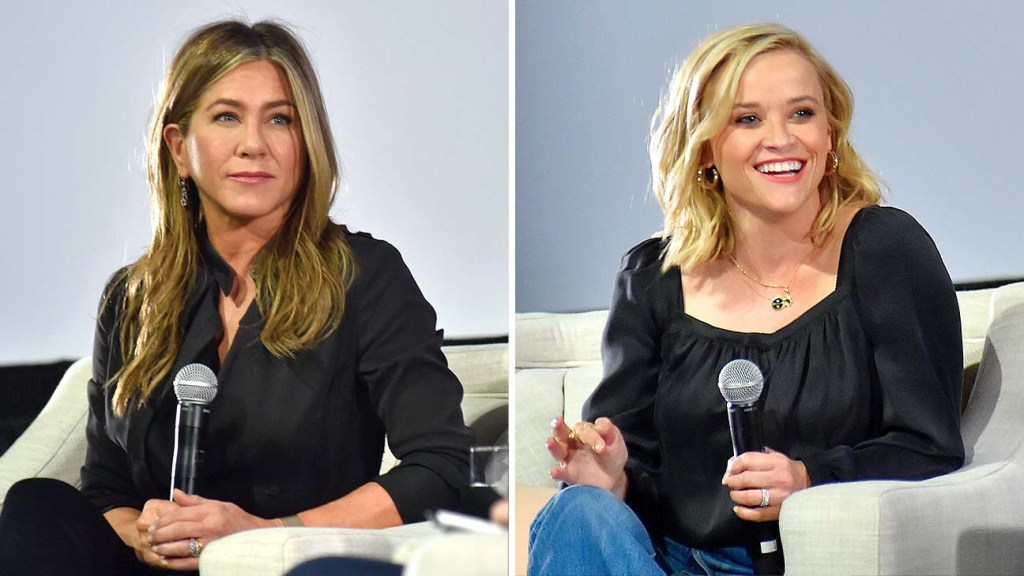 Did you do research with people who work in morning TV?

ANISTON I went to New York, and Good Morning America was kind enough to allow me in at 5 in the morning. To walk through that world, which is an insane engine that revs up and then explodes — it’s done with such ease and grace. You think, “There’s no way this is going to happen.” And it just does. The lives of these people! They live these lives of vampires underground, constantly figuring out what they’re going to tell all of us so hopefully we don’t feel crappy throughout the day. They all say — even Diane Sawyer — it’s never easy. Waking up at 3:30 never gets comfortable. They hate it.

Reese, you’ve played a lot of straight arrows — in Big Little Lies, Election — who are controlled and then they bust out. Here, your character is a firebrand from the start — whom did you draw on?

I definitely looked at people who have no impulse control — my character just has this tendency to say things and then think about it later. It was really fun to play. That first scene was hard [Witherspoon’s character gets into a screaming match with protestors at a coal mine]. I had to memorize all those words [about the science and politics of coal energy]. I think I said “geranium” in one take. They were like, “Geranium is a flower.”

Jen, there’s a moment when Alex says she’s running on impulse, yet she shows a pretty controlled woman to the world. How did you find that balance?

ANISTON One of the wonderful things about Alex’s character is the layers I was able to access — the human being and the woman who has to pull it all together and say good morning to America. You have such a deeper appreciation for these anchors because life is happening and they’re there for us. They’re our constant.

WITHERSPOON There’s something about being on live TV, too, that is terrifying. Because you can make so many mistakes.

What was the most surprising thing you learned about their world?

WITHERSPOON The way that they synthesize information and [report] something terribly tragic then transition to something really upbeat is so weird. “There was a train crash. And also, vitamin D!” And I remember walking on set, and Jen, she had her newscaster voice, and I was like, “I don’t have my newscaster voice yet. How did you get that newscaster voice?” She was like, “Well, I watched a lot of newscasters.” 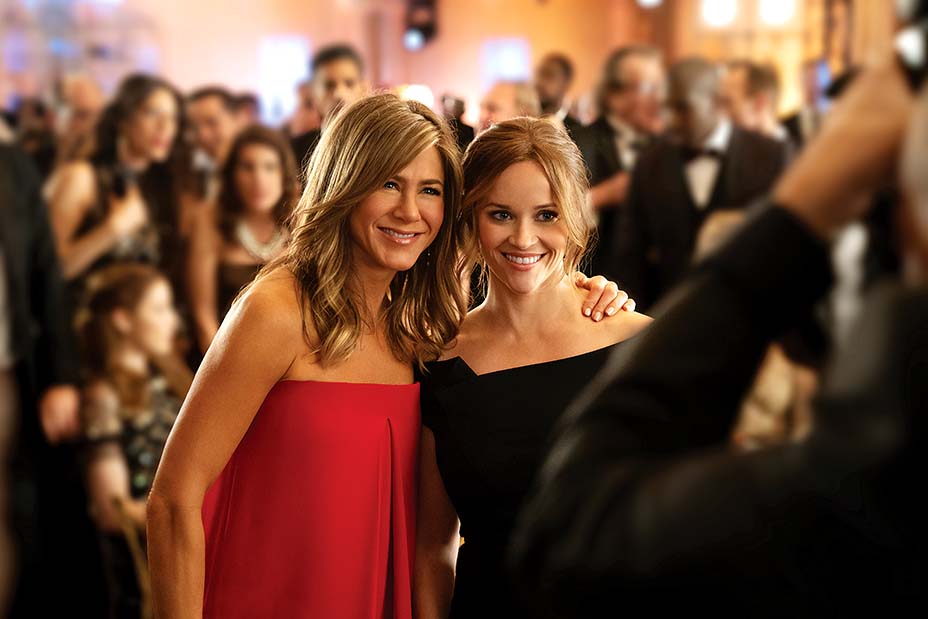 Bradley and Alex are being set up as competitors in the first couple of episodes — but it’s not clear whether they’ll play that game. How did you go about upending notions of women and competition in the workplace?

WITHERSPOON We felt strongly it wasn’t this adversarial relationship. It was just two women with different ideologies having to exist in the same space. But there aren’t a lot of references for two strong women in the same space, right? This is a new thing that’s happening now in dramatic premium television. So it was kind of the wild, wild West. Whatever we wanted to make it. And our relationship goes up and down.

You are on your phones a lot in this show, which is true to life in media.

WITHERSPOON Media people are on their phone constantly because you can’t be a minute behind. If you’re a day late, you’ve lost the story. I learned so much about how competitive it is between networks because you’re talking about a $500 million enterprise. If you drop in the ratings to second, you lose about $100 million in advertising. It’s a high-stakes world.

Jen, you and Steve Carell share an intense scene in the first episode when Alex goes to Mitch’s house to confront him about what he’s done.

WITHERSPOON Through the season, you get to see what Mitch’s life becomes, which I really like about the show. It helps show what his inner life is like, what happens to his wife and kids and his reputation. Steve does such an incredible job grounding that and making you care for him as a human being.

ANISTON Who really does not understand what happened: “What did I do?”

WITHERSPOON One day, he woke up and the rules changed and no one told him.

ANISTON That’s the charming narcissist. He’s like, “Everybody wants to be with me, right?” So it’s a rude awakening.

Jen, after staying off of social media for years, you recently joined Instagram. What convinced you to join? Was it because of the show?

ANISTON I blame all of you. I sort of just felt — listen, this isn’t going to go away. So you know, why not? Can’t beat them? Join them. Now I really want it to be over.

Reese, have you had any bad social media moments?

WITHERSPOON Yes, of course! You realize that everybody has it and it’s like white noise, right? You can’t remember it three minutes later. We all mess up. You make mistakes. You say sorry in a genuine way and move on.

ANISTON So, “sorry” ahead of time.

The One Where They Were Sisters

Nineteen years before they joined forces for Apple TV’s The Morning Show, Witherspoon locked horns with Aniston on NBC’s Friends — she played Rachel Green’s sister Jill, who (gasp) goes on a date with David Schwimmer’s Ross. Where would the Green sisters be now? “Making The Morning Show,” jokes Aniston. Starting in May 2020, you’ll find Rachel and Jill on HBO Max; the WarnerMedia service locked down domestic streaming rights to Friends in a $425 million deal amid a library arms race that continues to escalate. 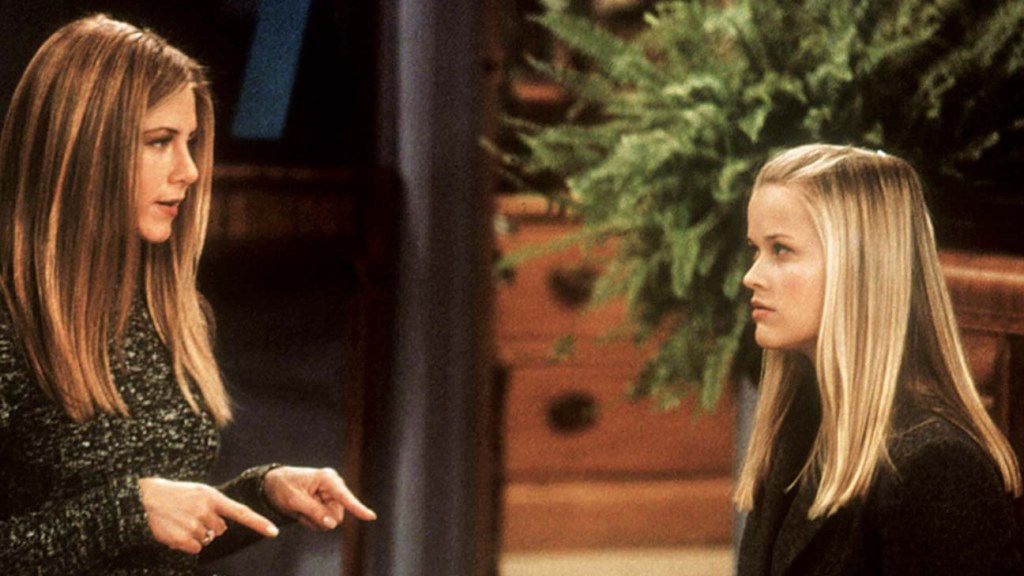