There are numerous moments of serendipity as Janina Gavankar tells the story of how she was able to fund and make her first directorial showcase on her short film Stucco, moments that include Apple, Ben Affleck and a tight group of artistic friends.

The Illinois actor-filmmaker-musician co-wrote, co-produced and co-directed the eerie 17 minute film —selected for this year’s SXSW Midnight Shorts competition —  with her creative partner, Russo Schelling. Gavankar also stars as the lead, a woman dealing with crippling agoraphobia and throughout the nightmarish scenes, finds herself facing a slimy, terrifying monster behind the wall who comes closer and closer to consuming her.

“Stucco is really about not dealing with guilt, anxiety and mental health, and how it can manifest within you,” Gavankar tells THR. “That’s why I love art house horror, because instead of humanizing something, you can monster-ize something and really attack it and look down the barrel at things that you’re afraid of.”

Gavankar, 39, spent her childhood and teen years training to be a classical musician, studying classical voice, piano and percussion with the intention of pursuing it as a professional career. But a role as Maria in her high school’s production of West Side Story (“every brown girl’s dream”) set her on a new trajectory, and she entered college as a theater major. Shortly after, she was signed to a recording deal by Cash Money Records as part of a girl band and went to Atlanta to artist development camp, where she cut a whole record. As the band broke up, Gavankar decided to come to Los Angeles, where she quickly booked her first proper oncamera acting role, on The L Word playing Papi.

Since then, the actress has racked up a long list of credits, working on projects in film, TV and gaming, including the Sleepy Hollow series, the Star Wars: Battlefront II video game and 2018’s Blindspotting film. She’ll next be seen opposite Ben Affleck in The Way Back, out March 6.

She also inadvertently found herself in the spotlight in December when a candid photograph she took of her friend became headline news — the friend was Meghan Markle, whom she has known for years in the acting world, and the photograph was the official Christmas portrait used by the Duke and Duchess of Sussex. Gavankar deflects any questions about the British royals, who navigated a historic decision to step down from their royal posts to live as private citizens. Asked if she and Markle might work together in the future, she replies: “I have a few lifers — friends that are chosen family and will be for life — and Meghan’s one of them. And she is one of the most brilliant people I know, and we both have long lives ahead of us, and we’re both very creative people, so anything could happen.”

Stucco got its wheels when Gavankar and Schelling entered it in a competition from camera lens makers Zeiss — a competition that Gavankar’s friend had found out about and casually mentioned to her. Zeiss was looking for a script that would showcase its premium lenses. “I knew exactly which one to submit,” Gavankar said, laughing. The duo won the competition and Zeiss partnered with Red cameras to provide them with top-level filming gear. And then, Gavankar says, she had to come up with the rest of the money.

This led to another moment of serendipity. Gavankar was cast as a supporting character on Apple’s The Morning Show, playing news reporter Alison Namazi, alongside Jennifer Aniston, Reese Witherspoon and Steve Carell, and was able to use some of her earnings from the show to fund the rest of Stucco, whose grand total was under $50,000.

“Who has [thousands of dollars] to spend on a their own film? Nobody! You know who does? Artists who are terrified of never being able to feed themselves [and] who are children of immigrants,” she joked. “I just hold on to every dollar that I have so that I can pay for my own art, because in the many years I’ve been in this business, I’ve realized that if you wait for somebody else to give you the opportunity, it’s not going to happen.” 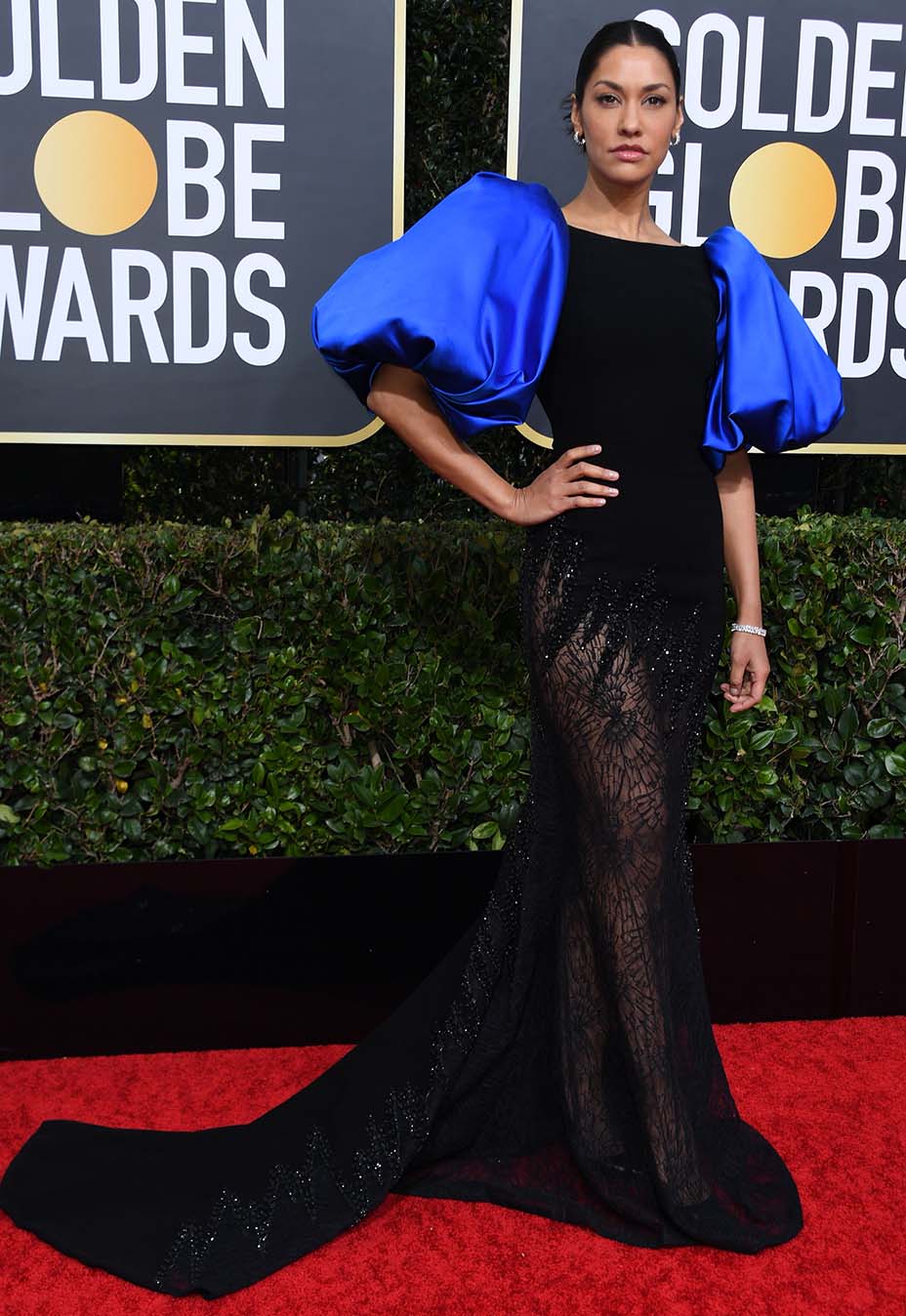 Gavankar was able to recruit many of her artist friends and collaborators — Debra Messing, Aisha Tyler and Blindspotting co-star Rafael Casal are among the cast — to tell the feverish tale that Gavankar believed she needed to show in order to sell her skills as a filmmaker.

“It’s one thing to have directed and produced music videos and taken them to festivals, but it’s hard to make people believe you should be taken seriously as a filmmaker without a narrative piece,” she explained.

Gavankar and Schelling rushed to make Stucco while she was simultaneously shooting The Morning Show and The Way Back, getting notes from people like Affleck and The Way Back director Gavin O’Connor. One of the more challenging scenes was figuring out how to make a sequence work that involved Gavankar getting intimate with a hideous monster-esque tongue jutting out of a wall.

“One day I was crying in a car with Ben [Affleck], the next day I would be in double Spanx cracking jokes with The Morning Show, and then I’d be in my trailer with Russo trying to crack how to make Stucco,” she said. “I was constantly pitching ideas to people, anyone who would listen, and I pitched the tongue sequence to Ben and the look on his face, the way he twisted his face up, and he cringed so intensely, I knew I had something. I was like, if I can get this dude to twist up that much at the thought, I’ve got something!”

The tongue (which is featured in the trailer; the full short film can be seen below) was a complex special effects trick within itself. Gavankar said she recruited special effects artist Frank Ippolito, known for his work on horror and sci-fi, to make the grotesque fleshy organ. He used four pulleys within the tongue to make it move, with two puppeteers behind the wall operating it. “Everyone on set was squeamish and making noises,” Gavankar said. 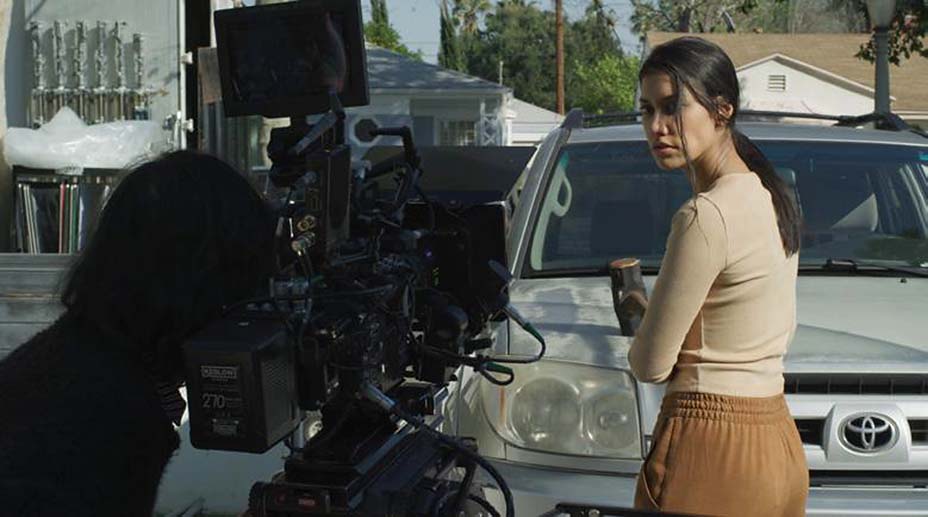 Being selected for SXSW’s shorts competition, where Stucco will premiere next month, was the validation that Gavankar said she and Schelling were hoping for to show their skill sets.

“The level of taste and the bar that SXSW sets for what gets chosen to compete is very high, and also, literally the motto of Austin, Texas, is ‘Keep Austin Weird,’ so they had a stake in the ground for interesting work,” she said.

“Our entire slate is we’re in the business of getting things produced, we’re not just trying to be weirdos. We’re trying to actually engage with the industry in making them. We know that we want to make something that will be seen by the mainstream audience but isn’t necessarily following all of the rules of everything that’s come before.”

Watch Stucco in full below.