On the runway, many of the models were personalities in their own right, including the recently married (and all-smiles) Miranda Kerr, Hailey Baldwin and Presley Gerber, all signed to IMG Models, which is part of the WME-IMG fashion-entertainment juggernaut that also represents Scott. (WME-IMG co-CEO Patrick Whitesell was also in the seats at the show.) 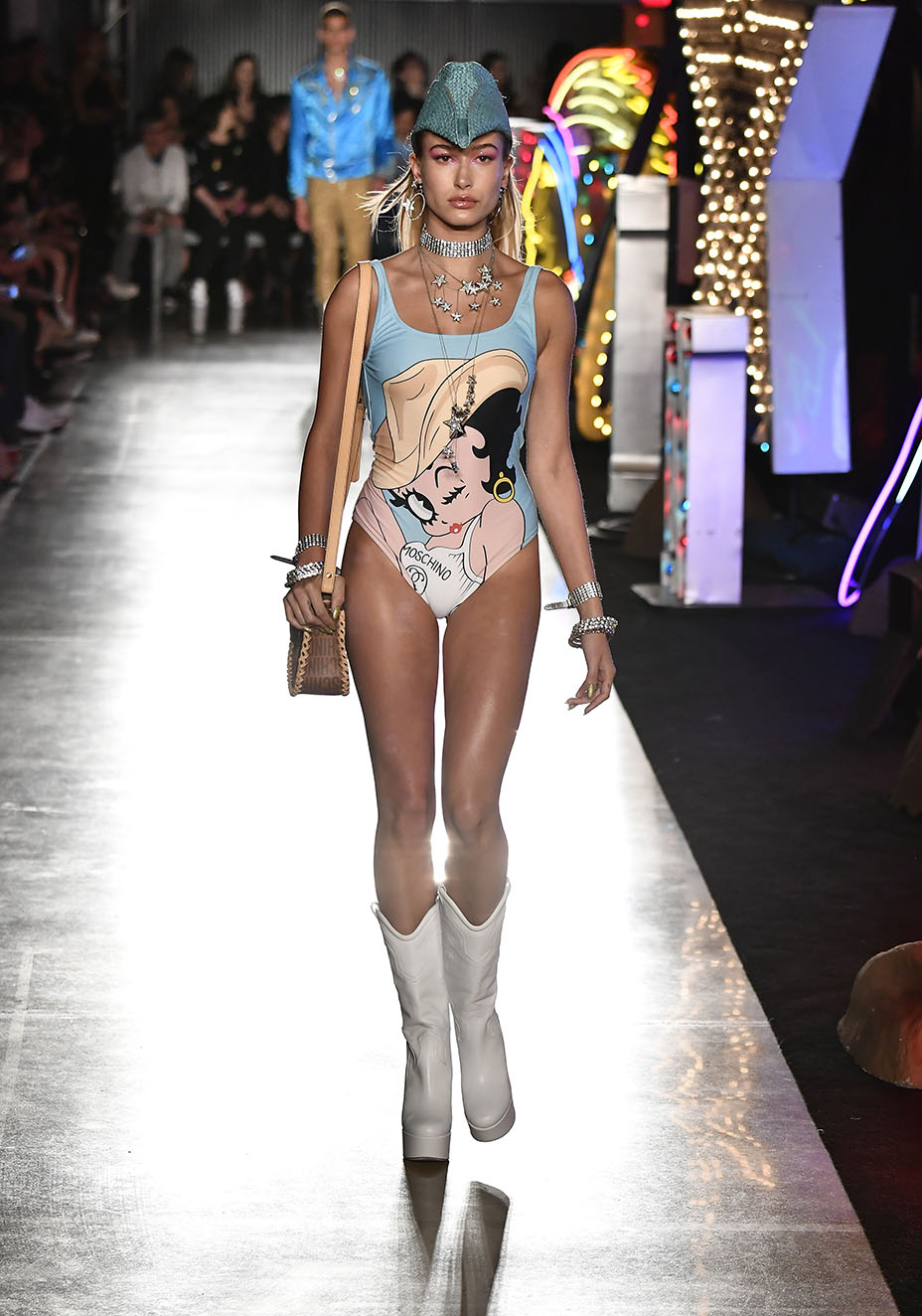 It was a homecoming for the designer, who is based in L.A. when he’s not jetting back and forth to Milan, where he usually shows the Moschino collection, or to New York, where he shows his namesake Jeremy Scott line.

A fixture of the L.A. fashion scene since the early 2000s, Scott won over the hearts and wallets of the sneakerhead generation when he began collaborating with Adidas Originals in 2008, and he continued to rocket to international fame in recent years with exposure from high-profile pop-music pals like Katy Perry (he made all of her 2015 Super Bowl halftime-show outfits) and Miley Cyrus (he dressed her for her hosting duties for the 2015 MTV Video Music Awards). He got the Moschino gig in 2013.

“It’s heaven to be home,” Scott said backstage ahead of the show, where his L.A. family of well-wishers ranged from Arianne Phillips, Madonna’s stylist and Nocturnal Animals costume designer, to music-world wardrobe designer Michael Schmidt (who, like Scott, is a native of Kansas City, Mo.), to vintage-clothing dealer/restorer of architectural homes Mark Haddawy, who did the work on Scott’s two John Lautners in L.A.

“This is the megaphone to the world and always has been,” Scott said, reflecting on the important role L.A. has played in his success.

Featuring a cast of pop culture characters including Betty Boop, Gumby, SpongeBob and Olive Oyl as design motifs, the collection was inspired by “Americana and a road trip from Los Angeles to Las Vegas,” Scott said, citing influences that ranged from pinups to off-duty showgirls. 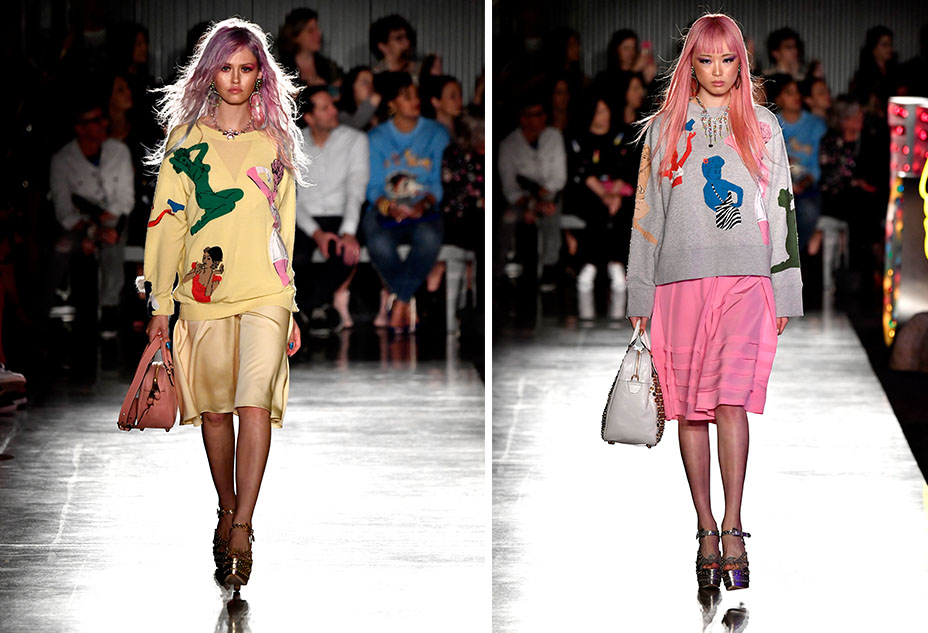 “Betty Boop is the original pinup, before there was Bettie Page or Betty Grable,” said Scott. “Then I thought, ‘Wouldn’t it be fun to make a string bean like Olive Oyl into a Playmate?’ “

audience literally gasped and then cheered when everything lit up at @Moschino show ?? #moschinohollywood pic.twitter.com/DWNqqrRpj1

Scott’s clothes have never looked better on the runway. Maybe it was the context of seeing them in L.A., their spiritual home, but the embellished jeans, flame-licked tuxedos and 1940s slip dresses with pinup appliques struck the perfect balance between luxe and fun. 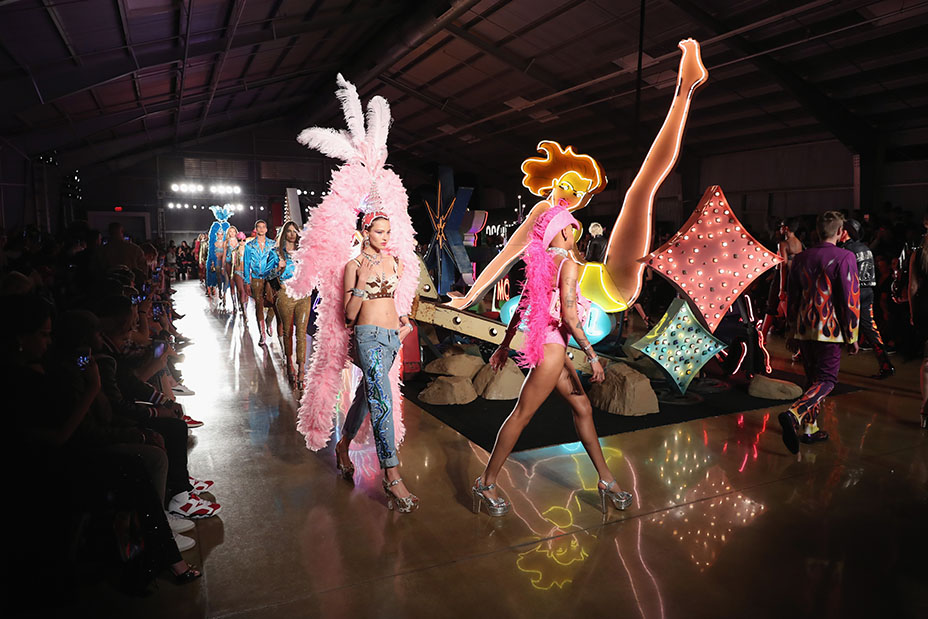 He brought back the bowling bag, emblazoned with “Moschino,” of course, and cowboy boots, too. For evening, spangled bustier tops worn with jeans, and fringe-trimmed cocktail dresses riffed on showgirl costumes. 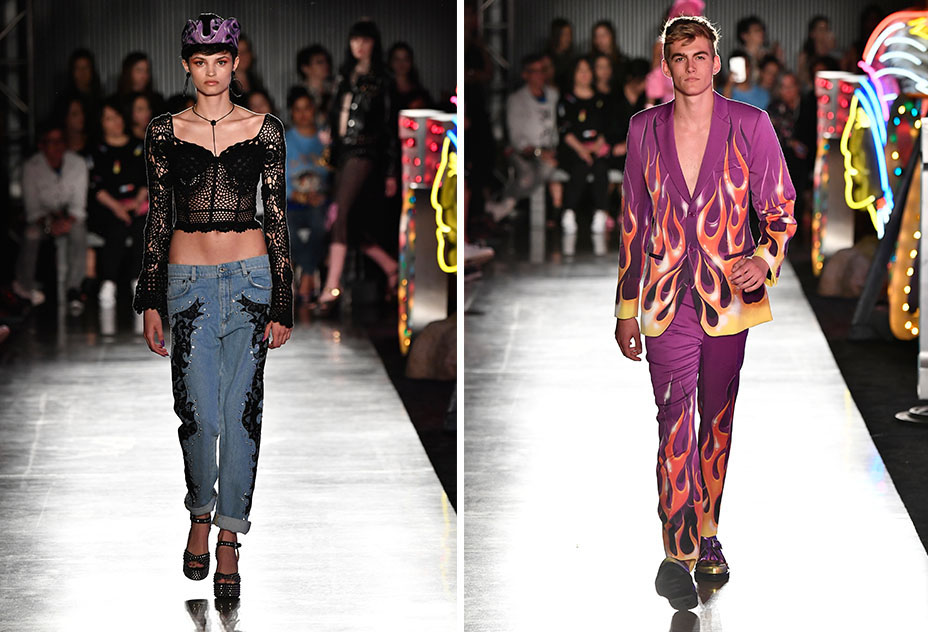 Afterward, real-life showgirl and longtime Moschino fan Dita Von Teese, dressed in a black-leather biker-style Moschino corset gown, gave the collection her stamp of approval. “I love the kitsch factor. I built my whole career on kitsch,” she said. 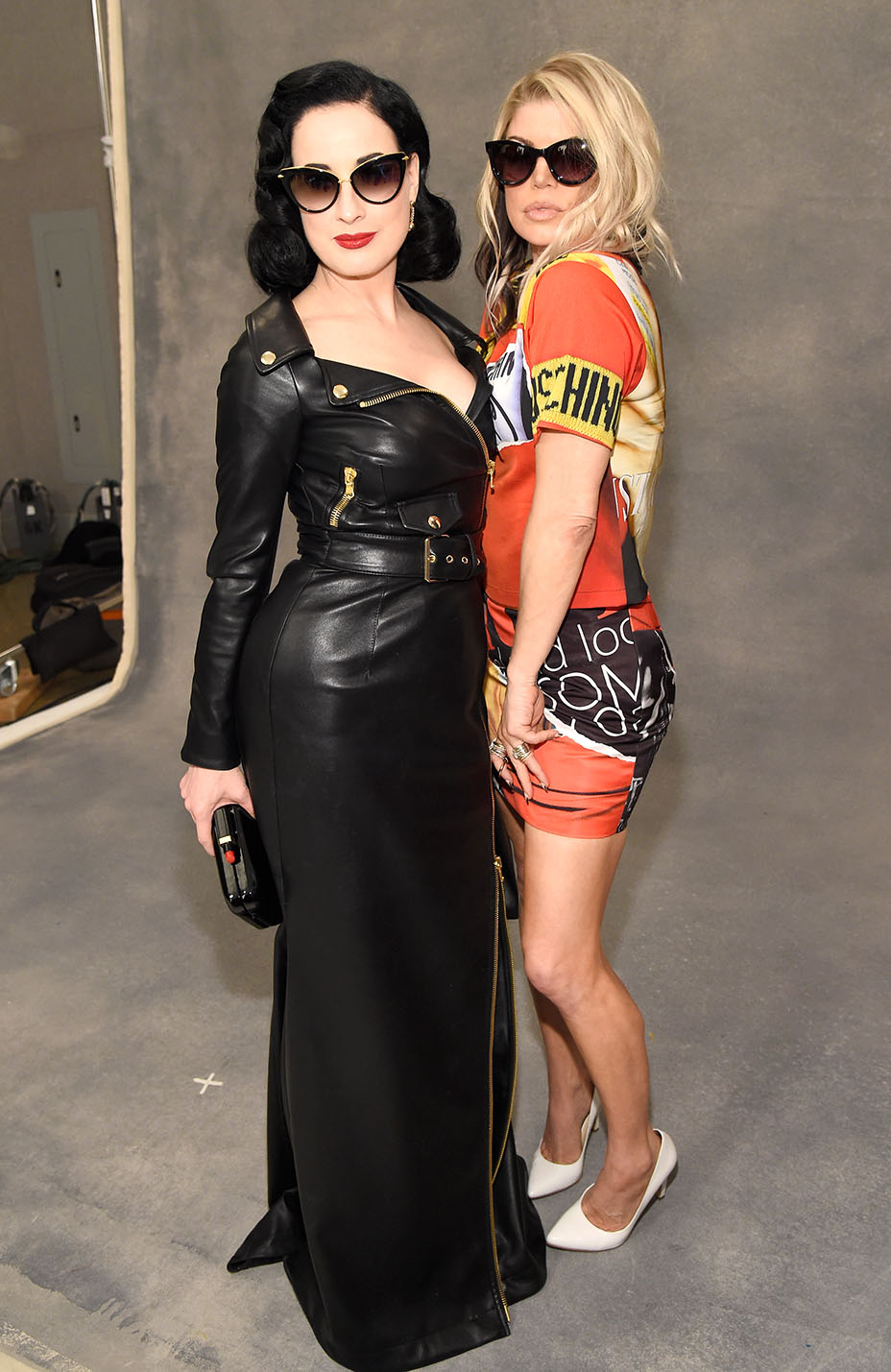 “I loved everything about it,” seconded Ross.

A cadre of Hollywood stylists — and their kids — also came out for the fun, including Jeanne Yang, Karla Welch, Joseph Cassell and Tara Swennen, whose 5-year-old, Jordan, was dressed head-to-toe in Moschino for her first fashion-show experience.

“A lot of stylists are bringing their kids tonight,” says @TaraSwennen with daughter Jordan, 5, (in @Moschino) outside #MoschinoHollywood pic.twitter.com/8XnUnB6lhJ

It was Westworld actress Angela Sarafyan’s first proper fashion show, too. “It was like going on an adventure ride,” she said afterward. And she should know. 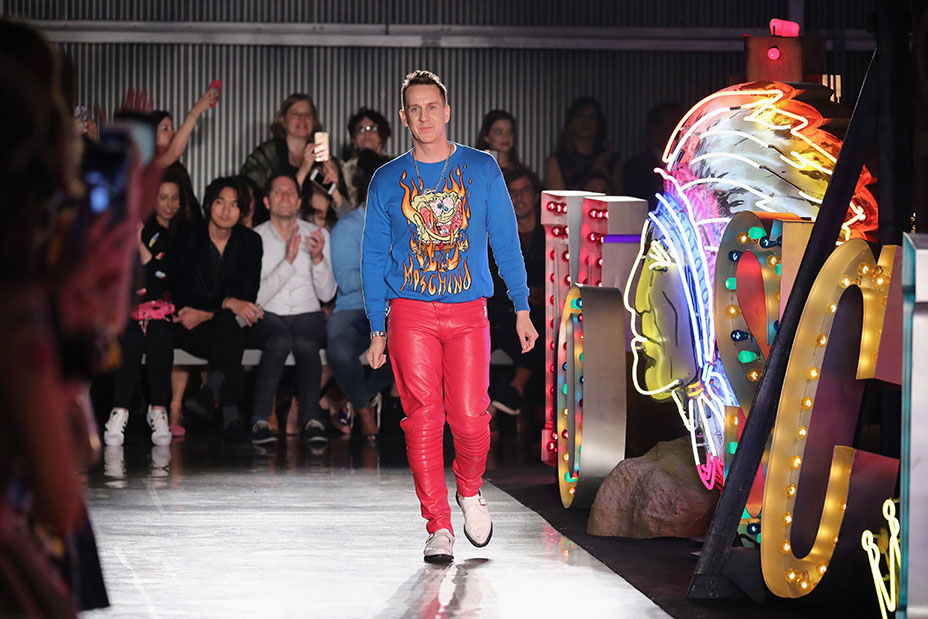