What is it with the Public Theater and Joan of Arc? After producing David Byrne’s cringe-inducing alt-rock musical treatment Into the Fire last year, the august downtown company now dishes up Jane Anderson’s Mother of the Maid, a historical drama so clunky and tonally confused it sometimes plays like a Saturday Night Live sketch in search of a punchline. After last season’s underpowered Broadway revival of Shaw’s Saint Joan, the Maid of Orleans is getting torched all over again on New York stages.

This stunningly minor play, first seen three years ago at Shakespeare & Company in Lenox, Massachusetts, with Tina Packer in the title role, has been unearthed as a vehicle to reunite the estimable Glenn Close with her screenwriter on The Wife. But despite the stage veteran’s vigorous, always commanding presence, all she really needs here is a corncob pipe to transport her from 15th century France to the hayseed world of Ma Kettle.

The idea of retelling the Joan of Arc story from the perspective of her mother is an intriguing one in theory. The main claim to fame of Isabelle d’Arc is that after her daughter was burned at the stake in 1431, this uneducated, by then widowed peasant woman from rural northeastern France petitioned the Pope to reopen Joan’s court case. She then addressed the appellate trial, which got her daughter’s conviction on heresy charges overturned.

That achievement remains the most interesting thing about her, but rather than being dramatized, it’s related here with some poetic license by Isabelle in folksy third-person narration, a device that Anderson uses with tiresome frequency. “Isabelle Arc is a god-fearing woman,” she says as the play opens. “She can neither read nor write and her skirts smell ripe as a cheese.” Ew.

Matthew Penn’s handsomely appointed production has one affecting interlude close to the end, when Isabelle is granted access to Joan’s cell. She tenderly bathes and dresses her daughter, cradling her with comforting words before the convicted prisoner is torn from her arms to be executed. That intimate scene is played with delicacy and stirring feeling by both Close and Grace Van Patten as Joan. But elsewhere the play is dull, prosaic and blighted by misplaced comedy, while Van Patten’s performance is generally far less effective.

Anderson has built an entire career writing perceptively about women across theater, film and television, often reframing extraordinary lives in terms more relatable to common experience. That applies whether it’s the gifted writer played by Close in The Wife, whose literary talents pose too much of a threat to her husband to be pursued; the mother whose ambitions for her daughter drive her to crime in the wickedly enjoyable Holly Hunter telemovie, The Positively True Adventures of the Alleged Texas Cheerleader-Murdering Mom; or the dissatisfied small-town schoolteacher in the exquisitely contemplative Olive Kitteridge, played by a superlative Frances McDormand. 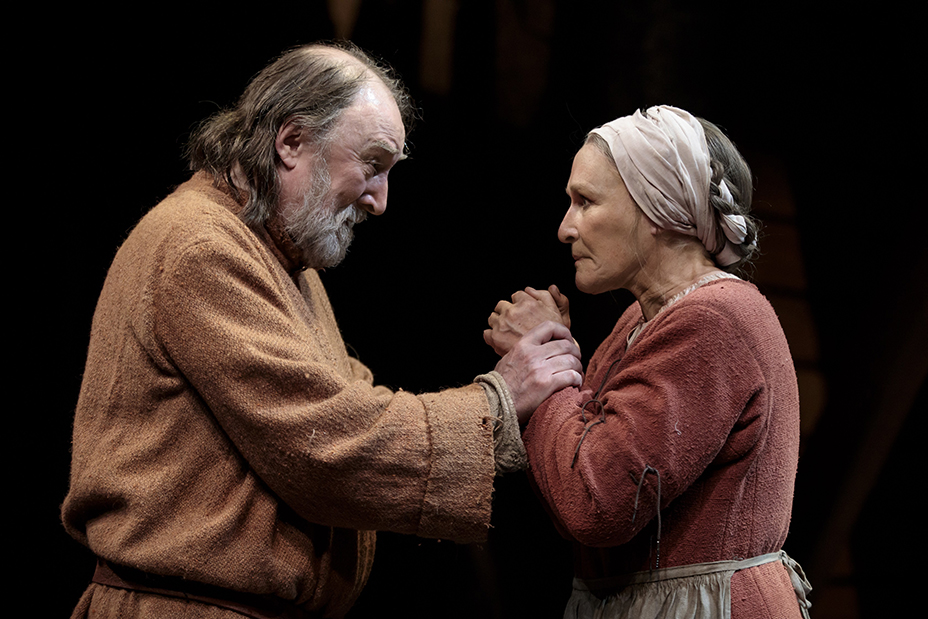 Clearly, the writer is aiming in this play to peel away the legend and simply tell the story of any parent losing a child — in this case one forced to stand by and watch as her daughter seizes her independence and then brings about her own downfall by fighting for a cause in which she passionately believes. The push to make it relatable would explain the jarring contemporary language and attitudes that keep lifting us out of the Middle Ages. When Van Patten comes galumphing onto the stage shouting “Hey, Ma!” she’s more like Joan of Brooklyn.

There’s a reason dramatized accounts of the Joan of Arc story tend not to loiter long on the sheep farm in Domremy. Once it’s established that St. Catherine has instructed Joan to take on the English invaders and lead France out of the Hundred Years’ War (“I’m havin’ holy visions, Ma!”), her family become bystanders. Her father Jacques (Dermot Crowley) tries beating some sense into her; the local priest (Daniel Pearce) pats her on the head, attributing her claims to the impressionable nature of young girls; and her brother Pierre (Andrew Hovelson) enlists in her army and enjoys the perks, but is destined to play a minor role.

That leaves Isabelle, who by this account, took Joan at her word and offered her loving support, walking 300 miles to see her and even getting caught up in the excitement (“Look at me! I’m the mother of the Maid!”) until things turn bad with Joan’s capture by the English.

Close approaches all this with an integrity and seriousness that the play seldom earns, even veering gamely into broad comedy in moments such as Isabelle getting her first taste of honey mead out of real glassware. It’s frustrating enough that we’re stuck on the farm when the action is on the battlefield, but somehow it gets worse when Isabelle arrives at the Dauphin’s castle and starts conversing with a lady of the court (Kate Jennings Grant), who responds to her plain-spoken hick frankness by exclaiming, “Oh how fabulous! I adore you!” Seriously. The play’s depiction of the class divide is so banal it comes off as silly.

There’s little subtlety or nuance in the writing, which acquires some belated dramatic weight only in the aforementioned scene immediately prior to Joan’s death. And not only does Isabelle get stuck with narrating far too much of her own story, but Jacques and Pierre are required to pitch in on that front too. This mostly inert play could almost be an audiobook.

Director Penn creates the occasional striking stage picture against the dark wooden beams of John Lee Beatty’s set — notably when Isabelle first encounters her daughter after a long absence as Joan emerges from a castle doorway in a halo of light, as if already canonized in her mother’s eyes. (Lap Chi Chu’s lighting is beautiful throughout.) But even with a voice as expressive as Close’s relating her character’s devastating loss and her feisty refusal just to fade quietly away, Anderson fails to make a case that this is Isabelle’s story to tell.