Following the events of Milk Wars — the comic book storyline that brought the DC Universe and Gerard Way’s Young Animal imprint together for the first time —  the vigilante Violet Paige has discovered that her home isn’t her home anymore…literally.

In the new series Mother Panic: Gotham A.D., which launches this week, Violet finds herself in an alternate version of Gotham City 10 years in the future, where the Dark Knight has been missing for years and the city has gone to hell as a result. Under the influence of the Collective, Violet’s adversaries from the Gotham she knew, the city has become a more organized, more controlled place, leaving little space for costumed vigilantes…especially those like Violet’s alter ego, the titular Mother Panic.

Heat Vision talked to the series’ co-creator, writer Jody Houser, about updating the iconic backdrop of Batman’s adventures, as well as re-creating the series she’s written for the last year without rebooting everything along the way.

The first issue demonstrates the ways in which Gotham A.D. is a relaunch of Mother Panic, but not a reboot of it. Violet is the same as before, and manages to be the throughline for longtime readers in a way that she wasn’t before. Whereas before, she resisted being a point-of-view character, in the first issue of this new series, she guides the reader through this new Gotham. It feels like you’re using the way that readers who have been reading for the last year have gotten to understand who Violet is.

We were definitely thinking about Violet trying to work out what the new Gotham was as an entry point to the new Gotham for the reader, but the contrast with who Violet was at the start of the first series was less planned on our part. I’m actually really glad it works out that way. (Laughs.) We did spend a year getting to know Violet, and how little she knows herself. I think she’s still insisting that she’s not a hero when she kind of is, but at least she understands she’s not going to go around killing people. She’s trying to be a little more of a good example on that front. We have a good grasp on who she is, and how she’s going to react to things resetting like this.

For people who have been reading the book for the year, they’re able to understand who Violet is, and so when she says something in the narration, they’re able to know how much she’s lying to the readers, and herself. It’s almost like a value add for longterm readers, even though new readers can take it on face value. But even for newcomers, it’s clear that this isn’t the regular Gotham City of the Batman comics.

I definitely wanted this to be a jumping-on point for someone who maybe just picked up Milk Wars and hadn’t read any Mother Panic before. You know, a new No. 1, you always want it to be new-reader friendly. But I think that people who’ve been following Violet on her journey so far will definitely have a richer reading experience because of that.

I hope, even, that people who have never checked out Mother Panic but have read a number of Batman books set in Gotham will get how off things are, beyond Batman himself not being around.

When did the idea of setting the new series in an alternate Gotham come up?

I know it came up when we were talking about what the Milk Wars event was going to be, and we came to the decision as a whole of Young Animal, that the books were all going to be shifted dramatically as a result of the event. The idea of dropping Violet into a whole new reality where her villains had won, after she’s been making the slightest bit of headway — to be honest, it felt very much like how Violet’s life would go. “I’m just starting to get a tiny bit of info on this, oh, they’ve won and destroyed everything.”

In some ways, this feels like an evolution of the approach of the series from the last volume. Mother Panic has always had its own ways of approaching the tropes and ideas behind the Batman mythology, but now you’re turning that up.

That’s one of the benefits of working outside of the main universe — you get to throw in all these elements that would have messed up the other books had we tried to this in the first year. We have a lot more tools at our disposal, it’s like the advanced class of Violet’s impact on Gotham, now we’ve gotten all the basics down about her.

What are some of the influences you’re drawing on for this new, 10-years-later version of Gotham City?

Batman Beyond was certainly a big one, which I love because I was a huge fan of that show — a lot of cyberpunk anime, anime was always a big influence on Mother Panic’s costume design, but shows like Bubblegum Crisis…. The branding we’re going for for the book — and I think it was [editor] Molly Mahan that came up with this — is “neon noir,” which is a statement about what we want the feel of the book to be.

How did you settle on that feel? You have a Gotham City that’s entirely yours, that you don’t have to share with other creators on other comic series. Is there some internal guidance that keeps you from going too far with all that power?

I think the main thing is to have a mental picture of the throughline that made the new Gotham what it is, even if that’s not obvious to the reader. When we’re bringing in characters and heroes from the “other” Gotham, the Batman universe, having them feel like they’re at the end of their journey after Batman’s been missing for a decade. What the changes in Gotham meant to them, not just, “Oh, it’d be cool if so-and-so was here!” I want to make it feel intentional and organic, and not gimmicky.

There are some twists that Batman fans will appreciate; you have a take on the Joker that’s very subtle. Where did that come from? Without Batman, he’s kind of shut down, but that just makes him all the more creepy.

I love writing creepy things, so that’s part of it. (Laughs.) One of my favorite Joker stories is a Batman story called “Going Sane,” where he thinks he’s killed Batman and kind of forgets he’s the Joker. He starts looking like a normal person, he goes out and gets an office job, and falls in love with a very normal woman and gets engaged and just wipes the Joker from his mind. Thinking about that story, that’s where he thinks he’s killed Batman, but what happens when he doesn’t know what’s happened to Batman? He’s just disappeared, and the Joker doesn’t know what happened to him. It’s the idea that he could never get that happy ending, if you want to call it that; he doesn’t get a resolution, and instead he just withers away.

The most obvious Batman element to talk about is Rosie, who is Robin in the way that Mother Panic is Batman; you can recognize the archetype, but she’s a very different character. Where did Rosie come from?

The idea that we were going to have this kind of sidekick school in our Milk Wars issue came up very early, and again, it might have been Molly that suggested we keep Rosie along, because Rosie and Violet are both flower names, which I hadn’t pegged on when I named her. I really loved that idea, that Violet should have a sidekick, because Violet should really not have a sidekick. She’s not someone who should be responsible for a small child.

The funny thing is, if Violet focused on Rosie the way she focuses on her [missing] mother, I think she’d actually be a really good caretaker, but she has it in her head, “I shouldn’t be the one taking care of a kid.” Again, it’s the element of Violet being capable of a lot more than she thinks she is. Hopefully she’ll figure it out before too long.

You’re working with Ibrahim Moustafa on this series, and his style feels, again, like an evolution of the visual identity of the book so far — there are scenes where you can see echoes of both Tommy Lee Edwards’ and Shawn Crystal’s work in the first volume. What’s it like working with him?

I love working with Ibrahim. He’s said he was a fan of the book before working on it, and then when they asked him, he was thrilled. It’s great to have someone coming from the perspective of a reader and knowing what worked for him, on the other side, that’s really helping inform what he does with the storytelling. And like you said, he’s a really good fit and a natural evolution from the artists we worked with on the first year of the book. He has that kind of realism, but also a classic comic feel and his own stylized version of everything that I really love.

Mother Panic is a very subtle book, and especially in this new series, there’s so much to dig into that rewards multiple readings. Is this a heavy book to work on, in terms of the amount of planning needed?

It’s hard to say, because I definitely am a dense writer for all my projects. Mother Panic was one of the first ongoing series I ever worked on, and I think when I was trying to get my feet wet with a title that wasn’t an adaptation or coming from something else, and I feel like, coming from that world, where I did have to write very densely, to bring everything in that we needed to fit into the issue, I got in the habit of writing very densely. I love doing that, I love being able to put a lot of different elements of the story into the issue. At the end of the day, I want everyone to feel like they’re getting their money’s worth with each issue, so as much as we can fit in, the better.

This new series feels like a very Jody Houser book, if that makes sense. You’ve written a lot of different things — you still are, right now you’re writing this, a Star Wars series for Marvel, Spider-Man and you’ve just been announced for Doctor Who with Titan — but this feels like something that is very particularly yours, even more so with this new series compared with the last volume, which was co-created with Gerard Way. Do you feel a sense of added ownership over Mother Panic: Gotham A.D.?

I think we always want to feel a sense of ownership over the thing we’re working on, because it’ll give us more freedom to take risks and do weird things, but I think in the case of Gotham A.D., there’s the ownership of this entirely new version of Gotham that only exists as far as we’re willing to create it. I think, on my part and Ibrahim’s part, I think we’re pushing even more than we did in the first volume where we were working in the shared universe. This definitely does feel a Jody book. It’s kind of twisted, weird, but also funny in a kind of dark way. (Laughs.) And maybe a little violence. That definitely feels like something I’d write. 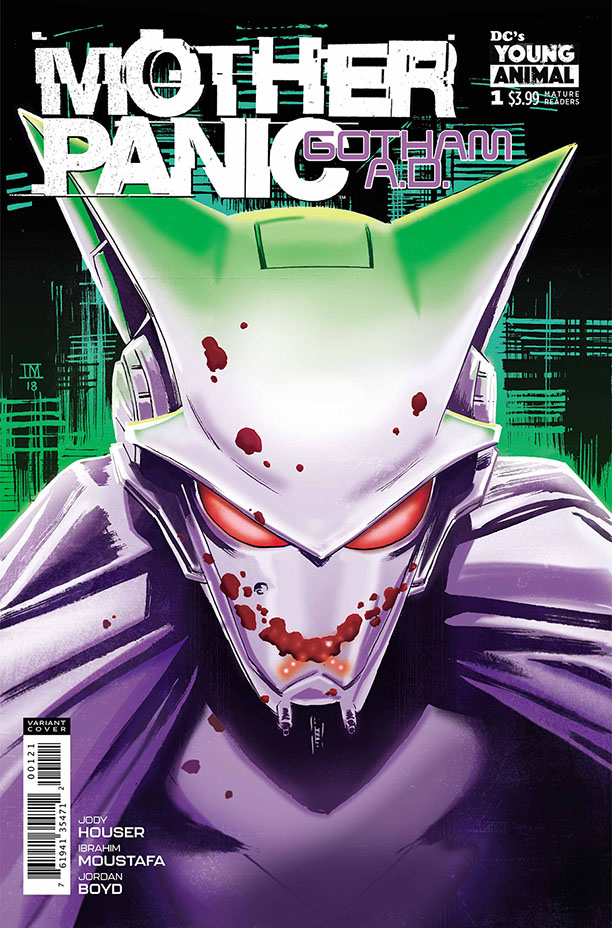 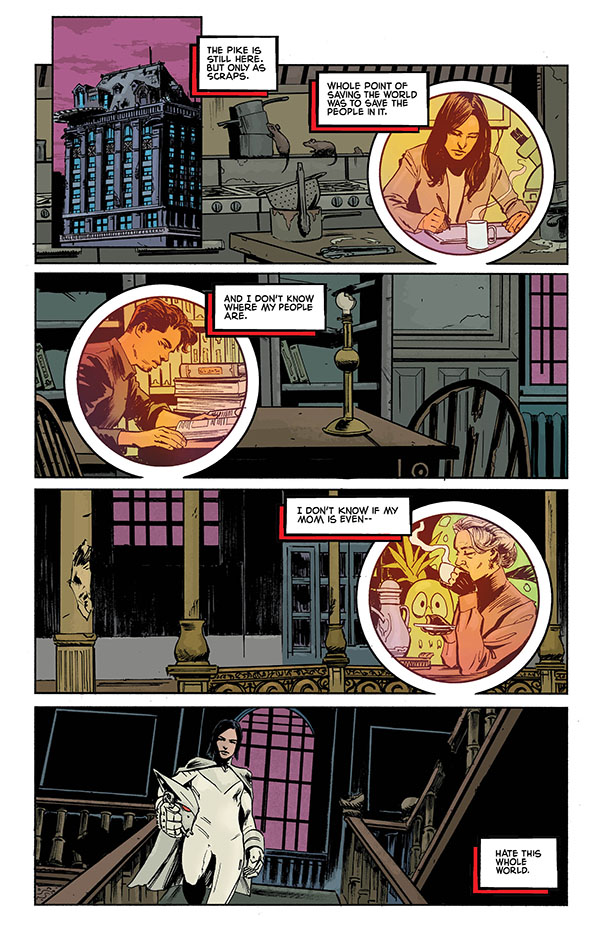 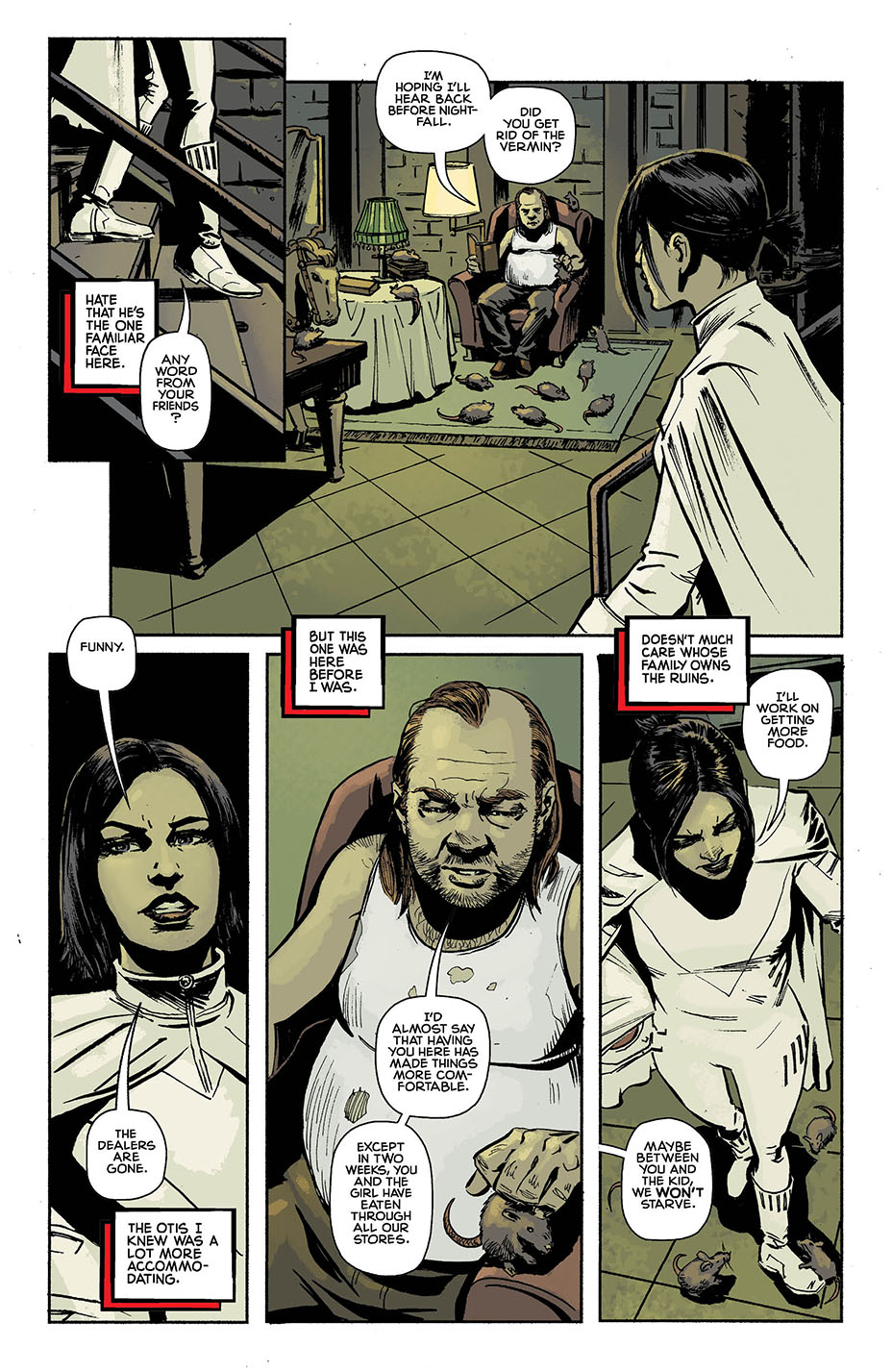 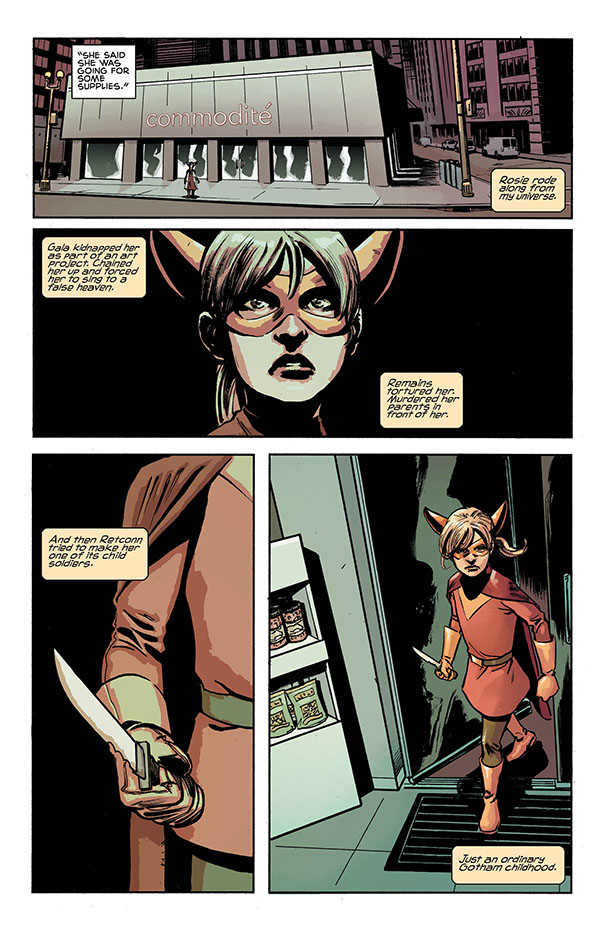 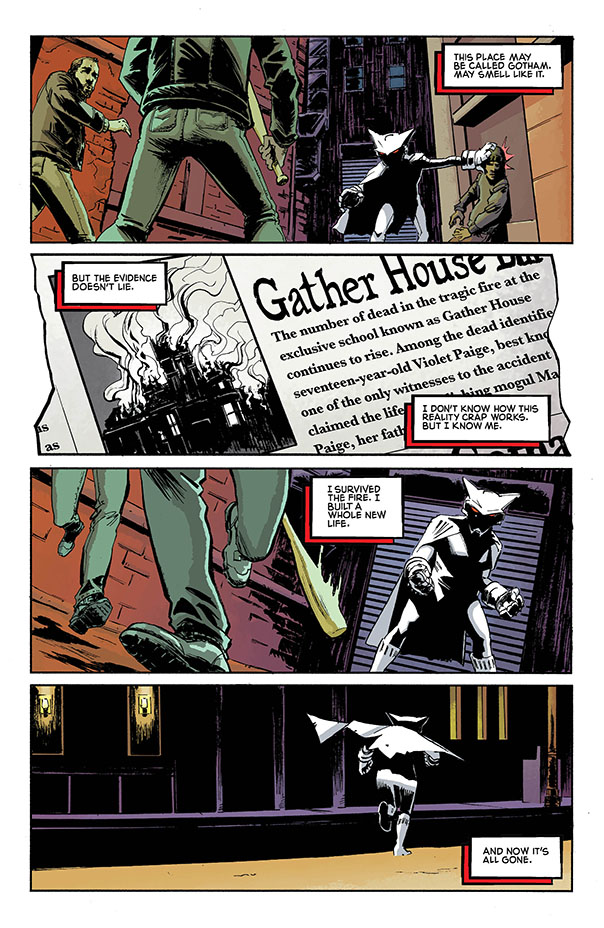 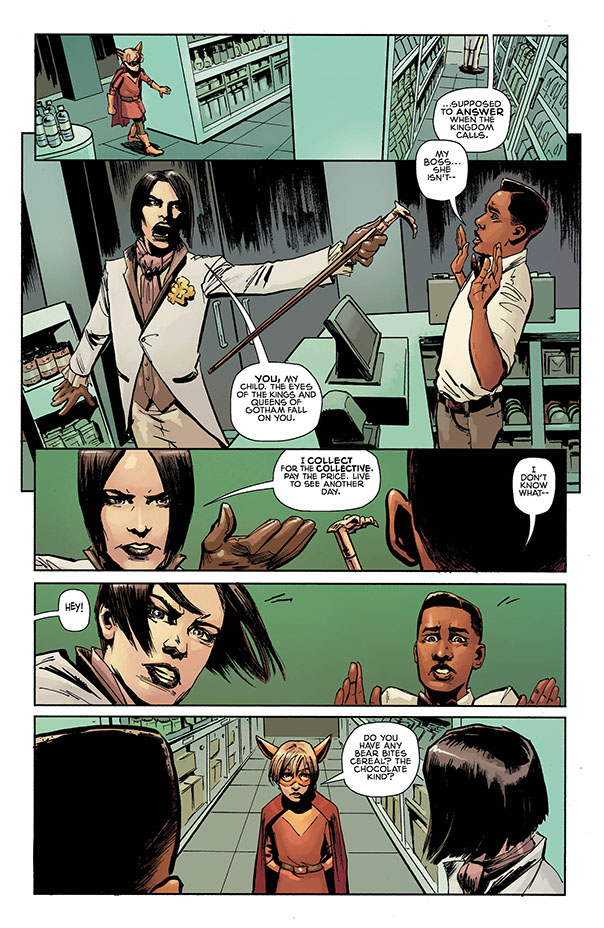 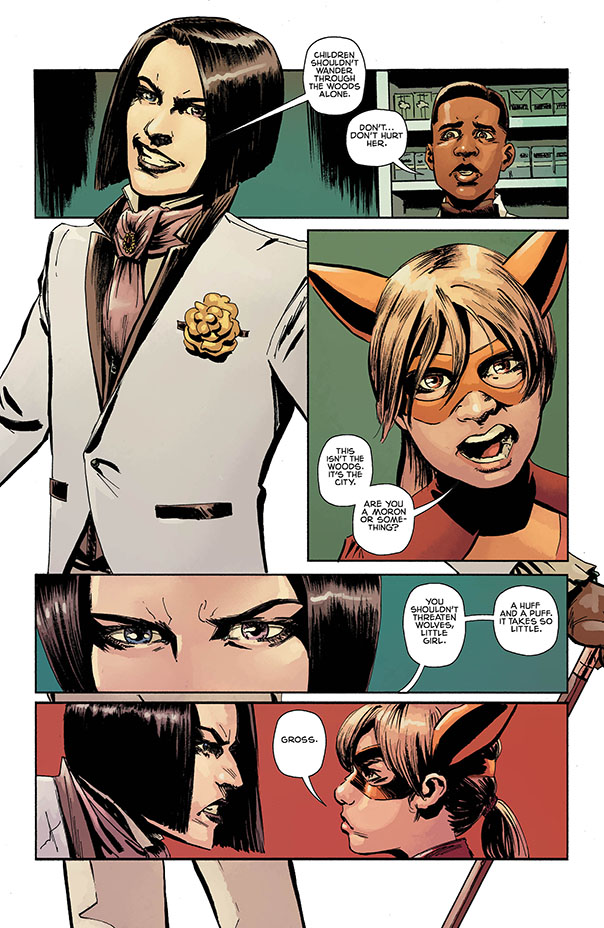 Mother Panic: Gotham A.D. No. 1 will be available in comic stores and digitally March 28.