This spring, a resounding 83 percent of MoviePass patrons were more satisfied with the company than with any other monthly subscription service (think Netflix).

Four months later, that number has plummeted to 48 percent, according to a follow-up survey by National Research Group. And nearly half of the MoviePass customers polled, or 47 percent, are considering canceling their membership — ranging from “very” to “somewhat” likely — while 37 percent say they are sticking around.

The first NRG poll was conducted for The Hollywood Reporter when MoviePass was flying relatively high. The now-embattled company had seen its subscriber base quickly exceed 2 million before approaching a reported 3 million after offering moviegoers a chance to see one movie a day for the low price of $9.95 per month (at one point, it even dropped to $6.95).

Now, MoviePass appears to be on life support after bleeding money. In late July, the company raised its monthly price to $14.95 and began limiting first-run movies.

Days later, the rules changed yet again. MoviePass announced it was keeping its monthly fee at $9.95, but reduced the number of titles a patron can see to three per month. That applies to those who have paid for an annual subscription.

“MoviePass’s innovation was offering the freedom and flexibility to see any movie, at any time, at almost any theater, for a low price,” says NRG CEO Jon Penn. “By constantly changing the terms of service — limiting which films subscribers could see and when they could see them — MoviePass has eroded brand trust and undermined their leadership position.”

In mid-August, NRG surveyed 1,558 moviegoers about MoviePass and other movie subscription plans. Those polled included 424 MoviePass customers, and 100 consumers who had recently canceled their MoviePass subscription.

Half of those who canceled had done so in the month prior to the NRG poll. The chief reasons for doing so were continual rule changes and not being able to see a movie of choice. For those who remain, brand problems and negative headlines have left many feeling that MoviePass isn’t reliable or trustworthy, according to NRG.

It’s unclear how many subscribers the service presently has, or how many it has lost.

Wall Street remains skeptical as to MoviePass’ future, the proof being that shares of parent company Helios and Matheson Analytics have been decimated, probably killing any chance that it could raise $1.2 billion to grow MoviePass through acquisitions, a goal it had outlined in an SEC filing.

Even a one-for-250 reverse stock split on July 24 didn’t help matters, as shares have sunk from $20 apiece since then to just 2 cents on Monday, and the stock again faces the possibility of being delisted from Nasdaq.

Despite MoviePass’s recent difficulties, the NRG survey found there is still a healthy appetite for movie ticket subscription services, with 39 percent of moviegoers expressing definite interest in a sustainable plan. One example: Twenty-three percent of the total pool polled by NRG said they are in favor of AMC Theatres’ $19.95 monthly plan allowing customers to see three movies per week in any format. 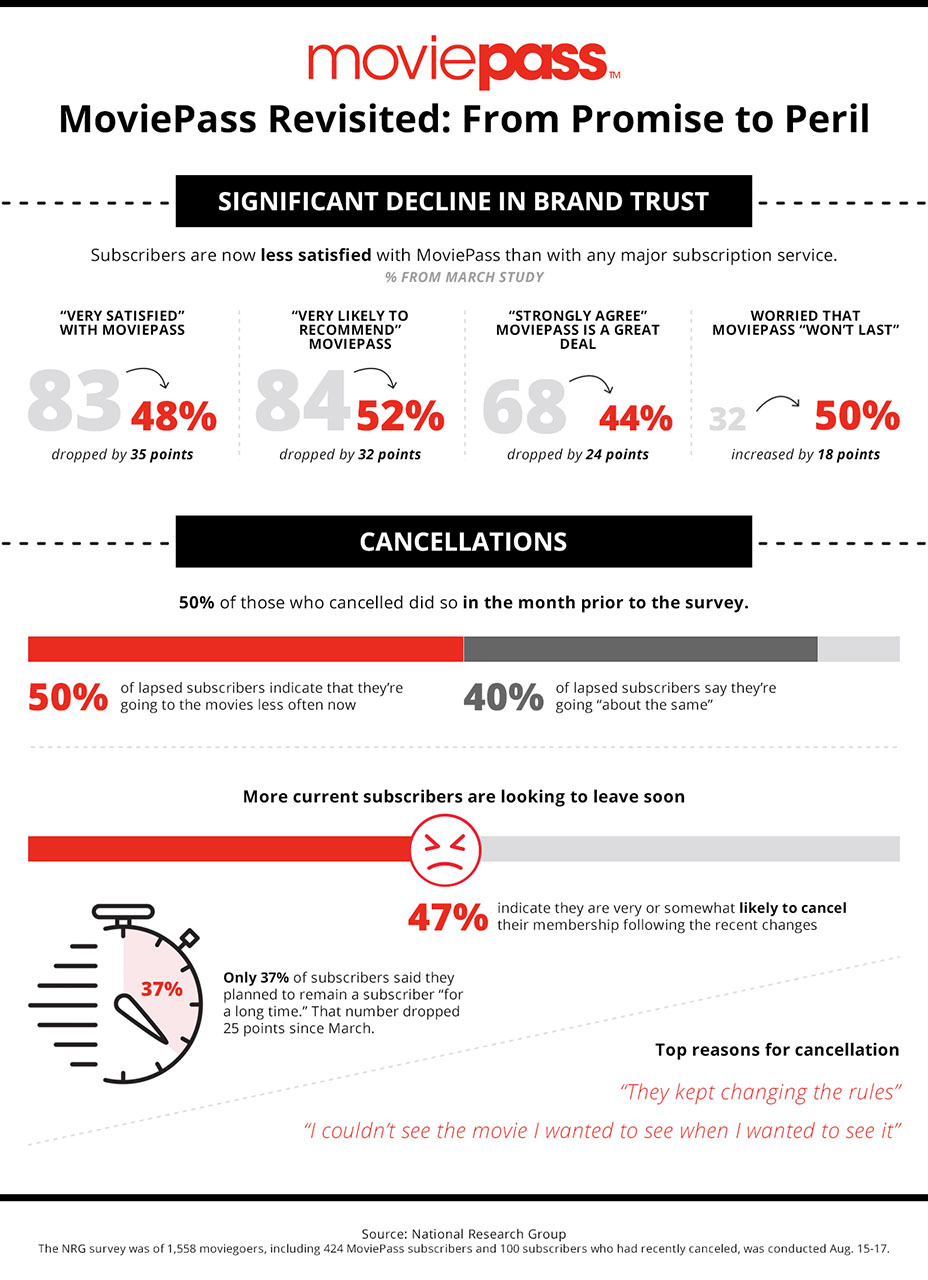