On a recent June afternoon, a splashy commercial for Artemis Fowl, a big-budget sci-fi movie Disney+ inherited from one of the company’s theatrical divisions, aired on ESPN during a 28-year-old rerun of a Michael Jordan NBA game. In late May, when Warner Bros. premiered the second trailer for Christopher Nolan’s Tenet, the studio bypassed television altogether and debuted the spot on the popular online game Fortnite.

As Hollywood prepares to begin releasing movies in theaters again, possibly as early as July, studio marketers are having to get creative to reach audiences since the COVID-19 pandemic has wiped out in-theater trailers and live-sports advertising, the top avenues for promoting a film.

What studios now have to sell viewers is an unusually complex message — not just a film but the idea of moviegoing itself. And there is the issue of striking the right tone in a moment when audiences are living with the grim reality of a global pandemic, civil unrest over police violence and economic devastation.

“Movies are still escapist, and people want to get away more than ever,” says Russell Schwartz, an ex-marketing exec at Relativity and New Line Cinema who now teaches at AFI and Chapman College. “But now the marketing effort will be 20 seconds to sell the movie and 10 seconds to sell the audience on the idea of even going to the theater.”

In pre-virus times, the Tenet trailer would likely have been tied to the NBA Finals, held during the first two weeks of June. Warner Bros. also would have bought billboards in Los Angeles, New York and other major cities across the country and globe.

But when the pandemic brought moviegoing to a standstill in the latter half of March, Hollywood began the largest calendar migration in its history, relocating titles to later in the year and to 2021. Now marketers of movies due this summer must map out their pre-release plans for films — which typically launch in earnest a month before movies hit theaters — in an unsteady environment where release dates may have to move yet again in response to local health conditions and government rules.

Amid these shifts, major Hollywood studios have spent 52.9 percent less to market movies on TV this year than they did during the same Jan. 1-May 28 period in 2019, according to iSpot.tv. In May, the traditional start of the summer box office, spending is down 98.7 percent from last year.

Meanwhile, the amount studios devoted to promoting home entertainment, a category that includes premium video-on-demand but not the streaming services, has jumped 87.4 percent year-to-date and 285 percent in May. Despite the advent of digital rentals, home entertainment has languished the past decade since the DVD market collapsed. Studios subsequently spent less on ads for a title hitting homes — until recently.

“The entertainment landscape is going through an evolution because of COVID,” says Stuart Schwartzapfel, iSpot’s senior vp media partnerships. “This has never happened. Home entertainment used to be a tiny piece of the pie. Is PVOD here to stay? It’s too early to say.”

Studios are hoping cinemas will reopen in time for late-summer tentpoles that include Tenet (July 17), Disney’s Mulan (July 24), Paramount’s The SpongeBob Movie: Sponge on the Run (Aug. 7) and Warners’ Wonder Woman 1984 (Aug. 14).

In a bold move, new indie player Solstice Studios recently moved up its Russell Crowe thriller Unhinged from early September to July 1 in hopes of riding a tsunami of publicity and being free from competition during what is normally one of the busiest box office corridors of the year. That was followed earlier this week by Sony’s decision to open the romantic-comedy The Broken Hearts Gallery on July 10.

While the challenges are formidable, there is an opportunity — the Unhinged trailer has 210 million media impressions to date, much more than the expected 50 million. “There aren’t 25 movies competing for attention,” says Solstice Studios chief Mark Gill, the former Miramax and Millennium Films executive. “What this tells you is people are looking for good news. They want to believe the world is coming back to normal.”

At the majors, marketing executives say their main challenge in the weeks and months to come will be convincing consumers it’s safe to return to theaters. Across social media, nearly a third of the conversation around the Tenet trailer was about the pros and cons of theaters reopening, instead of the movie itself.

“It’s really about the audience. I call it ‘mask-worthy movies,’ ” says one studio marketing chief. “Are people willing to put a mask on to see your movie?”

Poll after poll has found that consumers would be inclined to visit the multiplex if they could be assured certain safety measures are being taken, such as staggered seating and increased sanitation (35 percent of people recently surveyed by National Research Group said they would go to a movie today). The major theater chains are expected to spend millions of dollars on ads explaining what precautions they will take before flipping on the lights, while the National Association of Theatre Owners is enlisting top filmmakers for a series of PSAs.

The tenor of all advertising has changed drastically in the past two months. Instead of promoting products, many companies have created spots talking about the promise of tomorrow or what they’re doing to support frontline health care workers and promote social distancing. Hollywood also is likely to take a different approach than it usually would in trumpeting a certain storyline.

“Messaging is really tricky,” says one marketing veteran. “We might tweak campaigns to make them a little more positive and a little more fun. That’s what people want. They don’t want stress. They want escapism.”

Gill concurs, referring to an internal survey commissioned by Solstice. “One of the things we’ve found is that people are looking for something that causes them to heavily engage, whether it is the most romantic story or the most funny story or the most diabolical thriller. They just want to be distracted,” he says. “We did a poll, and the No. 1 genre in terms of forgetting the world was thrillers.”

Solstice is considering booking time on NASCAR, one of the few live sporting events on television. Warners also used NASCAR for a Tenet spot in late May, along with a special charity golf match featuring Tiger Woods, Phil Mickelson, Tom Brady and Peyton Manning. It also advertised on such programs as The Masked Singer and the Jordan documentary The Last Dance, which are both done for the season. The NHL is expected to return in mid-July and the NBA on July 31.

Once theatergoing does resume, studio marketers will face a new dilemma as Hollywood works to squeeze 18 months’ worth of product into one year.

“The next 12 months are going to be odd,” says Gill. “Next summer will be crazy and fiercely competitive.” 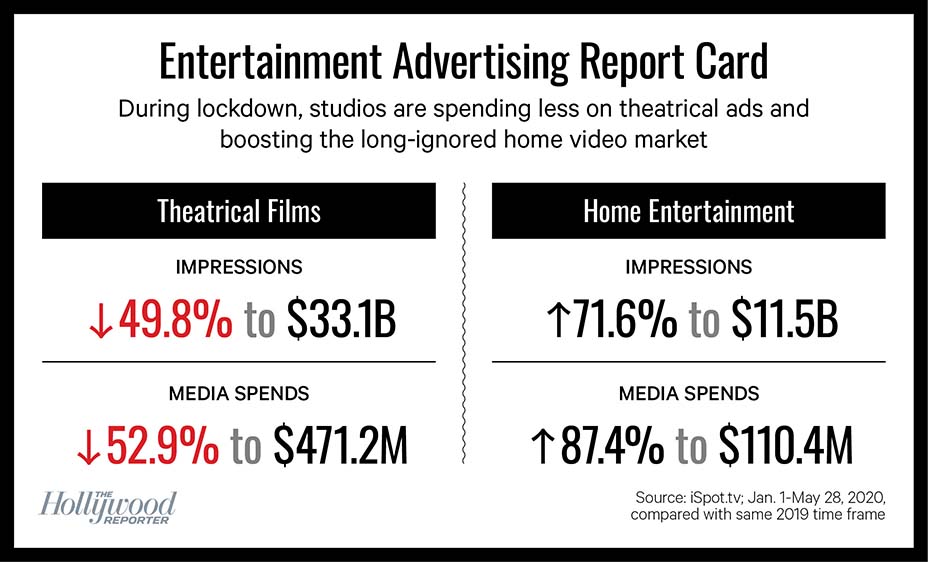