The Motion Picture Association of America — which represents Hollywood’s major studios — is giving a big shout-out to Netflix and other streaming services.

Breaking from tradition, newly installed MPAA chairman-CEO Charles Rivkin has decided to include home entertainment spending in the MPAA’s annual report on the health of the film business. Previously, the report focused solely on theatrical revenue. There’s good reason for the change-up, considering the explosion in digital subscription services, compared to the volatile theatrical market and the demise of DVD sales, once the jewel in the crown of Hollywood’s profit machine.

“Today’s home entertainment entertainment is exploding and there are no signs of slowing down,” Rivkin said Wednesday during a press call.

The U.S. portion of home entertainment spending was $20.5 billion — a 5 percent year-over-year gain — including $13.7 billion in digital spending, a year-over-year increase of 20 percent and up 110 percent from 2013. The spend on physical home entertainment was likewise down 15 percent in North America ($6.83 billion). Interestingly, online movie views and transactions decreased 11 percent year-over-year, while there was a 45 percent spike in online TV views, i.e., those watching streaming services, pay-per-view and other digital platforms on their televisions.

Internationally, the landscape was much the same. The digital spend was $18.5 billion, up 41 percent over 2016, while physical sales were down 16 percent ($8.9 billion).

Confirming numbers released in January, North American box-office revenue came in at $11.1 billion, down 2 percent from 2016, while attendance hit a 22-year low. Foreign revenue climbed to $29.5 billion, an uptick of 7 percent thanks mainly to the China box office, which, at $7.9 billion, was up nearly 20 percent. Global revenue was up 5 percent ($40.6 billion).

The MPAA’s members are the six major studios — Disney, Fox, Paramount, Sony, Universal and Warner Bros., all of whom sell their movies to streaming services, although the return is less than they would make on an individual movie rental or sale.

Studios and other film companies have a conflicted relationship with Netflix, which is also a producer and shells out huge amounts of money for original movies and television programming. Netflix has also irked theater owners by refusing to abide by theatrical windows when trying to play its original films in theaters.

“You might find oxymoronic for someone who represents theater owners to champion the home entertainment part of the report,” said National Association of Theatre Owners president John Fithian, who also participated in the press call. “Those same people who have the most technologies are also the most frequent moviegoers. We want our distribution and production partners to make more money in the home because they can make more and bigger movies for us.”

Fithian cautioned that streaming services also offer television programming, and that it is impossible to isolate movie viewing from TV viewing.

The MPAA is drawing its numbers from the Digital Entertainment Group, which includes figures from Netflix, Hulu, Amazon, HBO Go and CBS All Access.

“The story that unfolds on the following pages is a great business story,” Rivkin wrote in the intro to the report. “The strong and vibrant theatrical and home entertainment market is expanding on many fronts, constantly innovating to deliver an unparalleled experience to audiences worldwide.”

Rivkin, a U.S. ambassador during the Obama administration who previously worked at the Jim Henson Company, oversaw other substantial changes to the annual report, which has a new name, “Theme.” In compiling data on moviegoing habits and demographics, the MPAA’s survey was conducted online, versus the telephone. MPAA insiders say the online survey is especially important in terms of capturing younger moviegoers.

According to the report, the moviegoing audience in 2017 was more diverse, although comparisons to previous years is difficult because of the change in how the survey was conducted.

Those between the ages of 25 and 39 continued to be the most frequent moviegoers, followed by the 40-49 age group, reflecting the challenge Hollywood faces in luring younger consumers to theaters.

Among ethnic groups, per-capita attendance was highest among Hispanics, who went to the movies 4.5 times on average, and Asians (4.3 times). Of all tickets sold, 55 percent were purchased by Caucasians, followed by Hispanics (23 percent), African-Americans (12 percent), Asians (7 percent) and other (3 percent).

And more than three-quarters of the population in North America — 263 million people — went to the movies at least once in 2017, with the typical moviegoers buying 4.7 tickets. In regards to gender, the split was even among females and males. 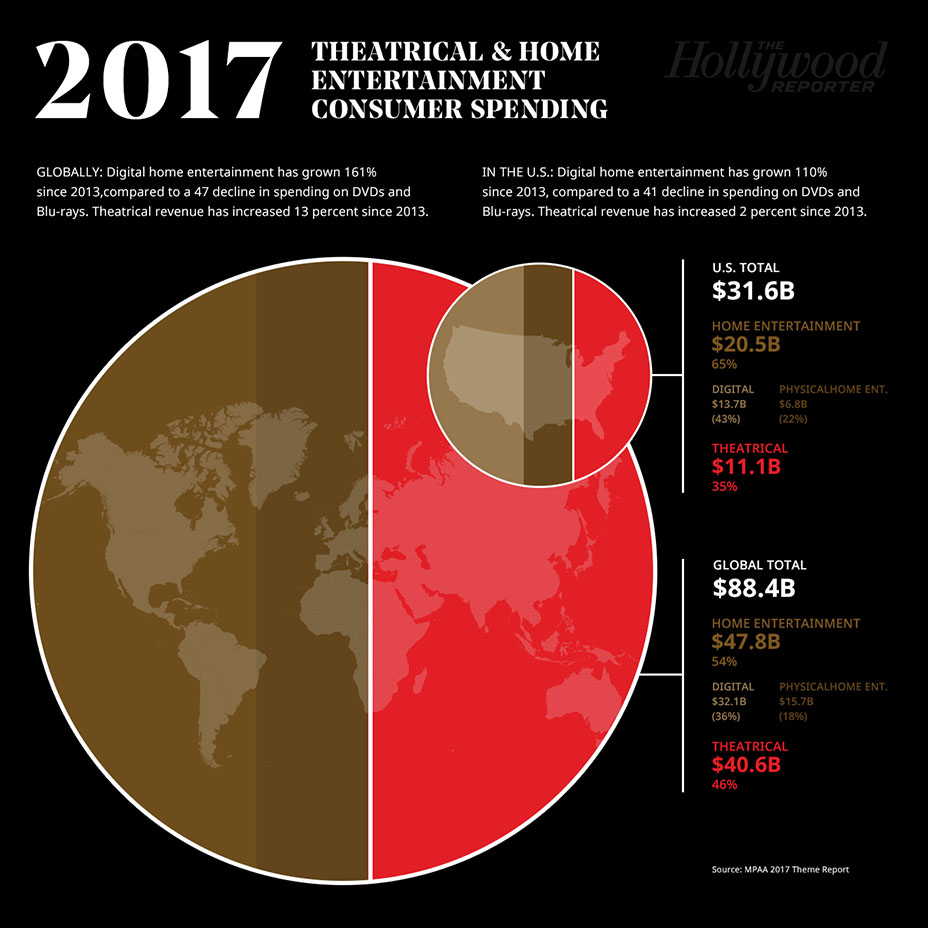