On Wednesday, an FX series will bring out the bellbottom pants, aviator glasses and polyester power suits. It isn’t just a retro runway — the throwback is for Mrs. America on Hulu. The show follows the women’s liberation movement during the 1970s, notably its biggest opposition: conservative activist Phyllis Schlafly.

Schlafly, a spiffy housewife, is played by Cate Blanchett, who rallies against feminists Gloria Steinem (Rose Byrne) and Betty Friedan (Tracey Ullman). Using a pro-family rhetoric and decrying abortion, Schlafly derailed the Equal Rights Amendment — which could have led to equal pay for women (roughly 50 years later, the ERA Coalition is still at work).

Something is to be said of a divided America’s style. Schlafly and her homemakers don homemade knit sweaters, tailor-made aprons and skirts. It’s a different look from the urban hippie looks (worn by Steinem) with jeans, T-shirts and patterned prints.

One side of her office had images of the women’s liberation movement, while the opposite featured Schlafly and the anti-feminists. “On the wall between them, they merged together,” she says. “It was a huge collage, my inspirational base. You can see who’s who and who is on which side. Later, housewives became libbers, it got so public, people changed their minds. It became more united.”

Costumes for Schlafly and her “Stop ERA” group wore preppy pastels. “Soft colors and A-line skirts were for the anti-feminists. None of them were wearing pants,” said Daigeler. “I wanted a classic American housewife, proper and clean. The ERA [look] was bohemian, New York style, much more fun. Designer clothes.”

Her inspiration came from 1970s fashion magazines, from Vogue to Cosmopolitan, alongside photojournalism. “I mostly used documentary photos of actual street clothes to get the real feeling of what people were wearing in the different locations we showed,” said Daigeler, who also designed costumes for Mulan. 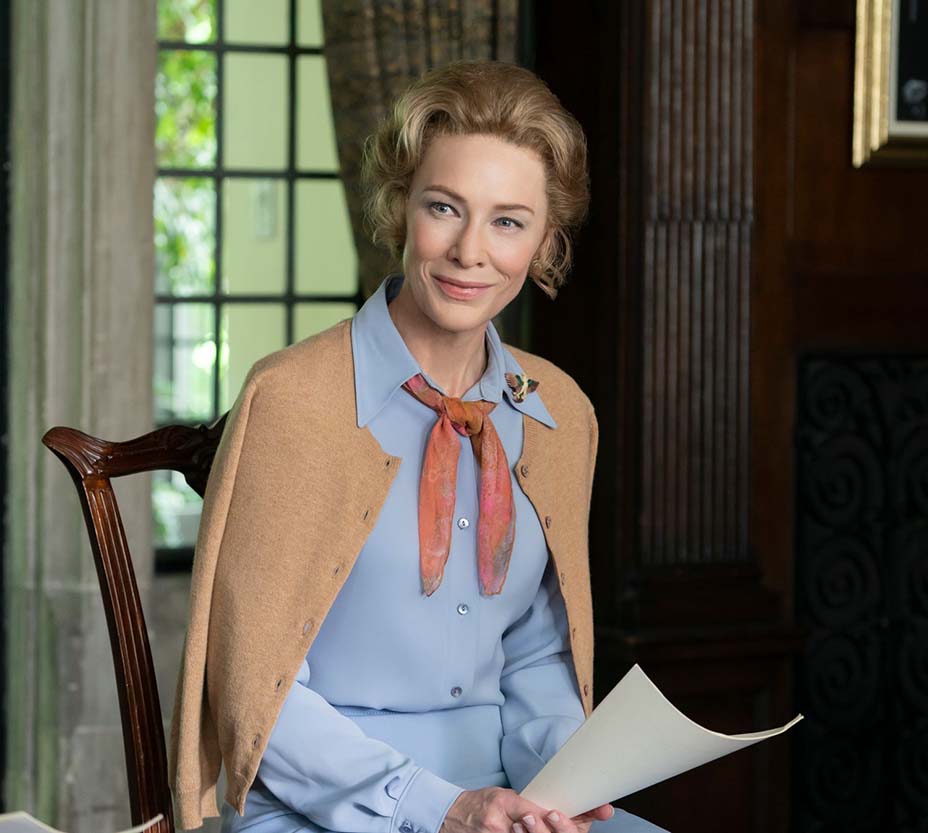 Part of her creative process involved mood-board magazines for each character. “I started with one special magazine for Cate Blanchett and another for Rose Byrne to help get them into their subjects,” she said. “I made magazines as mood boards for everybody, actors and directors, to get into our series.”

Approaching Blanchett’s character was straightforward. “I made exact copies of the outfits you see when you google her, from appearing on The Phil Donahue Show to the protests,” said Daigeler. “Then, we started to build the rest of her closet: Who is she when she’s at home? When she’s with friends, when she’s desperate? Does she ever cook or is it always her housekeeper? You develop all these emotional parts and you try to build that into their closets.”

Daigeler wanted to show Schlafly as a character in control. “She was always put together,” she said. “Phyllis was always very stiff and always had everything under control.” 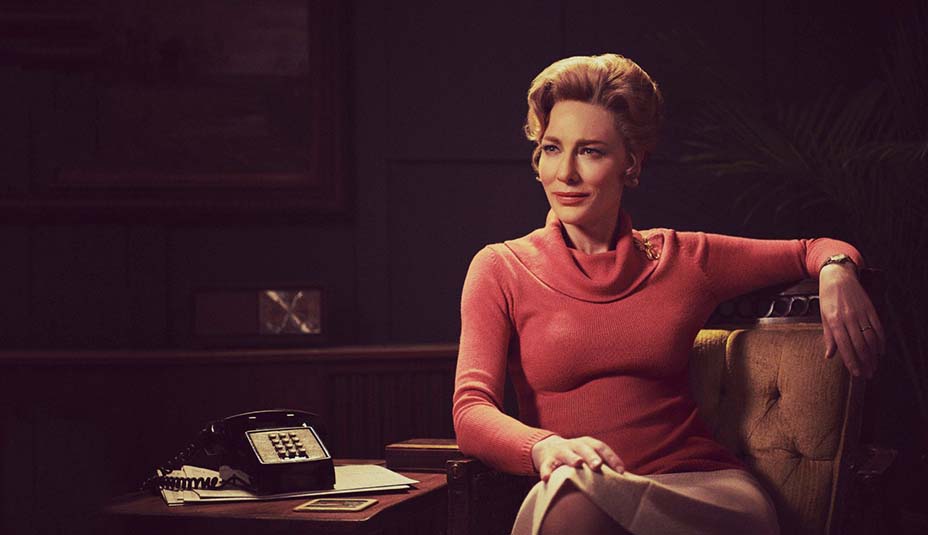 On Etsy, she even found one piece, an Oscar de la Renta dress, that Schlafly wore to her “death of the ERA gala” — where she declared, “The ERA dies tonight, morally and constitutionally,” in 1979.

On a call with journalists, Blanchett said she was “obsessed” with the costumes. “I got a call from [executive producer] Dahvi Waller at 6 a.m., saying, ‘I have to speak with you, come to my trailer.’ I thought, ‘Oh, something very exciting has happened.’ She said, ‘I have the dress. Can you believe it?’ And she found the exact dress.”

The image is used in the show’s poster, shot from behind. “It looks like angel wings that she’s wearing, she’s like a dog with a bone,” said Blanchett. “Like she just won’t let something go.” 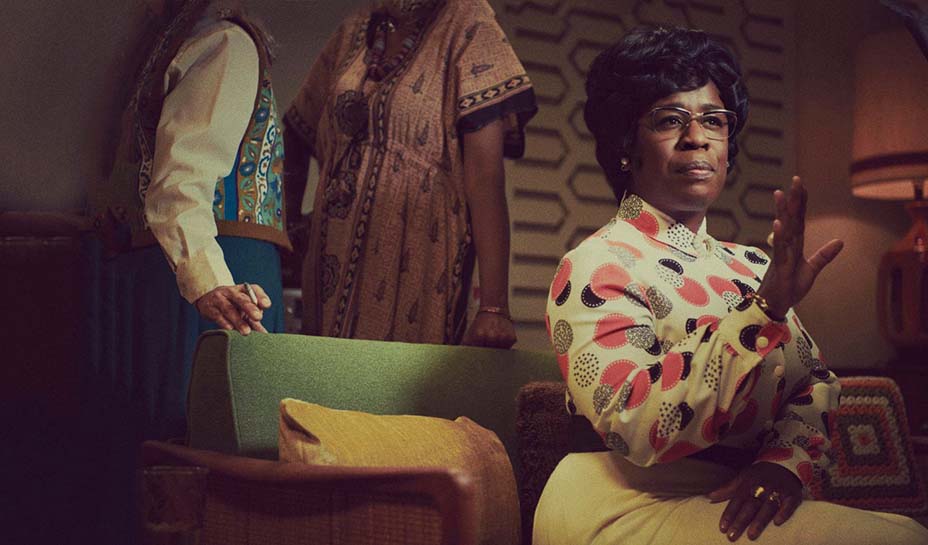 Daigeler remembers Blanchett’s first reaction to that dress. “I remember Cate saying, ‘Phyllis Schlafly’s spirit is around here,'” Daigeler told THR. “I realized Phyllis wore the dress to one of the dinners, so I just had to have it. I bought it and we rebuilt it, but I thought, ‘Wow. It’s just crazy.’ “

That was a rare moment. Most other costumes were made in the studio lot’s on-set workroom in Toronto. A few items, however, were high-end vintage pieces found online or in boutiques. Some 1970s looks include folk-embroidered Hungarian blouses, maxi dresses, polka-dotted shirts, scarves and beaded jewelry.

The fabrics ranged from silk to natural fabrics like cotton and wool. “I love to show textures. I think that somehow natural fabrics look nicer on camera with the colors,” said Daigeler. “It was a lot of polyester.” 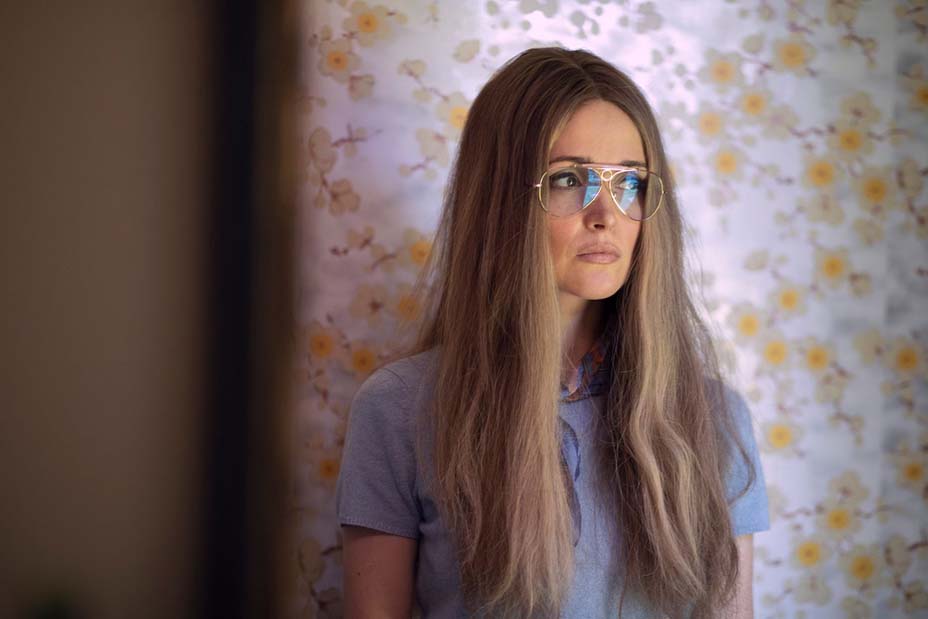 “It was such a huge undertaking because of the time stamp from 1970 to 1980,” said Byrne on a call with reporters. “The aviator glasses were so integral, I tried on many pairs and tried to match it without having the glasses be too big, trying to avoid being a caricature.” 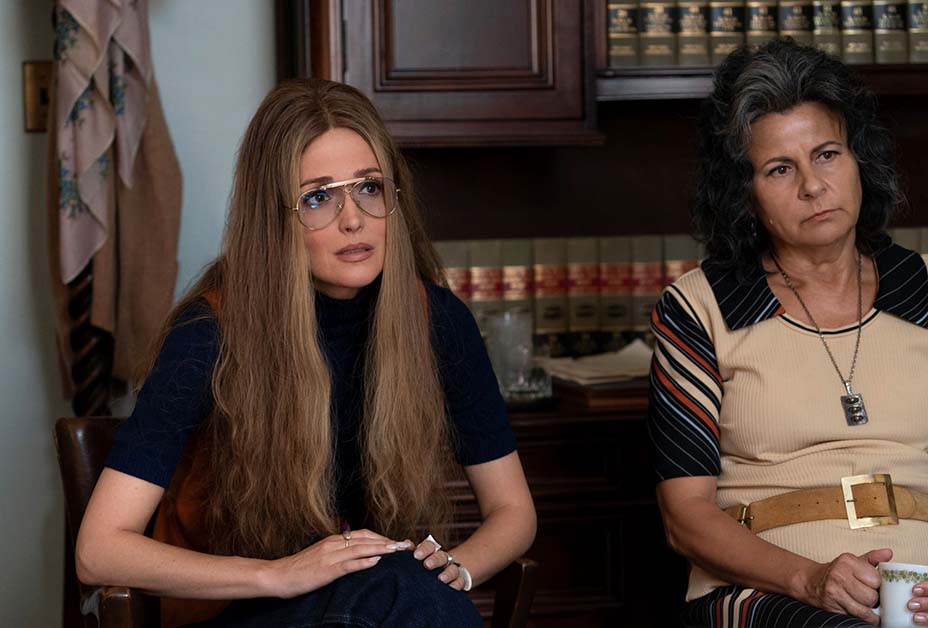 Mrs. America isn’t a biopic, but Daigeler wanted the looks true to their real-life characters. One example is episode three, during which Shirley Chisholm ran for president in 1972. She wore patterned polyester blazers with sharp collars, double-breasted coats and tie-neck blouses.

“We printed the fabrics exactly how they should be,” said Daigeler. “Shirley had it very clear what she was wearing; I wanted to match that. The process was: Design the fabric, print the fabric, make the outfit, build the jewelry and make the look as the real Shirley. That was important. These were people who really existed.” 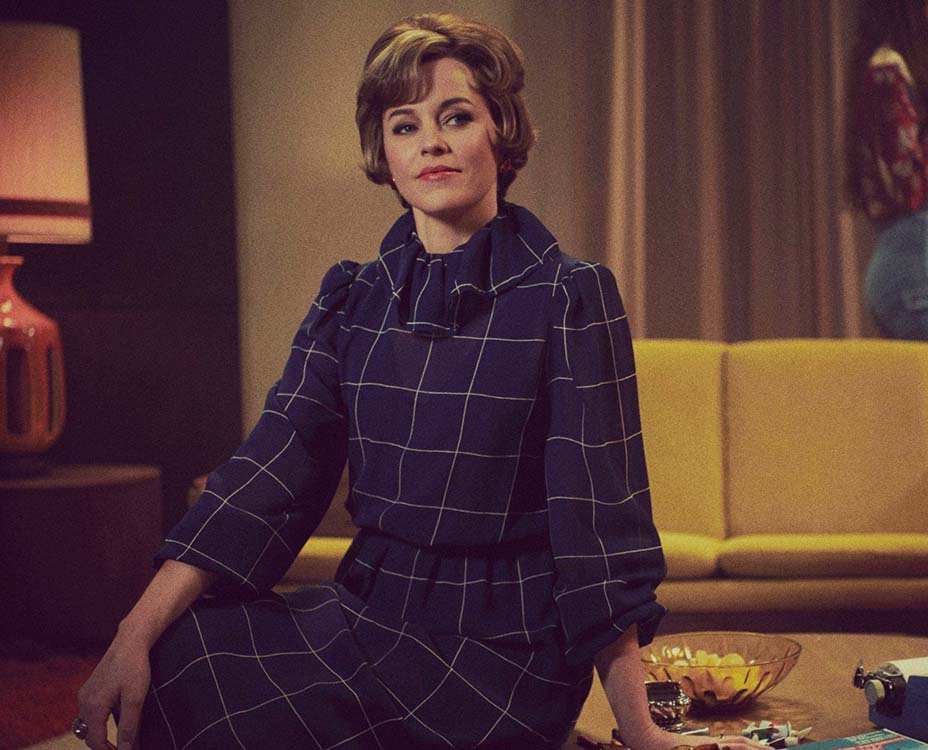