The first thing you notice as you take your seats for director Kenny Leon’s Shakespeare in the Park debut with Much Ado About Nothing are the “Stacey Abrams 2020” banners plastered on the walls of set designer Beowulf Boritt’s fancy pile of bricks. The Georgia manse of a family of well-heeled, African-American Southern Democrats is trimmed with pretty magnolia trellises and sits on a manicured lawn edged with peach trees. If the idea of triumphant soldiers returning from war reframed as demonstrators rallying against the hate of our current political moment seems underdeveloped, the production’s flimsy concept is outweighed by the sparkling chemistry of its two enormously appealing leads.

Returning to the New York stage for the first time since her terrific Broadway debut in The Color Purple, Orange Is the New Black regular Danielle Brooks’ Beatrice is captivating, funny and suitably feisty about both the expectations and the limitations imposed on her as a woman, injecting understated feminist accents into the text. And Brooks’ fellow Juilliard alum Grantham Coleman is an excellent match as the sparring partner to Beatrice in their long-running “skirmish of wit.” As much as his affection for her, it’s the massaging of his vanity when he learns of Beatrice’s supposed attraction to him that helps the character overcome his aversion to marriage, and Coleman mines self-mocking humor from that egotism.

It’s a mere five years since the Public Theater last produced Much Ado in Central Park (with Lily Rabe and Hamish Linklater), but Leon’s take is sufficiently distinctive and sexy to justify the swift return. 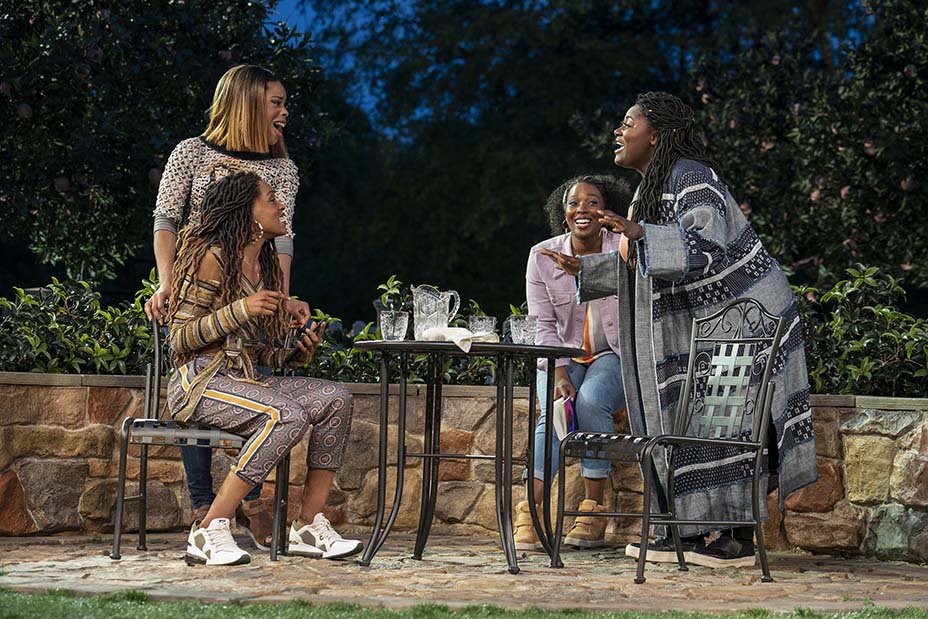 The director and his cast make over the Elizabethan rom-com with Southern charm, spirit and swagger, along with interludes of gorgeously sung music and vigorous dance-club moves. (The latter elements are courtesy of composer Jason Michael Webb and choreographer Camille A. Brown, celebrated for their recent work on Choir Boy.) The ensemble — while at times directed to play the comedy too broadly, signaling every bit of sexual innuendo with blunt gestures when a cheeky wink would have done just fine — enlivens the language with the natural humor and musicality of African-American speech patterns. This might be the first Much Ado About Nothing in which Beatrice puts the cocky soldier Benedick in his place by tacking “Okurr?” onto the end of a line.

Brooks opens with an a cappella version of the Marvin Gaye protest classic, “What’s Going On,” while the other gentlewomen look up from braiding each other’s hair and checking their phones to chime in with “America the Beautiful.” That mashup communicates the central theme that love, not fighting, is the only answer to the divisions of a country worth saving. It also dovetails with the production’s reflections on male pride and jealousy butting up against the self-respecting dignity of women, tapping into the contemporary realignment of the gender balance.

Leon plods through the rambling yap of Shakespeare’s first two acts without much momentum, but the energy picks up once the main thrust of two couples negotiating a tricky path to marriage is established.

Running parallel to the verbal jousting of Beatrice and Benedick is the more immediate romantic connection of Benedick’s buddy Claudio (Jeremie Harris) with Hero (Margaret Odette), the lovely daughter of Beatrice’s uncle Leonato (Chuck Cooper). The prince, Don Pedro (Billy Eugene Jones), helps cement that bond with some maneuvering during a masked dance that’s like a club-kid rave with a dash of vogue ball. But his scheming illegitimate brother Don John (Hubert Point-Du Jour) throws a wrench in the works by orchestrating the false impression that the virtuous Hero has been unfaithful, a thread somewhat lacking in clarity here. 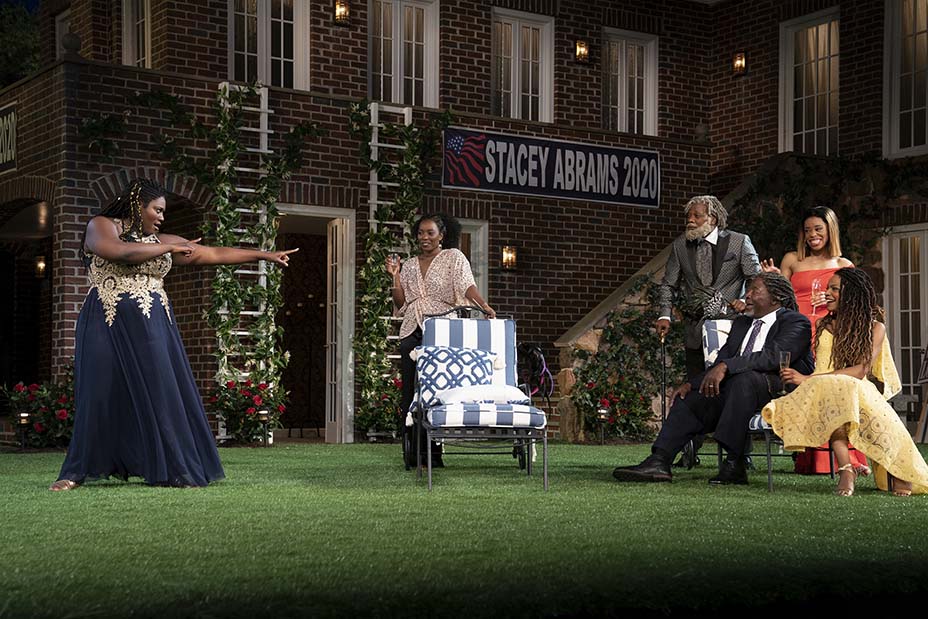 The production’s most amusing scenes are those in which first Benedick and then Beatrice remain in hiding, listening in as their friends plant the seed that their animosity for one another is really just love in disguise. Coleman’s physical comedy is a hoot as Benedick squats behind a hedge, struggling to control his impulse to get down to the sweet music of Balthasar (Daniel Croix Henderson), and then leaps behind a pillar and flies up the stairs to hide on the terrace. Brooks is equally hilarious, getting in amongst the audience and scrambling across entire rows while responding with outsize reactions to the news coming from the stage.

The less-inspired silliness is the fussy business involving Dogberry (Lateefah Holder), the inept constable whose crew stumbles across the truth of Don John’s treachery. Those scenes often are a tedious interlude of belabored shtick in Much Ado, and this production is no exception, even with the gender switch of the cop. And Erik Laray Harvey’s hammy performance as Dogberry’s sidekick is no less tiresome than his sketch-comedy caricature of a doddery old man as Leonato’s brother Antonio. Still, as is often the case in the Park, where the fallback position of many directors is the broader the better, the audience eats it up.

Leon’s work is more nuanced in the dynamics of the two main couples. Claudio’s enraged rejection of Hero at the wedding altar is genuinely shocking, hurling her to the ground with brutal force and bitter accusations. And the willingness of Leonato to believe her disgrace, declaring death to be a preferable outcome for her than shame, allows the always commanding Cooper to power up into full-force wrath. This also provides the opening for Beatrice to step forward and vent her fury at her cousin’s unjust dishonor, showing a ruthlessness normally reserved for men when she enlists Benedick to avenge Hero. 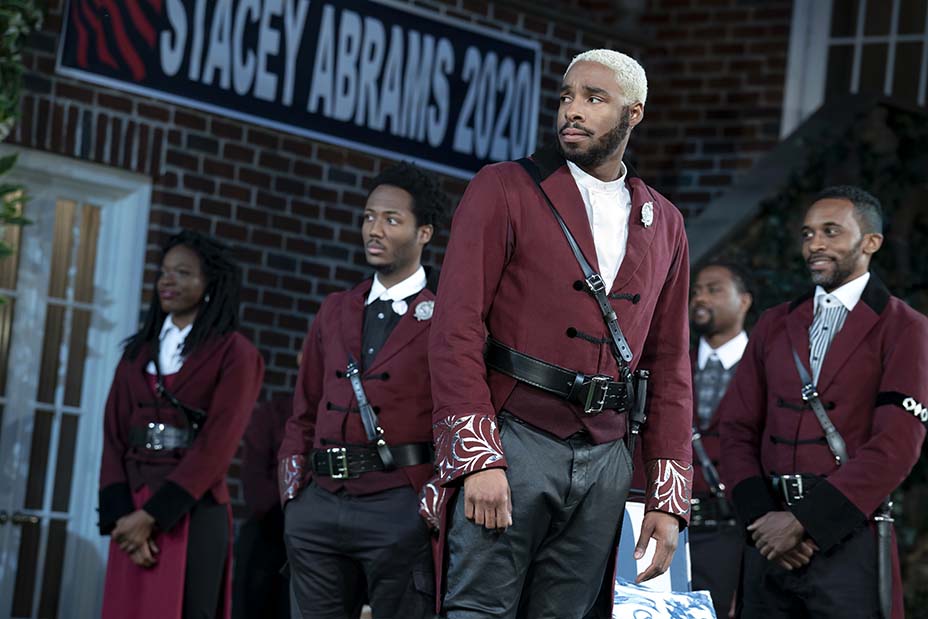 The twisty road to matrimony for Beatrice and Benedick often gets a little lost here in a busy staging that could have used a tighter focus. But the union, when it finally happens, is uplifting. And having the wronged Hero take back Claudio with a hard slap across the face is a nice, empowering touch.

Compared to the revelatory delights of last year’s musicalized Twelfth Night, the production doesn’t make the strongest textual case for this contemporary reading of a play from the late 16th century. But it delivers on the fundamental requirement of Shakespeare in the Park comedies, which is to provide an entertaining night under the New York summer skies.

Designer Boritt amply fulfills his duties by creating a set that’s not only pleasing to the eye but also beautifully integrated into the surrounding greenery. The effect when Peter Kaczorowski’s lights sprout like fresh fruit in the trees is enchanting. And with the exception of an unfortunate striped robe that makes Brooks look like a deck chair, Emilio Sosa’s costumes are fabulously stylish, not least the military-chic burgundy-and-black combos of Don Pedro and his men, fighting for Democracy, personhood, love and Stacey Abrams. All causes worth championing.

Danielle Brooks Takes the Lead in 'Much Ado About Nothing'