Candice Bergen and Diane English savor the suggestion that the current president might direct his Twitter ire at Murphy Brown.

Their once and future CBS sitcom, an 18-time Emmy winner, has always been game to spar with the establishment. Witness former Vice President Dan Quayle’s infamous 1992 “family values” speech, which censured Bergen’s portrayal of a working single mother and prompted an on-air response from her TV anchor character. What’s less exciting to the two women, resurrecting their comedy for an 11th season Sept. 27, is how the series’ fiercely progressive POV will go over with the MAGA set. “We aren’t going to court certain people,” says English, 70, perched on a couch with Bergen, 72, at Murphy Brown‘s Astoria, Queens, soundstage. “We hope everybody enjoys the show, but we don’t pull any punches. We can’t self-censor.” Self-censoring was also out of the question during this early-September conversation, just before rehearsals for the season’s aptly titled fourth episode, “#MurphyToo,” amid CBS’ own #MeToo saga.

The longtime colleagues shared their thoughts on staying timely, their days receiving congressional headshots and Bergen’s college date with Donald Trump himself.

Right now you’re filming a #MeToo episode. The news media, the setting of Murphy Brown, has been hardest hit by these revelations of abuse and misconduct. Were you surprised?

DIANE ENGLISH I was surprised by certain revelations and cover-ups. We know what goes on, but I was a little blinded to the extent of it — because it was never my experience. It’s been a bit of wake-up call, which was another motivation for doing this.

CANDICE BERGEN In the episode “#MurphyToo,” we have a very in-depth look at the issue — for a 21-minute show. We wanted to look at both generations’ perspectives of the huge issue of sexual harassment. There’s a dramatic scene between Murphy and her son [Jake McDorman].

ENGLISH We’re only doing 13 episodes, and we wanted to make a little bit of noise with each. 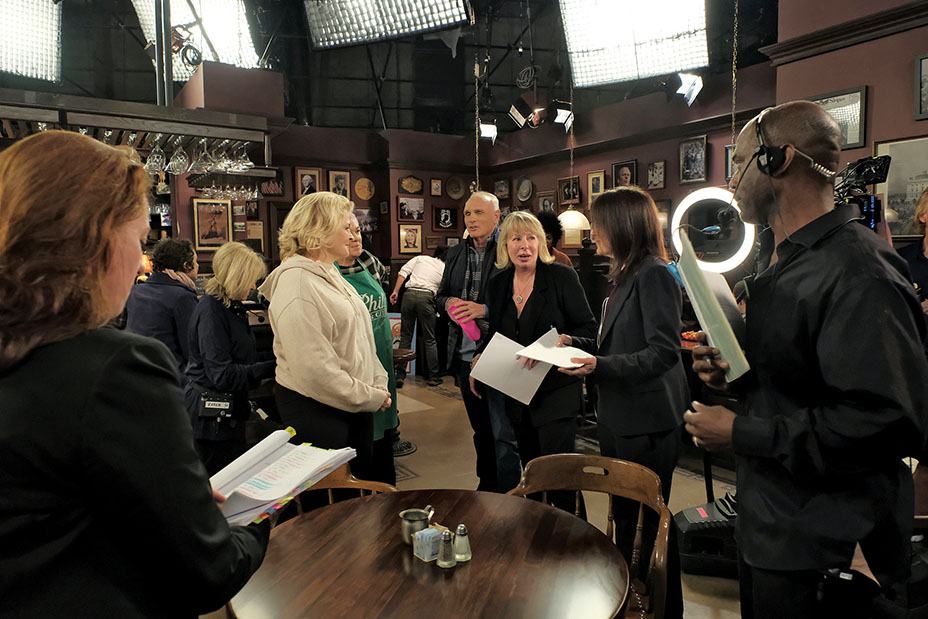 Representation and gender parity are dominant topics in Hollywood. You were both rare the first time around, in terms of being a solo female lead and female showrunner. How did that shape the experience?

Was it ever frustrating being a unicorn?

ENGLISH There were some others, Linda Bloodworth-Thomason [Designing Women] and Susan Harris [The Golden Girls] … but I think that’s the end of the list. (Laughs.)

TV actors often have a hard time distancing themselves from characters once shows end. Is it weird at all for you to go back 20, 30 years?

BERGEN Really, I missed Murphy. The first couple of weeks were very emotional. It was eerie seeing the set, exactly the same as the one that stood in Burbank for 10 years — only it smelled of sawdust because it was brand new. So far, I haven’t been able to get through a curtain call without getting weepy. 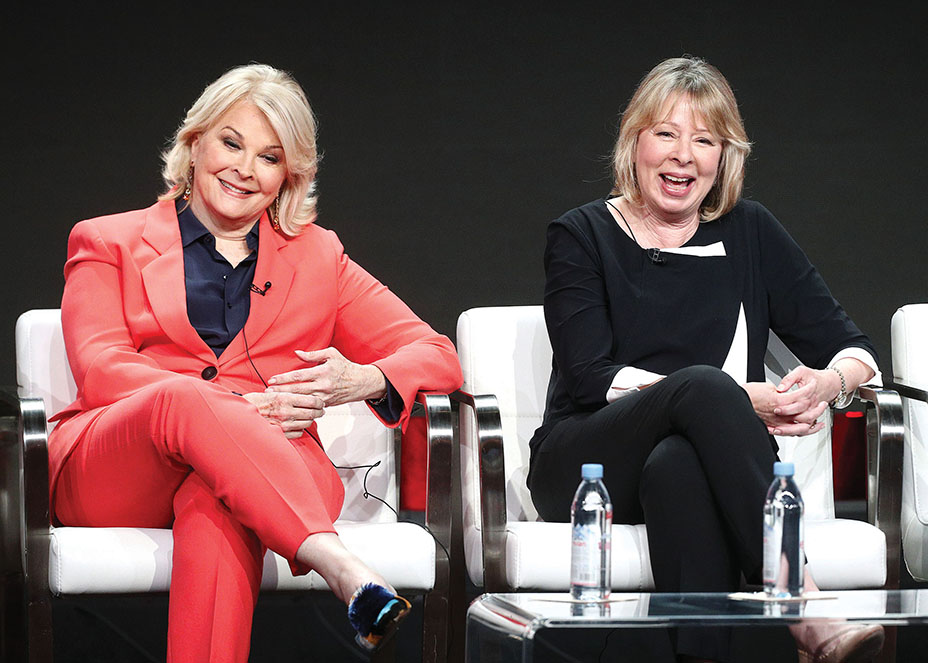 Diane, your last credit was The Women in 2008. Why have you been holding out?

ENGLISH I’ve rewritten other people’s movies and not taken a credit. I’ve written numerous pilots that never made it to air. And I felt like I was doing my best work, but when they didn’t get picked up, there was a bit of relief. I have built this really nice life for myself. I’ve got a house in Martha’s Vineyard. I don’t need to be chained to a soundstage for nine months.

You’ve both spoken about the offers to do this again over the years. What was the tipping point?

ENGLISH I watched Will & Grace very closely to see how they reinvented their show. And, as the days’ headlines became more and more horrific, we felt we had a real reason — maybe the only show with a real reason — to come back. We have the ability to be really relevant and examine, in an age where people are screaming “fake news” and “enemy of the people,” these characters who are the press.

How important is it for you that this show feel current?

BERGEN My daughter, who is 32, was skeptical. She said, “Do you even know what woke means?” Of course, I didn’t. But Diane did.

ENGLISH We’re paying a lot of attention. We shot an episode about a character that’s very Steve Bannon-like. There’s this whole debate. “Do you take the person on the show for ratings or do you not want to give this person a voice?” Two days after we shot it, The New Yorker Festival pulled Bannon from the lineup.

The original series leaned very hard into real individuals from the government and media, not just fictional stand-ins. Does the same hold true this time around?

ENGLISH We name-check a lot of people. We haven’t closed the deals yet, but we have some real people coming on. We continue to blur the line between fiction and reality. Dan Quayle fell right into that trap. You couldn’t tell if Murphy Brown was a character or a real person when that happened.

BERGEN I couldn’t pick up a newspaper back then! 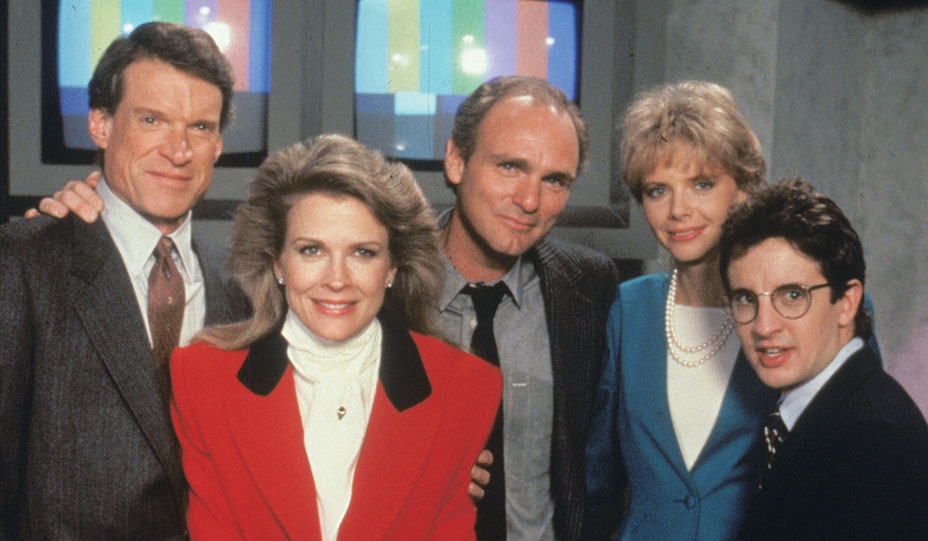 Now we’ve got a president with a known affection for chiming in on the culture. Do you want to be the target of vitriolic tweets?

ENGLISH I don’t think he’s going to be able to resist making a comment, and we welcome that. That’s fun for us. We don’t welcome what might be a very aggressive reaction from some of the supporters out there. We’re bracing ourselves.

BERGEN Because you could be hurt. His followers are very vocal. I posted an Instagram of a Trump dog toy. I didn’t say a thing, and I got reactions from Trump supporters that I’m still trying to understand. They were rabid. It’s a dog toy! And suddenly it was all, “Death!” and “Hollywood elites!”

Candice, the fact that you went on one date with Trump when you were studying at the University of Pennsylvania has been gossip fodder for the past two years, but I don’t believe you’ve said what you actually did on the date.

BERGEN We went to some restaurant in Philly. I have no idea where it was, but it was some fancy steak house. I remember nothing of it, only that it was still light when I got home. (Laughs.)

You had a lot of politicos as guest stars the first time around. How did their behavior compare to Hollywood types?

ENGLISH Every now and then, you’d get a diva. But mostly they were fans of the show — which we loved because we wanted to get it right. Back in the day, we were on Mondays at 9 o’clock, and we were told that the whole Beltway emptied out to watch Murphy Brown. There was no DVR, and politicians wanted to see if they got name-checked. The crazy thing is that we started getting headshots from people like Arlen Specter and Orrin Hatch. They wanted to be on the show. I remember Arlen Specter’s photo was him posing next to a piano. (Laughs.)

BERGEN That may have gone on the dartboard.

ENGLISH The one who broke the barrier was Connie Chung. There was a concern — one that doesn’t exist today because entertainment and news have kind of merged — that if you were a serious news person, you would not appear on a situation comedy. But Connie did it, and the ceiling was broken. Then everybody wanted on.

The TV news has changed con­sid­er­ably since the show wrapped its original run — and Murphy’s on cable now. What kind of research did you do?

ENGLISH The first iteration of the show, we did spend time in the 60 Minutes offices and with Dan Rather at the Evening News to get it right, but somehow cable seems like it’s pretty transparent. There’s no mystery as to how this is happening. These people just sit there, have a cup of coffee and spout out their opinions.

How did you digest the wild success and abrupt implosion of Roseanne Barr’s return to TV?

ENGLISH Her success the first go-round was immediate. That show premiered within the same month as ours. She was No. 1. We were, like, No. 35. It took almost two years to get in the top 10.

BERGEN Who knows how the audience will respond without her, but I thought ABC really behaved as well as one could.

ENGLISH They needed that show. It’s tragic because it was good. 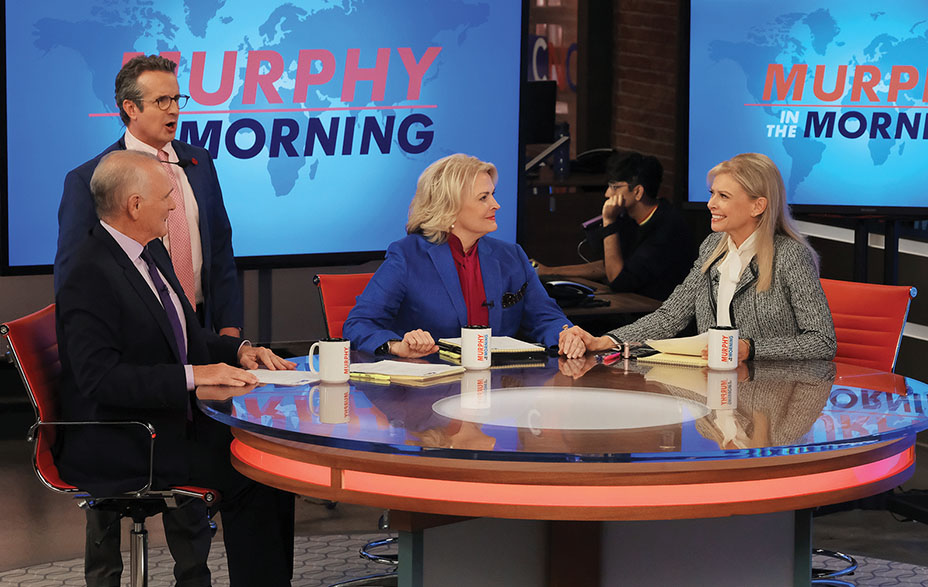