There’s a breathtaking visual in Lincoln Center Theater’s new My Fair Lady when Lauren Ambrose emerges as Eliza Doolittle, transformed from common-as-muck flower girl into regal stunner, done up to attend the posh Embassy Ball. Costumer Catherine Zuber has wrapped her in a pale golden sheath that seems to fuse with the actress’s alabaster skin and copper-colored hair. When the servants help her into a voluminous ruby-red cloak, she looks like a dewy English rose in full bloom. Comparable delights intoxicate the eyes and ears throughout this sumptuous staging from Bartlett Sher, a director who has proved to be among the very best at chiseling surprising nuance out of vintage musicals. So why is the stately revival also a slight disappointment?

Partly, it’s because of the exceedingly high bar Sher has set for himself with revelatory productions for LCT of South Pacific in 2008 and The King and I in 2015, both of them deserving Tony winners. Those midcentury Rodgers & Hammerstein warhorses, with their wonderful scores and problematic racial politics, provided fertile soil for the director to till, yielding fresh dramatic sensitivity, startling depths, and layered excavations of character and milieu.

But My Fair Lady — with its roots in Pygmalion, George Bernard Shaw’s witty comedy of class, identity and sexual dynamics — is generally regarded as a near-perfect musical, and it proves somewhat resistant to Sher’s penetrating approach.

There’s been wide discussion in advance of this production of how the 1956 Lerner & Loewe classic would play in the present climate, with issues of gender inequality receiving intense scrutiny. The optics of a bullying man molding a woman according to his (and Edwardian high society’s) standards of sophisticated perfection, not even crediting her with providing the raw clay, now seem more uncomfortable than ever. With zero changes to the text, Sher has taken those concerns on board, via minute shadings in the performances, subtle shifts in the power balance and a closing visual statement that breaks the fourth wall, heightening the ambiguity of the ending. Eliza is established as the equal of her teacher, a self-possessed woman with the agency to march into a future in which this difficult man, with whom she has nonetheless developed a deep mutual affection, may become a marginalized figure or more likely disappear altogether. 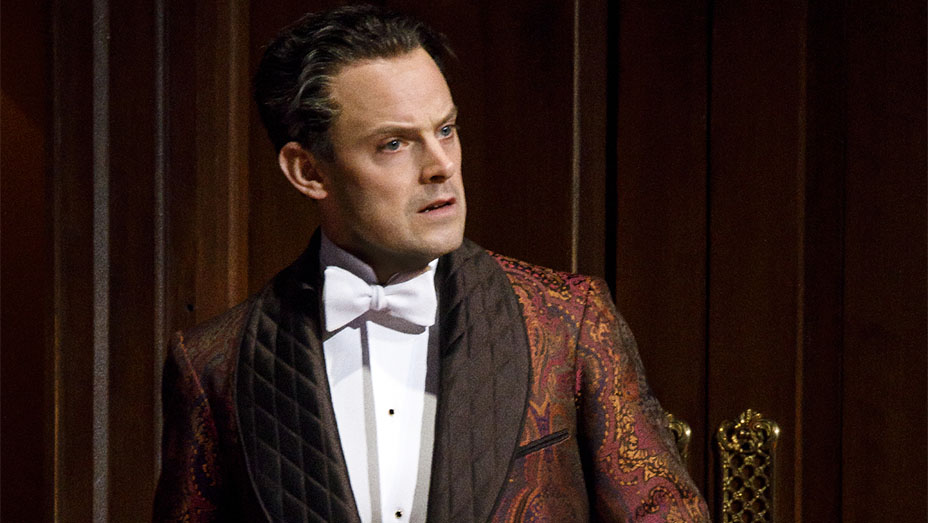 That’s all to the good. The changes are minor enough to go virtually unnoticed but sufficiently considered to fuel discussion among those convinced this light period piece has problems that needed addressing. Beyond that, it’s a polished production with an accomplished — if not spectacular — cast. But it doesn’t come close to the sweeping cinematic fluidity of Sher’s best work, which filled the immense Beaumont stage with a majestic breadth seldom equaled. Nor does it approach the thrilling emotional engagement of those earlier shows.

A significant factor is Sher’s admirable refusal to overamplify his productions, unlike the assaultive norm for most musicals these days. The vocals in his shows have a natural, far more human sound, which creates a spellbinding intimacy when you have effortless singers like Kelli O’Hara, Sher’s leading lady in South Pacific and The King and I. O’Hara sang the role of Eliza in a 2007 New York Philharmonic concert staging that those of us lucky enough to see will never forget. Her liquid soprano is such a rare instrument that she just seems to open her mouth and sounds made in heaven come pouring out. Ambrose has a pretty voice not lacking in assurance or power, especially in the upper register. But unlike O’Hara; the original My Fair Lady Eliza, Julie Andrews; or even Marni Nixon, who dubbed Audrey Hepburn’s songs in the beloved 1964 movie, she’s an imperfect fit for the vocal demands of this role.

Ambrose, fondly remembered as the eternally searching Claire Fisher on Alan Ball’s brilliant reinvention of the dysfunctional family drama, Six Feet Under, knows her way around a stage. She was an incandescent Juliet opposite Oscar Isaac’s Romeo in a 2007 Shakespeare in the Park production. But aside from her first song here, “Wouldn’t It Be Loverly?” — captivatingly staged by Sher and choreographer Christopher Gattelli, with gorgeous vocal harmonies and a warm sense of the working-class community — I found Ambrose’s unrefined Eliza squawky and charmless, blunting much of the early comedy. For me, she grew into the role only once the “squashed cabbage leaf,” as phonetics scholar Henry Higgins (Harry Hadden-Paton) so uncharitably calls her, had begun to flower.

Hadden-Paton, best known as Lady Edith’s eleventh-hour romantic savior on Downton Abbey, is in many ways an excellent Professor Higgins, suitably arrogant and dismissive of almost everyone in his orbit but not without vulnerability when his pride is pierced. He shows a playful sense of humor and makes nice work of the patter songs devised for nonsinger Rex Harrison, bringing a welcome musicality to sometimes tiresome character numbers like “I’m an Ordinary Man,” “Why Can’t the English?” and the blithely misogynistic “Hymn to Him.” 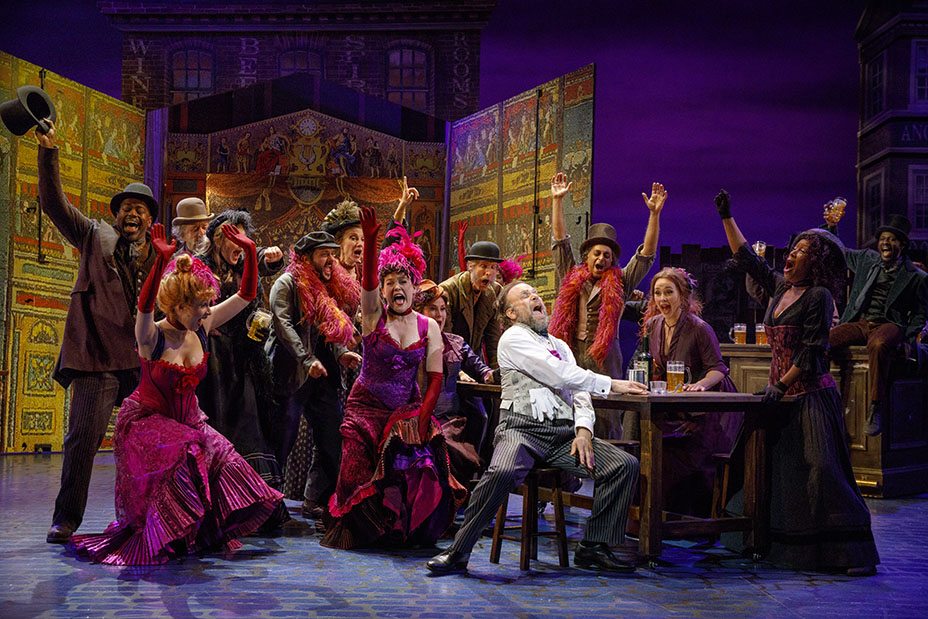 The unusual proximity in age of the two leads (Ambrose is 40 but reads younger, Hadden-Paton is 37) works fine, and there’s convincing romantic chemistry beneath their quarreling. Yet I never felt fully invested in them as characters, coming back repeatedly to the nagging suspicion that neither performer has the star charisma to carry this show. For My Fair Lady to sweep you along, you need to fall a little in love with Eliza, to the point where you bristle at Higgins’ rudeness but are willing to put up with it in order to participate as this rough diamond shakes off the dust and begins to shine. When Eliza has her breakthrough, finally conquering those pesky vowels and cavorting around the room singing “The Rain in Spain” with Higgins and his accomplice in their makeover experiment, Colonel Pickering (Allan Corduner), their jubilation feels forced. Corduner is a wonderful actor, but he’s almost lost in the mix here.

The show’s big set pieces nonetheless are effective. The “Ascot Gavotte” is both an eyeful and a comedic jewel, with Zuber giving a nod to the iconic costume designs of Cecil Beaton for the film in her stylish outfits for the glacially poised toffs attending the horse races. It’s also a fun visual joke that Eliza’s ensemble for her test-drive in society has been chosen by Higgins and Pickering without her consultation, so she looks like an uncomfortably gift-wrapped confectionary package compared to everyone else in their crisper, more muted couture.

Ambrose is hilarious with her carefully practiced “How do you do’s” and painstakingly aspirated H’s. She’s even funnier when Eliza confounds the starchy assembly by showing how much colorful spontaneity she can inject into the “safe” topics of the weather and one’s health. The priceless deadpan reactions of Diana Rigg more than justify the deluxe casting of that venerable veteran — a former Eliza herself in Pygmalion — in the small role of Henry’s mother. “You’re a pretty pair of babies, playing with your live doll,” Mrs. Higgins says of her son and Pickering, with snappy impatience. Her sympathy and support for Eliza bolsters Shaw’s proto-feminist currents as much as the suffragettes that Sher sends marching across the stage.

Like the Ascot scene, the Embassy Ball also is enchanting. Eliza’s slow glide of an entrance down the enormous staircase is mesmerizing, not just because the butterfly has emerged so resplendently but because we know she’s trembling inside. Manu Narayan is given too long a leash to ham it up as Zoltan Karpathy, an obnoxious former student of Higgins who now claims to be unrivaled at detecting aristocratic impostors. But the spectacle of watching a radiant Eliza waltz around the room with a royal guest is every bit as beguiling as it should be. The choice of Sher and set designer Michael Yeargan to move the conductor and his 29-piece orchestra onto the stage for that sequence also allows us to appreciate the production’s unseen stars. 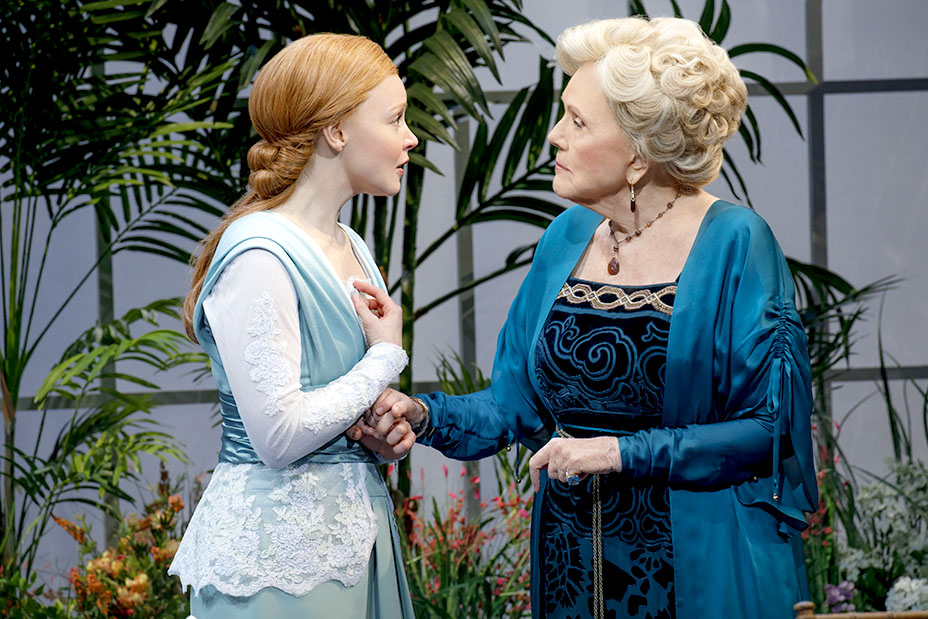 About Yeargan’s sets: The designer and director have always worked together in close harmony, and there’s certainly a gasp-inducing impact when we first see the principal set, a massive, intricately detailed representation of Henry’s book-lined, two-floor study. What’s more, it’s on a turntable that ushers us into other areas of the Wimpole Street townhouse, from the bathroom where Eliza gets cleaned up, to the main hall, with servants rushing up and down the stairs, to a little exterior courtyard nook. It’s all used to ingenious effect as Eliza stomps through the rotating house cursing her heartless host in “Just You Wait,” or in “The Servants’ Chorus,” as staunch housekeeper Mrs. Pearce (the reliable Linda Mugleston), the maids and footmen mark the passage of time, pacing fretfully about as the experiment drags on with scant success.

However, as impressive as it is, the considerable weight and mechanical logistics of such a monumental construction come with setbacks. The cumbersome movement of the set downstage every time the action returns to the house slows the transitions to a crawl, and the very audible rumbling of its machinery is a distraction that kept pulling me out of the story. It’s like waiting between scenes for someone to park an 18-wheeler.

Elsewhere, the sets are more mobile, and sometimes more whimsical, too, like the pub where Eliza’s father, the suddenly wealthy dustman and professional moocher Alfred P. Doolittle (Norbert Leo Butz), carouses with his drinking companions and assorted can-can-dancing floozies in the riotous music-hall number, “Get Me to the Church on Time.” When the dreaded morning of Alfred’s wedding rolls around, that set turns and transforms into a chapel, sprouting an ominous cross on top as if to entomb him. Butz is an ebullient performer with an irrepressible spirit, both here and in his earlier “With a Little Bit of Luck,” in which Alfred explains his shameless opportunism with a mischievous jig to match the twinkle in his eye. His English accent is a mess, but he gives a hardworking performance, hell-bent on pumping air into the production.

I kept wishing, however, that the revival achieved liftoff without such Herculean efforts, especially in rapturous songs like Eliza’s “I Could Have Danced All Night” or “On the Street Where You Live,” the serenade of hopelessly smitten Freddy (Jordan Donica), the suitor least likely to satisfy her. Both those songs are performed with real fervor and vocal ability, as is Henry’s reluctant admission to himself of his feelings for Eliza, “I’ve Grown Accustomed to Her Face.” But they are missing that magical spark, that vanishing of the line between performer and role that would make the songs truly transporting.

It seems ungrateful to quibble about one of the most entertaining musicals in history, lavishly produced in elegant style, with talented actor-singers and a full-size orchestra playing these great songs in the lush original arrangements of Robert Russell Bennett and Phil Lang. But blame Sher. He’s a master craftsman whose track record has made it legitimate to expect nothing less than sublime revitalization every time.