From the moment it began, Naeem Khan’s fall 2017 presentation was a showstopper.

There were gasps as the first look — a bedazzled pantsuit worn over a lacy, sheer bralette and styled with pearls — appeared on the red-carpet runway, and longtime fans of the designer could be heard murmuring, “his best work yet,” as the parade of feather-, pearl- and bead-embellished suits and gowns paraded past.

Fashion Gets Political: On and Off the Runway Statements

There was a warm applause as a model in a gold sequined gown marched down the catwalk, with many assuming that the sparkly creation was the last look. They were wrong.

IPhones were whipped out as the lights dimmed and the music stopped in preparation for the finale walk. But what appeared at the front of the runway was not the first beaded suit. Instead, a glowing black model in a gilded lace gown was illuminated, revealing her floral crown and veil and lengthy lace train. The crowd, giddy with appreciation and love, simultaneously gasped and clapped, and then Maya Angelou’s “Human Family” was played overhead. 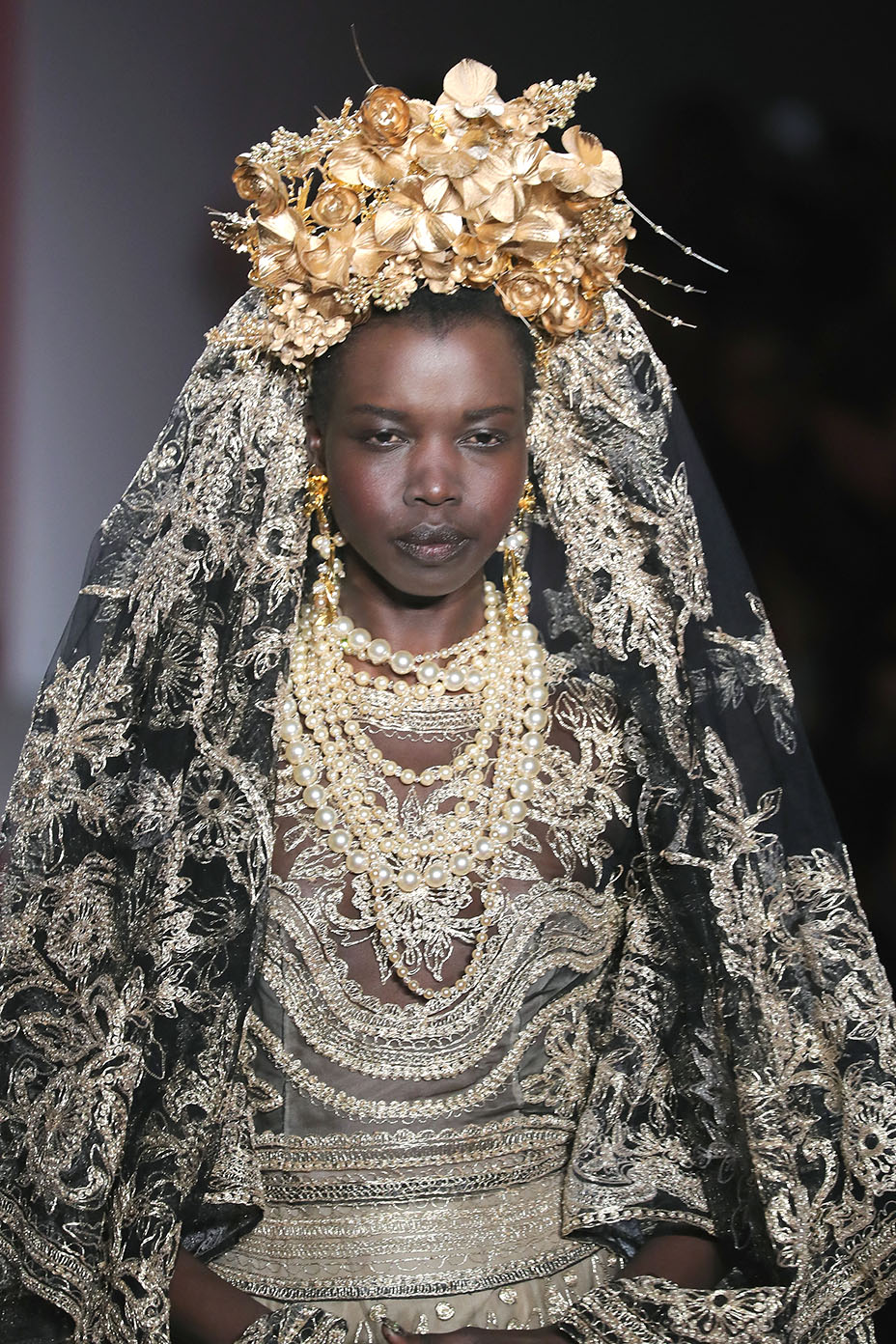 “I note the obvious differences in the human family,” the poem began, as the model walked slowly down the catwalk. “The variety of our skin tones can confuse, bemuse, delight/ brown and pink and beige and purple/ tan and beige and white.”

Khan told The Hollywood Reporter backstage that collection incorporated techniques from all over the world, “taking stuff from Poland, from India, from the Middle East. It was about diversification, because what makes this world a beautiful place is diversification.”

Of the closing bridal look he said, “That’s all Spanish; she’s a goddess from Spain… everything you saw was taken from different parts of the world.”

The statement felt both political as well as emotional — several showgoers were spotted sniffling when the lights were turned on after Khan took his bow to a raucous applause. Angelou’s poetry has been a part of political conversations in the past; she read her work “On the Pulse of Morning” at President Clinton’s 1993 inauguration, and was awarded the Medal of Freedom by President Obama. Angelou passed in 2014.

Khan also told reporters backstage that he would decline to dress Melania Trump should he be asked, calling the decision “very simple” because “the message does not resonate with me.” He added that Trump could buy his clothes in a store should she so choose. Former First Lady Michelle Obama wore his designs a handful of times while her husband was in office.

Final look draws gasp from crowd at Naeem Khan. Poetry plays in background: “we are more alike my friends than we are unalike” pic.twitter.com/uKTOQnN4ef

The designer is a favorite on the red carpet with A-listers like Mandy Moore (seated front row at the show), Emma Roberts and Emily Blunt. He plans to move his headquarters from New York to Miami in 2018.