Continue to The Hollywood Reporter SKIP AD
You will be redirected back to your article in seconds
Skip to main content
September 27, 2018 6:00pm

Sorry, but American actors can’t do regional English accents. OK, maybe Meryl Streep and a handful of others. But too few of the people on stage in The Nap, in which many of the best lines acquire their flavor from colorful Sheffield vernacular. Effortful delivery is just one issue with the wheezy direction of Daniel Sullivan, whose forte is definitely not this kind of snappy, suspenseful comedy, in which timing is everything.

Playwright Richard Bean’s last Broadway import was One Man, Two Guvnors, the riotous Goldoni update that made a star of James Corden and had the delirious off-kilter energy of an out-of-control carnival ride. It’s a testimony to the cheeky humor and ingenious plotting of this 2016 play that it remains agreeable entertainment despite less-than-ideal handling. The frequently hilarious one-liners help.

The comedy is an audacious choice for Broadway given that snooker is not a cue sport for which Americans have great affinity. In fact, this is a work so tied to its regional roots that after a well-received premiere at the Crucible Theatre in Sheffield, home to the World Snooker Championship since 1977, The Nap has yet to receive a major London production. That original staging featured the choice casting of Jack O’Connell as local lad Dylan Spokes, returning home to compete in the big event, and Mark Addy as his dodgy, dim-bulb dad, Bobby.

The American ensemble gathered by Sullivan for Manhattan Theatre Club can’t compete for authenticity, but it does have a convincing lead in Ben Schnetzer as Dylan, a character struggling to maintain his integrity as a sportsman despite being pulled into a betting scam. And making an equally tasty Broadway debut is Alexandra Billings of Transparent. Her accent hits several points around the globe, none of them South Yorkshire, but she doesn’t make the mistake of letting it trip her up. Instead Billings brings dangerous mischief and delicious understatement to the indecorously nicknamed Waxy Bush, a one-armed transgender small-time crook whose routine mangling of words and expressions makes her the Mrs. Malaprop of the sports-betting underworld. 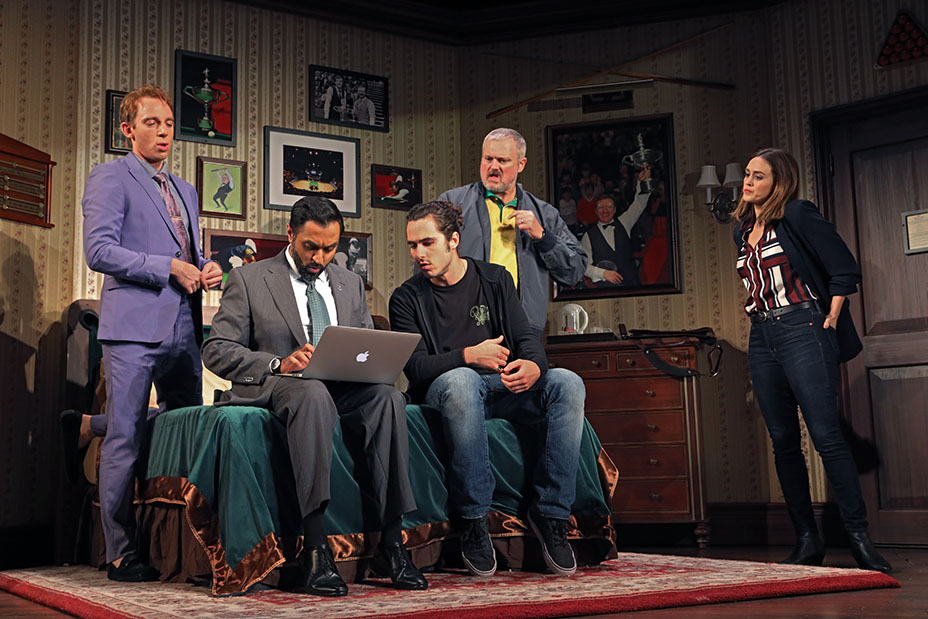 The play gets off to a slow start as Dylan shows his reverence for the baize-covered table in a dingy snooker hall while attempting not to lose patience with the inane prattle of his ex-con father and coach Bobby (John Ellison Conlee), a former drug dealer who now rents rooms in his rundown house to students. Dylan is hot off a win against the Thai champion in Brussels and is back in Sheffield with raised expectations. The arrival of Mohammad Butt (Bhavesh Patel) from the International Centre for Sport Security, and Eleanor Lavery (Heather Lind) of the National Crime Agency introduces the element of global criminal betting, after a spike during Dylan’s Brussels match caught the attention of the Gambling Commission.

Bean, whose background before becoming a playwright was in standup and sketch comedy, has a flair for lively banter. But even so, the potted history of snooker, plus the intricacies of match fixing, liquidity statistics and the explanation of “smurfing,” involving an army of small bets placed over a wide field, adds up to a hefty load of exposition.

The pace picks up once Dylan is inevitably approached to throw a match, a request in violation of all that he holds sacred. His refusal is complicated by the involvement of Waxy, who has been covering Dylan’s competition expenses for years and is looking to cash in. Before her gender reassignment surgery, Waxy dated Dylan’s trashy, pickled mother Stella (Johanna Day), who is now involved with boozy Irishman Danny Killeen (Thomas Jay Ryan), both of whom want a piece of the action. Only Dylan’s manager Tony (Max Gordon Moore) seems somewhat on the level, despite the flashy appearance and manner of a shifty operator.

As Dylan’s attraction to flirty cop Eleanor escalates into a tentative romance, he’s cornered into betraying his principles in order to flush out the scammers, with a startling act of violence giving him no choice. But things are not quite what they seem, and unlike his dad, Dylan proves smart enough to see through the elaborate con, possibly in time to save his reputation. 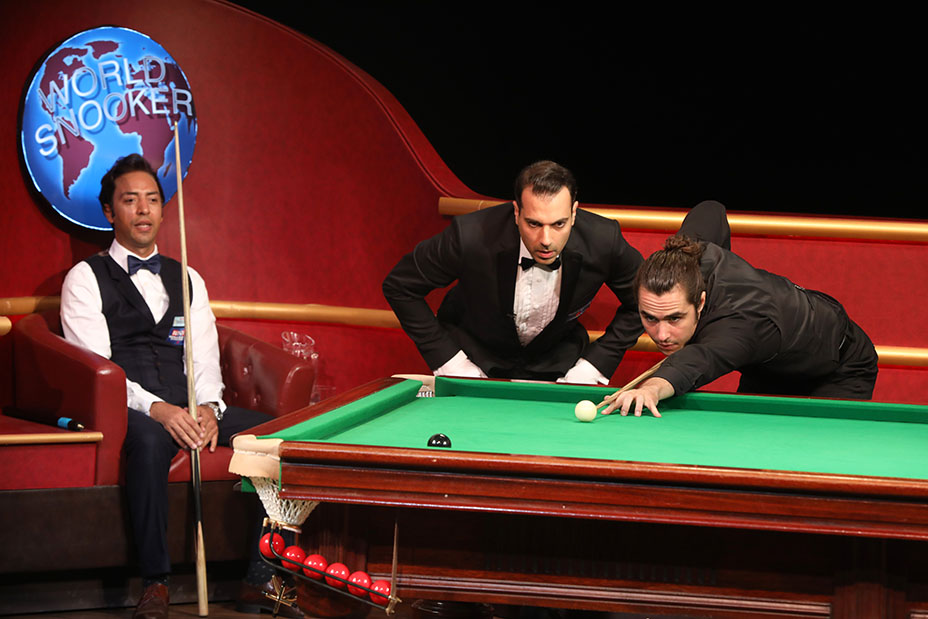 While he’s mostly playing straight man to some exaggerated comic caricatures, the terrific Schnetzer is the performer that keeps you hooked, giving Bean’s play about honor and corruption in sport an appealing hero. Whether Dylan is maintaining a Zen-like calm or being pushed over the edge into panic, the actor makes a natural everyman, a straight-up working-class lad who wants to do alright for himself without having to turn crooked like pretty much everyone else in his environment. Schnetzer’s grounded characterization even helps put across the contrived happy ending.

The rest of the cast is solid, notably Lind, who brings a winning insouciance to the saucy cop with a secret. But gifted actors like Conlee and Day generally are too tested by the accents to do their daftly humorous dialogue full justice. And costume designer Kaye Voyce veers over the top by outfitting Day’s Stella like some kind of grotesque troglodyte tart.

The most consistent source of laughs is Billings’ Waxy, who never bats an eyelid as she spouts such doozies as “This is better than my wettest dreams!” or “I am nothing if not an optometrist.” Billings plays even the character’s most outrageous malapropisms with a straight face while everyone else awkwardly attempts to ignore her verbal blunders. She also wears the self-satisfied smile of someone convinced she’s terribly clever, even elegant. And there’s some irresistible comic business with her wooden hand. A tense tête-à-tête between Dylan and Waxy in her garishly tasteless home (courtesy of set designer David Rockwell), its walls adorned with a bizarre collection of female erotic art, is one of the uneven production’s best scenes.

Sullivan’s direction lacks spark and fluidity, making the play feel overlong at two hours-plus. Though his work does come good in the dynamic staging of the live snooker tournament, in which current U.S. national champion Ahmed Aly Elsayed showcases his moves alongside creditable cue skills from Schnetzer. The use of overhead video brings the audience closer to the action, and the deadpan commentary of two unseen announcers, one of them seemingly channeling bone-dry Alan Rickman, adds another layer of droll humor. It’s one of the rare cases in which sports on stage actually works.