Natalie Portman says all of her activism is related — fighting for the environment as a vegan and fighting for gender equality as a supporter of Time’s Up.

“It’s all under the same system,” the actress told The Hollywood Reporter at a recent screening of the documentary Eating Animals, which she narrates and on which she also served as a producer. “It’s not an accident that women are treated in a different way in our society, and our Earth is called Mother Earth and it’s treated poorly.”

Portman implied that sexism is at play in the agricultural industry, as “dairy cows and hens are female animals that are being treated really torturously. There is a capitalist connection with all of it of making money,” she said before an Oct. 21 screening of Eating Animals at the DGA Theater in Los Angeles.

Released in select theaters in June, the film explores the harmful effects of factory farming via an industrial system that houses thousands of pigs, chickens and cows, often in inhumane and unclean conditions. Eating Animals also documents how large farming facilities pollute the environment with animal waste and contribute to antibiotic resistance by relying on medicine for crowded animals. It follows in the tradition of other environmental exposés, from Leonardo DiCaprio’s Before the Flood (2016) to Kip Andersen and Keegan Kuhn’s Cowspiracy: The Sustainability Secret (2014).

Portman also contextualized the documentary within today’s political polarization, saying that many people associate veganism or animal-rights activism with liberalism, “but it’s funny because it’s actually quite conservative in the take.” Eating Animals advocates for returning to “old ways” of traditional family farming and small businesses, as opposed to the modern, corporate ownership of 99 percent of farms.

A vegetarian since childhood and vegan for the last several years, Portman’s idea for the doc was first activated by the 2010 book Eating Animals by Jonathan Safran Foer (author of Extremely Loud & Incredibly Close). Portman “already felt the injustice” but didn’t know the extent of the impact on the environment and human health. Once Foer gave her permission to produce the film, she started looking at directors. Portman had seen the 2006 documentary God Grew Tired of Us about the Sudanese lost boys and asked director Christopher Dillon Quinn to come on board.

Involved from the “inception” of the doc, she secured financing and talked out ideas with Foer and Quinn, who said they met in Foer’s backyard in Brooklyn to discuss translating Foer’s “quasi-memoir” onto the screen. Quinn spent five years interviewing farmers, water keepers and activists battling against “ag-gags” that limit public information about the farming facilities.

Then Portman returned as narrator to “bookend” her role, she said, using pronouns like “we” and “I” in the dialogue to show that “the responsibility is on us. It’s not going to be our government,” Quinn told the audience after the screening. 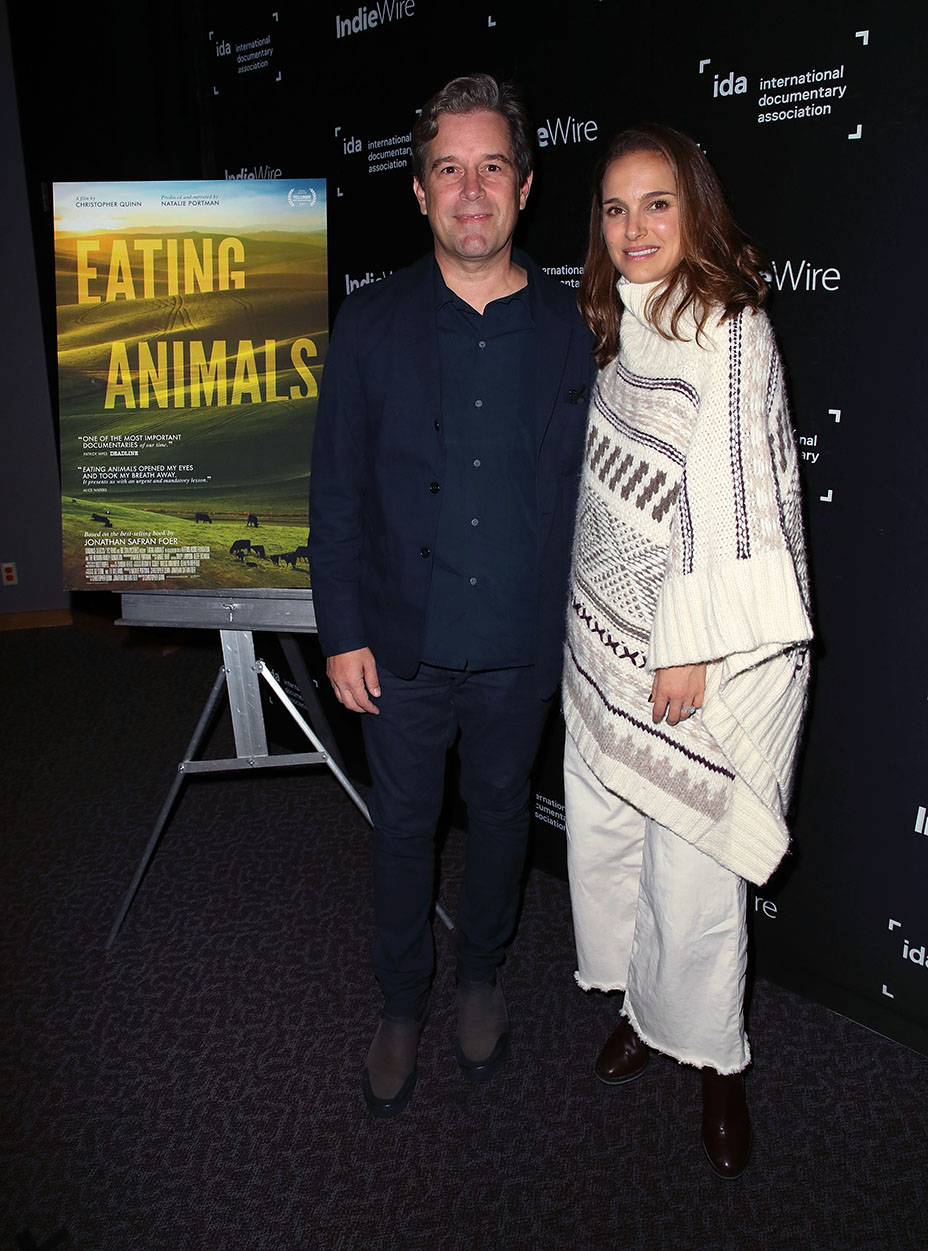 Portman praised Quinn’s “in-depth look into this world” and his emphasis on how farmers are “victimized” by the corporate agricultural system.

“It just seemed like such a massive, broken system that’s also hurting farmers so much, that I really wanted to be part of spreading that message,” Portman said. Indeed, Quinn interviewed Southern farmers who admitted they’d rather be indentured servants, because then at least they wouldn’t be hundreds of thousands of dollars in debt, trapped by Tyson and Purdue contracts.

“They’re being sold seeds by these corporations [so] that they’re almost like serfs to these corporate agricultural entities … I think that was a real eye-opening and also an incredibly human lens to see it through,” added Portman.

Portman hopes Eating Animals raises the issue that “the capitalist ‘bigger is better, more is better’ [ethos] is making us sick.” She calls small farms “a hallmark of old civilizations” and argues we should return to the old model in America.

“It seems like something that should be easily fixable if people wanted to, because it’s not like anything has to be invented. It’s literally like going back to old practices,” Portman said.