The first season of Netflix’s Russian Doll consisted of eight episodes — but for Natasha Lyonne and fellow co-creators Amy Poehler and Leslye Headland, the half-hour dark comedy would be defined by narrative loops. Specifically, which time loop protagonist Nadia Vulvokov, a coder played by Lyonne, was experiencing while reliving the night of her 36th birthday after dying and coming back to life on repeat.

When it came to plotting the continuity of such a mind-bending concept (one that takes inspiration from Lyonne’s true story), the all-female writers room devised an intricate web of interconnected storyboards for Nadia’s adventures. “There were boards and strings — the writers room looked like Homeland or A Beautiful Mind,” says Lyonne.

Before stepping back into a looping session for the forthcoming second season, Lyonne talked about her experimental adventure series, which earned 13 Emmy nominations.

How personal is Russian Doll to you?

Everything I’ve ever cataloged in my life is in that show. The songs, little asides I’ve been keeping notes on, the characters I’ve been meeting along the way and images I’ve collated. It’s a relief that it all had a place to go. It’s scary stuff, jumping into the abyss in the abstract while you’re writing and making it. The editing room is its own horror film! You’re really up against your own mind and have to beat down self-doubt and double down on taking a risk on yourself and that it’s a good idea even when everyone’s saying, “Are you going to be able to pull this off?” The excitement of seeing that people were really noticing all the Easter eggs is an indescribable thing.

You didn’t watch yourself on Orange Is the New Black because you said you didn’t want to self-correct your performances. How did you handle that when it came to Russian Doll?

It’s very different than watching something you have no control over. I’m not at Sundance watching Die, Mommie, Die! and seeing myself and thinking, “Why am I doing a Charles Busch impression in this movie?” I remember being struck by that and realizing I shouldn’t be watching these things. If I had been watching Die, Mommie, Die! in the edit, I could have been like, “I can build a character out of this who is specifically doing this on purpose.” In Russian Doll, even if there were moments that I was not necessarily pleased with, I could massage them into making sense. It became more like a game of Tetris or completing a crossword puzzle. 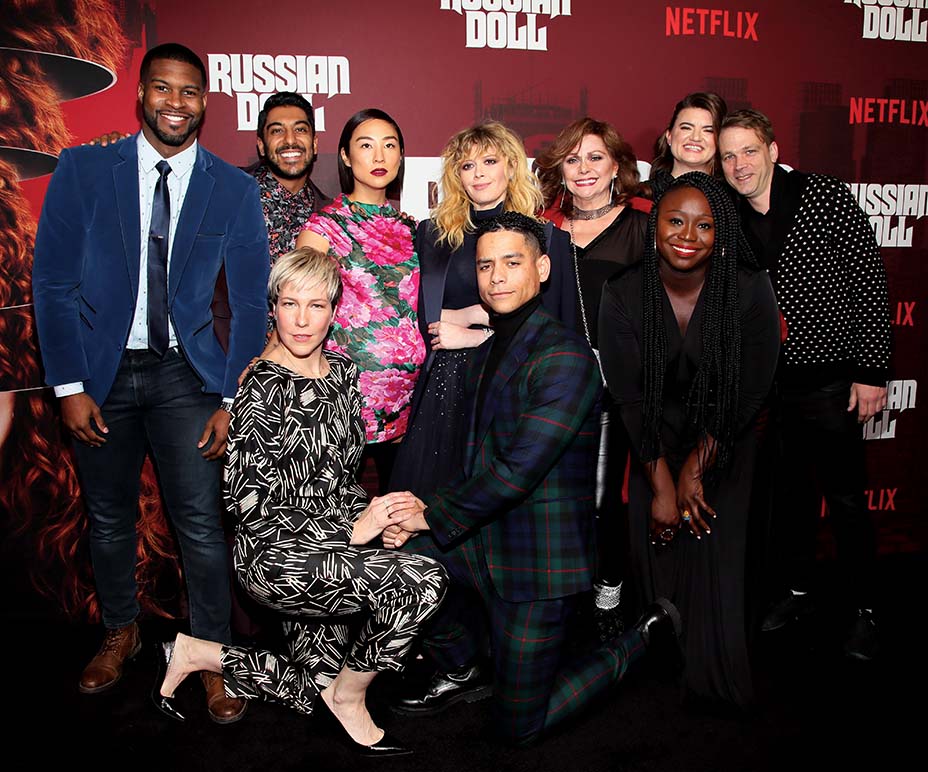 You initially pitched Russian Doll to Netflix as a three-season series. Do you still envision it that way?

In many ways, yes. I see it quite concretely, and it will be interesting to see what evolves. The beauty of the power of the writers room is that Alan (Charlie Barnett) was a very different character in the original pitch and pilot. Month two of the room is where he really came alive. Before then, he had been a whole variety of other figures and now, looking back, imagining that show without Alan is almost impossible. Because of that experience, I know there has to be space left open for something beyond my limited imagination in this moment to know if that is still where the series begins, middles and ends. Maybe it’s only two seasons. Maybe it’s four seasons. Right now, it feels quite clearly that it is those three.

What kind of early ideas do you have for season two?

I think where Russian Doll has been successful is that there’s a very clear sense of character in Nadia so that you can have very high-concept things happen to her, but they always feel earned. They’re backed by some sort of lived experience so they don’t feel like they’re floating in space or completely in the realm of sci-fi. From that perspective, I have some big ideas, and I think this show will continue to work so long as that journey continues to be interesting and worth watching and new. I want to be learning in real time along with her and along with our audience.

What is one thing you learned that you are applying to season two — given all those mind-bending loops?

There is one [mistake] that is so big that none of us has ever spoken about it because we’re all so ashamed. (Laughs.) We corrected it in the edit. Someday when this show is really over, I’ll happily talk about. But it’s our dark, shameful secret. When I think about how hard we worked at the script level and for us to then discover it in the edit? The idea that despite all those layers of protection — where in each phase we were discovering something new — we missed this one thing so glaringly was a real shock to us. If there was something I learned, it was to continue to be able to look at it with fresh eyes. Maybe we need to keep one person in the dark on the whole thing who can read it all down from a distance meticulously in the end. A job called “fresh eyes.” Someone who has never been in the room and who comes in at the eleventh hour, like Harvey Keitel in Pulp Fiction. I’m going to hire Harvey Keitel as the Fixer of Russian Doll, to be the monitor of all loops.

One of four first-time nominees in this race but the only true freshman, Netflix’s Russian Doll kicked off 2019 with mercury-testing heat. The comedy, Natasha Lyonne’s darkly cerebral take on Groundhog Day, ranks as one of Netflix’s most admired originals ever. It’s also been one of the keystones in the streamer’s wallet-busting FYC campaign. But to win the top prize, it will have to overcome three other female-driven vehicles — Phoebe Waller-Bridge’s Fleabag, 2018 winner The Marvelous Mrs. Maisel and the final season of Veep — any one of which might prove to be the dominant nesting doll. —Michael O’Connell

What’s News: ‘Gotta Get Up’ on Those Licensing Fees

Every time Nadia dies, she wakes up at her birthday party where the late Harry Nilsson’s ’70s pop song “Gotta Get Up” blasts in the background. It’s a song that Natasha Lyonne had written into the script, and music supervisor Brienne Rose spent more than a year working on licensing it. “The song is such a fabulous juxtaposition of, it sounds really happy on the surface and almost disorienting,” Rose explains. “But lyrically, it’s really devastating.” Production paid a pretty penny to license the tune from Nilsson’s estate. Each time the song played in the series — even if just for a few seconds — would constitute a separate use, making for a costly final bill. Rose says the team considered replacing “Gotta Get Up” with an easier get, but “nothing resonated in the same way.” In the end, she says they struck a balance between what the series could afford and what worked for Nilsson’s camp. The song plays upward of 12 times in the series, and all uses were packaged in a single synchronization license. But it was worth it for the show and the Nilsson estate. In the first full week after the show’s premiere, streams for the track increased by 2,466 percent, according to Nielsen Music. —Tara Bitran