It’s just over a year since Hamilton invigorated Broadway by looking back to the Revolutionary War to bust out of the mold of the American musical. What are the odds that another equally thrilling show would come along so soon, this one hatched with astonishing powers of invention out of a literary classic set in pre-revolutionary Russia? Writer-composer Dave Malloy and director Rachel Chavkin have been honing Natasha, Pierre & the Great Comet of 1812 in various iterations since this exhilarating electro-pop opera debuted in 2012. It arrives on Broadway in superlative shape, its humor, emotional content and rip-roaring storytelling every bit as vibrant as its madly infectious score.

Right out of the gate, the show has been doing near-sellout business of $1 million-plus per week in previews, perhaps bolstered by the wide fan base of Josh Groban, making a knockout Broadway debut as Pierre, the unhappily married Moscow aristocrat drowning his existential sorrows in booze and books. Although the role has been expanded to take full advantage of Groban’s lustrous vocals, this is very much an ensemble piece, enlivened by flavorful characterizations in the principal roles and off-the-charts energy from the hard-working chorus. No disrespect to the marvelous cast, many of whom have been with the project since its earliest stages, but the true stars are the material and production, which is often as cinematic as it is blazingly theatrical.

The sung-through show was originally commissioned and developed by Ars Nova, the fertile off-Broadway creative hub where it first premiered in a tiny space disguised as a kitschy Russian supper club, serving warm pierogies and vodka. That menu expanded, along with the production, when it moved the following year to two consecutive purpose-built New York venues. The commercial transfer allowed scenic designer Mimi Lien to push the environmental aspect even further, crafting a cabaret boîte in which the performers and musicians moved freely among patrons seated at café tables.

Last year, the creative team negotiated the shift to a proscenium stage in a run at the American Repertory Theater in Cambridge, Mass., keeping the immersive nature of the production intact. The same goes for the $14 million move to Broadway, where the Imperial Theatre has been extensively reconfigured to accommodate onstage seating for 200 at tables and banquettes, while also clearing paths for the cast to get amongst the audience, both in the orchestra and upstairs in the mezzanine.

Off Script: How Denee Benton Survives All Those Stairs in 'Natasha, Pierre & the Great Comet of 1812' (Q&A)

The theater’s makeover is a feast for the eyes. Lien has redone the lobby as a shabby post-Soviet hall plastered with Pussy Riot posters and other Russian-language advertisements, while inside the auditorium is an explosion of red velvet drapery, gilt-framed period artwork and mirrors and a constellation of sputnik chandeliers — just one element of Bradley King’s gorgeous, precision-focused lighting design. The visual impact is matched by sonic jolts, when the presence of strategically placed singers and musicians creates a physical wall of surround-sound. This is arguably the most fully immersive production Broadway has ever seen. I went twice during press previews, seeing it once from the orchestra and again from onstage; each experience is quite different but the show is a blast wherever you sit, with the actors carefully directed to play to the entire house.

Malloy has whittled the story down from about 70 pages of Tolstoy’s War and Peace, providing a cheat-sheet summary and diagrammed family tree in the Playbill for easy reference. The rousing “Prologue” furthers that background work as the cast sings, “Gonna have to study up a little bit if you wanna keep up with the plot,” before breaking down the characters into broad types (“Helene is a slut, Anatole is hot,” etc.). But even without all that drilling, the storytelling is a model of accessible clarity, acknowledging its literary roots (right down to characters occasionally singing of themselves in third-person) but with a witty contemporary spin.

Malloy plays with anachronistic language and 21st century sensibilities just as freely as he harnesses a bewildering range of musical styles into a cohesive whole. And costumer Paloma Young time-travels across the centuries in her resplendent outfits, both for peasants and aristocracy. (Copies of one ensemble member’s fabulous denim Oksana Baiul vest really ought to be on sale at the merchandise stand.)

This kind of historical mashup with a knowing hipster veneer can wear thin in musicals, like the unrelentingly jokey Bloody Bloody Andrew Jackson. But while The Great Comet is often hilarious, the show also develops its drama far beyond the winking intro, forging genuine emotional investment in the characters’ tempestuous lives. 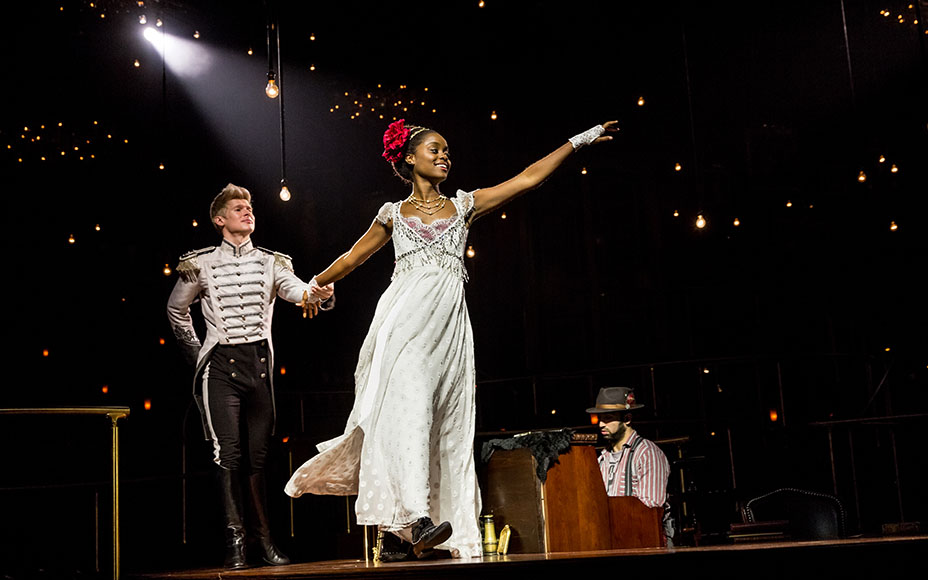 Set on the eve of Napoleon’s invasion of Russia, the story focuses on pretty young countess Natasha (Denée Benton), sent with her beloved cousin Sonya (Brittain Ashford) to stay in Moscow with Natasha’s earthy grande-dame godmother Marya (Grace McLean) while the war against France rages on. Natasha’s fiancé, Prince Andrey (Nicholas Belton), is away at the front, and her first meeting with her prospective in-laws goes badly when Princess Mary, a Debbie-Downer spinster played with sublime dourness by the wonderful Gelsey Bell, takes an instant dislike to her brother’s intended. The feeling is mutual. “Too fashionably dressed, frivolous and vain,” sings Mary. “Too plain and affected, insolent and dry,” counters Natasha.

This is one of many instances in which Malloy expertly molds the music and vocal arrangements to the situation, as the two women sing their discordance: “Constrained and strained.”

Impressionable Natasha gets a taste of decadent Moscow society at “The Opera.” “Grotesque and amazing” is how she describes it, and the staging lets us experience the awe through her eyes. Along with the mesmerizing costume ball that closes the first act, this scene with its accompanying modern-dance pas de deux reminded me of the 1980s music videos of Annie Lennox, in which she merged pop with performance art while playfully riffing on period physical mannerisms. The work of director Chavkin and her design team is breathtaking here, as it is in the explosive rave that depicts Moscow nightlife, with the ensemble dressed as bacchanalian club kids.

A fixture on this scene is Pierre’s immodest wife Helene (Amber Gray, divinely lubricious), whose brother Anatole (Lucas Steele, so wickedly sexy he should be arrested) is a preening peacock with a platinum-blond faux-hawk, given a flashy rock-star entrance. After surveying himself approvingly in the mirror, the licentious cad then casts a covetous eye on Natasha, launching into a hypnotic seduction song underscored by an insidious bass beat. (This is the rare musical in which percussion is frequently as important as melody.) Anatole is already married but keeps that detail quiet to avoid cramping his style. Meanwhile, Helene’s flirtation with Dolokhov (Nick Choksi) risks getting her husband killed in a duel. That scene yields the first all-out display of Groban’s virtuoso vocals in the soaring soliloquy “Dust and Ashes,” in which Pierre concedes that he’s dead inside and longs to wake up. The sudden burst of celestial harmonies from around the house gave me chills.

Josh Groban to Make Broadway Debut in 'Natasha, Pierre & the Great Comet of 1812'

With all the exposition in place, the show then becomes a gripping, high-stakes melodrama, as Natasha decides to break off her engagement and elope with Anatole. The second act opens with loaded correspondence in “Letters,” a killer number you immediately want to hear again. But then Malloy goes one better with arguably the musical’s most beautiful song, “Sonya Alone,” a declaration of friendship and loyalty in which Natasha’s cousin vows to stop her from ruining her life. No praise is adequate for Ashford’s heart-rending performance, her vocals summoning a raw, soulful quality that recalls ‘60s folkies like Joan Baez. I would see the show many times over for that one song alone.

Events accelerate as the formidable Marya gets wind of the plan and blocks her goddaughter’s flight, enlisting help from Pierre to control the fallout. In a structural gambit that might have become monotonous in a less adventurous composer’s hands, Malloy parses this action in a succession of duets all involving Pierre — in adversarial mode with Anatole, consolatory with Andrey and then achingly tender with Natasha, this last accompanied only by music director Or Matias‘ delicate piano.

Benton is at her loveliest here. Natasha’s girlish giddiness is erased by humbling experience, her gratitude becoming quite moving as Pierre reveals the compassionate depths of his feelings. And Groban (wearing padding as stout Pierre, and taking occasional turns at the piano and accordion) is simply magnificent, hitting new heights of impassioned dramatic expressiveness in each song. His final aria is delivered with quasi-religious fervor to the comet of the title, and despite the simplicity of the effect, he makes you believe you can see that wonder in the night sky. Embroidered with stunning choral elements, it’s a perfect ending, echoing Natasha’s enchanting song to the moon in the first act.

Chavkin’s direction is a marvel of intricacy, with simultaneous action happening in multiple spots, often augmented by Sam Pinkleton’s choreography, which peaks in the riotous coachman’s song, “Balaga.” There’s sometimes more going on than the senses can fully register at one time, and yet the effect is intoxicating, never exhausting. That’s also due to the sophistication and complexity of Malloy’s ravishing score, which has been generally categorized as electro-pop but actually suggests a far wider-ranging set of influences in its incorporation of everything from trip-hop to ethnic folk to waltzes; from Schoenberg-esque 20th-century modern atonality to the Leonard Bernstein of Candide and beyond.

Natasha, Pierre & the Great Comet of 1812 is never going to capture the popular imagination or draw the insane media attention of Hamilton, with its reflections on American political history and cultural identity. But this maverick show and its boundlessly inventive production are no less audacious or satisfying in their bid to rejuvenate the American musical. Don’t miss it.