Continue to The Hollywood Reporter SKIP AD
You will be redirected back to your article in seconds
Skip to main content
September 20, 2017 6:35am

The network and studio behind This Is Us took out a full-page ad in Wednesday’s issue of The Hollywood Reporter to allow Brown to finish his Emmy speech after he was cut off midway through.

Brown, who won for best lead actor in a drama series for the tearjerker drama, was played off before he was able to thank the writers on the show, series creator Dan Fogelman (whom he calls “the Hebrew hammer with which our house is built” in his full speech), “crazy cool” executive producer and director Ken Olin, and his manager of 17 years, Jennifer Wiley-Stockton.

However, it’s the end of Brown’s full speech that may have readers pulling for the tissue box. He goes on to thank his wife, Ryan Michelle Bathe, and their two sons. “Your daddy loves you with the strength of 1,000 suns,” he writes. Brown also makes light of his brief time onstage in his written speech, writing, “They cut me off before I got to thank my wife, man!”

Onstage at the Microsoft Theater on Sunday, Brown tried his best to fight through the music, but to no avail. “You can play, you can play,” he told the band before commenting to the crowd that “no one else got that loud music.” He then exited the stage.

Brown, an Emmy winner last year for his portrayal of Christopher Darden in The People v. O.J. Simpson, was also given the chance to finish his speech backstage at the Emmys in the press room. Watch that video below.

Brown made history with his second Emmy, becoming the first black actor to win best actor in a drama series since Andre Braugher’s 1998 win for his performance in another NBC drama, Homicide: Life on the Street. Brown made reference to Braugher’s Homicide character, Frank Pembleton, as well as other iconic TV characters like Walter White (Breaking Bad‘s Bryan Cranston), Dick Whitman (i.e., Don Draper, played by Mad Men‘s Jon Hamm), and Gina and Martin of the ‘90s sitcom Martin.

The win was also big for NBC, which last scored a victory in that category when Kyle Chandler won for the final season of Friday Night Lights in 2011. 20th TV had a more recent win in that category with Homeland’s Damian Lewis in 2012.

This isn’t the first time Hollywood insiders (and in some cases, outsiders) have used Hollywood Reporter ads to get their message across. In 2015, prolific showrunner Kurt Sutter canceled his FX period drama Bastard Executioner via a THR ad. Most recently, an angry group of Homeland viewers took out an ad to voice their issues with the death of character Peter Quinn, among other things.

Check out the full ad below. 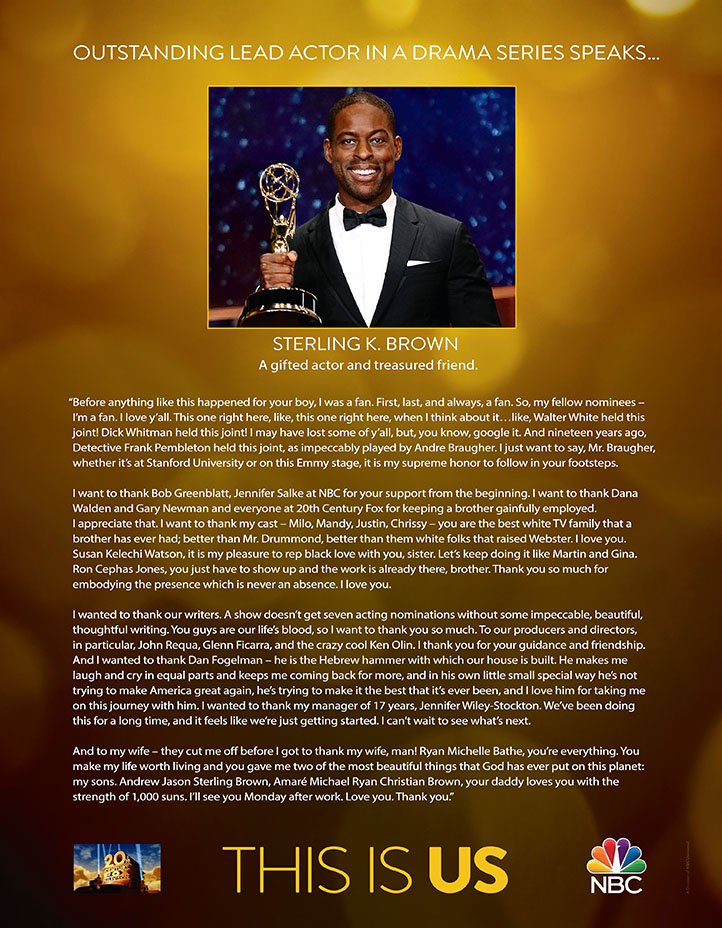