On Jan. 14, NBCUniversal CEO Steve Burke divvied up his empire between two top executives, Jeff Shell and Mark Lazarus. The move, which was accompanied by long-expected news of an NBCU streaming service (to be launched in 2020 and run by another company veteran, Bonnie Hammer), was notable in that it hinted at a succession showdown.

Until now, little has been said publicly about Burke’s intended timeline as CEO of the media behemoth that houses everything from the Minions to MSNBC. And while multiple insiders say they wouldn’t be surprised to see him re-up when his contract expires in 2020, almost all suggest the latest realignment gives Burke, 60, options when he does decide to move on.

In an interview with The Hollywood Reporter, Burke was quick to downplay an internal bake-off, a setup that has proved a major distraction at media rivals like Warner Bros. “This is primarily about setting ourselves up for OTT and giving [Shell and Lazarus] more responsibility,” Burke said, adding with emphasis: “I’m not going anywhere.”

Still, as one former NBCU exec puts it, the shake-up is “very much about saying Mark and Jeff are the guys.” Of course, much could change for the landscape, the company and the two execs between now and whenever Burke does leave. “It’s not necessarily a static picture,” says one source, who also notes the risk of publicly earmarking successors years in advance, as Disney’s Bob Iger learned with Tom Staggs.

What is clear: Both Shell, 53, and Lazarus, 55, are fiercely loyal to Comcast-owned NBCU and highly regarded by Burke and their respective staffs. If a succession decision had to be made today, however, many say Shell is better positioned for the job given his body of experience, from TV and film to international and parks; though Lazarus, long the “sports guy,” will now get a crash course with cable networks and news added to his purview.

Burke first brought Lazarus on board in early 2011 to run NBC’s cable sports assets. He was quickly promoted to chairman of NBC Sports after the abrupt resignation of Dick Ebersol, who had for decades run the division with an impresario’s flair and an open checkbook. Low-key and reserved, Lazarus cut a much different profile. “I come from a more rigid business background than he did,” Lazarus once told THR. “He’s art and I’m commerce. My job is to do the best we can mixing art and commerce.”

In that time, Lazarus has led the transformation of NBC Sports from a linear portfolio to a robust digital business. The nearly $8 billion NBCUniversal paid to lock up the Olympics until 2032 includes all digital rights and rights for whatever technology might emerge. Such mega-pacts also put Lazarus in close concert with Comcast CEO Brian Roberts. His star continued rising, with his portfolio expanding again in 2016 to include NBC’s owned and affiliated stations. And the move last summer to bring in former PGA of America golf CEO Pete Bevacqua as president of NBC Sports signaled that Lazarus would be elevated still more.

Those who have worked with Lazarus describe him as “a very unemotional, pragmatic leader.” And, to the likely relief of his new cable-side reports, one who “lets creative people do their thing and understands how to manage creative people.” On the news side, where NBC has weathered a series of negative headlines over Megyn Kelly and Matt Lauer, insiders do not anticipate Lazarus making any near-term leadership changes. Though NBC News president Andy Lack will now report to him, Burke expressed his full support of Lack for doing what he calls “a great job.”

Shell, for his part, has enjoyed a similar ascension, having previously described his career, first at Comcast and more recently at NBCU, as being “parachuted into new businesses and trying to figure out what I need to do with those businesses.” One former colleague suggests that willingness to bounce around is a key to Shell’s success. “There’s a general recognition that if you’re too overtly political and you’re not a team player, you’re not going to get very far [under Burke],” the exec says. “Steve manages as a team, and Jeff, more than anybody, plays the long game.”

Shell’s most recent crash course came in film, with Burke’s 2013 decision to make him chairman of Universal Filmed Entertainment despite having no hands-on moviemaking experience. Rather than big-foot in, Shell relied on studio boss Donna Langley to guide the creative side while he focused on shoring up and growing the studio’s international footprint, consumer products and other business operations. While maintaining a low profile, Shell engineered the $3.8 billion acquisition of DreamWorks Animation and worked with Ron Meyer to strike a partnership with Steven Spielberg’s Amblin Entertainment. “He’s not pretentious,” says a Universal insider, “and people appreciate that.”

Under Shell’s watch, Universal Pictures entered an era of stability and prosperity despite owning far fewer franchises than rival Disney. In 2015 and again in 2017, the studio enjoyed its most profitable years ever (twice crossing the $5 billion mark in global box office), buoyed by the relaunched Jurassic World franchise and Fast & Furious series. Its fortunes have since slipped a bit, to $4.86 billion in 2018.

With the latest news, Shell will add responsibilities including broadcast entertainment to his purview, without stripping any away. Of course, given his past experience in TV, he’s better equipped to parachute in, even if listening and learning will be required. The latest elevation, it should be noted, bodes well for Langley, too. Though Shell was never known to meddle in her decision making, sources suggest that a few times a year he would veto projects she wanted to make, often on economic grounds. Those same sources say Langley will now have sole greenlight authority for smaller- to moderate-budget films.

Left out of any succession talks is longtime cable czar Hammer, though, as many note, the 68-year-old herself has suggested she likely only wants one more contract extension. Instead, the highly respected exec, who consistently has delivered revenue and profit growth even as the cable business has nosedived, will now be tasked with building out the streaming service. To ensure that it’s priority No. 1 for Hammer, as it is for Burke and NBCU’s fate, she was stripped of her prior responsibilities.

Though putting a traditional programming vet at the helm of an OTT service raised eyebrows, Burke made clear he’ll be relying on the team that launched Sky’s OTT platform in Europe, Now TV, for its technical aspects. Hammer will build out a team focused on programming and marketing the ad-driven service, which will be sold primarily as an add-on for existing Comcast customers. “There’s no better brand person than Bonnie,” says one NBCU exec, adding that running cable networks, which will now fall to Lazarus, is about “managing decline.” 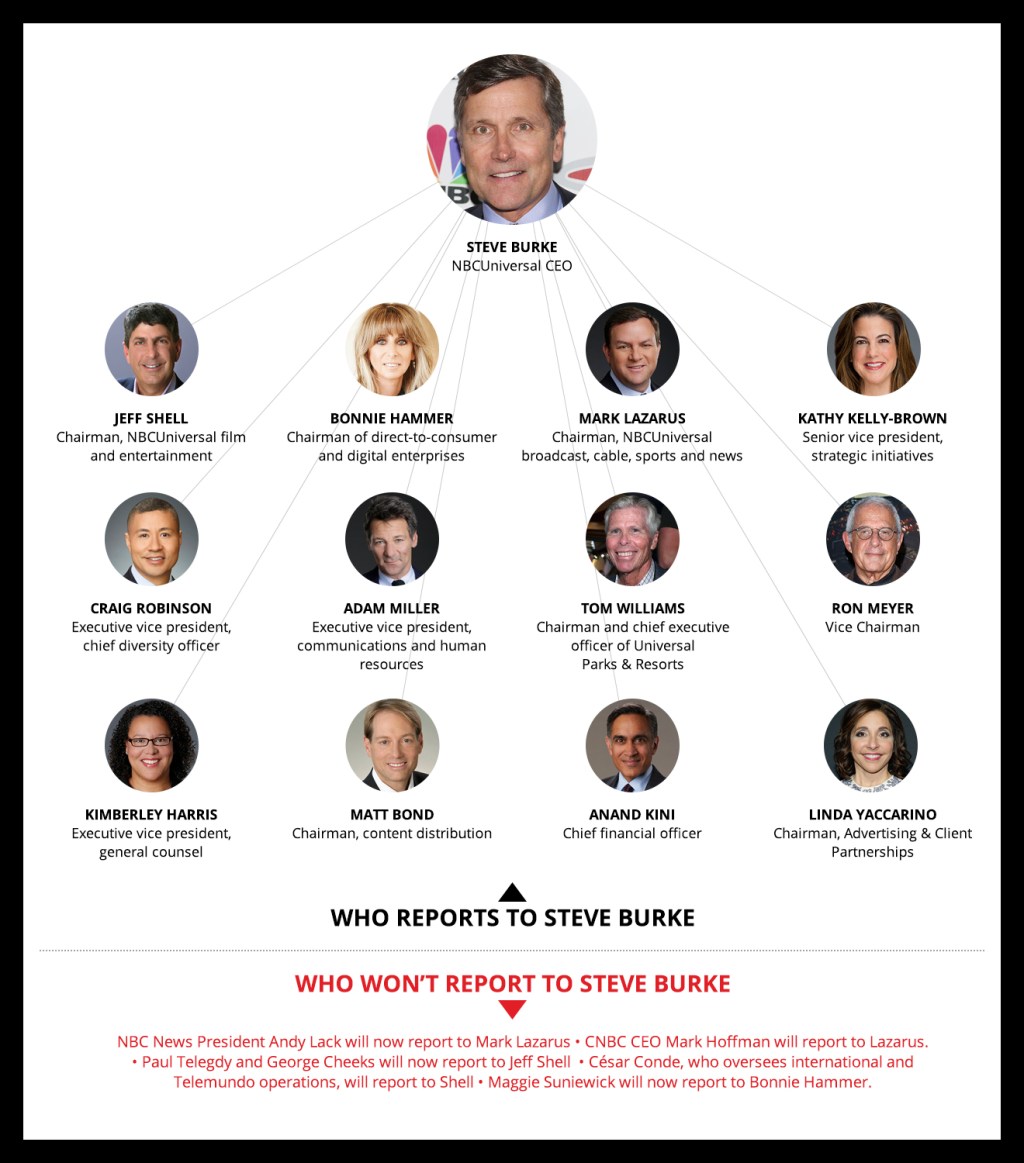 This story first appeared in the Jan. 16 issue of The Hollywood Reporter magazine. To receive the magazine, click here to subscribe.

How Bold Will NBCUniversal's "Low-Risk" Streaming Bet Actually Be?