“Don’t you see, the American people want someone to articulate their rage for them,” says Diana Christensen, the ferociously driven television programming executive in Network, in a rhetorical question exponentially truer today than when Paddy Chayefsky wrote his Oscar-winning screenplay for the 1976 Sidney Lumet film. The steady erosion of the line separating news from entertainment has long since come to pass, as has the demeaning spectacle of train-wreck reality TV and the rise of the fulminating commentator with no use for detached objectivity. And let’s not even start on the consecration of corporate rule as the one true religion. The satirical sting may have been blunted by time, but the prescience is indisputable.

Who knows how Chayefsky, who died in 1981, would have responded to the populist fury that gave us the Trump administration, the bloviating Republican Party mouthpieces of Fox News, the liberal attack dogs of MSNBC and CNN, or the advent of the satirical newscast, from Jon Stewart through John Oliver, as a more trusted information source for many on the left than the supposedly straight news hours. What remains clear, however, is that the writer was definitely onto something, and while his taste for windy oration can grate, his caustic immorality tale proves a trenchant fit for the stage in this boldly inventive adaptation from director Ivo van Hove and playwright Lee Hall.

That’s especially true with the volcanic Bryan Cranston giving a gut-wrenching performance in the pivotal role of Howard Beale. This is a vigorously inhabited, freshly minted characterization, quite distinct from the disheveled Biblical doomsayer that won Peter Finch a posthumous Oscar in the movie. Cranston’s Howard seems lucid and laser-focused even when he’s staggering around in his underwear hearing voices, or weeping at the corrosive hypocrisies that compel him to speak up. You can’t look away as this respected career anchorman, past his expiration date, navigates the seismic shifts from professional humiliation through embittered desolation, at the same time stumbling into self-reinvention as a messianic visionary and unlikely ratings sensation. It’s a thrilling performance.

“The mad prophet of the airwaves” is how Chayefsky’s screenplay dubbed Beale, and it’s telling that Hall drops the “mad” descriptor. The character has always been as much an oracle as a crackpot in the throes of a nervous breakdown. Sure, he’s unfiltered and unhinged, but his rants are fueled by a hard core of truth in his damning indictment of the irresponsibility of television and the corruption of American corporate, cultural and political life. But his appalled revelations about the country being in the pockets of Saudi Arabia or even a passing reference to Russia now cut way closer to the bone. The fact that Hall’s work on the text involved more filleting than rewriting makes Chayefsky’s observations seem all the more far-sighted. 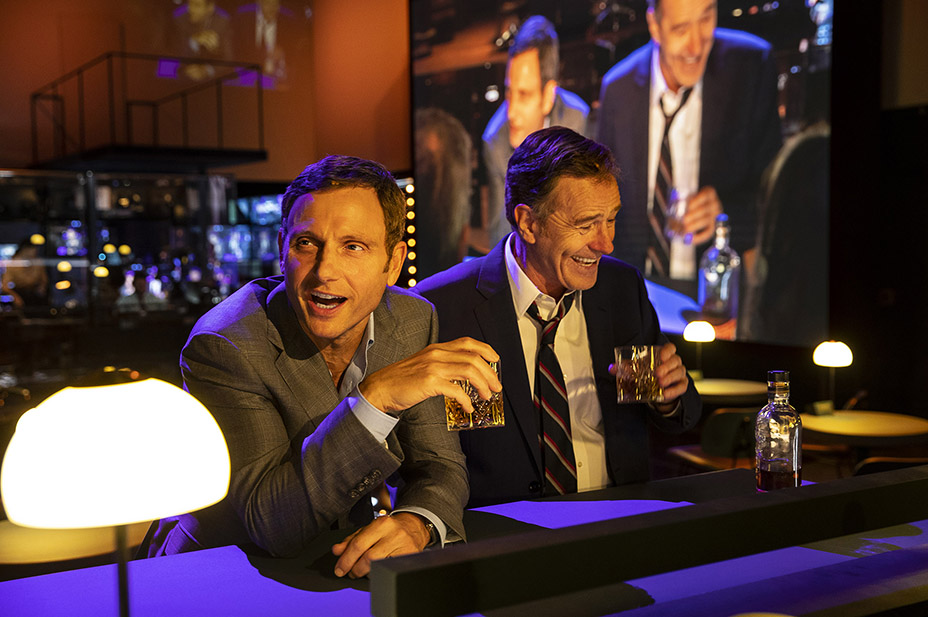 What hurts the writing at 40-plus years’ distance is that by remaining locked in the 1970s, it arguably doesn’t go far enough. Most of the charges leveled at television are now literally old news. They are more likely to raise a wry grimace or an eye-roll of resigned acknowledgment than any genuine shock, especially since “the tube,” as it’s referred to here in period jargon, has been far surpassed by the internet and social media as a vessel for distorted information and roiling rancor. Even more so as a force of cultural isolation. When Howard, in one of the script’s more facile broadsides, spouts dire judgments about television turning us into humanoids incapable of thinking for ourselves, it’s clear he hasn’t been on Twitter lately.

Still, as a real-world horror show about the profits to be reaped by accessing popular anger, Network remains gripping, largely because Cranston makes his character’s tragic trajectory a white-knuckle ride, and van Hove infuses the drama with dizzying kinetic energy. The play’s opening dives right into the frantic preparations for the evening news broadcast on the flagging, fictional UBS network, with crew dashing about as Eric Sleichim’s churning cinematic underscoring cranks up the urgency. Onstage camera operators beam live footage of the hive of activity onto a rear screen above the studio floor, where vintage commercials and other programming compete for our attention. It’s a full-on sensory assault, and the production is at its best when it sustains that daring level of hysteria.

Howard begins the broadcast with his standard greeting, and the first thing we note is his old-school enunciation, as if he’s delivering the news for lip-readers. He retains that crisp professionalism whether he’s reporting on the capture of Patty Hearst, updating viewers on the attempted assassination of President Ford, or — after learning he’s been fired due to poor ratings — announcing his intention to blow his brains out live on the air.

The mordant humor of that bombshell is heightened by the fact that almost nobody behind the gleaming glass walls of the production booth was paying enough attention to catch it until the alarmed floor manager points out what just happened. Even more hilarious is the resulting pandemonium when they return from a commercial break and a defiant Howard is still clinging to his news desk while production personnel physically struggle to get him off camera before the video feed is cut and a “technical problem” message flashes up on the screen.

While corporate overseer Frank Hackett (Joshua Boone) demands that Howard be instantly taken off the air, the veteran anchor appeals to the sense of loyalty of his old buddy and news division chief Max Schumacher (Tony Goldwyn), asking for a chance to go out with dignity by reading a script-approved apology. But once the cameras are rolling, Howard goes rogue, railing about the epidemic of bullshit afflicting society and trashing religion, marriage and the so-called nobility of man in the process. His profane primetime outburst yields unprecedented editorial coverage and a five-point ratings jump. That prompts ambitious Diana (Tatiana Maslany) to step in, convincing Hackett to keep Howard on the air, while angling to wrest control of the news hour away from Max. 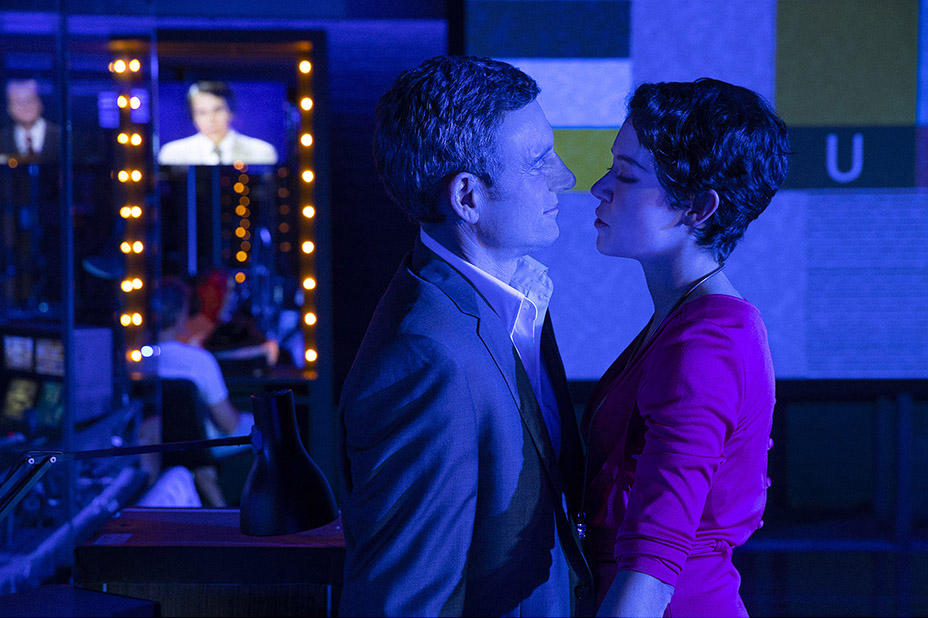 Working with his longtime set and lighting collaborator Jan Versweyveld and regular video designer Tal Yarden, van Hove uses technology with diabolical brilliance to advance the play’s thesis about multinational conglomerates employing media as a dehumanizing tool, to reshape our over-stimulated minds — and by extension to control our advertising and investment dollars and direct our political thinking. “What exists is the endless primordial movement of money,” corporate overlord Arthur Jensen (Nick Wyman) tells Howard in a God-like appearance in which he exalts the almighty power of a globalized economy. That message is subliminally reinforced throughout in the constant barrage of video turning us all into mindless believers.

The play — which runs an intense two hours with no intermission — is most persuasive when the multiplying images on the main screen and monitors around the theater are trampling any notion of separation between private and public worlds. One especially dexterous cut to a wide shot of us in the audience draws gasps, making everyone complicit. With so many multimedia elements both prerecorded and filmed live, this must have been a hellishly complicated production to plan; its complexity is breathtaking.

Howard’s is not the only face beamed up on a screen. Intimate off-air moments frequently are played in unseen corners of the stage, in barrooms, boardrooms, bedrooms and the studio control room, exposed via all-seeing surveillance.

Van Hove’s most audacious stunt is to have a roving handheld camera film a talky foreplay scene between Diana and Max outside the theater on West 44th Street, with random New Yorkers, tourists and even a sidewalk skateboarder passing by the night I saw the show. They then enter the building, accompanied by the camera through backstage corridors before completing their sexual congress right alongside the diners at a functioning onstage restaurant, with Diana feverishly talking programming until she reaches orgasm. The eatery serves paying audience members and is mainly a distraction, though a shaky case could be made that it helps reinforce the idea of Howard’s screeds connecting directly with the people.

The material shows its age most in stretches where the focus pulls away from Howard into the melodramatic subplot of Max’s doomed affair with Diana and its devastating effect on his 25-year marriage to Louise (Alyssa Bresnahan). The husband-and-wife confrontation earned Beatrice Straight an Oscar as Louise, in what was pretty much a single-scene role. Here, it’s ineffectual, a humdrum detour away from the main event. 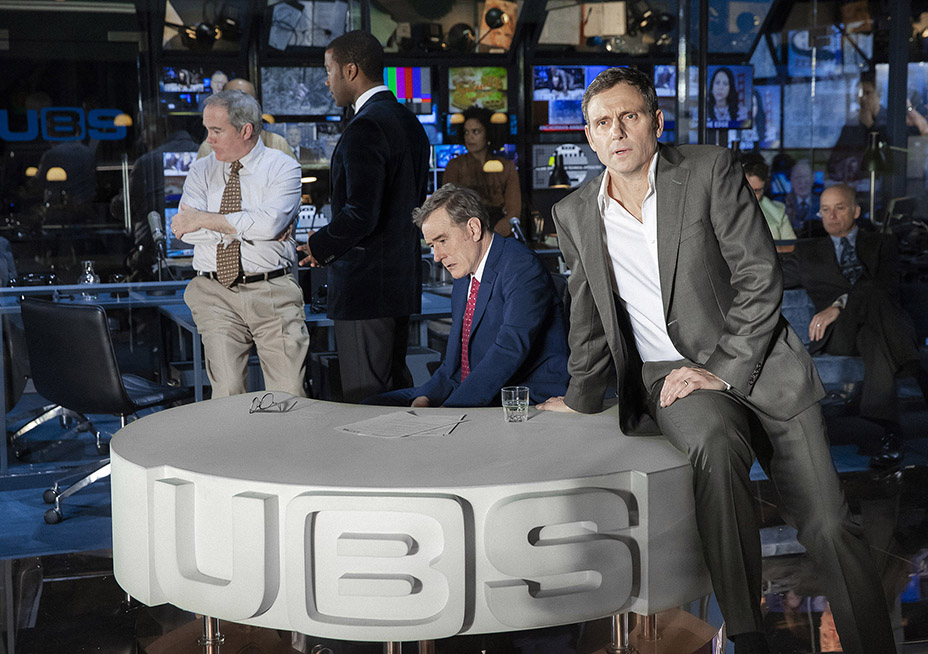 Though he looks a far less craggy candidate for midlife crisis than his screen predecessor William Holden, Goldwyn gives Max a worldly authority, and his character serves to represent the old-guard integrity of journalists like Edward R. Murrow and Walter Cronkite. But he’s sidelined in the story and has little to do but mope around emotionally remote Diana, making speechy pronouncements about the television generation. A miscast Maslany doesn’t help. While Faye Dunaway, who collected another of the film’s Oscars, made Diana an icily seductive neurotic in one of her grand scenery-chewing turns, Maslany lacks the character’s manic hunger. Her costumes and hair make her look like a dorky kid, an impression the wan performance never quite overcomes.

Michelle Dockery played the part opposite Cranston in London, where the production originated last year at the National Theatre, and critical reaction to her performance was muted. Perhaps Diana, a young woman so consumed by power and success she feels nothing, is now an impossible role to play without veering into an ugly cartoon, and by dialing it down Maslany remains unconvincing. The juiciest part of Diana’s original arc — she courts urban terrorist groups for a weekly show built around actual crimes — has been so pared down it might as well have been dropped.

But this is in every sense The Howard Beale Show, even before that hopped-up version of a current affairs hour becomes the number one program on television. And Cranston’s magnetic presence has more than enough electricity to surge through the play’s weak spots. His delivery of the famous “mad as hell” soliloquy is an act of agonized enlightenment, an astonishing tour de force unlikely to be topped by any performer on a Broadway stage this season.

Anyone familiar with the movie will be prepared for the bleak malevolence of the ending. But van Hove and Hall save their most significant addition for last, replacing Chayefsky’s omniscient narrator with a coda in which an out-of-body Howard warns of “the destructive power of absolute beliefs.” Given the adaptation’s shift to make Howard its monumental center, plus the fact that Cranston blows everyone else off the stage, it’s fitting that he has the final word.