The original Boy Wonder is all grown-up and looking for a new beginning … and in this week’s issue of DC Entertainment’s Nightwing comic book series, he gets one, courtesy of a new creative team and a new villain who’s come out of hiding to make life difficult for Dick Grayson.

Nightwing No. 35 sees the arrival of writer Sam Humphries and artist Bernard Chang on the series. It’s also the first chapter in a storyline called “The Untouchable,” which introduces a villain called The Judge, who can seemingly corrupt anyone he wants. How that’s going to change the world of the one-time Robin will unfold across the next few months, but Heat Vision had the chance to talk to Humphries and Chang about their approach to Nightwing, and everything around him.

Sam, I know you’re a big Dick Grayson fan. What is it about the character that you love so much?

Sam Humphries: The DC Universe is built on legacy, and I think Nightwing has one of the strongest connections to legacy; he’s one of the oldest characters in the DCU, but if you are a comic fan, you can literally grow up with him inside the DC Universe. He can almost function as a reader identification character in a world of Superman and Wonder Woman; he’s a character the reader can really identify with, and there’s something really powerful and a lot of fun in that.

Something that really comes across is how moral Dick is, and also that he’s now living in a city where flawed morality is the norm. How important is exploring that morality to the series, and to Dick as he evolves?

Humphries: I think you nailed it. One reason why I kept gravitating towards that is that Dick Grayson is a lifer; he’s barely had any life outside of being a superhero, or a crimefighter, or a detective. At least Superman and Batman and other characters came to it as adults, but this has been his whole life. Balancing the extreme responsibility of bearing that on his shoulders with just being human is something that I really wanted to zero in on with Dick.

Bernard Chang: It’s a powerful story, because he started as a superhero at such a young age, but at the same time, he’s branching out and becoming an adult. What is he going to? What are the avenues available to him to come out of Bruce Wayne’s shadow?

Bernard, something else that really comes across in these first two issues is the acting of your characters, and how much personality comes over from them. How did you approach the physicality of Dick, and the other characters in the book?

Chang: I think there’s a gracefulness to Dick, but at the same time, there’s an athleticism, especially with his upbringing as a trapeze artist in the circus. I really look at him as an athlete. Watching an athlete move in slow motion, I’m trying to capture some of that energy in the artwork.

It is a particularly visually dynamic, energetic book. I mean, the first page of the first issue is literally Dick in mid-air, having jumped from the top of a building.

Chang: I think that’s reflective of the team as a whole — Sam, myself, and Marcelo [Maiolo] on colors. We’ve hit the ground running. With page one, I think we clicked, I think we’re firing on all cylinders. It’s not just myself or Marcelo with the artwork, it’s also the strategies and plays that Sam has worked out with us.

Bludhaven, we’re trying to show it as a counterpart city to Gotham. We had lunch, before we started working on the book, before we’d even put pencil to paper. Sam had this idea of comparing [Dick Grayson’s home city] Bludhaven to Vegas, with the lights and pageantry and energy, and one of the first things that came to my mind was the city of Macau, and how that’s almost like an island in itself, with tall buildings and casinos and excess.

Where did the Justice Tree come from? It’s a new concept that both balances out the avarice of the casino-esque side of the city, and helps flesh out the city in its own right. It’s the kind of detail that feels real.

In these issues, we flash back to Dick’s time as Robin and as a detective in Hudson University, the first two times he comes across [the villain of the story] the Judge, and we almost document on the development of Bludhaven. The Justice Tree was inspired by this tree in Austin, Texas, called the Treaty Oak, which has existed longer than any modern city in America. The Justice Tree becomes a touchpoint for Bludhaven; the tree is always there, no matter what happens to the city.

Even though you drive a limousine into it in your first issue. 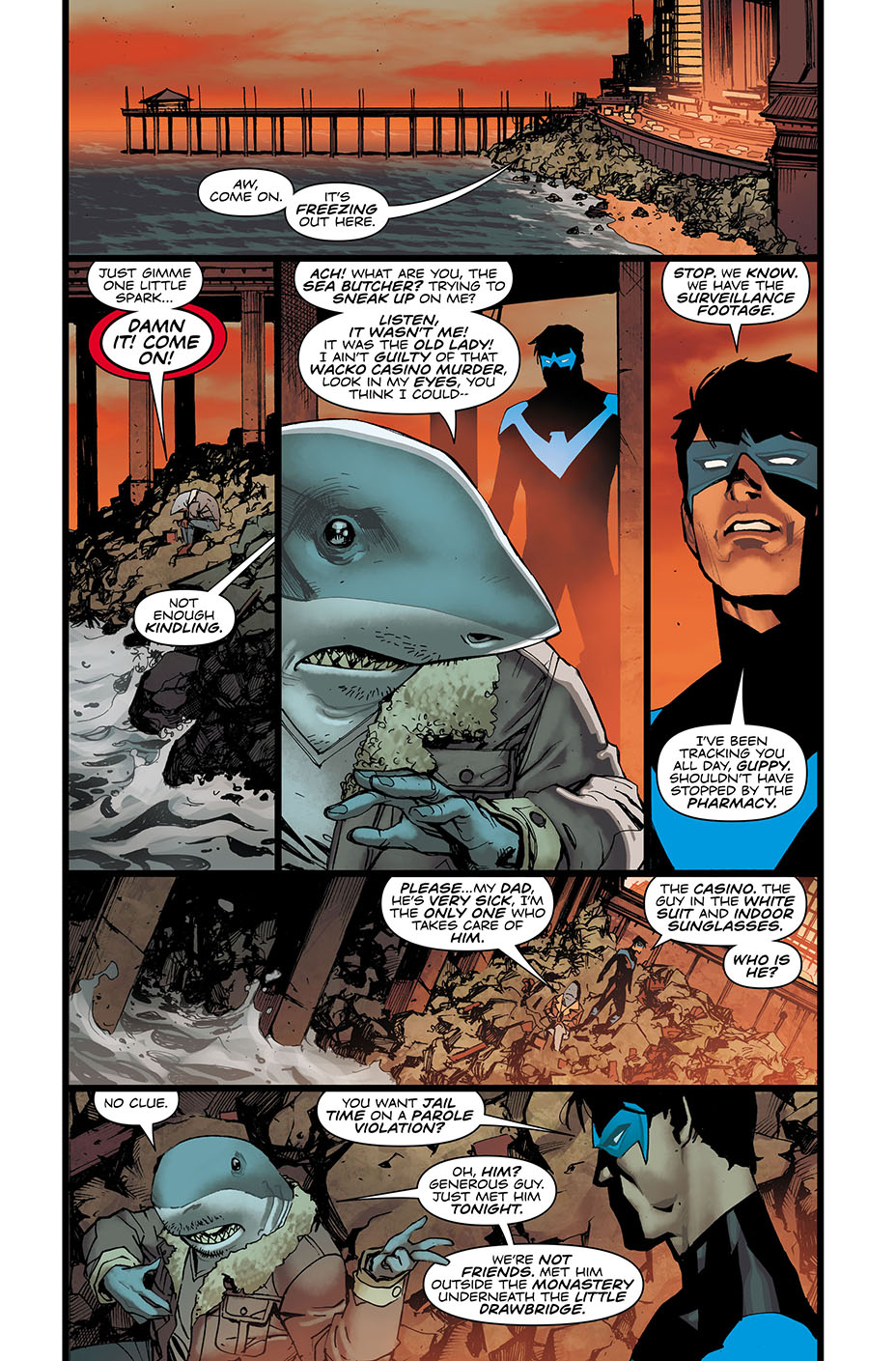 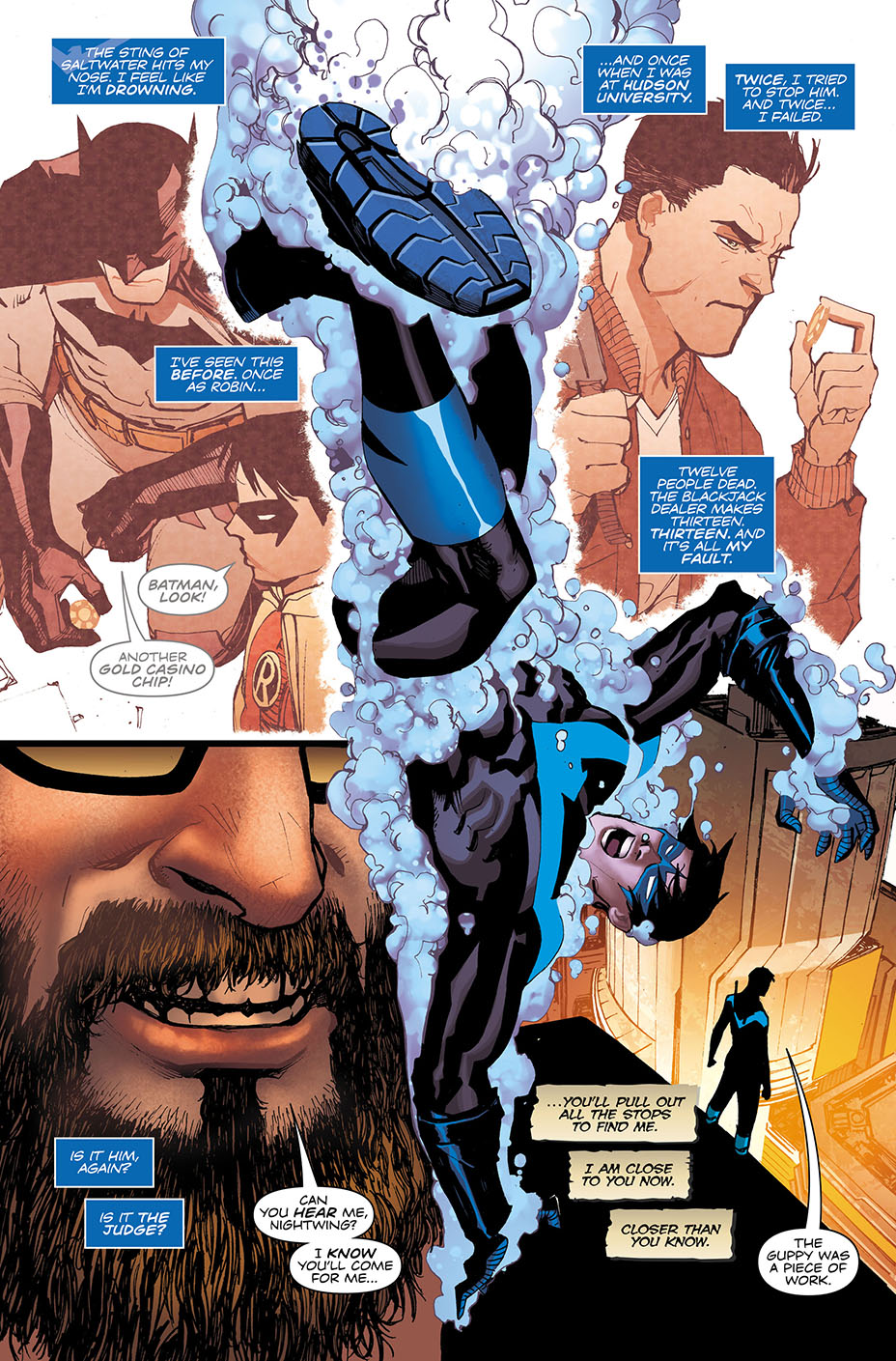 Talking of the underclass of the city, I have to ask about new castmember Guppy. He’s someone who it’s easy to feel for, because he’s trying to do the right thing in the worst ways possible — and he also happens to be a shark man.

Chang: Guppy was a lot of fun.

He has this wonderful look — the jacket, the stubble — that is unique and fully rounded in a way that makes him come across as particularly believable. Where does it come from?

Humphries: Guppy was a huge risk. He came about really early, working with Bernard, and I wasn’t really sure it was going to come off. Chris Conroy, and our editors, really responded to Guppy and were really nervous. The feeling was, be careful with Guppy. If you nail it, it’s really going to come off, but if you blow it, it’s going to look really stupid. (Laughs.)

A lot of thought went into him. We looked at how a shark moves, what a shark looks like, and that wasn’t helpful at all. (Laughs.) And then we looked at, apart from being a shark, what kind of examples of that kind of character could we come up with? I focused in on Scoot McNairy, who’s one of my favorite actors, and his performance in Killing Them Softly. There’s something in his performance where he’s struggling to be this low-level hood in New Orleans that really relates to Guppy. I passed that reference on to Bernard and he really ran with it.

And some of the mannerisms. … One time, I was playing poker and there was this guy sitting at the table, across from me, and he’s almost this kind of lovable loser kind of guy. He’s losing all these hands, he’s just a horrible poker player. He has no poker face, you can see on his face when he has a bad hand. And finally, he gets this good hand, and he’s really smiling and he’s sitting up straight. I kind of want to bring that flavor, so whenever I draw Guppy, I think about that person — hopefully, some of that is going to rub off onto the page itself.

The first issue introduces a new villain, a new career for Dick outside of crimefighting and a new look at where he lives. What are you planning as a follow-up? Where is the book going, long-term?

Humphries: I don’t know, man. I haven’t thought about it. (Laughs.) I’ve writing the last two chapters of the opening arc now, and I’ve found that my understanding of Bludhaven, and of Dick, has changed the more I’ve written them both. It’s intimidating writing a character that’s been around for decades, and there are so many Dick Grayson stories — A, it’s impossible to read them all, and B, it’s intimidating to think, do I have something to say with this character? Is there something new to say with this character? But at this point, I really do feel like I have something new to say with Dick Grayson, and it makes me more and more excited about what’s to come.

Chang: You work on projects, and the work you do, you want to make it stand. With legendary characters like Dick Grayson, you want to be able to be included in that lore, so that years from now, people will look back at it. You want to have a lasting impact. I think that what everyone on the team wants is to make a book that will withstand time. It’s not enough to win a few games here and there, we want to make it to the championship. 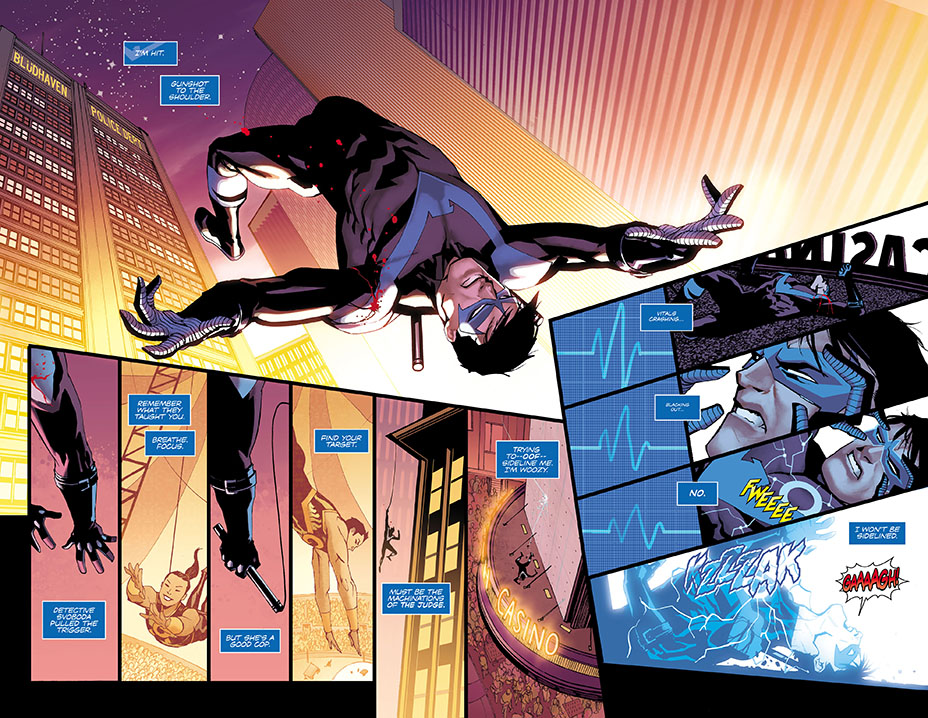 Nightwing No. 35 is available digitally and in comic book stores now.