Continue to The Hollywood Reporter SKIP AD
You will be redirected back to your article in seconds
Skip to main content
August 2, 2017 6:00am

The number of commercial breaks during NFL games has often bothered viewers — and not just those sprinting to the bathroom or kitchen. To wit, NFL commissioner Roger Goodell this year wrote a letter to fans addressing the barrage of ad breaks that follow touchdowns and subsequent kickoffs, commiserating, “I hate that, too.”

Good news: Goodell will deliver on his promise to streamline the at-home viewing experience this season. The solution is to decrease the number of breaks to four per quarter, down from the previous 5-6-5-5 pattern, which often forced networks to squeeze more than a half-dozen breaks into a 15-minute playing period. That meant eight or nine minutes away from game action. Sports media expert Marc Ganis, president of the marketing firm Sportscorp, tells THR: “That’s way too much, especially when the games weren’t compelling. Fans changed the channel or got up and did something else.”

The league and its broadcast partners — CBS, Fox, NBC and ESPN — all insist that the move has nothing to do with the NFL’s 9 percent drop in ratings in 2016. “Everybody assumes the changes were because of the dip in ratings last season, but [plans] had been going on for over a year,” says a league spokesperson. “Our best practice is to see what can be improved in good times and bad.”

The networks say the changes give them more flexibility and breathing room. In the past, a long 10-minute drive may have forced a break or two to spill into the next quarter, creating a logjam that frustrated fans and advertisers alike. Another benefit of less frequent breaks is more space between rival brands’ spots, notes Neil Mulcahy, Fox Sports executive vp ad sales: “The clients are happy with the changes because they’ll provide more separation between competitors.” 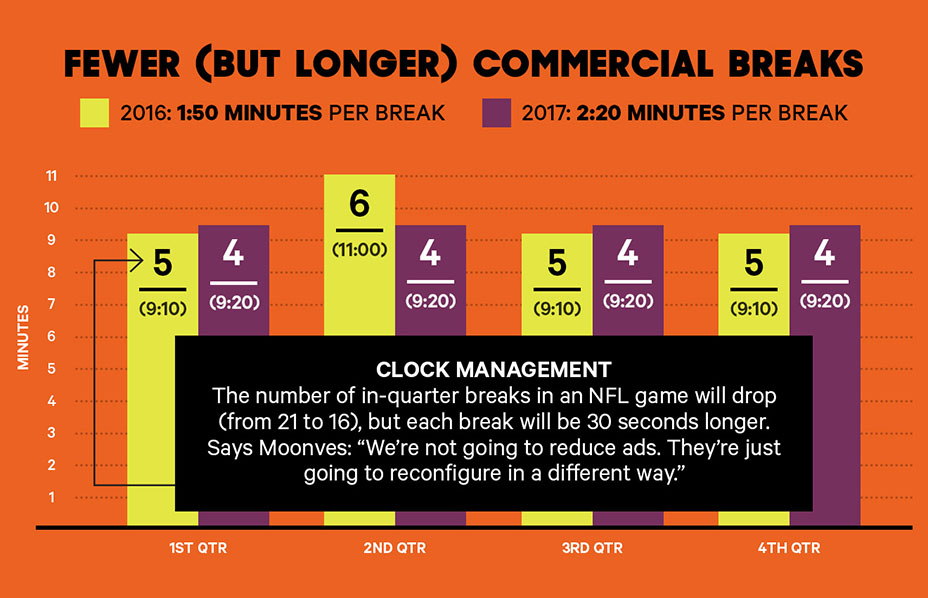 CBS chairman and CEO Leslie Moonves told CNBC in July that the changes weren’t expected to hurt the bottom line. Roughly the same number of ads will be sold; the new breaks will run 2:20 each (up from 1:50).

Ganis agrees, noting that the number of ads will be the same and that ratings will be determined by matchups: “At the moment, I expect zero impact on revenue.”