You’d be hard-pressed to find many Americans lamenting the end of the 2016 presidential election, but few likely welcomed its conclusion more than Roger Goodell. The NFL commissioner has spent the first two months of this season battling an unanticipated narrative for the nation’s most watched sport — cratering ratings. NFL viewership was down about 13 percent compared with the same period last season as of Nov. 4, with primetime showdowns suffering most. Football viewership remains robust, but the softening has caused anxiety and finger-pointing. One possible culprit: the campaign circus of Donald Trump and Hillary Clinton, which many believe diverted viewers to political jousting from the traditional gridiron. Now that theory is being put to the test, with network executives and the league looking to the season’s post-election stretch with hopes for a rebound.

“The number of viewers has remained the same, but the amount of time they’ve spent with the game is where the reduction has occurred,” observes Marc Ganis, president of Chicago sports marketing firm Sportscorp. “That’s an indication that the fans are still interested, but there’s something causing them to move to other programming — or just turn off the game.”

Drops vary. Fox Sports coverage of Sunday games is off only by 4 percent from the first eight weeks of the 2015 season. But ESPN has seen Monday Night Football sink 20 percent, and NBC flagship Sunday Night Football is down a similarly troubling 18 percent — now averaging fewer than 20 million viewers a week. It’s especially scary for ESPN, which pays the NFL $1.9 billion a year for rights.

NFL Ratings Not Causing Him "Too Much Concern," NBCU CEO Says

Speculating about the source of the fatigue is like conducting an autopsy on someone still breathing. An increasing shift to streaming, fantasy participants watching the highlights-heavy Red Zone Channel, backlash over the 49ers‘ Colin Kaepernick refusing to stand for the national anthem and the lack of exciting matchups are among the popular nonelection theories. But there is a compelling case for the campaign as the biggest distraction.

It happened four years ago. In 2012, after Sunday Night Football had ascended to become the first sports series to finish No. 1 for a TV season, NFL ratings dropped 10 percent during the presidential race between Barack Obama and Mitt Romney. Sunday Night Football rallied as soon as the election was over, bettering its season average by 6 percent. The next fall, NFL ratings improved before the record highs of the 2014 and 2015 seasons. “These things are cyclical,” says David Campanelli of Horizon Media. “Last year was the highest ratings the NFL has ever seen. And this year, the games have just sucked.”

Fortunately for the networks and their advertisers, the decline so far is only a perception problem — one shouldered by the league and not helped by the 40 million viewers who tuned in to Fox on Nov. 2 for Game 7 of the World Series, the most watched baseball game in 25 years. Campanelli notes that NFL ratings remain some of the highest on TV. “They’re going to need to use more units to make good on their NFL deals this year,” he says of ad buys at various networks. “But it’s not going to cause any kind of inventory tightening.”

But if the slippage is not related to the election, the NFL has a much deeper problem. “A big issue could be saturation,” says Patrick Rishe, director of Washington University’s sports business program, noting the three days a week of NFL play. “Interest in the sport has climbed steadily over time, so you would think it would eventually reach a peak. Maybe we’ve reached that peak.”

That’s not easily determined. And with few exceptions, such as the New England Patriots and Seattle Seahawks on Nov. 13, the season’s remaining primetime games don’t look phenomenal. “It’s not an individual game that we should look at,” cautions Ganis. “It’s the next four to six weeks. If ratings come back in any meaningful way, people are going to be saying this was because of the election.” 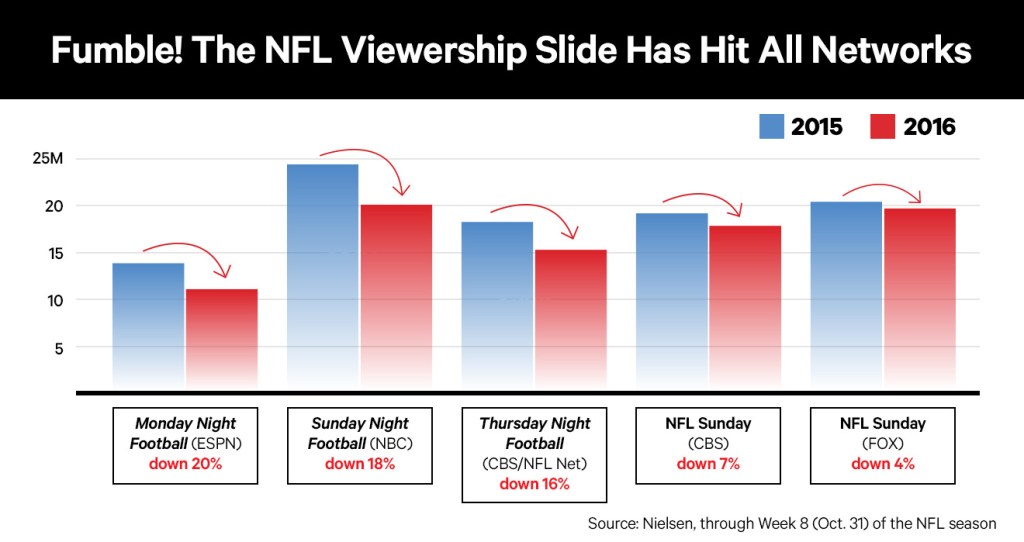