Fresh off their hit four-month run of Oh, Hello on Broadway, Nick Kroll and John Mulaney will host Film Independent’s Spirit Awards on Feb. 25 under a tent at Santa Monica Beach (the ceremony will be televised live at 2 p.m. PT on IFC). Kroll, 38, and Mulaney, 34, joked with THR about emceeing the awards and why their elderly stage alter egos probably won’t appear at the show.

Are you awards show fans?

NICK KROLL John and I grew up watching the Kids’ Choice Awards, and obviously the Spirit Awards are that stepping-stone to get that surfboard.

MULANEY The Rock & Roll Hall of Fame ceremony is the only valuable awards show left because you get to see heavy metal guys wearing small Walgreens reading glasses and struggling with prepared speeches. It’s one of the greatest joys in entertainment.

KROLL Nothing like a small, skinny man with a big head of blow-dried hair and tiny reading glasses.

MULANEY Also, their speeches include grievances, as any awards show speech should. Too many people are grateful at other awards shows, thanking God. I want to hear about an A&R man from 1978 that someone is still mad at.

KROLL Yeah. Making an independent film is not easy. There are a lot of struggles in making a movie on a small budget, and we want people to air those grievances.

How are you preparing to emcee?

MULANEY I’m taking classes at the Landmark Forum to conquer my fear of public speaking. I just heard you laugh, but it’s not a cult. It’s classes that are about self-empowerment. They cost a lot, you’re not allowed to leave, you’ve gotta get other people in there — and it’s great.

KROLL I’m doing a lot of push-ups and getting plugs. I’m going to wear a really tight tuxedo so that people can see my grapefruit arms because I think there’s nothing funnier than a comedian who is taking his looks very seriously.

THR's Guide to the Independent Spirit Awards: What to Know About Saturday's Show

MULANEY Like a wedding toast among a very upset family.

Which recent indie is your favorite?

MULANEY Sully was great. What’s more independent than a guy who lands wherever he wants?

KROLL That symbolism — the flock of geese that went through the engine, that’s the studio system.

Who are you looking forward to meeting at the ceremony?

MULANEY I’m hoping Michael Jordan, the absolute king of slam dunks, will be there.

KROLL We have a million-dollar bet with Michael Jordan about who’s gonna win the award that he’s insisting the new Jurassic Park is gonna win. It’s hard to bet against Michael, but we’re gonna take that bet. So we’re excited to meet him and collect our million dollars.

MULANEY Well, it’s hard to bet against him as a player; as a gambler, you should always take that opposite bet.

KROLL As far as nominees, we don’t know who is nominated and have to look.

MULANEY Is the Micro Machines guy going to be there? Find out. I’d love to meet him.

KROLL That’s true. A lot of these movies were made on micro-budgets, so if the Micro Machines guy is there, that’s a big win. He talks so fast, is the thing. 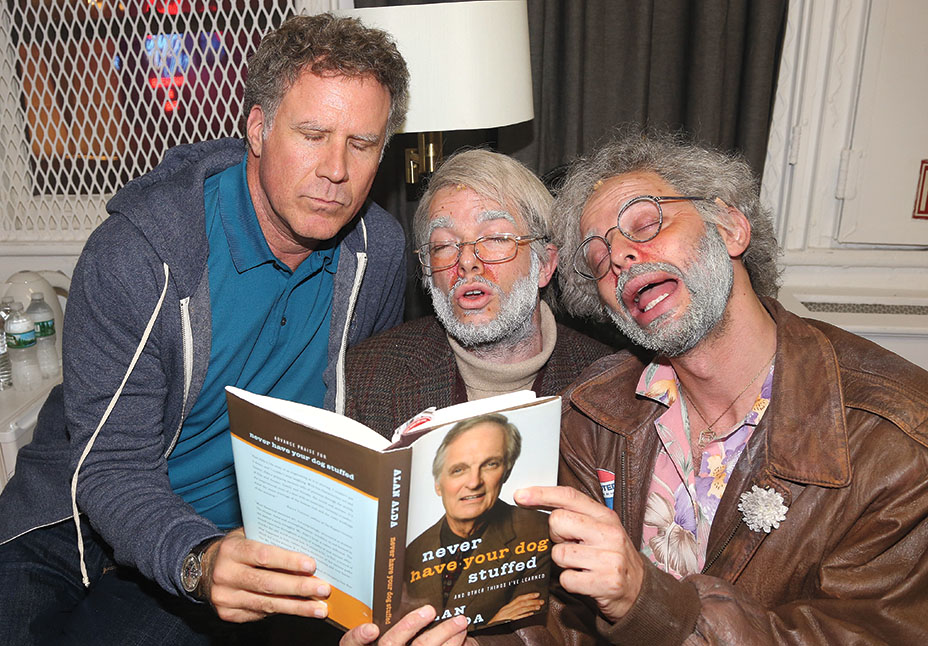 What’s your opinion on political speeches at the Spirit Awards?

KROLL IFC has a huge right-wing following, so the message will be lost and won’t go into an echo chamber.

MULANEY But I always say, words matter more than money or actions.

KROLL The best thing you can do is make a speech that pays lip service to a cause but then don’t actually give money to it.

MULANEY Yeah. The way the Koch brothers give speeches at awards shows instead of just funding the things they want.

KROLL They’re Broadway stars. We offered it, but they insisted on being flown out on JetBlue Mint, wanted a room at the Ramada on Santa Monica Boulevard in WeHo and demanded a per diem of $50 to share. They were reaching.

MULANEY The only beach they’ll go to is Gilgo Beach on Long Island, where many dead bodies have been found.

KROLL They might end up out here, but only for a walking tour of the Manson Family.

A couple performances of Oh, Hello were recorded. Where can we expect to see George and Gil next?

MULANEY If you have a popular streaming service, be on the lookout for it. But George and Gil, by the way, are available to do the White House Correspondents’ Dinner. Nick and John are not; George and Gil are. They’re big [Sean] Spicer heads, so it’s gonna be softball because they love him.

KROLL They like to call themselves the Spicer Rack.

MULANEY They’re gonna have a group of dancers called the Spicer Girls, which are just Vegas showgirls in ill-fitting outfits.