Edson Oda had a comfortable career working in advertising in São Paulo, Brazil. He’d created hit campaigns for the likes of Whirlpool, Honda, Nokia and Johnson & Johnson. He’d won plenty of awards, including the Gold Lion at the Cannes International Creativity Festival in 2009. At 26, he was selected as one of the top 12 creatives under 30 by the CLIO Awards Festival. But after 10 years, he chose to give it all up and move to Los Angeles in 2012 to pursue a career as a filmmaker.

He got his master’s in film at USC. At first, he wrote a bunch of scripts that he never really liked that much. “When you’re in L.A. and you’re trying to make it in the industry, you’re compelled to go after what people want you to do. Nothing was so personal to me,” he says. “Then I felt, ‘OK, if I could just make one movie in my entire life, what would that movie be?’ “

It was then, he says, that the script for his feature debut, Nine Days, poured out. The film centers on a reclusive man named Will (played by Winston Duke) who, over nine days, is tasked with interviewing souls who hope to be given a chance to be born. Will can pick only one soul to give a life to — the rest will cease to exist, and those nine days will be all they’ll ever know.

Surreal and visually stunning, the film’s exploration of both the burden and gift of being alive stems from real loss, Oda says. When the filmmaker, who is of Japanese descent but born and raised in São Paolo, was 12, his uncle died by suicide. It was this tragedy that Oda revisited while writing the script. “I always knew him as someone who was super kind and talented and smart, but now all of a sudden this figure becomes something else, in a way almost a failure to the people who are connected to him. I cannot even imagine how he felt about himself.” 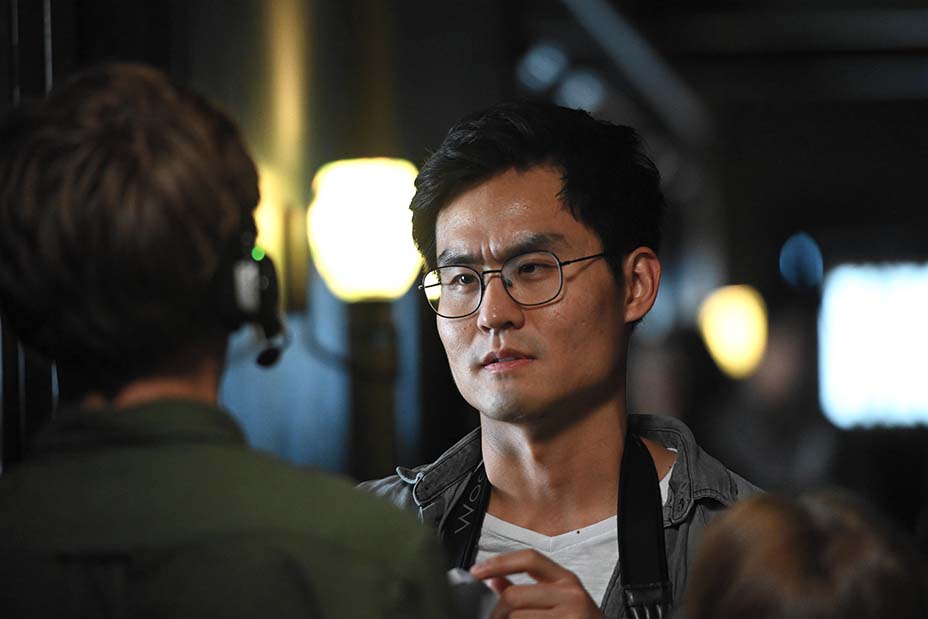 While Oda crafted Will based on his uncle, he needed the right actor for such a demanding role. Will not only is tasked with finding a new soul to birth onto Earth, he also struggles with depression as he tries to keep track of all the souls he has placed in the world. Duke, who had just wrapped shooting on Jordan Peele’s Us, immediately was interested after reading the script (which went through the Sundance Labs in 2017). “It challenges ideas of mental health [and] what depression looks like,” he says. “Right away, I knew this is my story, this is it for me.”

Duke sat down with Oda for a meeting, which turned into a four-hour conversation about everything from filmmaking to their love of Star Wars and Japanese anime to the meaning of life. “It was almost like, I don’t know, love at first sight,” says Oda. “It was just amazing to see that I could trust this guy so much. I had a feeling that he has this big heart for humanity inside him.”

The cast was rounded out with notable names to play several of the souls, including Zazie Beetz, Bill Skarsgård and Tony Hale. But getting the nearly $10 million needed to finance a film by a first-time filmmaker wasn’t easy. Mandalay Pictures’ Jason Michael Berman (Birth of a Nation) teamed with Mette-Marie Kongsved (I Don’t Feel at Home in This World Anymore) and Laura Tunstall to produce the film. “It just had that thing on the page where it feels electric,” says Kongsved. “It’s not just someone wanting to tell a story because it would be fun — there was something underneath the surface that was palpable.”

They first went out to the specialty distributors, from A24 to Searchlight, with no luck. “Executives are so nervous to put themselves on the line for a first-time feature director because it’s such a wild card,” says Berman, who then put together a patchwork of financing that included backing from former Birth of a Nation financier Matthew Lindner and 13 executive producers, including MACRO’s Charles D. King and Kim Roth, Duke and former Sundance director of programming Trevor Groth.

With the backing in place, they were able to build the interior set in a warehouse in Salt Lake City and the exterior at the Bonneville Salt Flats (the location plays a key role late in the film).

For his part, Duke dove into researching mental health. “I did a lot of research on different types of depression and how it manifests,” he says. “Actually, it allowed me a lot more perspective, and, the way I’ve potentially overlooked so many different people around me because they don’t come forward and just say, ‘Hey, I’m depressed,’ or even know that they’re depressed. Looking back, I can see so many people who were going through hardship in their lives and they didn’t even have the language to say anything about it.”

It was a quick, intense 25-day shoot in August, with much of the pressure placed on Duke, whose character drives a lot of dialogue and emotionally draining scenes. “At the end of the day, I love storytelling,” says Duke. “Sometimes I’d want to throw up and pass out, but the next day, I’d be so energized because I knew I was telling a really good story.”

When the film makes its world premiere Jan. 27 at the Eccles Theater (CAA and 30West are selling domestic rights), the producers hope it will be the type of calling-card feature that forces the industry to take notice. “This is the birth of a singular visionary artist,” says Berman. For Oda, who now lives in L.A., the debut of Nine Days will allow him to look at his uncle’s death through the lens of how big a gift life can be.

Says Oda, “Even when you struggle — whatever that struggle is here — sometimes we complain, we take this life for granted, but at the same time, it’s such a unique experience that we have.”