A man in a rented truck drove onto a busy bicycle path near New York’s World Trade Center memorial on Tuesday, killing at least eight people and injuring 12 others in what Mayor Bill de Blasio called “a particularly cowardly act of terror.” The driver was then shot by police after jumping out with what turned out to be two fake guns. The attacker was taken into custody; his condition was not immediately disclosed.

Police said the vehicle, a rented Home Depot truck, entered the bike path on West Street a few blocks from the World Trade Center memorial and struck at least 15 pedestrians, leaving mangled bicycles behind. At least two bodies could be seen lying on the path beneath tarps and the front end of the pickup was smashed in. The attack occurred as the nearby Stuyvesant High School was letting out.

During a press conference two hours after the attack, Mayor de Blasio said, “It’s a very painful day in our city. Let me be clear that based on the information we have on this moment, this was an act of terror and a particularly cowardly act of terror aimed at innocent civilians going about their lives who had no idea was was about to hit them.”

He announced at the time that the death toll had risen from six to eight.

“We have been tested before as a city very near the site of the tragedy and New Yorkers do not give in in the face of these kind of actions,” said the mayor. “We’ll respond as we always do. We’ll be undeterred.”

Gov. Andrew Cuomo said the attack was perpetrated by a lone wolf and that New York will be more vigilant in wake of the attack. Though the threat is over, police presence will be increased during the Halloween holiday. “To New Yorkers, live your life,” said Cuomo. “Don’t let them change or deter us.”

Commissioner James P. O’Neill called the Halloween day attack a “a tragedy of the greatest magnitude.” He thanked the first responders for their swift response, credited them for stopping the “carnage” and saving additional lives.

I’m with Commissioner O’Neill and Governor Cuomo in Lower Manhattan with an update on this afternoon’s incident. https://t.co/7000xigDge

The New York Police Department had been sending out updates on its Twitter feed. The attack closed roads across the western edge of Manhattan along the Hudson River and sent uniformed officers rushing to the neighborhood as people prepared for Halloween festivities, including the annual parade through Greenwich Village. Portions of the West Side Highway would remain close, but police later announced that Sunday’s New York City Marathon would go on as planned.

O’Neill provided updated details, saying that at 3:05 p.m., a vehicle entered the West Street pedestrian bike path at Houston Street in lower Manhattan. The vehicle struck multiple bicyclists and pedestrians along the path. At Chambers Street, the van collided with a school bus, injuring two adults and two children.

After the collision, the 29-year-old male driver, now identified as Uzbek immigrant Sayfullo Saipov, exited with two apparent hand guns and shouted “Allahu akbar,” according to law enforcement officials. He was shot and wounded by police. A paintball gun and pellet gun were recovered at the scene.

Six people, all male, were pronounced dead at the scene between Houston and Chambers Street. Four of those victims were among eight friends celebrating the anniversary of their 1987 graduation from the Polytechnic School of Rosario, Argentina, during a trip to New York and Boston, near where one of their classmates lives.

Two other individuals were transported and pronounced dead at hospital, one among the Argentinan group. Eleven others were transported to hospital with serious but not life-threatening injuries. It was later announced that the tally of those injured was 12.

The NYPD will be thoroughly investigating with U.S. federal agencies.

After the presser, President Donald Trump took to Twitter to say, “In NYC, looks like another attack by a very sick and deranged person. Law enforcement is following this closely. NOT IN THE U.S.A.!” Vice President Mike Pence said those responsible for the attack “must be held accountable.” 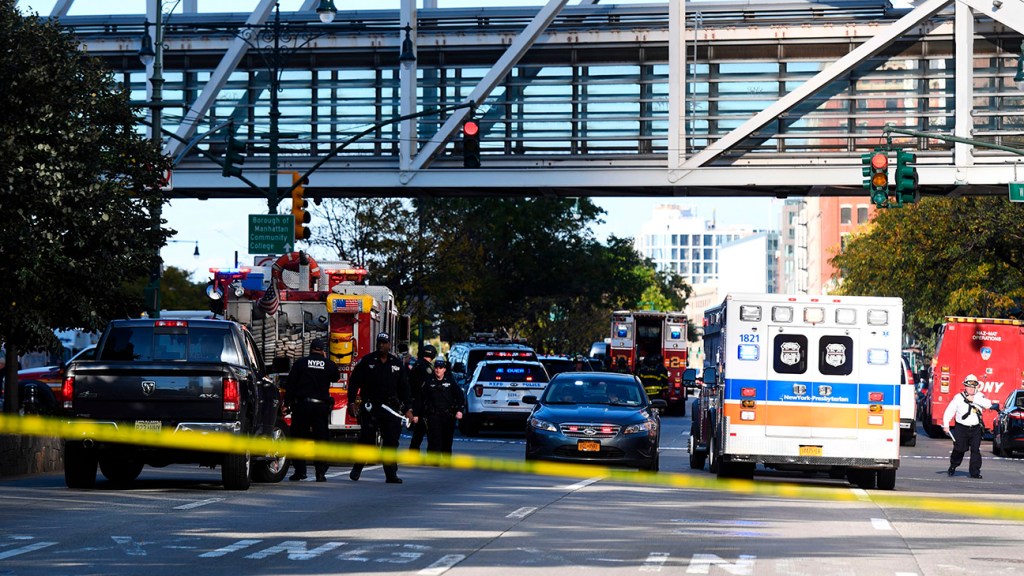 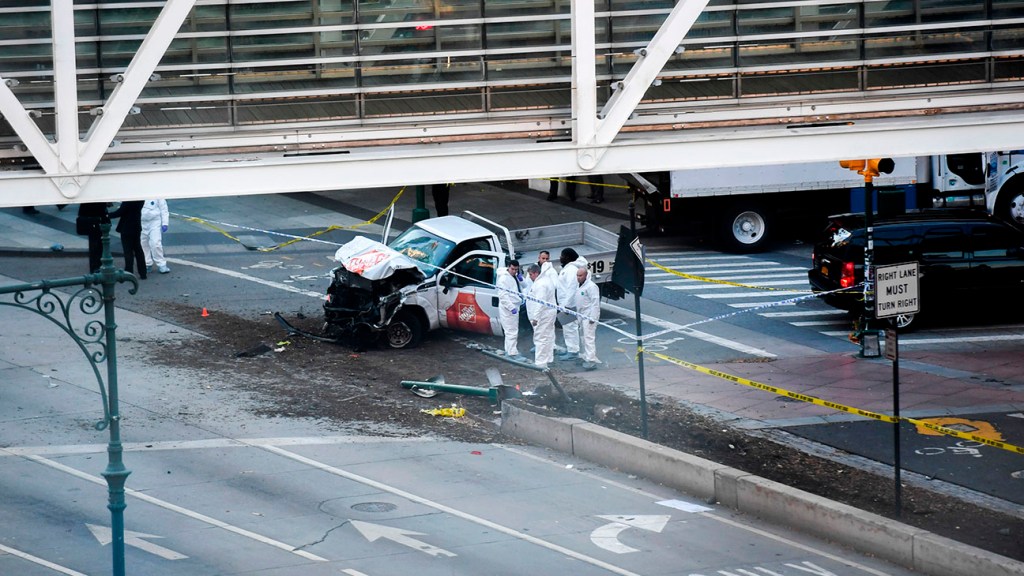 White House spokeswoman Sarah Huckabee Sanders said earlier that Trump, a New York native, had been briefed by White House Chief of Staff John Kelly and “will be continually updated as more details are known.” Sanders added, “Our thoughts and prayers are with all those affected.”

First lady Melania Trump took to Twitter to say, “My heart breaks for #NYC today. Thoughts & prayers as we monitor the situation.”

A man who was riding in an Uber along the West Side Highway near Chambers Street said he saw people bleeding on the ground after the truck struck several. Another witness said the truck had also collided with a small bus and one other vehicle.

Tom Gay, a school photographer, was on Warren Street and heard people saying there was an accident. He went down to West Street and a woman came around the corner shouting, “He has a gun! He has a gun!”

Gay said he stuck his head around the corner and saw a slender man in a blue track suit running southbound on West Street holding a gun. He said there was a heavy-set man pursuing him. Gay said he heard five or six shots and the man in the tracksuit fell to the ground, gun still raised in the air. He said a man came over and kicked the gun out of his hand.

Uber driver Chen Yi said he saw a truck plow into people on a popular bike path adjacent to the West Side Highway. He said he then heard seven to eight shots and then police pointing a gun at a man kneeling on the pavement. “I saw a lot of blood over there. A lot of people on the ground,” Yi said.

His passenger, Dmitry Metlitsky, said he also saw police standing near a man who was on his knees with his hands up, and another man bleeding on the ground nearby. He said the truck had also collided with a small school bus and another vehicle.

Several in the area took to Twitter to say they heard gunshots, including singer Josh Groban, who posted that he “just heard gunshots and ran with my dog.” Once safe, he documented the quick police response in a video. Groban said his dog pulled him into the park a half a block away 10 minutes before he heard the shots.

I’m shaking. That’s the corner I was supposed to have my coffee but my dog pulled me into the park half a block away 10 min before shooting. https://t.co/AvQeRv7Jha

I hope everyone’s ok. Was half a block from me, didn’t see it but heard 8-10 quick rounds fired off. Be safe with your kids out there.

Once I got far enough away I took this video of the quick response from our amazing NYPD and NYFD pic.twitter.com/v0nwJiqmDw

Two law enforcement officials said a note was recovered inside the truck. One official said the note was hand-written in a foreign language, possibly Arabic. The contents are being investigated, but the officials say the document supported the belief that the act was terrorism.

The officials weren’t authorized to speak publicly about an ongoing investigation and spoke to the Associated Press on the condition of anonymity.

Police say the truck’s driver was in critical condition after surgery.