This year’s Creative Arts Emmy Awards take place on Sept. 14, just nine days before the debut of Olivier Rousteing’s spring/summer 2020 collection for Balmain. But he won’t miss that moment at the Microsoft Theater in Los Angeles. “Of course I have to be there — we’re really proud of what we did as a team, and no matter what happens, we’re going to celebrate that,” the designer tells The Hollywood Reporter from his Paris studio.

Rousteing and Beyoncé’s longtime stylists, Marni Senofonte and Timothy White, are nominated for outstanding costumes for variety, non-fiction or reality programming for their work on Homecoming, the 2019 Netflix film that documents Beyoncé’s Coachella concert, which took place over two successive weekends in April 2018. Like many aspects of Homecoming’s production, the costumes were a mammoth undertaking, with Senofonte estimating that roughly 1,000 pieces were created for a 200-member cast that included backup singers, dancers and a marching band. Adding to the project’s scope: two complete sets of costumes were required, so each weekend’s concert would feature its own unique color palette, while Senofonte estimates that up to 60 looks were crafted for Beyoncé.

“The preparation for this particular show was so much more intense than anything we’ve ever done,” says Senofonte, who also worked with Beyoncé on her Lemonade video and Formation tour, both in 2016, and her 2013 Super Bowl halftime show. “We prepped long and hard for so many months in advance of this, because we had one shot for these live shows, so we had to get it right. When you do a tour, you know you have time to tweak and perfect things along the way, but that wasn’t the case here. It was more preparation than anything I’ve ever done for her, but by that day of the first concert, we knew we were ready. We knew we had it.”

Senofonte first met with Beyoncé in November 2017 to discuss the concert’s logistics and staging, as well as the vibe she was seeking to create with the costuming. “We started to think about designers, and typically at that point, I reach out to a bunch of people, explain the vibe and send sketches, but for this I only wanted to work with Olivier,” Senofonte explains. “I knew it was going to be a huge production, and I knew that Balmain had the capabilities we needed for this. Beyoncé has worked with him forever, and I’ve worked with him one-on-one for a lot of things, including the Formation tour. One of the things I love about him is that he takes everything in stride; he’ll listen to all our needs for last-minute changes and never complain about it. And of course he’s one of the best designers in the world, but I knew he would get something out of this production as well.” 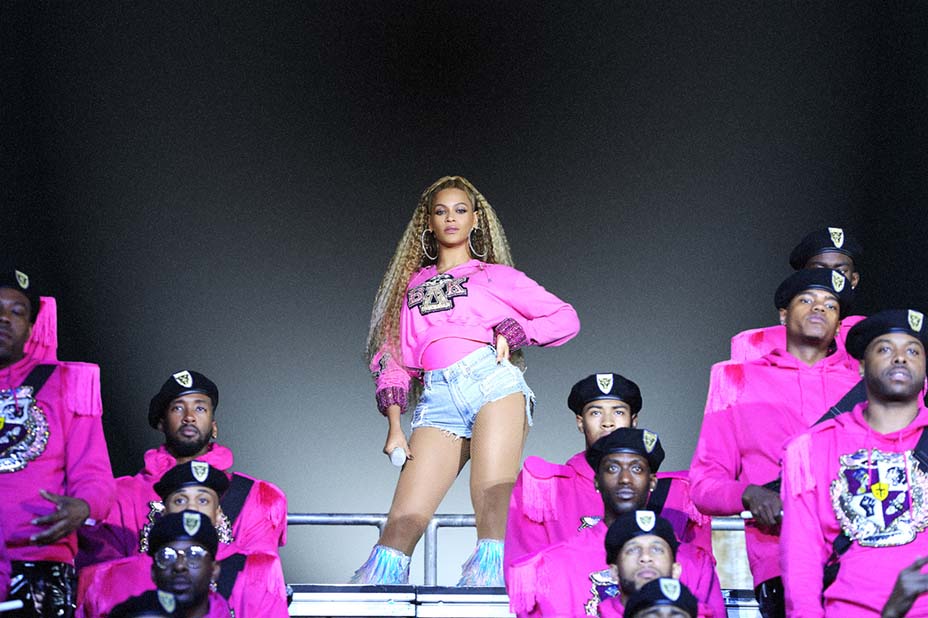 Rousteing says he indeed experienced a learning curve, not only in the challenge of designing and producing costumes that must perform well during the rigorous choreography seen throughout Homecoming, but also in the theme Beyoncé chose to highlight for many costumes, which were inspired by the marching bands and step routines that have become a signature of HBCUs, the 100-plus Historically Black Colleges and Universities throughout the U.S. “This was a part of American culture I didn’t know, so I relied heavily on Marni and Tim for that,” Rousteing says. “I do fashion shows every six months, womenswear and menswear, but in many ways this was the biggest challenge of my life.”

Senofonte and White say that they, too, were unfamiliar with HBCU experiences, so they turned to social media for help. “We immersed ourselves in Instagram; I was following people left and right, and I feel like I watched a million YouTube videos [of band and step performances],” Senofonte says.

At Beyoncé’s invitation, Rousteing traveled from Paris to Los Angeles to watch rehearsals, “and that’s where I think the HBCU aspect kicked in for him,” Senofonte tells THR.

“I love what we created in the end, because it was this wonderful mix of American culture and French couture,” Rousteing adds.

Among Homecoming’s most widely discussed moments is the show’s opening, when Beyoncé enters wearing a crystal-embellished bodysuit and matching cape, accessorized with a dramatic headpiece. “It was true couture, all handmade with stones and crystals,” Rousteing notes. “We wanted to create something truly iconic, something that instantly felt forever and timeless and historic. The pressure was really high, but in the end she was this Egyptian goddess and looked amazing.” 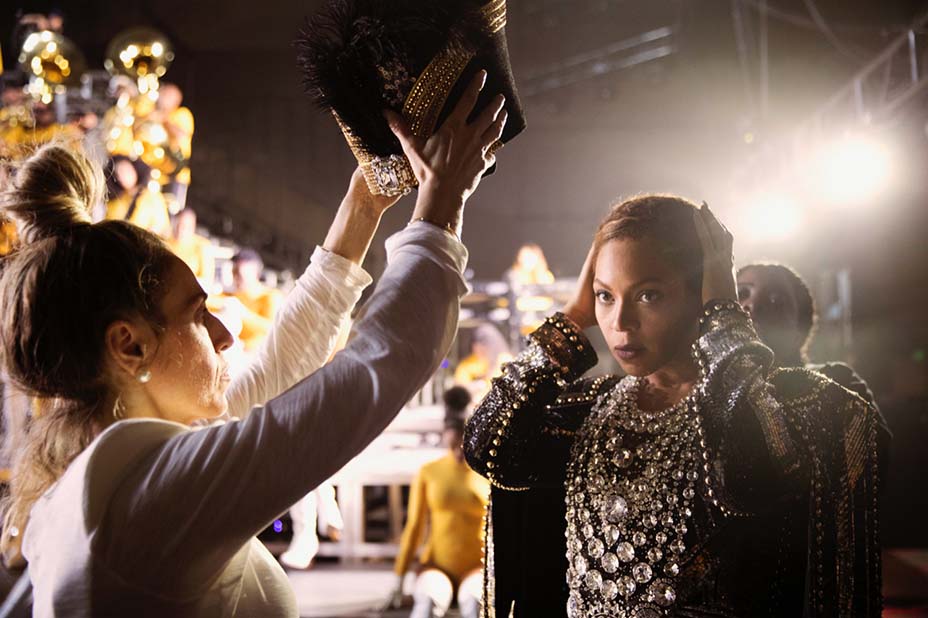 There was just one problem: Dancing was difficult while wearing the cape, but the look was so spectacular, no one — including Beyoncé — wanted to drop it from the show. Thus her entrance was largely composed of walking the runway-like staging, followed by backup dancers, a moment conceptualized solely for the start of the show.

“It was such a powerful, amazing costume — just brilliant — so the opening was built around it,” White says. “And then of course we had to figure out a way to be able to show that and then get her out of it quickly so she could continue with the show.”

“Timothy is a miracle worker — he’s a wardrobe engineer more than anything,” Senofonte says. “What he’s able to do so she can dance in something is pretty unbelievable. We could have tried to make the Egyptian goddess look work for that, but I think it was supposed to be for this grand moment. It’s Beyoncé saying, ‘This is how I’m opening my show. This is a taste of it,’ and that look was all that moment needed.”

The final week leading up to the first show also presented challenges. “There was no cell service at Coachella, which was a bit of a nightmare,” Senofonte says. “Meanwhile, we were trying to receive hand deliveries of beaded pieces coming from India. And I called Olivier in a panic because we needed a clear boot, and somehow in just two days he was able to make it happen and get it into our hands from Italy.” 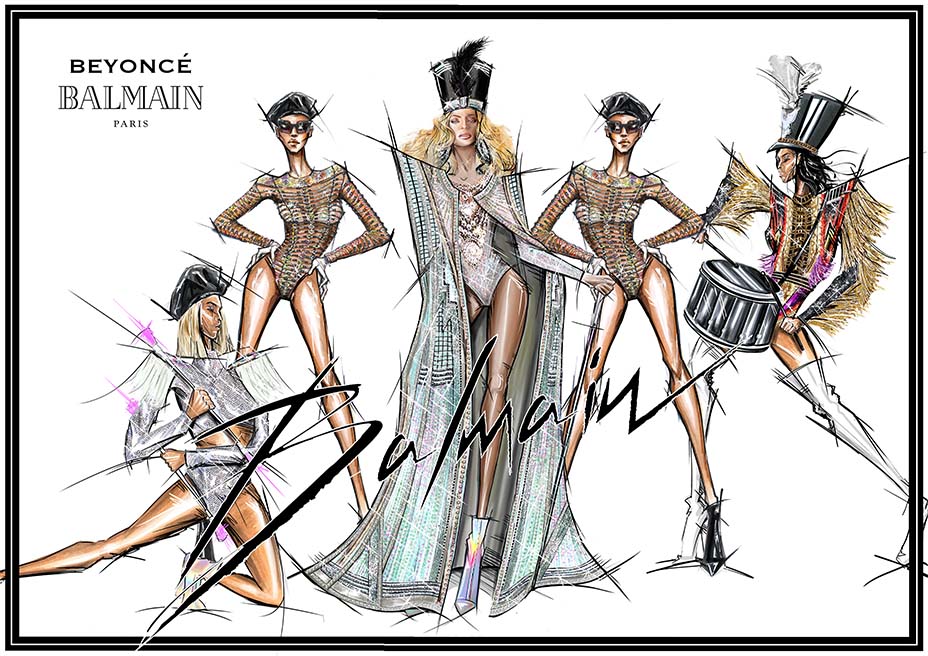 White’s handwork likewise led to another talked-about style moment in Homecoming. The knee-length white boots Beyoncé wears for a large part of the concert were by Christian Louboutin, but it was White that embellished them with a holographic fringe, an effect that swished and shimmered as Beyoncé moved around the stage. “We used the same fabric for a look we created for Solange Knowles,” White notes. “I cut it into a fringe and glued it onto the boots; it only took a few hours, and I created two pairs using two different styles of boots, because we weren’t sure which would look best.”

Rousteing says he was thrilled to be part of the production, though during one moment he couldn’t help transitioning from designer to fan, as he stood next to Beyoncé in the audience watching a dress rehearsal, as a body double wore her costumes onstage. “She wants to see what it looks like from the audience, how the costumes look under the lighting, and while we were watching, she started singing, and it was incredible,” he says. “She really is an inspiration — she wants to share a vision with you, and there are never any limits.”

Senofonte agrees, pointing to Beyoncé’s body-double practice as an example. “That’s not common at all,” she says. “About 90 percent of the magic that people see, they don’t realize it’s coming straight from Beyoncé. I’ve been in the music industry for 20 years, and no one pays attention to the details like she does.” 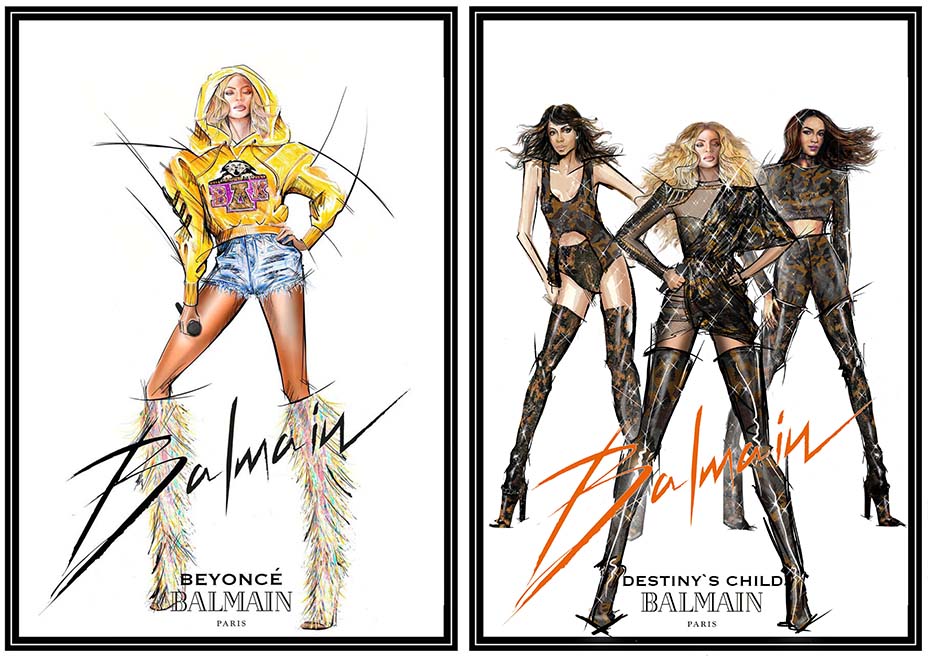 No matter whose names are called in their category on Sept. 14, the trio who created Homecoming’s costumes are united in the belief that the designs and the experience were the ultimate prize. “Being nominated was beyond unexpected for me —here I am, working at this French luxury label, and a project comes along that’s so different from anything else I’ve done in my life. New experiences like that are so important to everything I do,” Rousteing says.

“I had totally forgotten about the nominations the day they were announced, so it was a complete surprise,” Senofonte adds. “In our business, we’re always on to the next project. Tim and I didn’t even see the performance until the movie was released on Netflix; while the concerts were happening, we had our noses in the monitors, trying to see every detail of the costumes. But that’s the job.”