Anyone who grew up in a Latino family knows a matriarch like Rita Moreno’s Lydia on One Day at a Time. In Norman Lear’s Netflix reboot of his 1970s sitcom, about a single mom raising her two kids, the family this time is Cuban-American and the mom — Penelope, an army vet dealing with PTSD, played by Justina Machado — also has to contend with her meddling live-in mother. Moreno’s Lydia is never without her makeup, speaks with a strong Cuban accent (Moreno herself is Puerto Rican) and never keeps an opinion to herself. The octogenarian and EGOT is having fun in the role: In Lydia’s grand entrance on the show’s premiere, Moreno throws open a pair of curtains and is greeted by an ovation from the live audience so loud and long, it had to be trimmed in the final edit. The star spoke with THR between takes of the series’ second season.

What was it like for you making that big entrance as Lydia?

Honestly, I didn’t expect that reaction. I didn’t expect any applause. I was very nervous about that entrance. But the response was pretty fabulous. That scene was so theatrical, which was the purpose of it. Immediately it establishes who this woman is. Lydia is very dramatic and full of herself. I love her vanity. It is so inappropriate.

This cast has great chemistry.

We became a family the day of the first table reading. It was almost creepy. All the Netflix and Sony executives and writers were in the room, and their jaws dropped. It was as though we had known each other all our lives. I wouldn’t say that never happens on a show, but it rarely happens. One possible reason is that we are all Latinos. The first episode was written so authentically that we were automatically a family. But here’s what’s brilliant about the writing: There is a beautiful balance that takes place so that the [non-Latino] audience isn’t left out. The writers room is like the U.N. There are gay writers, Latinos, Asians — everybody is in there.

How did you come up with Lydia’s strong Cuban accent?

The accent just comes from my mom; that’s how she talks. It’s so much fun to use.

She is conservative, and she is radical, in very different ways, which is heaven. It’s like playing two different characters. There is a lot of me in her. I am a very positive and optimistic person. I have enormous reserves of energy, which never ceases to amaze everyone here on set. But there is a big trap in that we have to be careful with Lydia’s character, because she is so big and dramatic. We have to be careful we don’t run into caricature. There’s a very fine line. 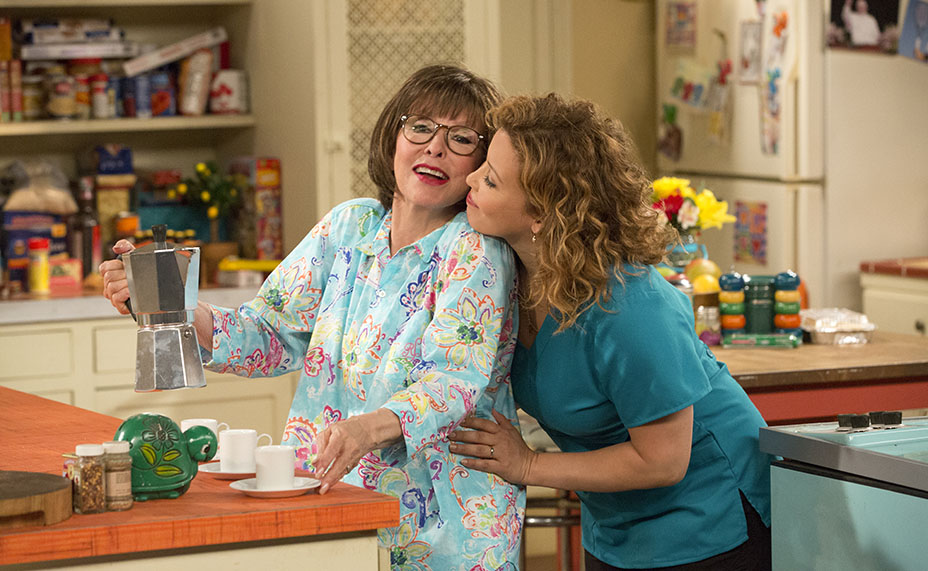 How different is working on this TV series for you than other projects?

For one thing, in film, you work much slower. Here, we do table reads on Tuesdays and after a five-minute break we start blocking the scene. Another thing that is quite different is that we have 10- to 15-page scenes. That is something that Norman really insists upon — that it should be as close to theater as we can get, to have that live-audience experience. We are not chopping up scenes a lot, but they are long. When you are 85 years old, at least for me, you worry a little about remembering all [the lines] and the [blocking] moves. Sometimes the accent is hard to maintain because it makes it hard to say certain things, so I have to sacrifice the accent for clarity’s sake.

Do you modulate your performance for the way the show is shot?

When you are doing a live- audience show, you tend to use more voice, but sometimes a director will have to tell me to bring Lydia down a notch. Having that audience means you might get a laugh when you didn’t expect it. You have to make constant adjustments. It’s just like theater, which is why Norman does it this way and with four cameras. But that first laugh is so important. You are always so nervous about that: “Am I clear? Do they get it?”