For those wondering what it means to work for Disney, a new book — and accompanying Disney+ documentary series — will answer that question, lifting the veil on what one day at the company was like for employees at Disney locations around the world.

Written by journalist Bruce C. Steele, Disney Editions’ One Day at Disney: Meet The People Who Make The Magic Across The Globe looks at the experience of more than 70 Disney employees in multiple divisions of the company, including Disney Parks, ABC television, Marvel Studios and Walt Disney Imagineering, over a 24-hour period. Each employee receives a brief profile explaining their work and their love of Disney.

In Heat Vision’s exclusive preview below, Kristina Dewberry — a construction manager for the Imagineering division who helped construct Star Wars: Galaxy’s Edge — talks about what brought her to Disney, and what it meant to be constructing one of the most talked-about Disney Parks attractions in recent memory.

“It’s pretty amazing to see this flat ground and then all of [a] sudden we’ve got the Cantina,” she explains. “As a huge Star Wars fan, it was just really important to me that this be perfect.” 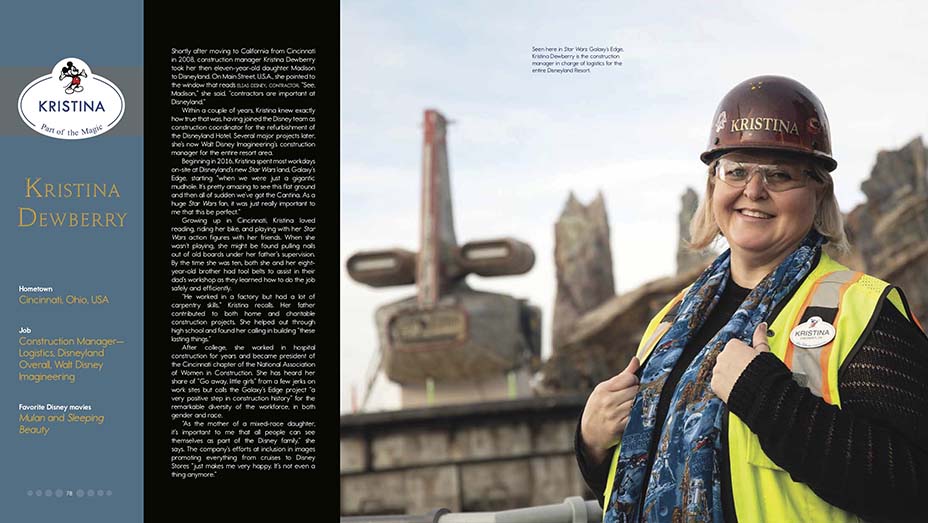 One Day at Disney is more than just a book, however. On Dec. 3 — the same day the $50.00 book arrives in stores – Disney+ will debut its new, 52-episode shortform series One Day at Disney, launching with a feature-length documentary. The non-fiction series takes an in-depth look at the unique and surprising roles these Disney castmembers call their daily jobs.

The series and documentary are from Endeavor Content’s Non-Scripted Division and executive produced by Michael Antinoro and David Chamberlin and produced by Victoria Chamlee.