Nomadland might appear to have Oscar best picture trophy all wrapped up. With Chloé Zhao’s nominations for directing, writing and editing, plus top honors from the Golden Globes, Critics’ Choice Awards, Producers Guild and a host of others, the final Academy Awards category seems like a foregone conclusion. But is it? In the past two decades, Crash and Spotlight, respectively, shocked front-runners Brokeback Mountain and The Revenant. And who can forget how Moonlight emerged over La La Land?

In total, there have been 15 upsets for best picture over the past 72 years, according to a mathematical model I built using historical Oscar data. My model, much like the one I use to predict the Oscars each year, uses various precursor victories during awards season (e.g. the Directors Guild, the BAFTAs) as well as which other categories in which a film is nominated. This model also uses results of other Oscar categories announced during the ceremony, before the best picture is revealed, to capture which of the winners were the biggest surprises the moment the last envelope was opened. (For example, winning best director is a big indicator for best picture, as the categories have agreed in 66 of 92 years.)

Some long-ago winners, like Grand Hotel — the only film to claim best picture on its only nom at the fifth Academy Awards in 1932 — were almost definitely upsets, but my model only has enough data to determine probabilities going back to 1948. Listed in order of how surprising the result was, mathematically speaking, here are the 15 upsets for best picture: 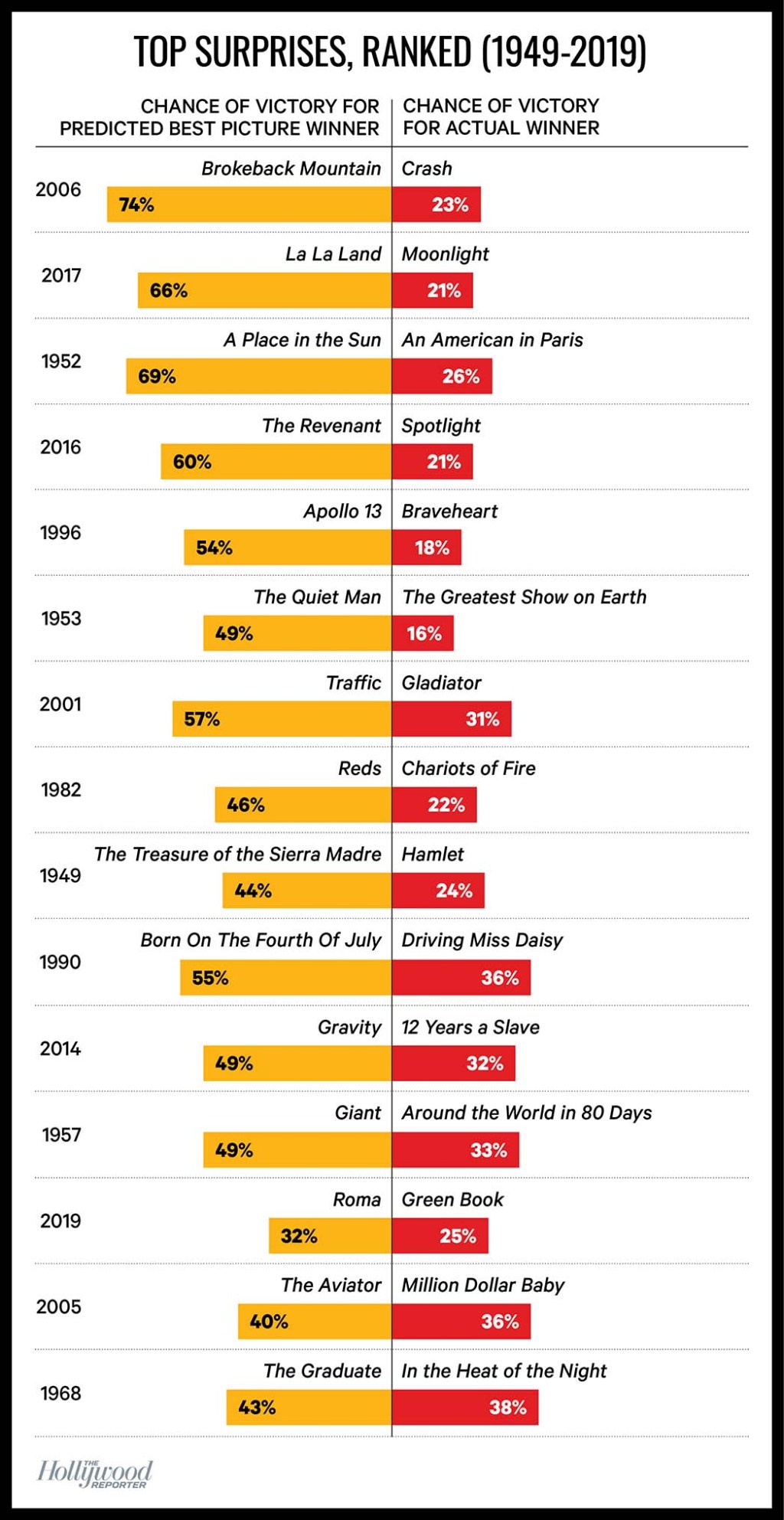 These mathematical upsets — Crash over Brokeback Mountain in 2006, Moonlight over La La Land in 2017, Spotlight over The Revenant a year earlier, Braveheart over Apollo 13 in 1996 — are also in line with what awards pundits and viewers may point to as the biggest upsets. And for those who have been following the Oscars for a long time, same goes for An American in Paris over A Place in the Sun in 1952 and The Greatest Show on Earth over The Quiet Man a year later. In recent years, math predictors would have given slight edges to Gravity, Roma and The Aviator, which respectively fell to 12 Years a Slave, Green Book and Million Dollar Baby.

Green Book and Million Dollar Baby. Still more eyebrow-raising: the years that aren’t considered upsets at all and are not included on the chart. Shakespeare in Love defeating Saving Private Ryan in 1999 is famously remembered as a major upset. But entering the final category, Shakespeare in Love had already amassed six trophies and entered the night with 13 nominations, each the highest tally of any film. It may be an Academy decision that many people disagree with, but that’s not the same thing as an upset — a statistically unlikely outcome. (Incidentally, the same thing goes for How Green Was My Valley over Citizen Kane: It’s now remembered as the greatest upset of all time, but if we had enough data to predict the 1942 Oscars, the model probably would have pointed toward How Green Was My Valley’s triumph.)

But Citizen Kane is ancient history: Fast-forward to today, and upsets seems to be growing more common: 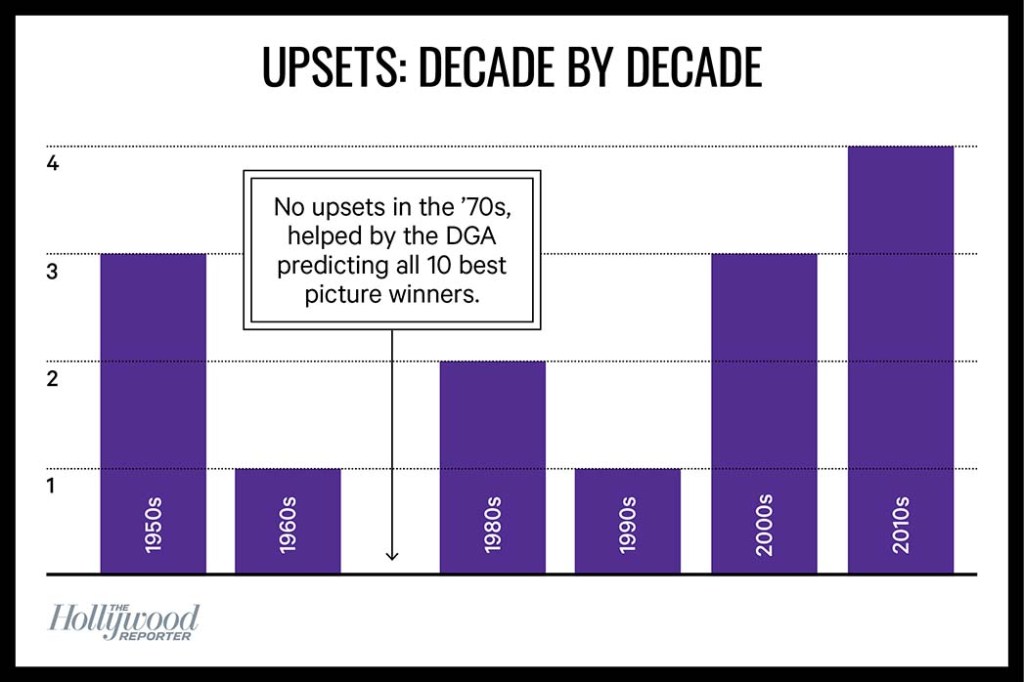 From the 1960s to the 1990s, there were just four upsets for best picture: In the Heat of the Night over The Graduate, Chariots of Fire over Reds, Driving Miss Daisy over Born on the Fourth of July and Braveheart over Apollo 13. In the two decades since, there have been seven. Whether it’s because of the expansion of the best picture category, the 2010 reintroduction of the preferential ballot (a weighted voting system that rewards consensus choices) or some other factor, recent best picture results have become less tied to the traditional predictors.

As such, Nomadland will have cause for concern, no matter how many honors it has racked up. Seven movies have earned above a 50 percent chance to win best picture but still lost; here’s how they stacked up in some of the most important inputs to this mathematical model: 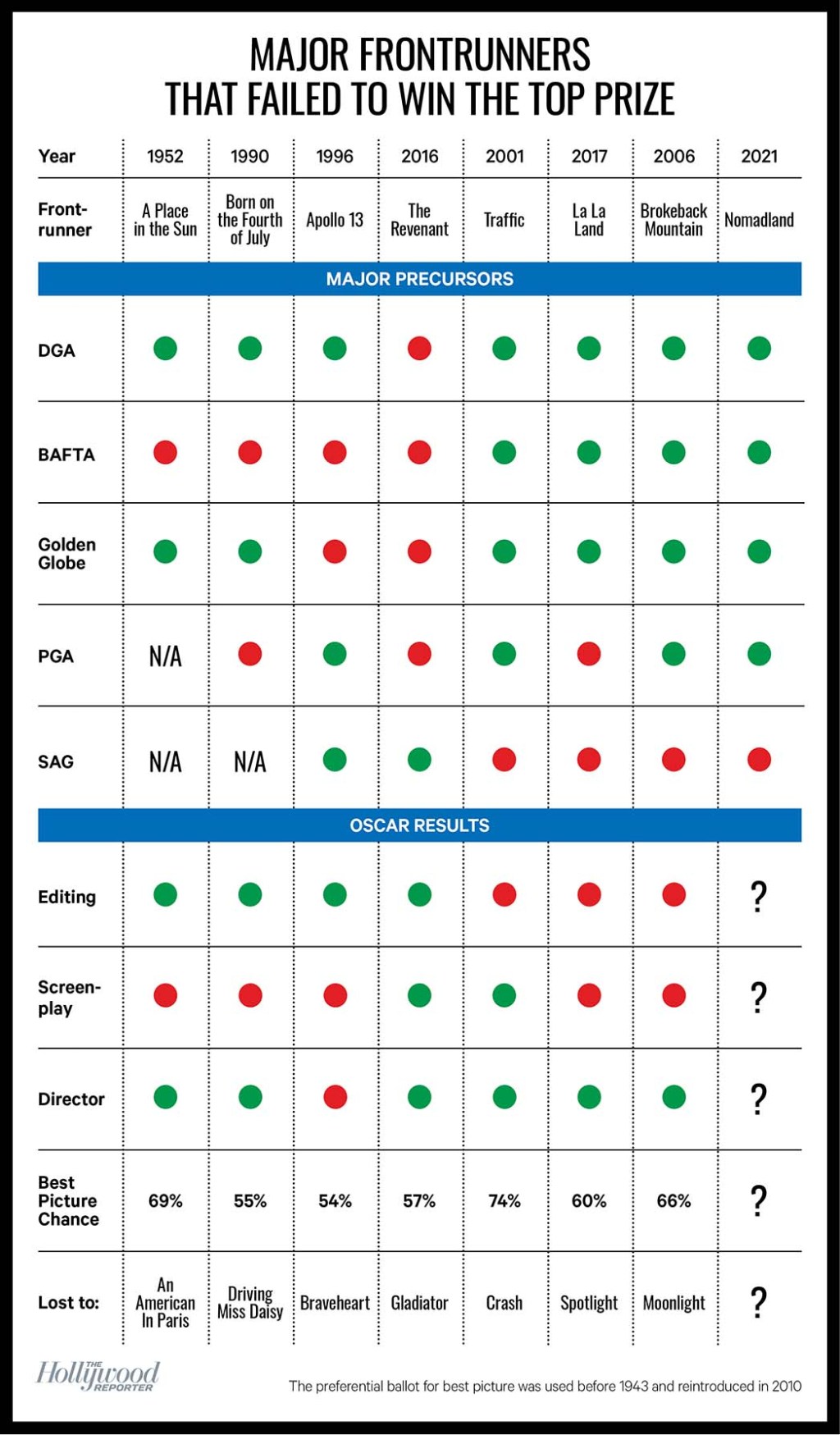 All seven were properly favored by the model, but the red dot losses on every row show some cracks in the armor. Only six movies would display an unblemished row if they appeared on the chart — The Bridge on the River Kwai, The Apartment, The Last Emperor, Schindler’s List, The Lord of the Rings: The Return of the King and Slumdog Millionaire — and all won best picture.

We already know that Nomadland can’t be among that list, without even a nomination for best ensemble from the Screen Actors Guild, let alone a win. Which means that even though we enter this year with a heavy favorite for best picture, absolutely nothing at this point is guaranteed.

Ben Zauzmer is the author of Oscarmetrics: The Math Behind the Biggest Night in Hollywood.

Oscars: Who Will Win, Who Should Win