It was a masterpiece of modesty, the perfect thank-you speech that also hit just the right buttons in the middle of an awards campaign.

When Joaquin Phoenix accepted his best actor trophy at the Jan. 19 Screen Actors Guild Awards, he made three points that helped boost his standing after a rambling, shambling performance two weeks earlier at the Golden Globes. First, he said he was proud to be part of the “community”; then he humbly singled out his fellow nominees; and, finally, the Joker star paid tribute to his acclaimed predecessor, Heath Ledger.

Now Phoenix may just have been nice. But throughout this and other awards seasons, winning speeches at precursor ceremonies have become a weapon in the war to win an Oscar, just as often written by publicists and strategists as by the nominees themselves.

In speaking of “community,” Phoenix linked himself not only to his fellow actors, but to Academy members who might not consider him part of their club. In mentioning his rivals, he paid them proper respect without diminishing his own stature as the winner. And in drawing attention to the late Ledger, who posthumously won the best supporting actor Oscar for playing the Joker in The Dark Knight, he showed he respected history and tradition — both valued by Hollywood. This is all while crucially reminding Oscar voters it was OK to give the bauble to a man playing a comic-book character.

Phoenix wasn’t alone in turning the winner’s podium to his advantage. Brad Pitt has been deft in using self-deprecation and humor to deflate bad press following his 2016 breakup with Angelina Jolie. The supporting actor candidate opened his SAG acceptance with a quip, “I’m going to add this to my Tinder profile” — his self-mocking tone a reminder to potential voters that even he could be single. 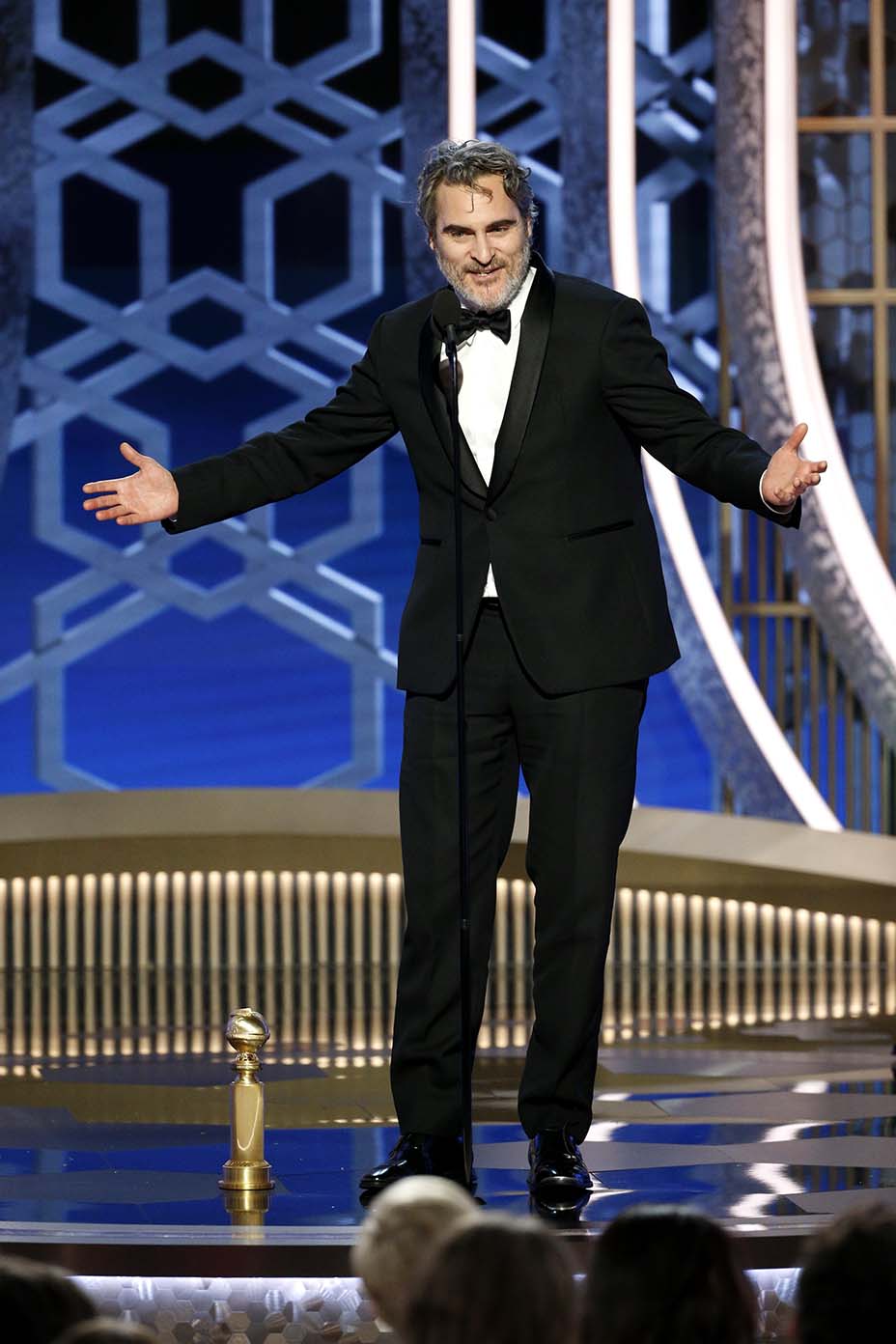 “He’s using humor to poke fun at a situation, knowing that the industry favors him [over Jolie],” says a producer and Academy member. “He’s building on goodwill that’s already there.”

Pitt kept up the humorous tone in his de rigueur acknowledgment of everyone involved with Once Upon a Time in Hollywood, while teasing director Quentin Tarantino about his foot fetish: “Seriously, Quentin has separated more women from their shoes than the TSA.” He also added the phrase du jour: “I love our community so much.”

These speeches have many of the same components and share the same goals. They remind Oscar voters still on the fence that the speakers are modest and likable; they embrace the Oscar “community,” which starts voting on the winners Jan. 30; and they reach for something larger than themselves, as Laura Dern did in accepting her supporting actress Globe for Marriage Story, when she spoke of giving “voice to the voiceless,” something of a stretch given that she was playing a high-priced divorce lawyer.

Renée Zellweger repeated these tropes at the SAG Awards when she won best actress for Judy, thanking her “acting family” (i.e., community); mentioning “the privilege of reflecting on the life of one of our own and most beloved” (that’s the tradition part, with a reference to Judy Garland); and then going bigger than herself with a reference to Tom Cruise — and a reminder of her own acting chops as his co-star in 1996’s Jerry Maguire.

There’s nothing new in this. “My mother is an ordained minister. I’m a Muslim,” said Mahershala Ali when he won supporting actor at the 2017 SAG Awards for Moonlight. “That stuff is minutiae. It’s not that important.”

What’s new this year is that few of these speakers risk rocking the boat, even with an election coming up, and controversial comments have only been delivered by those who are not truly serious contenders in the Oscar acting race. 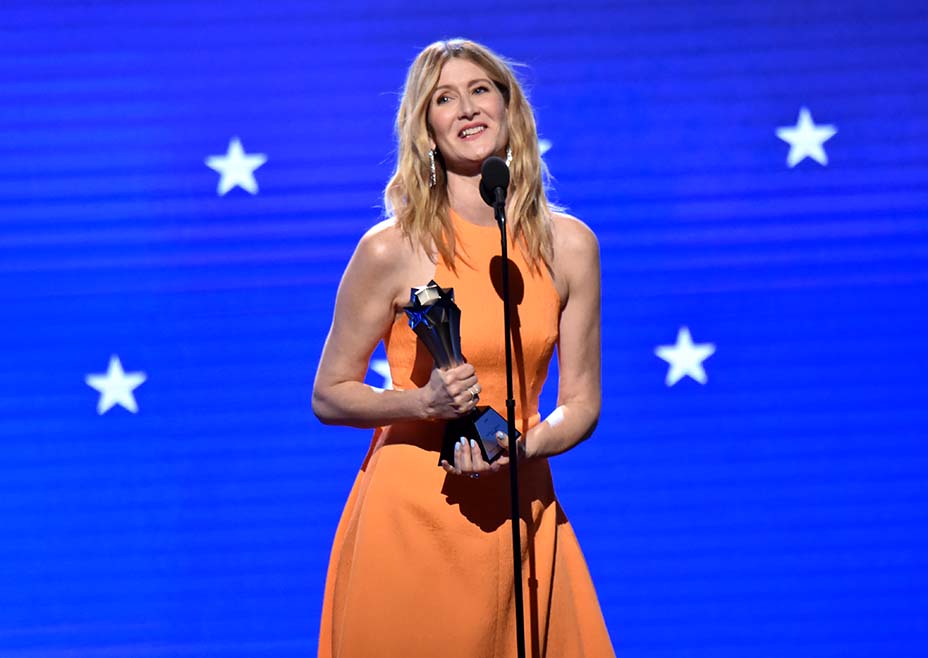 Hence two of the most political speeches were given by Michelle Williams as she won a Globe for Fosse/Verdon, when she defended a woman’s right to choose; and Robert De Niro, who received SAG’s life achievement award (but is not nominated for an Oscar) — he used the SAG stage to slam President Trump.

None of the Oscar contenders has come close to pleading for a social cause, as Frances McDormand did in advocating for inclusion riders when she won best actress at the 2018 Oscars for Three Billboards Outside Ebbing, Missouri, or in her Globes speech, when she spoke about women and the industry’s power structure.

Nor have the current Oscar contenders ventured near the messaging that has become anathema to many Academy members, as evidenced by the likes of Michael Moore, Susan Sarandon and Vanessa Redgrave when she won her 1978 Oscar for Julia and praised the Academy for resisting the threats of “a small bunch of Zionist hoodlums.” That earned her jeers, but she’d already got her win.

Even the stars of Parasite, one of the most political films of the year with its dystopian dissection of class warfare, dodged anything too risqué. When they won SAG’s top prize for best ensemble, actor Song Kang-ho maintained the movie was all about “coexistence and how we can all live together” — a mind-bending interpretation of Bong Joon Ho’s bleak satire.

Controversy may yet raise its head at the Oscars. But the takeaway from the awards so far is this: In one of the most political years ever, it’s safest not to mention politics at all. 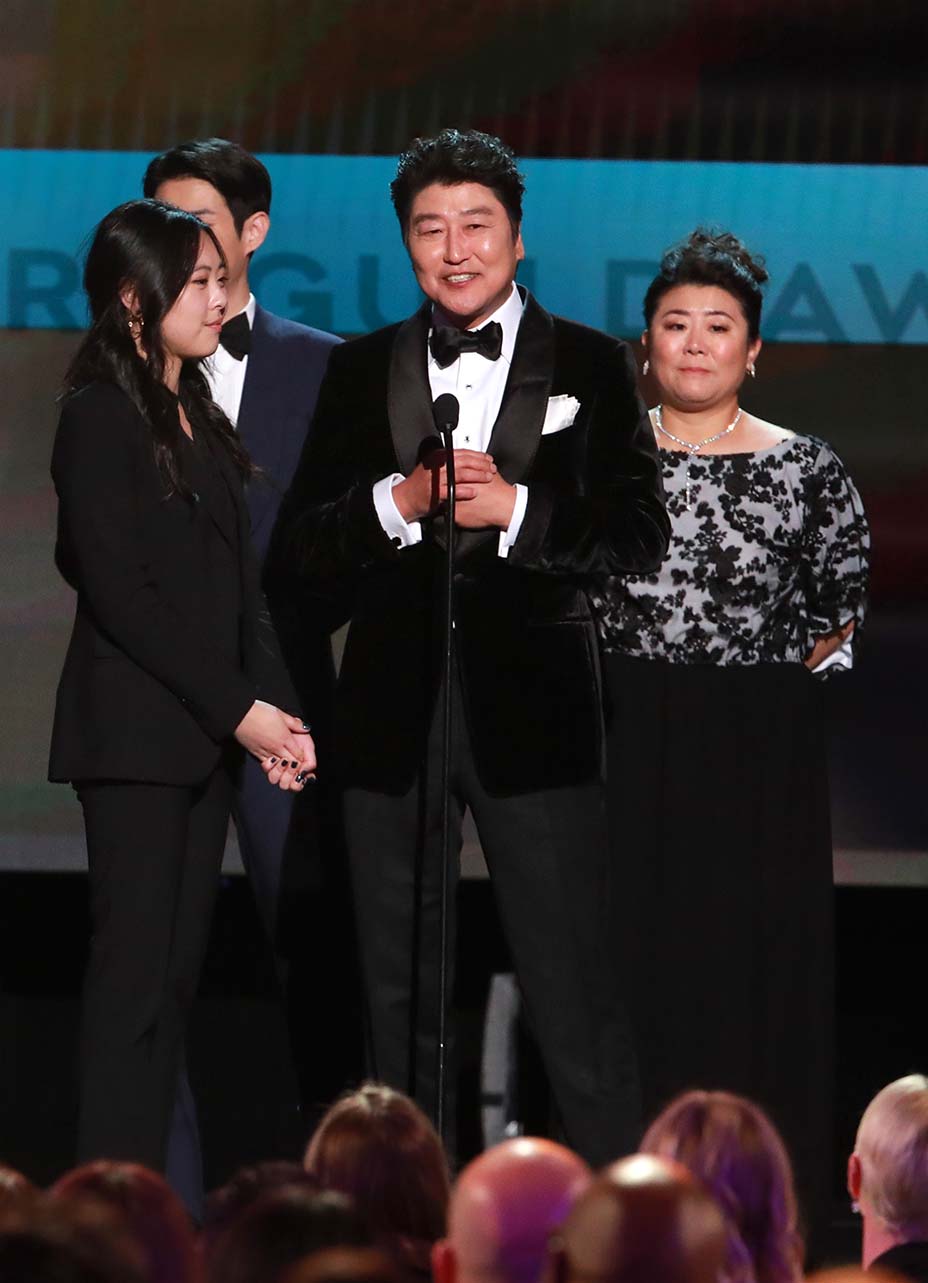