Continue to The Hollywood Reporter SKIP AD
You will be redirected back to your article in seconds
Skip to main content
February 17, 2017 8:30am
Logo text

The screenwriter is nominated for an Oscar for best adapted screenplay for his work on The Weinstein Co.’s Lion, and he’s fresh from London where he picked up top prize in the category at the BAFTAs on Feb. 12. Even with all the good news and that shiny new accessory, Davies hasn’t forgotten the days when he simply was a superfan with stationery and a pen.

Tucked away in a filing cabinet in Luke Davies’ Los Angeles home is a collection of treasured memories from a time in his childhood when he was pen pals with a legend: Belgian comics writer and artist Georges Prosper Remi — better known by his pen name, Hergé — who created The Adventures of Tintin.

Their story starts in 1971 when Australia-bred Davies, then 9 years old, became obsessed with Hergé and Tintin, a series of 24 books about a young Belgian reporter who becomes involved in a series of capers that require his heroic actions to save the day. (The character also was adapted into a 2011 film directed by Steven Spielberg).

“The letters are of such primal importance in my life, so they travel with me wherever I go. They’re here and they’re dear to me,” he tells THR. “It’s such a huge part of my childhood.”

The two corresponded for a handful of years, through Davies’ teenage years, sending letters back and forth with Remi keeping Davies on his Christmas card list for seven years. Retrospectively, Davies says, it’s easy to see that the obsession with Remi and his writing was indicative of his future career as a writer. “This was the first of my absolute obsessions of reading certain books,” he continues. “There are a few seminal moments through childhood when I became obsessed and consumed by certain books and authors and now I understand why.”

He’s also clear on why their correspondence came to an end.

“It faded because of my idiotic doing,” he answers, guestimating that it was around the age of 15 that he “dropped the ball” by not writing back. “That gradual drift away from childhood toward being a teenager and becoming obsessed with girls and sport or whatever. It was me who stopped writing back. I presume that if I had kept writing he would have too.”

As for how he got in touch in the first place, Davies credits his father and his own determination. “My love for the books was so powerful that I felt that I must make contact with the person who wrote them to express my love. The logistics didn’t seem problematic to me. It seemed like an instruction to my father: ‘I must write this letter and I need your help.’ And my dad, God bless his heart, was a smart enough guy — pre-Internet — to figure out how to do that,” he recalls, adding that his father found the address for the publisher (Methuen Publishers in London) and sent the first letter for him from their home in Australia.

And even though it’s been a few years, he hasn’t forgotten what those words meant to him back then. “[Remi] had a way of making you feel like the contact was warm and direct. When I was 9 years old, I presumed that I was the only kid he was writing too.”

For the record, it’s not the only time in his life that Davies reached out to a writer that he admired. During his life, Davies has sent letters to American writer Barry Lopez (Arctic Dreams), Australian poet Peter Porter (The Cost of Seriousness), and American novelist Marilynne Robinson (Gilead). “I did it four times in my life and had three incredibly beautiful experiences from it,” he explains of the fan letters, all of which led to future correspondence or friendships except for Robinson. (“I sent her a letter but I don’t know if she ever received it; she remains a hero,” he explains.) 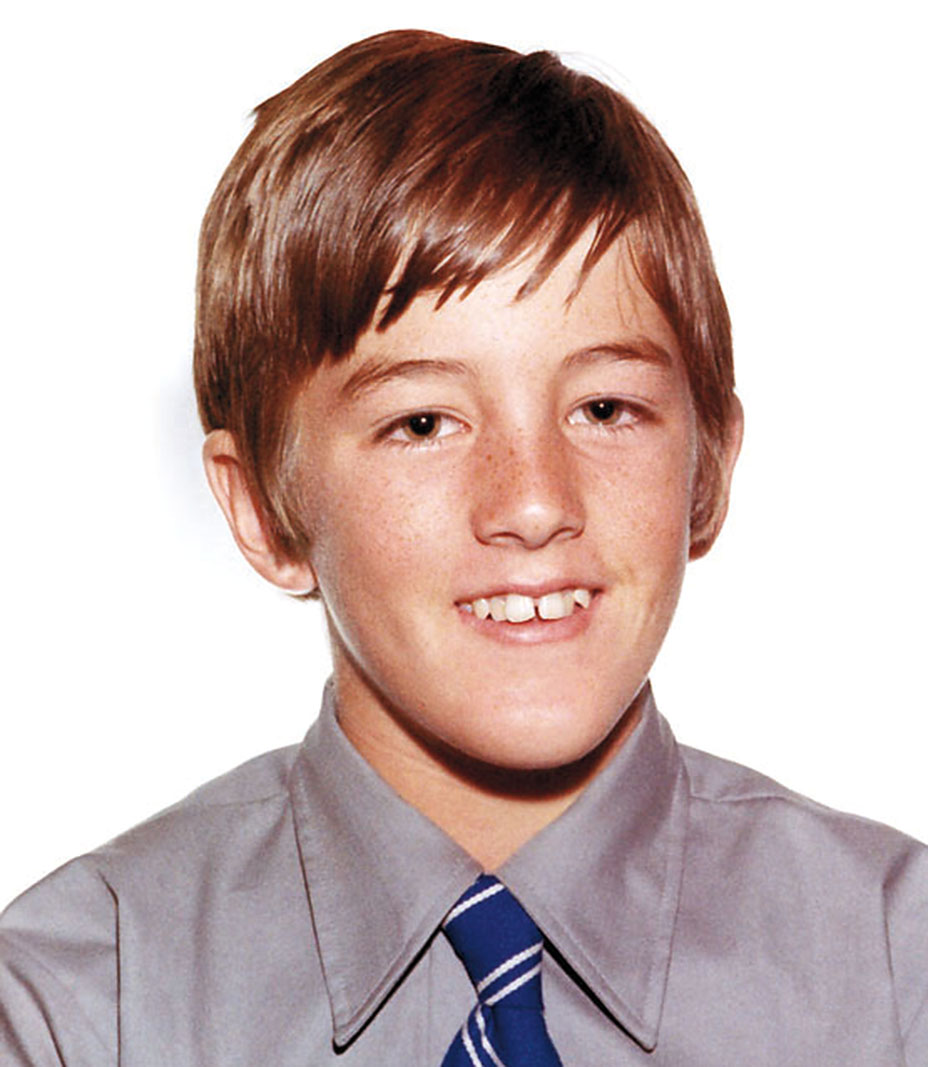 But it’s the Remi letters that remain closest to his heart, which is why he chooses to keep them close at all times. There’s more to this story though than childhood fascination.

As the years went by, Davies developed a rather dark substance abuse problem that exploded into a full-blown heroin addiction when he was in his 20s. He not only lost his way, he lost his grip on the Remi correspondence during that time. “There was a whole collection of precious stuff that I carelessly lost,” he admits, adding that he gave the folder to a friend and rarely thought it about in the following 10 years while in the depths of his addictions.

He recounted the story in an emotional essay published in The Sydney Morning Herald in 2011 and the details are enough to incite chills. In short, the folder changed hands and wound up with a woman he had never met but who just so happened to be sober. He hit rock bottom, surrendered to his addiction and checked himself into rehab. In need of a place to stay for the weekend during his transition from rehab to a sober living facility, a friend suggested another friend of a friend. Though completely random, Davies was so committed to his sobriety that he cold-called this person, who took him in. 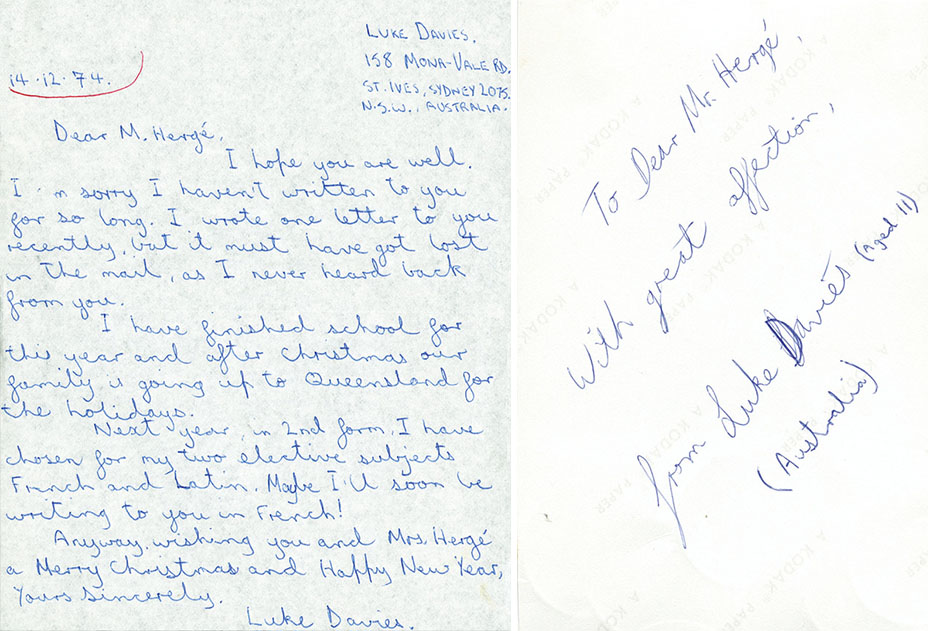 While staying at her house, they got to talking and the woman opened up about how her child was a fan of the Tintin books. So much so, that she’d received a folder of letters that the creator had written to a young boy. Yes, that young boy. “The day when I found the letters again remains, to this day, one of the most important days of completely awestruck, knee-buckling-inducing moments of wonder. I’ve had maybe three, four or five in my whole life,” Davies explains of the seemingly impossible set of circumstances that brought the letters back into his life just 20 days into sobriety. (That was 27 years ago now.) “There’s something almost sacramental to these documents themselves. It was such a sign of affirmation that this is the life I should be living. The universe delivered something to me just at the moment when I had surrendered to the possibility of a new life. It was pure and strong and simple.”

And definitely magical. As for whether he suggests others put pen to paper these days, in an era dominated by instant and often impersonal communication, Davies cautions that potential letter-writers should check their motives. “In my experience, I didn’t want anything other than to express this bursting sense of joy and admiration and gratitude,” says Davies, who recently completed an adaptation of Beautiful Boy to be helmed by Belgian director Felix van Groeningen for Brad Pitt and Dede Gardner’s Plan B that will star Steve Carell opposite Timothee Chalamet. “People are inherently generous. If it’s in your heart, why not do it. You need to be completely in love and obsessed with something in order to find a reason to write. Don’t expect anything back, necessarily.”

And if something does come back, then treasure it, just like he does.