Sam Gold’s tremendously exciting, sensationally well-acted modern-dress production of Othello begins in darkness. Only the intermittent glow of a smartphone or personal flashlight allows murky glimpses of Desdemona as she sneaks into the Moor’s bed. Soon after, we hear but don’t see Iago, seething after being passed over for promotion by the Venetian General, as he ropes the malleable dupe Roderigo into his ruthless revenge plan. Out of that opening darkness comes a take on the classic tragedy that brings scalding lucidity to every odious deceit and manipulation, every gullible misstep, as it inches inexorably toward a chilling awakening, bathed in blood and death and anguished self-recrimination.

'The Phantom of the Opera' Delays Broadway Closure

This latest coup for New York Theatre Workshop, the fertile East Village creative hub that spawned shows from Rent through Once, is a hot ticket to rival Hamilton, pretty much selling out instantly thanks to the marquee pairing of Daniel Craig as Iago and David Oyelowo as Othello. Both actors are fighting fit in roles they seem born to play, the subtlety as well as the terrifying intensity of their work magnified by the startling intimacy of watching them up close in this 220-seat off-Broadway house. The same applies to the raw power of the drama itself, one of the all-time great depictions of thwarted ambition pushed to its ugliest extreme.

Interest among hardcore theater lovers also was fueled by this being the first Shakespeare tackled by director Gold, a Tony winner for Fun Home, justly celebrated for his collaborations with the playwright Annie Baker. Adding further value to an already enticing package, Gold has stacked the ensemble with terrific actors, ensuring that this brutal, bruising interpretation is more than a showcase for its big-name leads.

The director’s concept is to stage the play in a contemporary military outpost, which could be Iraq or Afghanistan. There’s no set as such, but designer Andrew Lieberman has encased the entire theater in plywood, as if we’re all trapped inside an airless coffin, the seating reconfigured into benches on three sides of the playing space. On the floor are two rows of grubby mattresses and pillows, with random personal possessions, trunks and battery-powered lights littered about. One soldier lies sleeping as the audience arrives; two others silently play Rock Band. From the very start, the idea is conveyed of army life as a macho environment with few comforts and nowhere to hide, in which aggressive rivalry is as much a factor as camaraderie. The high-testosterone setting also feeds homoerotic undercurrents that add interesting ripples to the text’s themes of male comradeship, jealousy and betrayal. 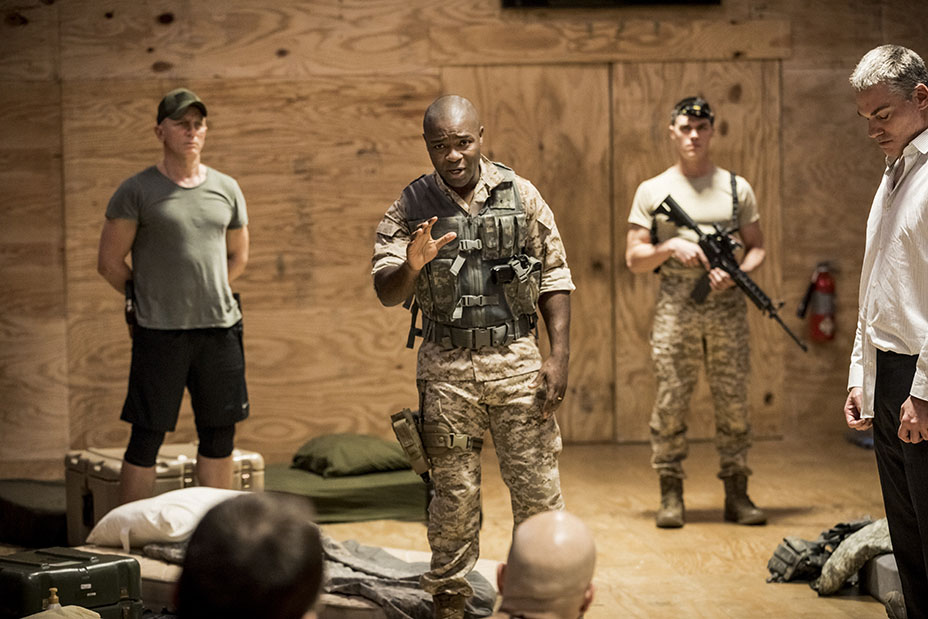 That sleeping soldier is Brabantio (Glenn Fitzgerald), father of Desdemona (Rachel Brosnahan). When Iago and Roderigo wake him abruptly to tell him that his daughter has secretly married Othello, his outrage cuts through the half-light like a knife, infusing the air with a tension that Gold deftly manipulates throughout. Othello is a respected general, but his being a Moor makes him an undesirable son-in-law for the arrogant senator. Brabantio immediately confronts Othello, and though Oyelowo, like the rest of the impressively toned cast, cuts a buff figure, there’s sweetness and lightness in his manner, a kind of transported rapture, as he explains how he and Desdemona fell in love. When his bride speaks for herself, by contrast, it’s with forcefulness and authority, while Othello stands by smiling almost coyly.

The strength that Brosnahan (House of Cards) displays from her first scenes is characteristic of the understated yet effective feminist spin on the play’s distaff roles. This Desdemona is a woman of intelligence and principles, and when poor Othello gets brainwashed by Iago into believing she’s been unfaithful, she never suspects that plot because the very idea of infidelity is incomprehensible to her.

A stiff backbone also defines the production’s tough Emilia, Iago’s wife and Desdemona’s loyal lady-in-waiting, played by Marsha Stephanie Blake with an indignant fire in her belly. Just the way she spits out the word “men” once her husband’s scheming has come to light makes her resentment of gender inequality crystal-clear. Casting an African-American actress as Iago’s wife also makes this production less about race, beyond Brabantio’s hostility toward his daughter’s marriage, although Othello’s insecurity about his foreignness within the military hierarchy no doubt contributes to him being so easily tricked.

The Duke, played by David Wilson Barnes as a coolly detached technocrat glued to his laptop, dispatches Othello to defend Cyprus, and when Desdemona insists on accompanying him, the Moor appoints “Honest Iago” to keep her safe. Once they relocate to a conflict zone, the power plays and chicanery get ratcheted up several notches.

Oyelowo, a Royal Shakespeare Company veteran, employs beautiful classical delivery with the slightest African accent, in contrast to Craig’s Iago, who speaks in similarly subdued working-class cadences. This is especially effective in his familiarity when addressing the audience, often moving into the aisles to draw us in, making us more complicit in Iago’s nefarious scheme. His dual purpose is to poison Othello’s marriage and also strike out at Cassio (Finn Wittrock), the strapping soldier promoted over him to lieutenant. Costumer David Zinn outfits Craig, like most of the cast, in a mix of military gear and athletic wear, facilitating performances notable for their brawny physicality. But Iago’s swagger doesn’t disguise his wounded vanity at being passed over for the fresh-faced young Cassio, played by Wittrock with an intrinsic goodness that never undercuts his strength. 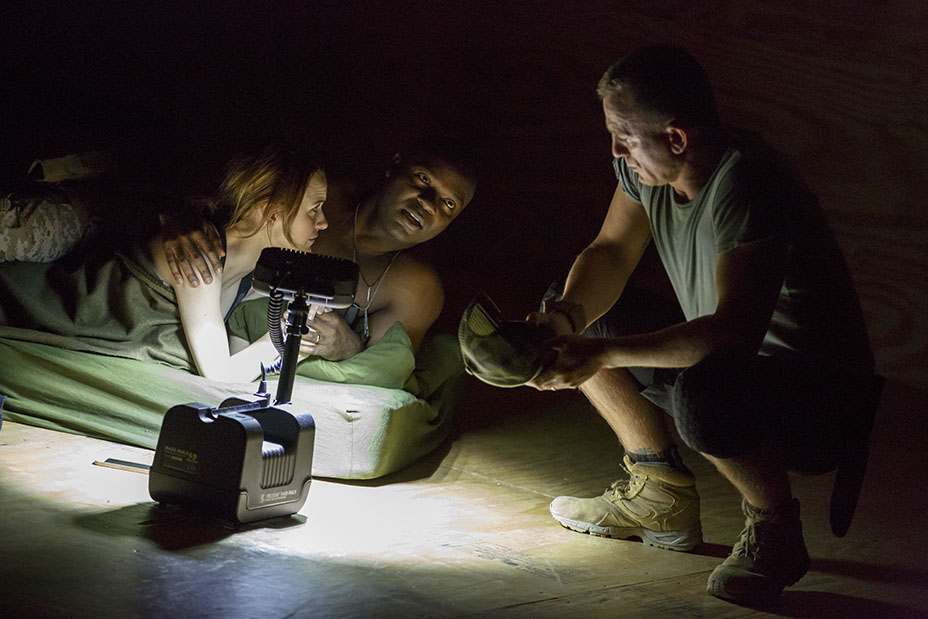 Part of the seductive quality of Craig’s sizzling performance is the ability of his Iago to lie with absolute conviction, maintaining the façade of loyal devotion to Othello even while simultaneously acknowledging to us in the audience that his actions are driven by pure hatred. Coming off one of the nastiest presidential election campaigns in American history, the shameless embrace of opportunistic denial, self-contradiction and fake news acquires caustic resonance. There’s also a rich streak of blackest humor running through many of Craig’s line readings, suggesting not only his amorality but also the cruel pleasure he derives from it. Emilia’s words, “Villainy, villainy, villainy!,” have seldom sounded truer.

By contrast, the nobility of Oyelowo’s Othello makes Iago’s duplicity cut even deeper. Like Cassio, Othello is over-trusting but never stupid, and as Iago turns the screws in his plot to incriminate Desdemona and Cassio in an invented infidelity, Oyelowo’s spiral into borderline-insanity is heartrending. With Iago fanning the General’s suspicions from a flicker into a raging bonfire, Othello of course commits the ultimate act of madness. Oyelowo conveys the man’s wracked mental and physical state with searing heat, shattered by remorse even before he receives the devastating confirmation of his wife’s innocence and Iago’s guilt. That prompts a roar of grief so awful you almost have to look away. It’s a stunning performance, made all the more potent by the very palpable sexual connection here between Othello and Desdemona.

The brilliant match of this production’s Othello and Iago is fortified by the entire ensemble’s muscular performance style and vigorous grasp of the language. It’s easy to forget you’re watching Shakespeare when the words flow with such conversational ease and such clarity of meaning. Among the standouts is Matthew Maher, whose sniveling Roderigo is buffoonish and funny but also strangely touching in his readiness to do Iago’s bidding, even when he appears to know it will end badly for him.

Running a little over three hours with a single intermission, the production is unhurried though feels increasingly propulsive as the play draws toward its horrific conclusion, when the body count stacks up in the ghostly haze of infrared helmet beams. Throughout, lighting designer Jane Cox shifts between the secrecy of half-light and the unforgiving glare of overhead fluorescents, starkly exposing the play’s vile deeds. And Gold adds to the lacerating sorrow of the drama by having one of the soldiers (Blake DeLong) play gentle acoustic guitar in counterpoint to some of the most violent scenes. This visceral production is not to be missed, but good luck getting a ticket.