At the outset, Our Very Own Carlin McCullough looks like it might be taking on the twisted authority figures who have dominated the news this last year with abuse scandals in USA Gymnastics, USA Swimming, the Canadian women’s ski team and other amateur sports. But this new play, written by actress Amanda Peet, is actually something much more — a deep dive into the desperate parents, extreme training costs, gruesome politics and wrecked childhoods that are pretty much standard-issue in these worlds. All that, of course, makes these kids easy prey when there’s a monster in the locker room. But let’s not get ahead of ourselves just yet.

With her second professionally produced play (following The Commons of Pensacola, which debuted off-Broadway in 2013), opening on the Geffen’s smaller Skirball stage, Peet gets the high-performance details exactly right, pitting a tennis prodigy, her tightly wound mom and a doting coach in a trilateral battle of good intentions gone awry.

Immediately we’re drawn in by Coach Jay (an astutely cast Joe Tippett of NBC’s Rise), a scruffy outlier with all the skills to make champions. But because he has allowed his coaching credentials to lapse, he is prevented from teaching at the better clubs and makes ends meet tending bar. Jay doesn’t conform to the sport’s supposed current-day norms in other ways as well: Both on and off the court he’s old-school, hands-on (literally), shirt off — and oddly close with young Carlin, moments that are both sweet and creepy as we learn more about these characters.

Carlin’s mom Cyn (Mamie Gummer in her Los Angeles stage debut) is a single parent — blissfully naive at first, as most sports and show-biz mothers are to the rabbit hole that’s about to swallow them. At first she’s merely treading water to pay the mounting bills for all this athletic training, while nursing a giddy crush of her own on Jay.

The play’s first moments in which Cyn is girlish and flustered in Jay’s presence are about the only time your mind wanders to Gummer’s own real-life mom, Meryl Streep. Both women have a signature manner in this kind of scene that is strikingly similar, and it’s endearing. From there on Gummer clears her own path, as she has done in many roles on stage and screen over the last dozen years, notably as Nancy Crozier on The Good Wife. When the heartache of unfulfilled potential, bad decisions and busted dreams collide in the second-act reveal, Cyn’s anguish ties it all together in unexpected ways.

Set in cheap hotel rooms, the family kitchen and out back behind the tennis courts, the play is well staged by director Tyne Rafaeli, never feeling at all hemmed in by the limitations of mounting a tennis story in a tiny theater. Incidental music and sound design by Lindsay Jones are also a plus.

The two young actors who play Carlin — first as a pre-teen (Abigail Dylan Harrison) and later at high school age (Caroline Heffernan) — are both superb, displaying just the right sense of smarts and indifference. And terrific Tyee Tilghman as Salif, an elite coach with troubles of his own, rounds out this taut, four-character study.

While athletes and their quests have been fodder for film for decades, such material comes to the stage less frequently. (The show was commissioned by the Geffen’s New Play Development series.) Will those who never plied high-level athletic turf find this material too inside-baseball, or even care? It’s tough to tell, but few artistic works about sports have nailed the nuances as accurately.

From top sponsors abusing marquee athletes, to parents drained of everything including their ability to reason, to great coaches locked out of prime opportunities and kids with full-time careers washed up at 16, it’s all there. And it is within this world that budding playwright Peet has crafted what is really a very broad metaphor. Adolescent talent is the most fragile and fleeting of all. One bad decision and it’s gone — never to be recovered, as the body (and mind) will never again be that malleable. 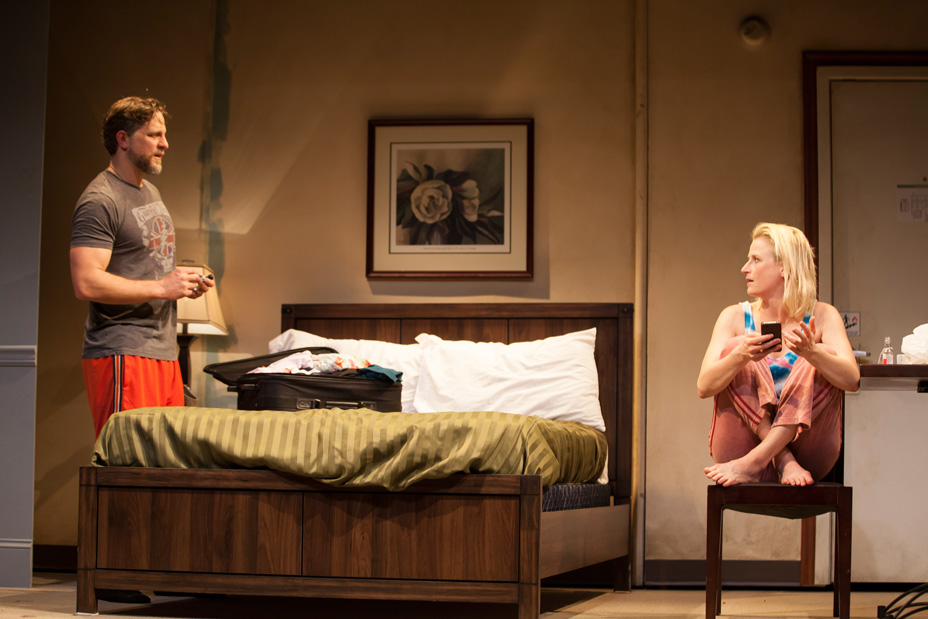