Given that Pacific Overtures, by composer-lyricist Stephen Sondheim and librettist John Weidman, deals with consequential treaties, there’s a crisp elegance in the choice of director-designer John Doyle to stage the complex action on an austere white runway that resembles an ancient scroll awaiting signatures. Premiered on Broadway in 1976, this uncommonly ambitious historical musical about the Westernization of Japan will forever be measured against the opulent standards of Harold Prince’s elaborate, Kabuki-influenced original production, despite it being coolly received at the time. But this streamlined adaptation, performed with soulful feeling by a small multi-role cast, and told with haunting narrative simplicity, rewards being savored on its own subtle terms.

Conceived by Weidman as a play, the project became a musical when Prince brought an initially reluctant Sondheim on board. Despite the show having always been a somewhat esoteric prospect for mainstream audiences, its episodic construction, the complex mini-narratives of its songs with their haiku-like lyrics, and the exquisite melodies with their Japanese-style instrumentation now make it difficult to imagine the piece in any other form.

The story covers the 1853 expedition of the American naval officer Commodore Matthew C. Perry to “encourage” Japan to end its rigorously maintained 250 years of cultural isolation and open up to international trade. In Weidman’s version, that first foray is blocked by resourceful young samurai Kayama (Steven Eng), whose swift promotion to deal with the crisis turns out to be a mixed blessing. With the aid of Manjiro (Orville Mendoza), a fisherman who was rescued at sea and taken to Massachusetts, bringing knowledge of America to the table, Kayama sets up a ruse by which the interlopers depart with only the illusion of having set foot on Japanese soil. But the Americans return a year later, pushing the case for trade more insistently with 10 warships, and winning over the malleable new shogun, Lord Abe (Thom Sesma). That opens the floodgates for other nations to follow. The musical then speeds forward in the final number, “Next,” to a modernized contemporary Japan, its traditions increasingly diluted.

The heavy footprint of American foreign policy, international trade bullying, globalization and the distrust of an isolationist culture toward outsiders all make for fascinating dramatic fodder with ongoing relevance. But what most distinguishes Pacific Overtures — a title with an ironic double-edge — is that it’s presented entirely from a Japanese point of view. The story is told by a narrator called The Reciter, who comments on the action, a role reduced in this version but invested with statesmanlike dignity by George Takei. And in a lovely device that provides a bridge between past and present, Doyle’s modern-dress production introduces the figure of a young Japanese woman (Megan Masako Haley), who looks on silently, alternately charmed and distressed, as this history is recounted. 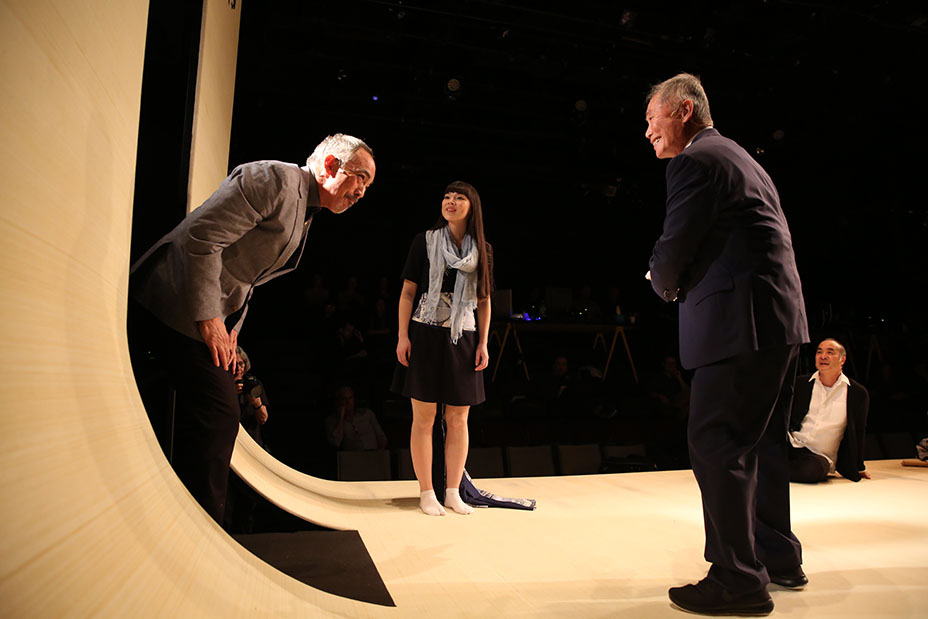 The frugal restraint of the production — using minimal props and lengths of wave-print fabric to represent everything from water to tatami matting to ceremonial robes — highlights the delicacy of one of Sondheim’s most evocative scores. Dominated by woodwinds, strings and unsettling bursts of percussion, Jonathan Tunick’s orchestrations for nine musicians are perfect for the intimate setting (the audience is seated on either side of the long stage), giving crystalline clarity to every lyric.

The presentational style that Doyle favors is ideal for this material, starting with the opening song, “The Advantages of Floating in the Middle of the Sea,” which depicts the rituals of “a land of changeless order” — the arrangement of screens and flowers, the planting of rice, the trading of bows and gifts. That serenity is punctured once Kayama is promoted to police prefect, charged to drive away the encroaching American “barbarians,” a task his wife Tamate (also played by Masako Haley) is certain can result only in failure and disgrace. Their melancholy song, “There Is No Other Way,” is the first of many quietly moving interludes, planting an early warning that Tamate is contemplating seppuku.

Bolstered by Weidman’s expertly condensed book, Sondheim’s storytelling powers are at their peak here, describing the momentous first sightings of the American intruders (“Four Black Dragons”); the gentle beginnings of friendship between Kayama and Manjiro (“Poems”); or the efforts of a Madam (the always delightful Ann Harada, the only other woman in the cast) to prepare the ignorant farm girls from her brothel (played with amusing awkwardness by men wielding fans) to entertain the foreigners (“Welcome to Kanagawa”).

Doyle has made significant changes — excising or moving dialogue, reallocating songs, removing Commodore Perry’s menacing “Lion Dance.” Perhaps most controversially, he has taken the radical step of cutting one of the show’s beloved comic songs, “Chrysanthemum Tea,” an intricately plotted account of the ineffectual first Shogun’s refusal to deal with the American threat that ends with him being poisoned by his own mother. Admirers of the musical will miss it, but eliminating the song simplifies the political throughline and keeps Kayama at the center of the narrative, a choice that pays off in Eng’s nuanced performance. 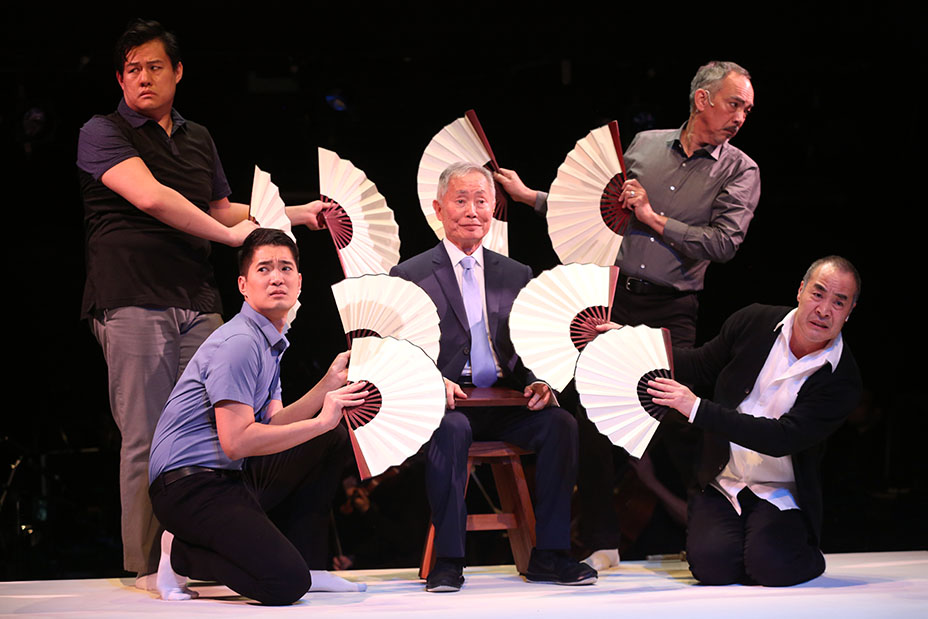 One of the most ingenious songs from this or any other Sondheim work is the Rashomon-like “Someone in a Tree,” a captivating account of Kayama’s elaborate deception of the Americans in a treaty hut, recalled by an old man (Sesma) who witnessed the events as a young boy (Austin Ku), and by a warrior (Kelvin Moon Loh) who hid beneath the floorboards, listening. It’s an absolutely transporting vignette, beautifully performed, that blurs actual history with unreliable memory from three compromised perspectives.

The inevitable return of the Americans is played for humor in the hilarious Gilbert & Sullivan-style patter of “Please, Hello,” in which American, British, Dutch, Russian and French admirals — all of them comically exaggerated national stereotypes — come one after the other, angling for trade access. Loh and Harada are especially funny as the Russian and French admirals, respectively.

The story then advances to show how the fortunes and attitudes of the key figures have changed since the arrival of the foreign powers. That leads into arguably this production’s most emotionally charged song, “A Bowler Hat,” in which we see Kayama, now widowed and promoted to Governor, adopting the customs and accoutrements of the foreigners, while the fisherman-turned-samurai Manjiro, one of the earliest advocates of American interaction, has reverted to strict Japanese traditionalism, underlining the growing distance between them. The darker impact of the Western presence is seen in “Pretty Lady,” when three horny British sailors approach a young woman they assume to be a geisha, triggering violence that is echoed in similar attacks by samurais against the invaders.

Doyle stages each song and story interlude with exacting precision and a graceful sense of spatial dynamics, continually reshaping the mood with a deft assist from Jane Cox’s lighting. And while each musical set piece feels distinct from the one that preceded it, there’s a mesmerizing fluidity to the pared-down production — an uncluttered harmony that’s both enchanting and mournfully sad. The story may be confusing at times to those unfamiliar with the show, but the overall effect is transfixing. The 10-member, all-Asian-American ensemble is superb, with deeply affecting work, in particular, from Eng, Mendoza and Masako Haley. This is a lovingly mounted staging of a unique show, a sorrowful account of violation, naivety and shattered peace, and a culture clash musical imbued with solemn humanity.