In the colony known as Hollywood, beekeeping is on the rise. “People suddenly have time on their hands at home,” says Andrew Ward, a first assistant director (Saving Private Ryan, Westworld). Originally from Ireland, Ward started beekeeping as a teenager, mowing lawns to raise the money for equipment.

Though Ward had to leave his bees behind when he moved to the U.S. in the mid-’90s, he happened upon a beekeeping conference in Utah 10 years ago and has had hives in his backyard ever since. “I was kind of reborn into it.”

“It’s picked up [since COVID- 19 began],” says Paul Hekimian, director of HoneyLove, a nonprofit dedicated to saving bees. “People are doing things that they never thought they would ever have a chance to do.” He adds, “We’re kind of the Lorax of the bees. We educate the public that honey bees are safe and that we need them. Bees pollinate one in three pieces of food that we eat.” The son of a beekeeper, Hekimian works with several stars on maintaining their hives, among them Aaron Paul, Sophia Bush and longtime beekeeper Jennifer Garner. 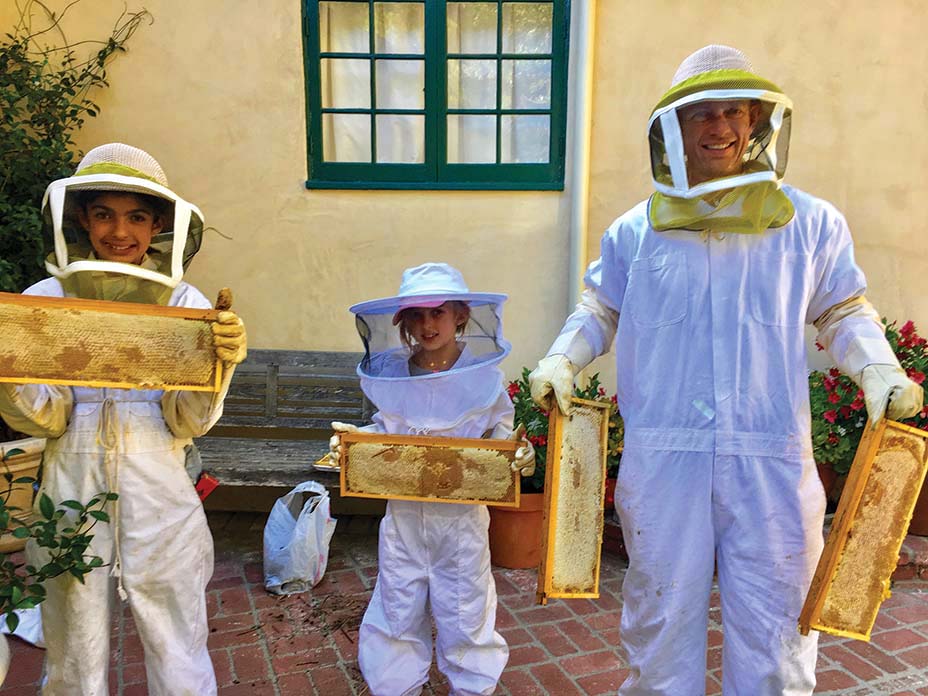 Other famous enthusiasts include Morgan Freeman and Leonardo DiCaprio. Scarlett Johansson got started when Samuel L. Jackson gifted her a hive back in 2009, while Zac Efron’s new sustainability minded Netflix show Down to Earth features an episode on bees.

“It’s the most calming experience,” says Sony Pictures senior vp of production Eric Paquette, whose family has kept bees for two years. “[Our bees] know my scent, so I can get really close and just watch them. It’s pretty therapeutic.” After deciding to begin his beekeeping journey, the film exec wound up in an equipment store where he met sixth-generation beekeeper Annay Serrano, who became his mentor.

“I started beekeeping because my daughter has seasonal allergies,” continues Paquette. “I’d always heard a way to combat allergies is to have local honey. Local means the distance that a bee travels to get pollen, which is about a 6-mile radius. So I thought, ‘I need to become a beekeeper and have my own honey.’ “ 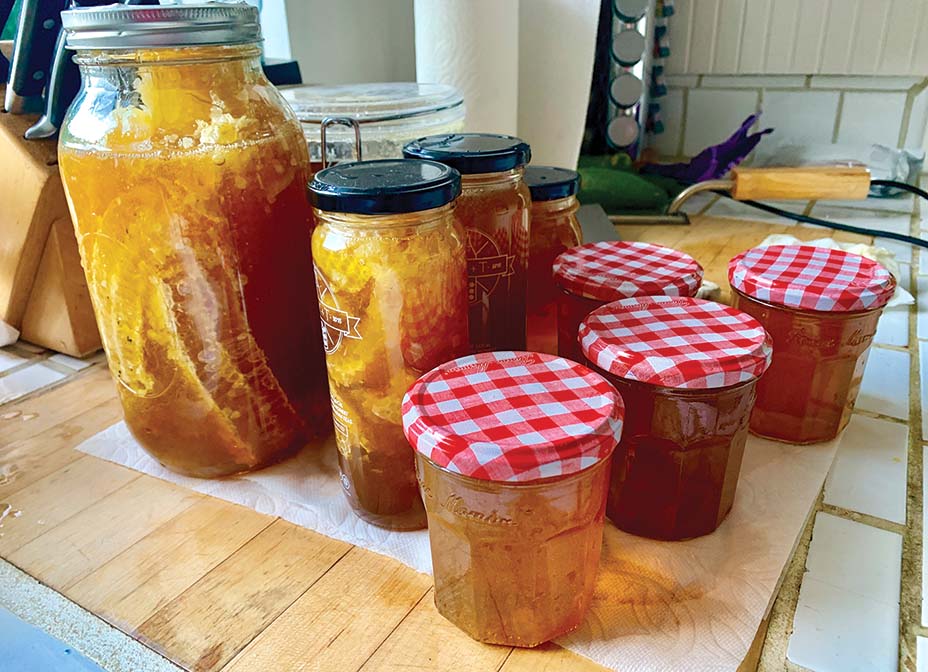 Says Solstice head of production Lisa Ellzey, “Given the stress involved in what we do for a living, focusing on the bees for a short while every few weeks takes my mind off of things — but it’s not less dramatic!” Ellzey has been a beekeeper for two years, also under the tutelage of Serrano, and had her first 60-pound honey harvest last fall. “You can’t believe how much drama goes on in a box of 20,000 mostly female bees. Definitely more intense than most staff meetings.”

Proper beekeeping involves quite a bit of work. “The most important thing is to attend classes and find a mentor,” says professional beekeeper John Lyons, who used to maintain Garner’s hives. “In an urban setting, you’re obliged to maintain [hives] effectively. Otherwise, if they swarm, it’s quite a nuisance for your neighbors.”

To keep bees from becoming defensive, explains Ward, “You’ve got to be careful about the ratio of what they’re producing and what you’re taking away — so you don’t rob them of the food they were meant to consume themselves.”

A hive requires maintenance, especially in the beginning. “A younger hive will only have 600 to 700 bees,” Ward continues. “In a more established hive, you’ll have tens of thousands of bees.” A beekeeper must monitor the queen bee, make sure she’s laying enough eggs and doesn’t show signs of disease, and replace the queen if she dies. Maintenance also includes checking for disease and infestation, especially from ants. “A beehive is a box of honey, basically, so you have to constantly make sure there are no ants around,” says Paquette.

After a few years, a hive can function well with less involvement. “Bees do better when you don’t hassle them,” Ward says.

The most popular entry in beekeeping at the moment is the Flow Hive ($629-$859), a hive created in Australia that’s designed so that one can harvest honey without opening it. “All the cool kids are doing it now,” Hekimian jokes of the product. Since the pandemic began, David Beckham and Chris Hemsworth have begun beekeeping with Flow Hives.

The hives are not the only cost. While an average hive costs less than $200, a beekeeper also needs a suit ($50-$300) and, of course, bees (around $150 for a few thousand), plus there’s the cost of books and classes and food in the winter (when fewer flowers are blooming). 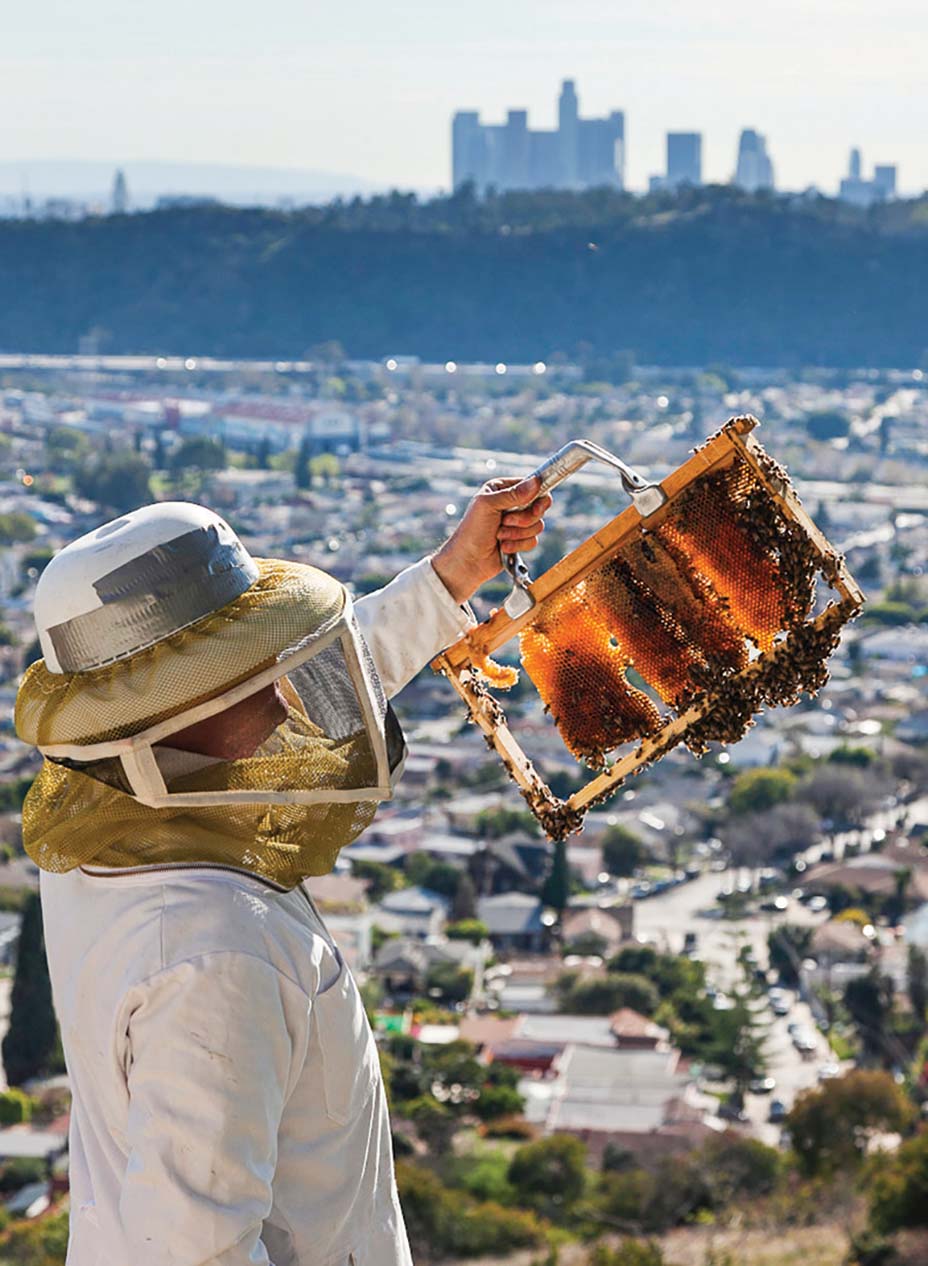 However, in L.A., one may not need to buy new bees for a hive thanks to the area’s significant bee population. “In urban L.A.,” says Lyons, “I could put an empty box out and I would have a swarm within two or three weeks.”

Los Angeles, say experts, is an ideal spot for keeping bees. “We don’t have winters. You can have bees produce [honey] all year long,” says Hekimian, who adds, “They’re thriving in an urban environment because there’s less pesticides.” And, says Ward, “there’s so much [plant] diversity. You don’t need to plant specific things in a garden because there’s so much food within a short radius for them to forage on.”

The process is not for everyone. Lyons’ advice is for people to “not amuse themselves that it’s a romantic pursuit.” While Paquette stresses the importance of working with professionals to learn the art — “Starting from scratch isn’t something you should try on your own” — he does add, “You can YouTube a lot of things.”