Here are nine takeaways, tips and trends from the festival.

During a demo of his Major Glow shimmers, Ta also teased his upcoming line of blushes and rose gold blending brushes. “I hate when blush is too impactful at first. I love building it as you go. And you want it to look like a cloud,” said the makeup artist to Olivia Munn, Shay Mitchell and Gigi Hadid.

2. Ta uses blush and bronzer as eyeshadow for a monochrome look.

Ta likes to use his blush as both an eyeshadow and blush, a technique he also uses with bronzers (namely Benefit’s Hoola matte bronzer). “Whatever bronzer I’m using, I like the bronzer to be in the crease. I like everything to melt and marry together,” Ta said. On the eyes, “I always only use one to two colors because I love monochromatic looks,” though he admits the eyes are “my downfall because I’m so slow.”

3. Gigi Hadid tipped Ta off to the perfect contouring brush.

At the workshop, Ta used one of his “favorites” for contouring the model’s face — Tom Ford’s Shade and Illuminate ($88). “This is a Sephora brush and my client Gigi showed it to me; it’s the perfect brush for contouring,” he said. “This brush is honestly so easy for that. You just want to press the product into the hollows of the cheekbones. … I like to stamp it on where I’m going to have that definition first.” 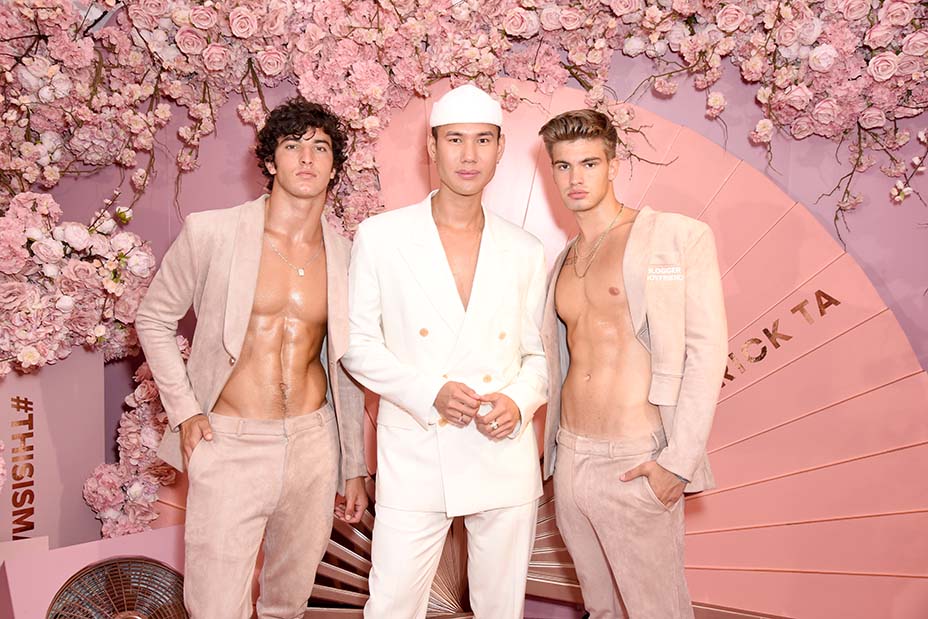 De Jager, best known to her 12.2 million YouTube followers as NikkieTutorials, was tapped by Marc Jacobs Beauty to demonstrate a full face of makeup upon her return from New York Fashion Week. “Twenty hours ago I was in New York City,” she noted, saying she was there applying makeup to Lila Moss Hack, Kate Moss’ daughter. “Of course, you have such a stunning mom. Guess what you are? Stunning. So she is now a model, too, of course and she has become a face for Marc Jacobs Beauty and yesterday we tried some new products out.”

She said her favorite client has been “Price Tag” singer Jessie J: “She is the funniest human being ever. I love that dry British humor and she’s all that,” de Jager said. “When she first walked in, she had like this fluffy neon pink coat on and I was like, ‘Oh, she’s a mood.’ She sat down next to me and she goes, ‘Morning love, I will speak to you in five minutes.’ … She takes a sip of coffee: ‘Nice to meet you!’ I go, ‘This sets a tone, baby.’ … Yeah, she was the best. At one point we had to stop filming because I was crying my makeup off. That was great.”

Her work with Snoop Dogg and Marc Jacobs Beauty also earned de Jager a Streamy nomination for best branded content video (ceremonies take place Sept. 11 and Dec. 13). “The fact that Snoop Dogg said yes to us — I was like, ‘He said yes?'” de Jager laughed. 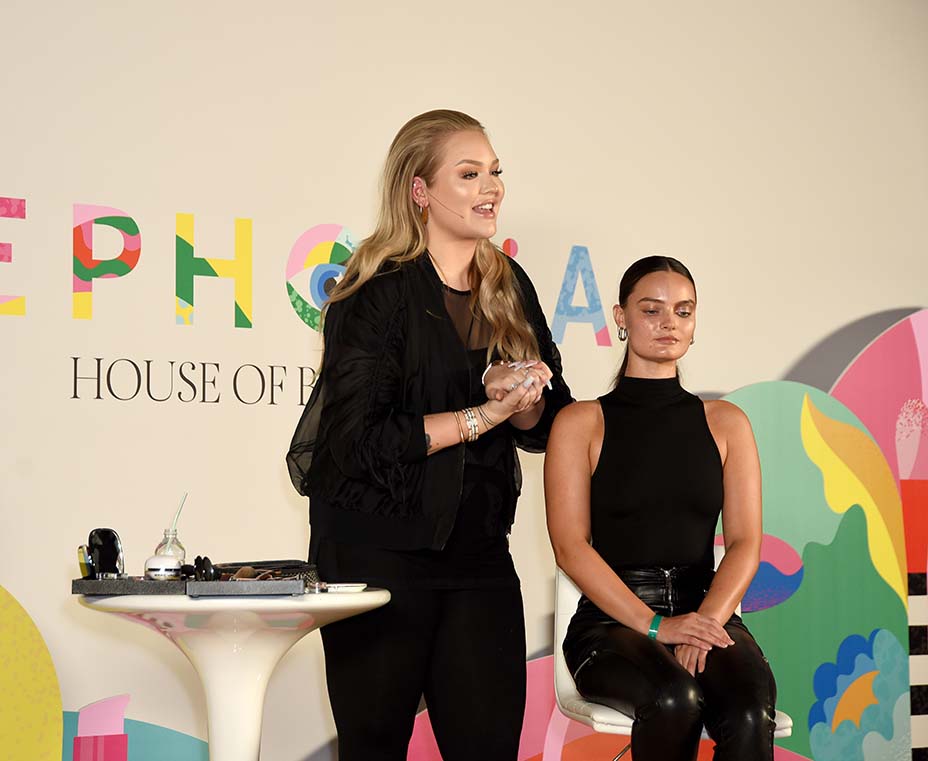 5. NikkieTutorials said she was “traumatized” by her collab with Too Faced.

Her decision to team with Marc Jacobs wasn’t an easy one, with the influencer saying she was “traumatized” after working with Too Faced; she reportedly only made $50,000 on her The Power of Makeup by Nikkie Tutorials palette with Too Faced, even though it sold $9 million worth, according to Allure.

“Not talking about that, but I was scarred for life, and I was like, ‘OK I’m never working with anyone ever again.’ And then [Marc Jacobs] contacted me and they gave me their vision and I said, ‘OK,'” she said. “I feel proud to be working with such a powerhouse. I mean Marc Jacobs knows what he’s doing. Fashion on point. Beauty on point. … It was a trustworthy match.”

6. Glitter is the trend to watch.

De Jager forecasted upcoming fall trends, namely “glitter glitter glitter — glitter everywhere and I’m so happy to see it. For years I’ve been fighting for the glitter and nobody wanted to listen to me.”

7. Blue light protection is the next big thing in skin care.

Skin care expert Sturm (with clients including Rosie Huntington-Whiteley, Emma Roberts and Hailey Bieber) told the Sephoria crowd about the importance of anti-pollution and blue light protection, explaining that blue light from computer screens and phones can be worse for the skin than UVA and UVB rays from the sun. 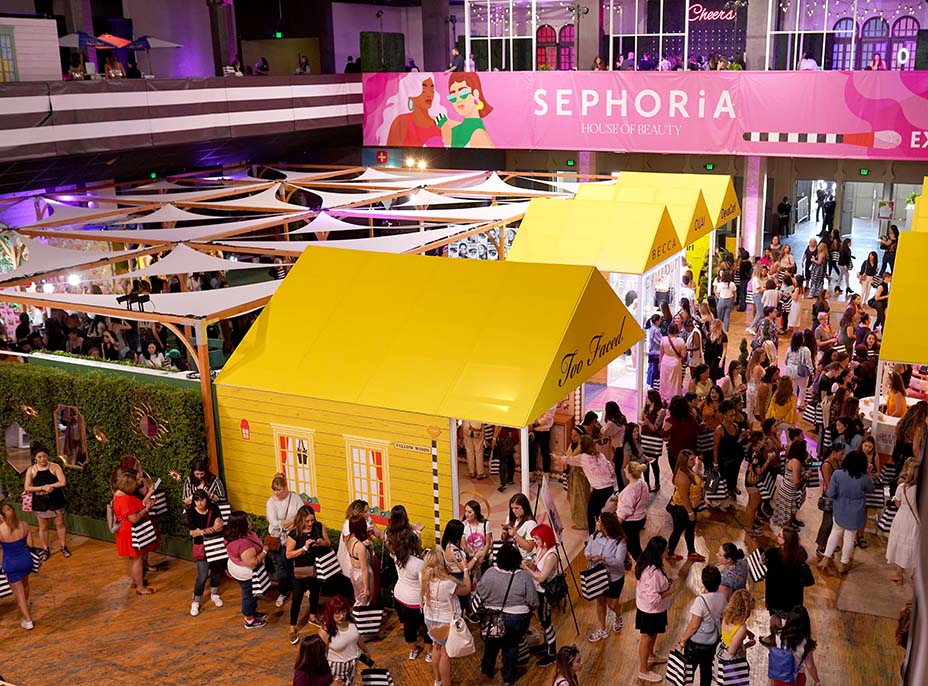 8. Amoruso reflected on her past style choices.

Amoruso, immortalized on the Netflix show Girlboss, reflected on some of her past beauty looks, such as those choppy bangs. “I cannot Google myself, because it’s like, ‘How many people [have I] been?’ And it’s great. We should all be different people at different stages in our lives. We should totally experiment. But, looking back, I was a total caricature.” Yet she still has an affinity for the cropped style: “It was a really good time in my life, so I’d say it was my favorite one.”

Amoruso also had “the Marla Singer from Fight Club hair” in her 20s. “I wore tattered dresses and stuff and thought I looked really magical. That was a good one,” she said. Now the entrepreneur is looking to try out more eye colors, such as a neon green eyeliner in line with the Euphoria-inspired aesthetic this season.

9. Streicher shared the must-have product to getting her signature feathered brow.

During her talk, Streicher — the brow groomer, who has worked with Mandy Moore, Emily Blunt and Mila Kunis — showed audiences how to get her popular feathered brow using Hourglass Cosmetics products.

“You know, I love a full brow. Not everyone has a ton of hair. But I like this collection because you can mix the different colors and tones and textures to create actual hair because, at the end of the day, hair is 3D and product is sometimes one dimensional,” she said. “So I love layering the different products and using the least amount of product possible, so the hair is the star and not the product.”

Streicher said if you have only “two seconds” to build a brow, she recommends starting with the Hourglass’ Volumizing Fiber Gel ($28). She stretches the skin on either side of the brow for a tight canvas and then, using the longer bristles, will backcomb to pick up the hair before laying it back down in the direction it grows. The next step is filling it with minimal strokes.