On the surface, Paul Bettany’s 2004 romantic comedy, Wimbledon, didn’t set the world on fire, but the experience just so happened to introduce the English actor to a fellow cast member by the name of Jon Favreau. A few years later, Favreau called up Bettany and asked if he’d perform the voice role of JARVIS, Tony Stark’s A.I. assistant in Favreau’s Iron Man, which set the Marvel Cinematic Universe in motion. Thirteen years and another six movies later, Bettany finds himself co-starring as Vision in Disney+’s WandaVision, alongside Elizabeth Olsen’s Wanda Maximoff.

With a narrative that’s told through the lens of classic TV sitcoms, WandaVision finally allows Bettany and Olsen the chance to show their range as comedic actors, something the high stakes of their MCU films mostly precluded. While Bettany welcomed a tonal change of pace after dying twice in front of Olsen’s Maximoff in Avengers: Infinity War, he wants to reassure Marvel fans that Marvel-style chaos is inevitable.

“Yes, initially, it really was [relieving], but it’d be a pretty boring TV show if it stayed that way,” Bettany tells The Hollywood Reporter. “What you will begin to realize is that it’s not an arbitrary decision or a cute decision to set this story in these sitcoms. What’s wonderful about the comfort level that comes with these sitcoms is that you have a seemingly insoluble problem that when the couple unite, the problem becomes eminently soluble. Unfortunately, real life isn’t quite like that, and it can’t stay that way forever.”

At the center of WandaVision’s first three episodes (and then some) is a Twilight Zone-esque mystery that perplexes Vision, as well as the audience. In order to convey such confusion, some actors prefer to know as little as possible about their overall story arc, but Bettany chose the opposite approach in this case.

Bettany explains: “I wanted to know where it was going so that I could pitch where he starts to get confused and when he starts to really investigate what the hell is going on in this town. It seems like a really strange place that is compelled to change its decade every week.”

Vision is yet another example of how talented Marvel Studios’ hair and makeup departments have been over the years, and perfecting the character’s beetroot-colored skin, as of Avengers: Age of Ultron, took a tremendous amount of trial and error. However, since WandaVision includes at least two episodes in black and white, Tricia Sawyer’s makeup department had to improvise.

“In the black-and-white stuff in WandaVision, I am blue in real life. They made me blue because it looked more like that purple, aubergine color you’re expecting,” Bettany shares. “It somehow didn’t look right when I was red, in black and white.”

In a recent conversation with THR, Bettany also discusses why he previously thought that Marvel Studios boss Kevin Feige was firing him from the MCU, the relaxing way in which he removes Vision’s paint-like makeup, and singing in front of a live studio audience.

It’s incredible how a voice role in 2008’s Iron Man has led you all the way to WandaVision. When somebody else offers you a voice role now, or even a cameo, is part of you reluctant to say no since that offer could also lead to another decade-plus of work?

(Laughs.) Yeah, will lightning strike twice? Yeah, I got really lucky with that one. You don’t have to tell me. It’s a very instructive lesson, actually, in just being polite, being easy to work with, and making ‘em laugh. 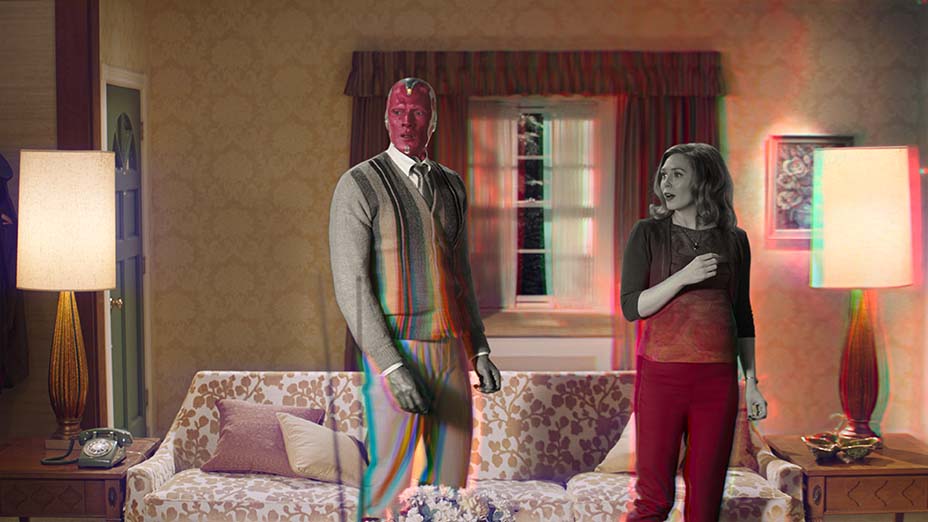 There’s a mystery at the center of WandaVision, and Vision is unaware of what’s going on, much like the audience. Did you avoid learning the bigger picture so that you could feel the same confusion that Vision was feeling from episode to episode?

No, I didn’t do that; I didn’t. I wanted to know where it was going so that I could pitch where he starts to get confused and when he starts to really investigate what the hell is going on in this town. It seems like a really strange place that is compelled to change its decade every week.

In relation to your other work, when did Kevin first raise the subject of WandaVision to you?

I had just died in Infinity War — twice. So my contract was up, and I got a call from Kevin Feige saying, “Can you come into the office?” And when the boss calls you up and says to come by the office when your contract is up, you know what that means. So I looked at Jennifer [Connelly], and I was like, “I’m outta here.” So I went in, and I didn’t want anything to be uncomfortable between us all because it’s been such a great time. So I walked in and said, “Kevin and Louis [D’Esposito], I love you. I totally get it. It’s been a great run and no hard feelings.” And Kevin went, “Wait, are you quitting?” And I went, “No, aren’t you firing me?” And he went, “No, we were going to pitch you a TV show.” So I went, “Oh, okay. Yeah, I’m in.” (Laughs.) So that’s how that happened. I’m always thinking I’m about to get fired. I’ve spent my life thinking I’m about to get fired. 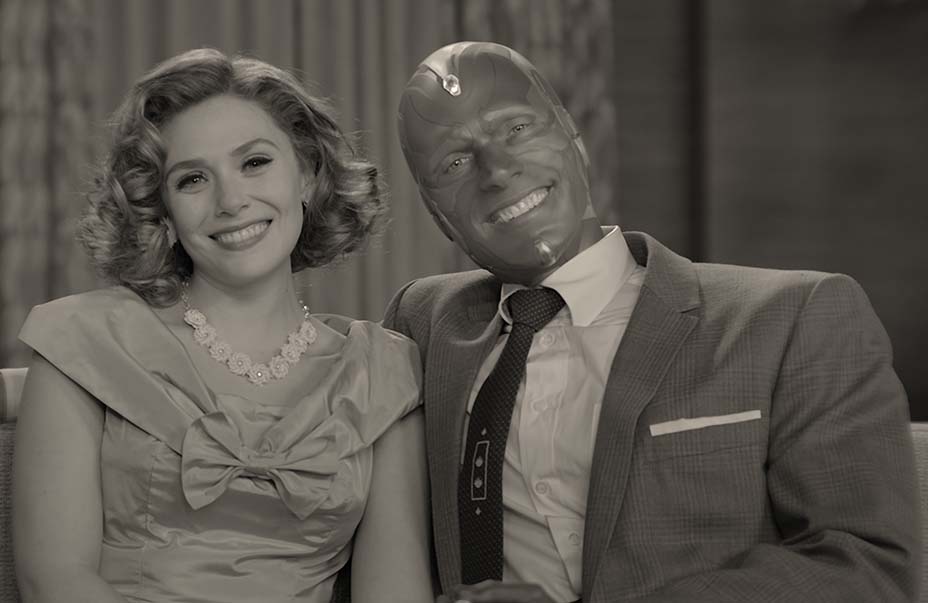 Since you performed the first episode in front of a live studio audience, did you often have to delay your responses according to the audience’s reaction?

That’s a really good question. When we had the live studio audience, you can feel when they’re laughing and you wait for them. I wish I had put more thought into that, actually, in episode two. It’s difficult, and it’s one of the wonderful things about having a live audience. It’s really interesting where people laugh and it’s often not where you think they’re going to. I don’t really know what I would’ve done differently, but I feel like I should’ve thought about it a little bit more. We had so many other things to think about that I didn’t think about where the laugh track was going to go, somehow.

Out of curiosity, was your family part of that lucky studio audience?

No, my family was not a part of that studio audience. 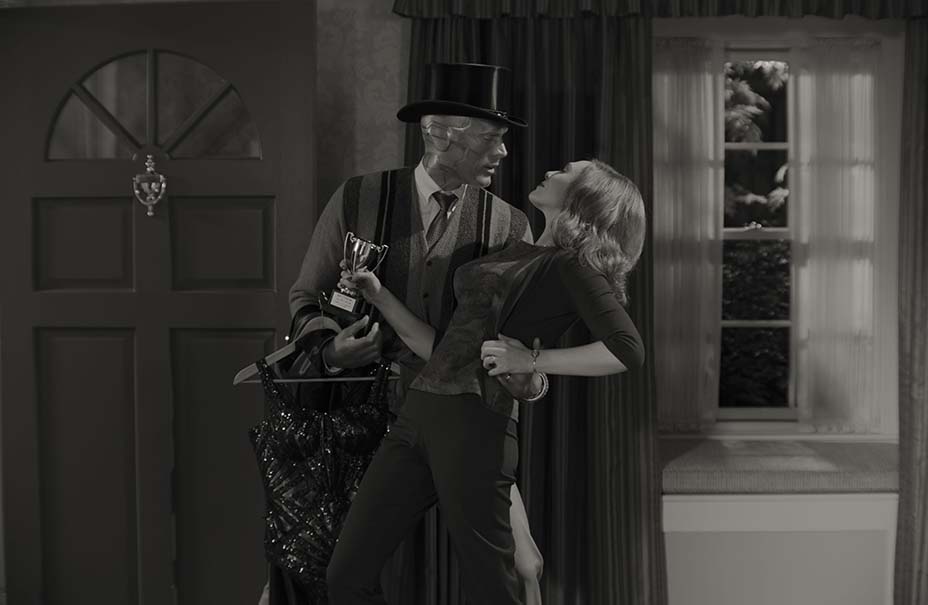 As you just mentioned, the last time we saw Vision and Wanda together on-screen, she had to destroy him, and then watch him get destroyed again by Thanos. Was it relieving in a way to reunite without such intense high stakes — at least for now?

Yes, initially, it really was [relieving], but it’d be a pretty boring TV show if it stayed that way. (Laughs.) What you will begin to realize is that it’s not an arbitrary decision or a cute decision to set this story in these sitcoms. What’s wonderful about the comfort level that comes with these sitcoms is that you have a seemingly insoluble problem that when the couple unite, the problem becomes eminently soluble. Unfortunately, real life isn’t quite like that, and it can’t stay that way forever.

Has the makeup and prosthetic process gotten any easier at this point?

That’s so very sweet of you to ask. Yes, it has, a little bit. It’s slightly mitigated by not having to wear the actual cowl. But, now, it’s still the bald cap which is attached underneath my eyebrows, by my eyelids, and it goes all the way over. And then, they put dots on… It feels a lot less claustrophobic, but the consequence of having to change so often, when you’re shooting every day, is that your skin is ragged. It’s not like makeup; it’s more like paint. But we’ve found a really good solution. Actually, getting it off seemed to be the really tricky thing because it takes a long time. It’s an over-an-hour process of taking the makeup off, and we found that the thing that really helped us be gentle with my bella faccia was to spend 20 minutes in a sauna with a glass of wine. So, when I begin to sweat, it would want to lift off.

When Vision was killed by Thanos in Avengers: Infinity War, he turned completely gray. Did they take the color out of you in post, or was that done practically on the day?

Yeah, that was done in post. I was confused there for a minute because I’ve been so many different colors. In the black-and-white stuff in WandaVision, I am blue in real life. They made me blue because it looked more like that purple, aubergine color you’re expecting. It somehow didn’t look right when I was red, in black and white. So I’ve been so many different colors that I can’t always remember, but with Infinity War, I do remember.

Since WandaVision afforded you considerably more time with your character, did you make any requests to [head writer] Jac Schaeffer or [director] Matt Shakman as far as a side of Vision you wanted to explore?

Yes, that really has been a wonderful thing about working for Marvel. Everybody says this after they work with Marvel, but it’s how collaborative they are. Everybody says that, always, because it’s an easy thing to say in junkets and interviews, but it happens to be really, really true in this circumstance. Kevin and the writers came up to me, even as early as making Captain America: Civil War, and asked what my fantasies were for the character, going forward. And I saw some of those realized — not all of them — as we moved forward. So they’ve always been incredibly, at least seemingly, really interested in hearing you out, and that’s been true across the board. It’s not specific to me; I’ve heard that from everybody.

I’m getting the wrap, but I have to hear your first reaction upon reading the following: “And suddenly, Vision sings The Coasters’ ‘Yakety Yak’ in front of a live studio audience.”

(Laughs.) It was worse than that! It was worse than that! We had another song planned. I play the guitar, but I don’t play the ukulele. They’re different shapes, but I’m a quick study on stringed instruments. So it was much worse than that. I had learned another song, and on the day, they came up to me and went, “We’ve got a problem.” And I went, “What’s that?” And they went, “We can’t play that song.” And I went, “Whaaat!?” And they said, “But we can play ‘Yakety Yak’!” And I went, “What’s ‘Yakety Yak’!?” (Laughs.) I didn’t know “Yakety Yak” so I had to learn “Yakety Yak.” On the couch, I think we also sang “Old MacDonald,” and I had to figure it out there, in the wings, before playing it in front of an audience.

***
WandaVision premieres Jan. 15 on Disney+. This interview has been edited for clarity.

Kathryn Hahn on 'WandaVision': "I Couldn’t Have Dreamt a Cooler Part"