For years, Pia Guerra was an artist known primarily for her work on Vertigo’s Y: The Last Man, as well as DC’s Black Canary and Hellblazer. But now, she’s becoming as well known — if not even more famous — for the cartoons she’s creating in response to the current political climate, which started on social media and have since appeared in The New Yorker and The Washington Post.

In October, Guerra’s first collection of her political work, Me the People, will be published. Heat Vision talked to the artist about how she got started on this path, and what good it does in the grand scheme of things.

Prior to the election of our current president, you had worked on political cartoons occasionally — you responded to the Charlie Hebdo attacks — but were known primarily as a comic book artist and co-creator of Y: The Last Man. You touched upon this in the official launch announcement for Me the People, but what was it about today’s environment that prompted your current output?

We had just spent a year living the day-to-day shit show of the campaign. Every day, a new “Hey lookit me!” that everyone seemed to laugh off as a great joke, and after election night, we were faced with potentially four years of this daily departure from common sense. I needed to express some anger over that. Everyone has something they use to vent, drawing was mine, and there was and continues to be a lot to vent about. 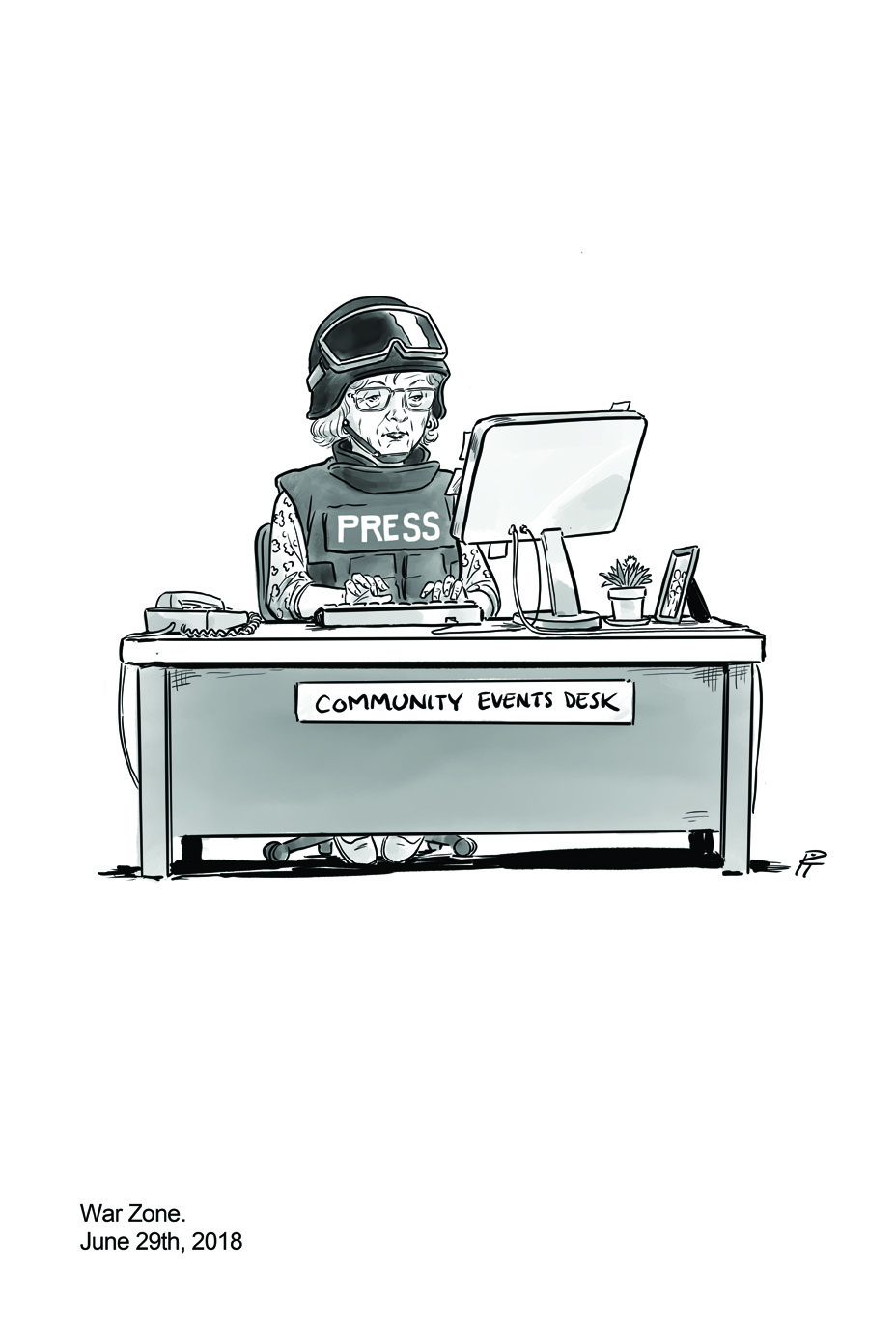 Beyond the Hebdo cartoons, what’s your background with political art? Were you an editorial cartoonist before moving into comics?

I did a few for the high school paper but that was about it. I was always set to draw comics, but every now and then I’d have an idea for a joke or commentary on an event that I would share with friends. With Twitter and Facebook, that sharing went out a lot further. After seeing how the cartoons resonated with others, I considered doing more.?

As you said, these cartoons started as something you shared on social media, and later became the basis of a weekly spot with political cartoon hub The Nib; has that changed the way you create the work or choose what you’re going to comment on?

It’s not as random now. I watch the news everyday, I read articles and scan social media for what’s being talked about. The trick really has been to find an image before the news cycle sweeps a chosen topic away with the rest of it. My comic book work is mostly on hold for the time being. At some point when these cartoons started getting traction, I decided to keep doing it until this administration was done. Part of the motivation is about it being therapeutic, part is to act as a cheering squad to others to be more proactive and vote, and another part is to just chronicle this period of time and all the craziness happening.

What is your process for these cartoons? Do you write these cartoons before drawing, is there no real line between image and caption, is it an immediate “I know what I’m doing!” epiphany or just the opposite?

It’s a lot like thinking up a joke. You read a story, you find the part that makes you roll your eyes — that hypocritical spin that makes you throw your arms up — and that’s where it starts. I focus on that, and run through images that best describe how I feel. Sometimes it’s obvious, boom, there’s the take…. But other times, it can be a slog, especially when there are a lot of components involved.

There was one cartoon I was working on for a couple of days about the Parkland shooting. It was dark and angry, showing the Grim Reaper with an AR-15 standing over a chessboard, where all the pieces were schools and he was picking out which one would be next. I struggled to make it clear. The perspective was off and I had to redo the board a few times; I was about to set it aside when CNN started showing live footage of the Parkland students at a rally and Emma Gonzalez stepped up and did her amazing “We call BS!” speech. And then the image changed — it wasn’t about who was next, it was about all these kids standing up to say no. Completely changed the tone of the cartoon. You never know where it’s going to go, just keep listening, keep drawing and see what comes up. 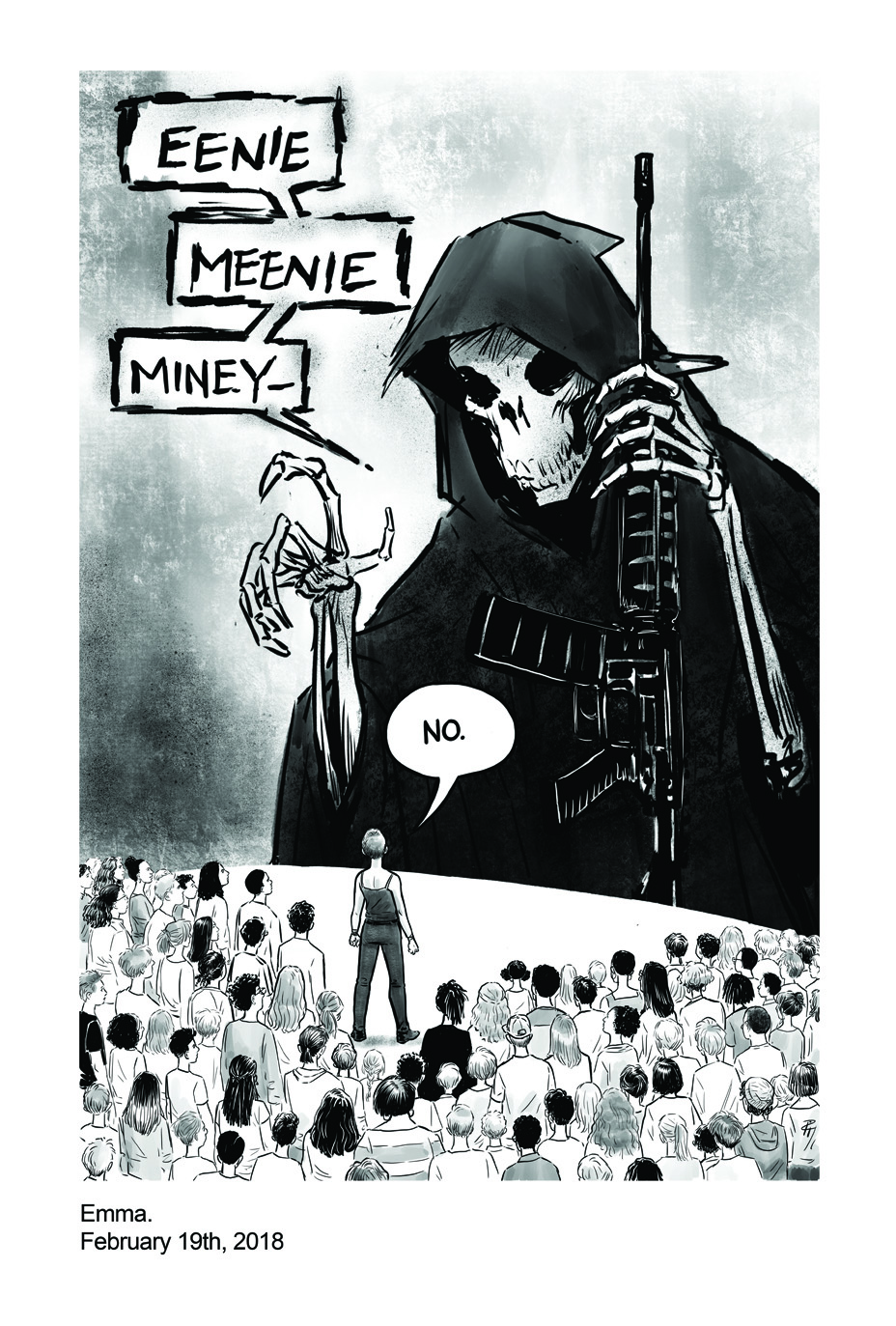 I’m wondering, what has the feedback been like to the work? Obviously, both The Nib gig and this new collection speak to it being positive, but what about comments from individuals? Has there been any particularly memorable encounters with fans — or nonfans, for that matter?

The reaction has been so not what I expected. I’ve had positive feedback before with Y — some very emotional responses, too — but, back then, social media was still young so it wasn’t that wall of responses, [it was] lots of nice emails, hugs at conventions.

When some of the cartoons got going, it would come in waves. I’d scan through to see where it got started like, “Oh, this person with a lot of followers shared it, boom, a bunch of responses.” Then it would settle a bit, and then, someone else picked it up and pow, more. Most of it was positive, but then some jerks would jump in and try to pull me into these minibattles and I could waste time arguing or just block and move on. Sometimes, there were really interesting and engaging conversations that came out of it. It hasn’t been boring.

After the Hero’s Welcome cartoon went out, I got a response from a teacher who said she saw it while in class and started crying, and then the students asked her what was wrong, and she shared it with her class and then everyone started crying. That was very moving and intense. Seeing Dan Rather repost it was more than a little mind-blowing. 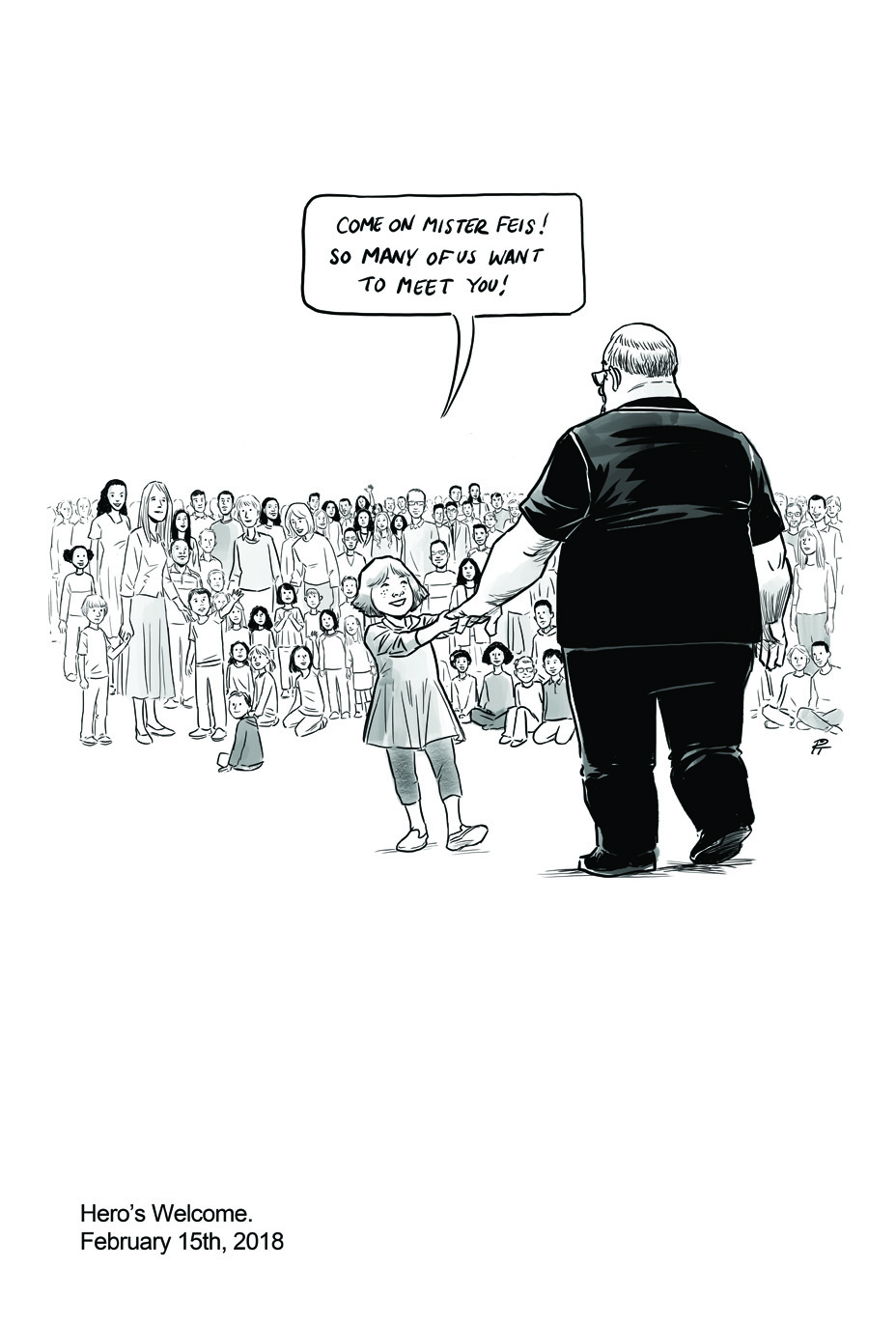 You mentioned before the idea of these cartoons being therapeutic to you. How helpful has being able to create this work been personally? Not only in terms of personal expression — or venting, screaming, crying and so on — but is there also a sense of connection, community, something similar that’s come about as a result? The short version of what I’m asking, I guess, is, has creating this work helped…?

Probably the best thing is seeing a lot of people responding with essentially, “Yeah! That’s how I feel, too!” In times like these, where so much is happening so quickly and there’s not a lot of accountability, it’s easy to feel isolated, to feel that — despite being in the majority by 2.8 million votes — you still don’t have a voice anyone wants to hear. But then you see a friend share a cartoon that speaks to you and you feel better because it’s not just you. The person who drew this feels that, your friend who shared it feels that, the people you share this with may feel that.

There’s community there — feeling that you’re all on the same page, that it’s not just you who thinks all of this is nuts. For me, seeing people share this stuff, the comments the likes, it’s the same. I feel energized to do more, I feel hopeful that all of this will change and the damage done will be mitigated.

More than anything I hope it encourages people to express themselves in their own way. Find the thing they love and use it to share their hope, too. 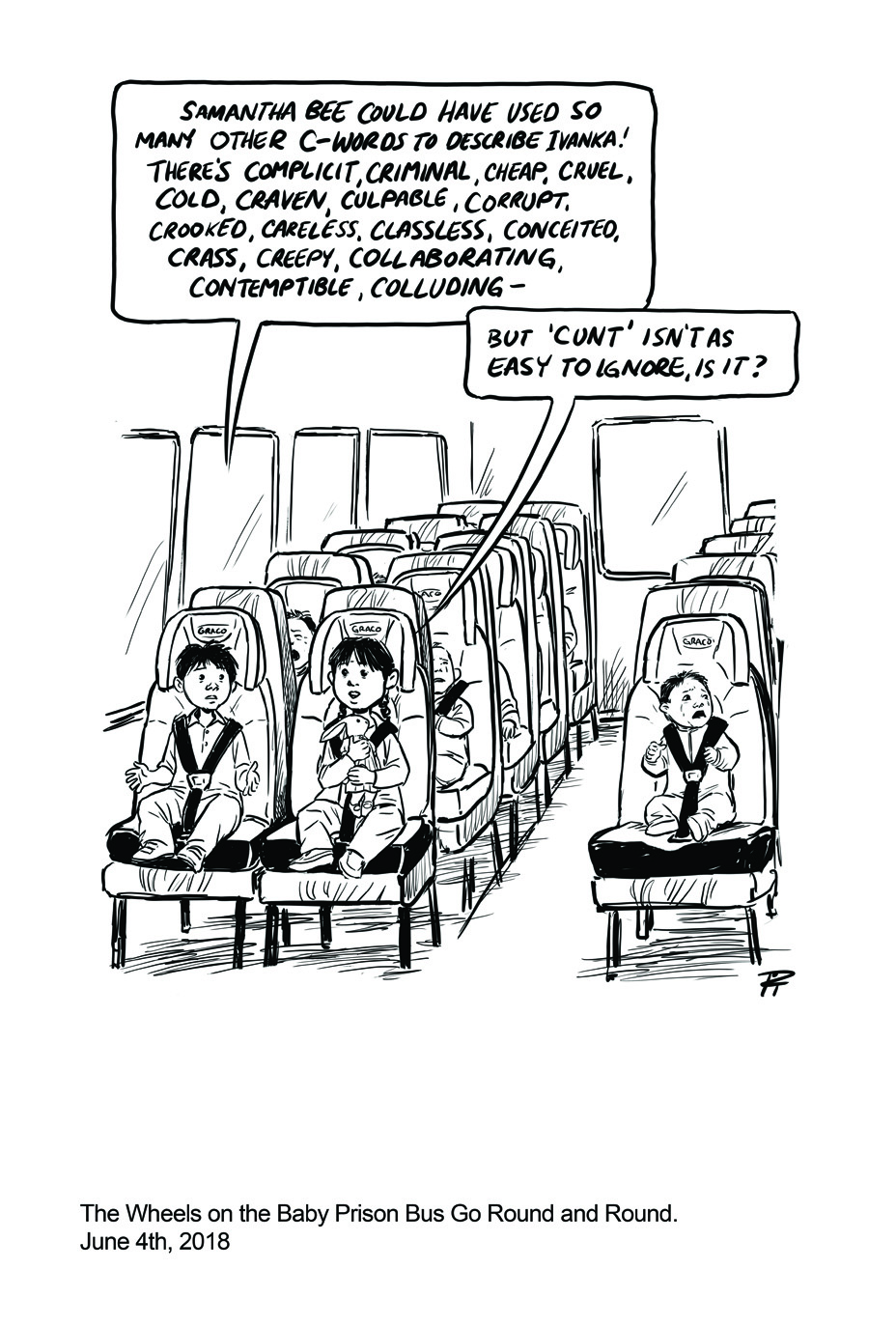 Me the People will be released by Image Comics on Oct. 3, both digitally and in print.