Opening Dec. 22, The Post is Steven Spielberg’s 1971-set political-news thriller starring Meryl Streep as Katharine Graham, the first female publisher of The Washington Post, and Tom Hanks as the paper’s editor Ben Bradlee, as they race to expose a cover-up of government secrets and the role of the news media as truth teller in American democracy.

Graham inherited the top job after the death of her husband, Post publisher Phil Graham, and the film’s storyline of how she discovers and asserts her power amid a newsroom full of men is tailor made for today’s feminist moment. Like Queen Elizabeth in The Crown, she must navigate two worlds — one, Washington society and at-home domesticity, and the other, traditionally-male corridors of power the newsroom, the board room and the stock exchange.

Meryl Streep Boards 'Only Murders in the Building' at Hulu 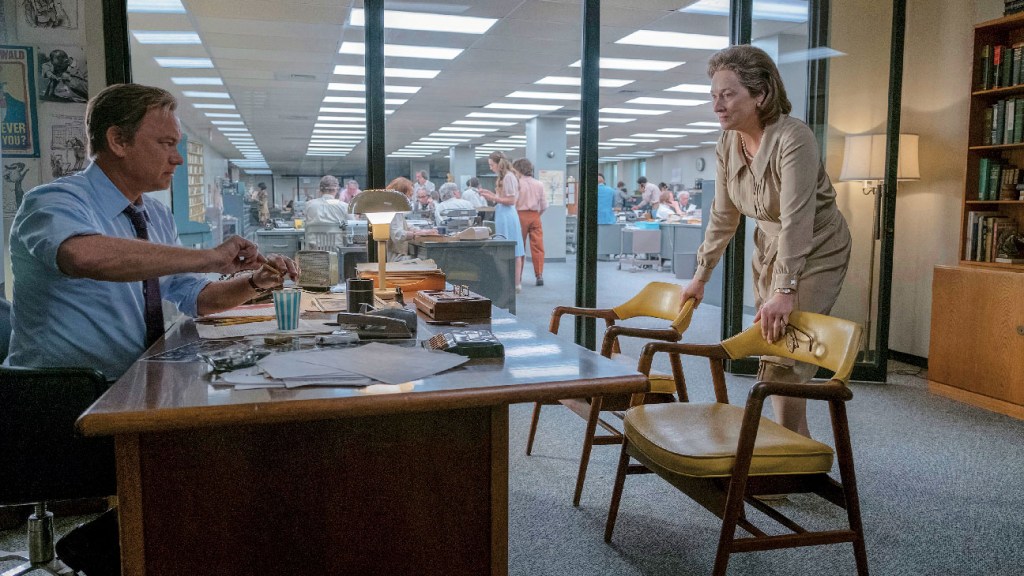 Costume designer Ann Roth was charged with creating Graham’s wardrobe for the film, from pussy bow blouses to a scene-stealing “retirement dinner caftan.” With a career that spans six decades and more than 200 films (The English Patient, The Birdcage, Silkwood, The Day of The Locust and Klute among them), Roth is something of a legend herself, a legend who as it turns out, is rather uneasy talking about her work as a costume designer at all.

“If I ever want to work with Steven Spielberg again, and believe me, I fell in love with him, I do not want to talk about the costumes because that’s not what this picture is about,” she says during a recent interview. “It would be embarrassing to me if they took attention away.”

While it’s true that costumes are about creating character, not a fashion statement, in this film, they tell a thousand stories about who Graham was and who she became.

Roth and her team used existing photos of Graham, consulting such books as her own Pulitzer Prize-winning autobiography “Personal History,” as well as “The Georgetown Set: Friends and Rivals in Cold War Washington” by Gregg Herken and “Georgetown Ladies Social Club: Power, Passion and Politics in the Nation’s Capitol” by C. David Heymann. They didn’t copy her clothing, however, but rather built a wardrobe that mirrored the evolution of her character.

“She was very tall, which gave her a sort of patrician grace,” says Streep. “She had a bearing that was intimidating to some people, even as self-conscious as she was. So we worked hard to get to that distinctive quality. I’m a shorty, so I had to sort of build it up a little bit to get that.”

I chatted with Roth about the research, fabric sourcing and storytelling that went into building the costumes for Streep’s Kay Graham.

THR: You obviously had a lot of primary source material and photos to draw on. What did you look at and did you recreate her clothing faithfully or more try to tell your own story?

Ann Roth: I’m a huge researcher to the point where I have to say it’s too much. And so I read Katharine Graham’s book and I had met her a few times, and had dinner at Ben Bradlee’s house a few times over the years. I know where she went to school and what kind of life she had, and I know that when she was a young woman she probably went to Garfinckels (Washington D.C’s now-defunct fashion arbiter) and there was a lady there who would help her. I don’t think until after her husband died did she get into going up to New York, getting more social and she got hooked on Halston. But still, it wasn’t the day when somebody said, ‘what are you wearing?’ In those days, nice women did not talk about the labels in their dresses. 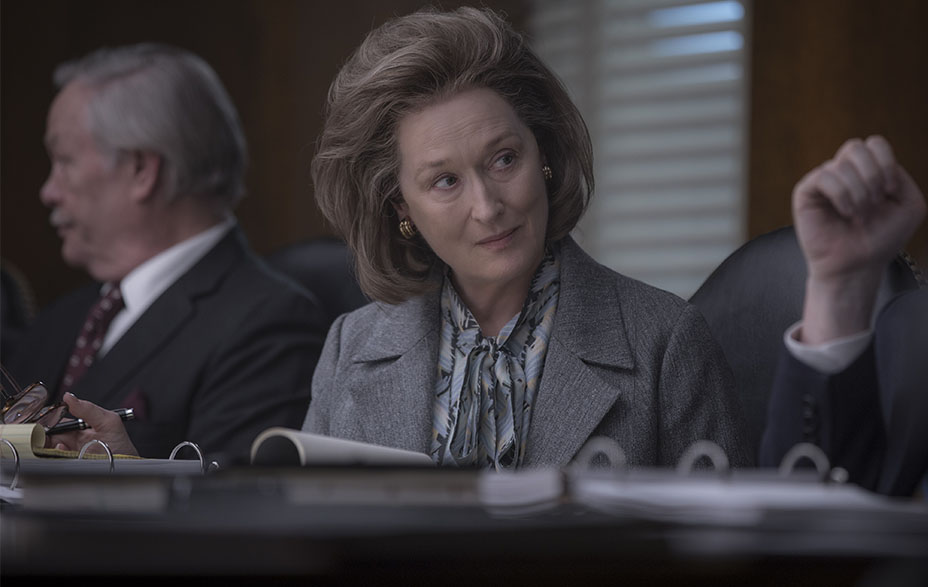 On her first day as publisher, Graham addresses a boardroom full of men while wearing a grayish skirt suit and a pussy bow blouse. Were you thinking about the pussy bow as the kind of political statement it became during the Trump campaign?

I’m afraid not, I’m not that smart. It’s funny about Katharine Graham’s clothes, I wanted them to be not that noticeable. When you look at that press room, you don’t notice how well dressed they are.

But you do notice what she wears because in most scenes she’s the only woman in the room!

That’s true, and I made every single stitch she wore. And yes, the clothes do follow a story arc. Meryl and I always do that. I had a feeling about Katharine’s clothes … she had a very normal life with her children and grandchildren, and I don’t think she did much besides go to the Post, go home and have dinner parties with friends. I think she went to bed and read the papers at night. But she had a lot of help in the house, a housekeeper, cook and driver. Liz Hilton, who is her secretary, worked for her well over 20 something years. At parties, Miss Hilton greeted guests but left immediately, that’s how people lived — by the rules of society. That’s why guys in the pressroom have ties on. There were rules but you didn’t voice them, that’s why she always wore stockings. Every woman wore stockings.

Now you can barely find them!

I know, the eggs are gone! 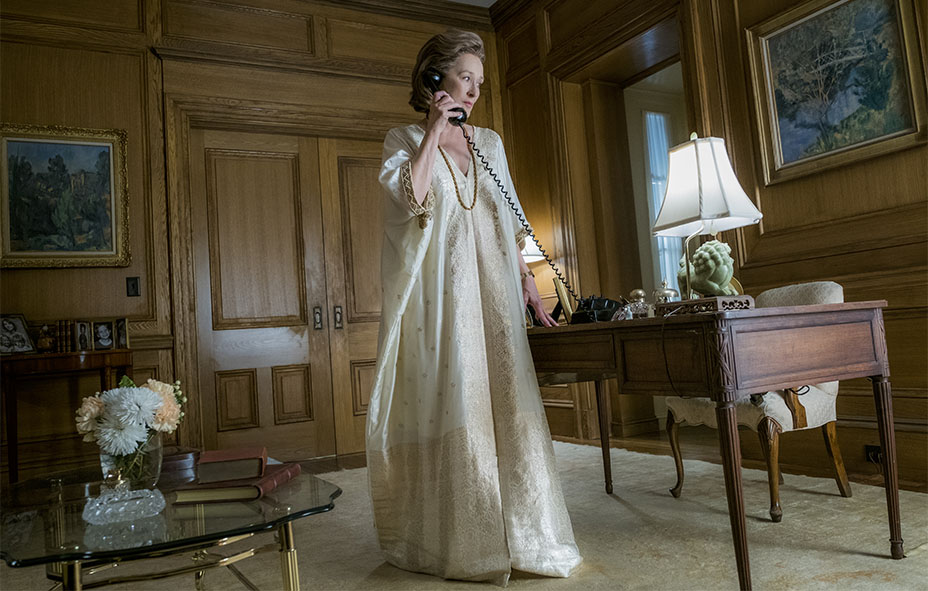 In one of the most pivotal scenes in the film, when she has to ultimately decide whether to publish the Pentagon Papers, she wears a caftan, which is just genius. She’s in a caftan in her dining room on the telephone after one of her dinner parties and is soon joined by a sea of men from the paper. She looks out of place but she’s actually the most powerful person in the room.

I got a text from an unknown person saying the caftan was the greatest thing they’d ever seen, but caftans aren’t that odd, they are everywhere. That was a nice fabric. I live in New York on Lexington Avenue and right up the street are all the great Indian shops, but I finally found that fabric in Edison, N.J. The caftan wasn’t based on real life, it’s just what I decided. We also found a great six-ply silk Gucci fabric for one of the dresses she wears; it’s hard to find good silks nowadays. 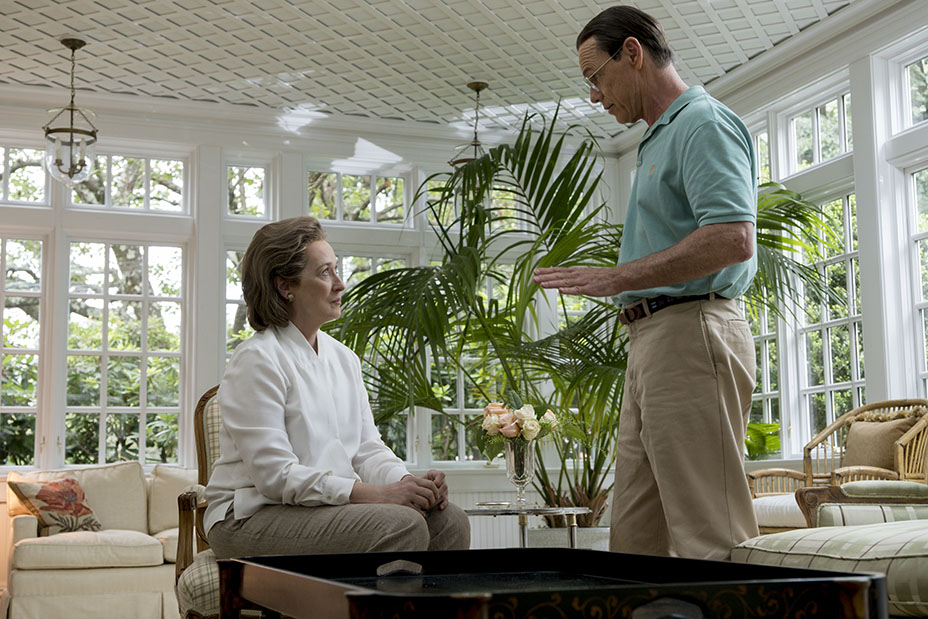 I was very struck by the clothing she wore to confront her friend, Secretary of Defense Robert McNamara, in his space, his home. She’s wearing a white shirt and black pants, and it’s almost an unsexing of her. You get the feeling she had been anguishing over this moment, right?

I think he had a big crush on her … the intrigue of this gang is like going into a rabbit hole.

I also noticed the Ralph Lauren polo pony shirt he was wearing, which really stuck out. Like he was part of this club that was screwing the American people!

At the end of the film, Graham looked more comfortable in her clothes, like she belonged in the newsroom. She wasn’t wearing a suit anymore, she was in shirtsleeves and a skirt. Was that part of the arc of her character?

And what about that 1970s-era Gucci fabric you mentioned? Where did you find that?

I’m one of those people who doesn’t divulge my sources!