Using historical data to predict the Oscars – an exercise I’ve undergone each of the past ten years – is ultimately a statement that the past is a decent predictor of the future. My model encompasses data from a number of critic circle awards, guild awards, and other sources, weighting each of them based on how well they’ve predicted each category in past years. All things considered, the model has done fairly well. Last year’s nominee predictions went 40/44, and last year’s award predictions went 17/21.

But what happens when the present is so strange as to look nothing like the past? Welcome to the weirdest year of Oscar prediction. From new eligibility rules to new BAFTA voting procedures to a new awards timeline to watching all movies at home, this will be an awards season unlike any other. Time will tell what that means for the reliability of any prediction system, but the tradition must live on: Here are my 2020 mathematical Oscar nominee predictions. 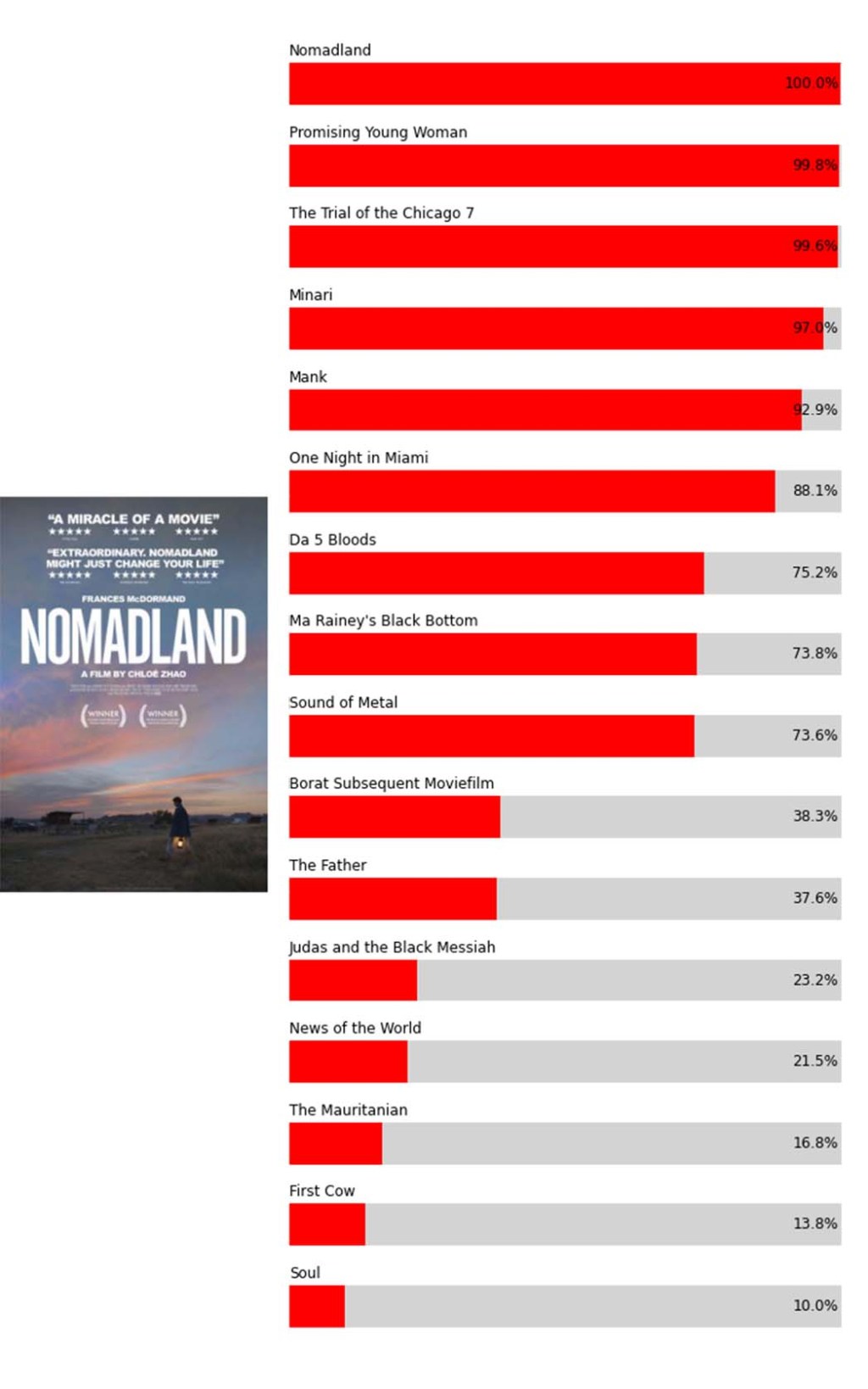 In many ways, these standings could serve not only as nominee predictions, but as a current state-of-the-race six weeks before the Oscars. Nomadland is in the lead for best picture, but it’s very likely to be competing against Promising Young Woman, The Trial of the Chicago 7, Minari, Mank, and One Night in Miami. Those six movies all have better than a 7-in-8 shot of making the cut. The second tier comprises Da 5 Bloods, Ma Rainey’s Black Bottom, and Sound of Metal. These three have a decent chance of getting nominated, though it’s far from guaranteed. And they’re going to need a really strong run in March and April to have a shot at hoisting the final trophy. No other movie is above 50 percent, but Borat Subsequent Moviefilm, The Father, Judas and the Black Messiah, and News of the World are the next most likely entrants. 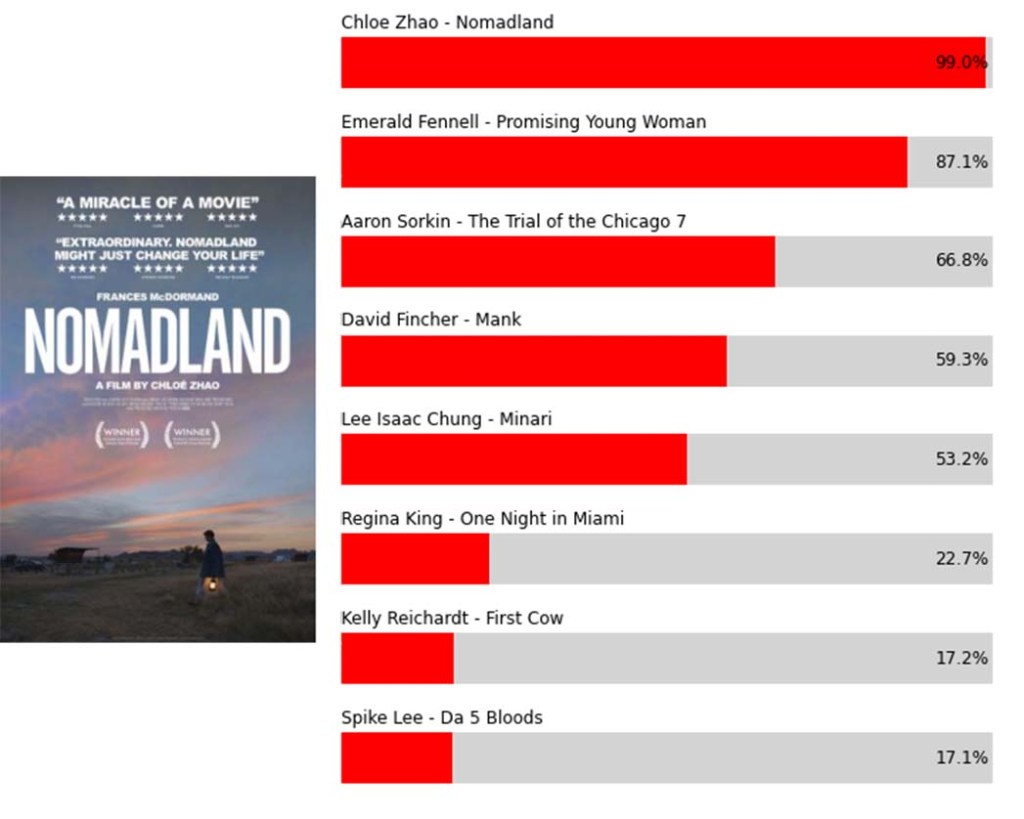 There’s only one lock for a best director nomination, and unsurprisingly, it’s the director of the best picture frontrunner. Chloe Zhao managed to blend professional actors with people playing themselves in the all-American story of Nomadland, and she’s the clear leader to win this category come April 25. The rest of the Directors Guild nominees claim the final four spots in the top 5: Emerald Fennell (Promising Young Woman), Aaron Sorkin (The Trial of the Chicago 7), David Fincher (Mank), and Lee Isaac Chung (Minari). But these four are not as much of a sure-thing as Zhao, which could leave room for one of Regina King (One Night in Miami), Kelly Reichardt (First Cow), or Spike Lee (Da 5 Bloods). 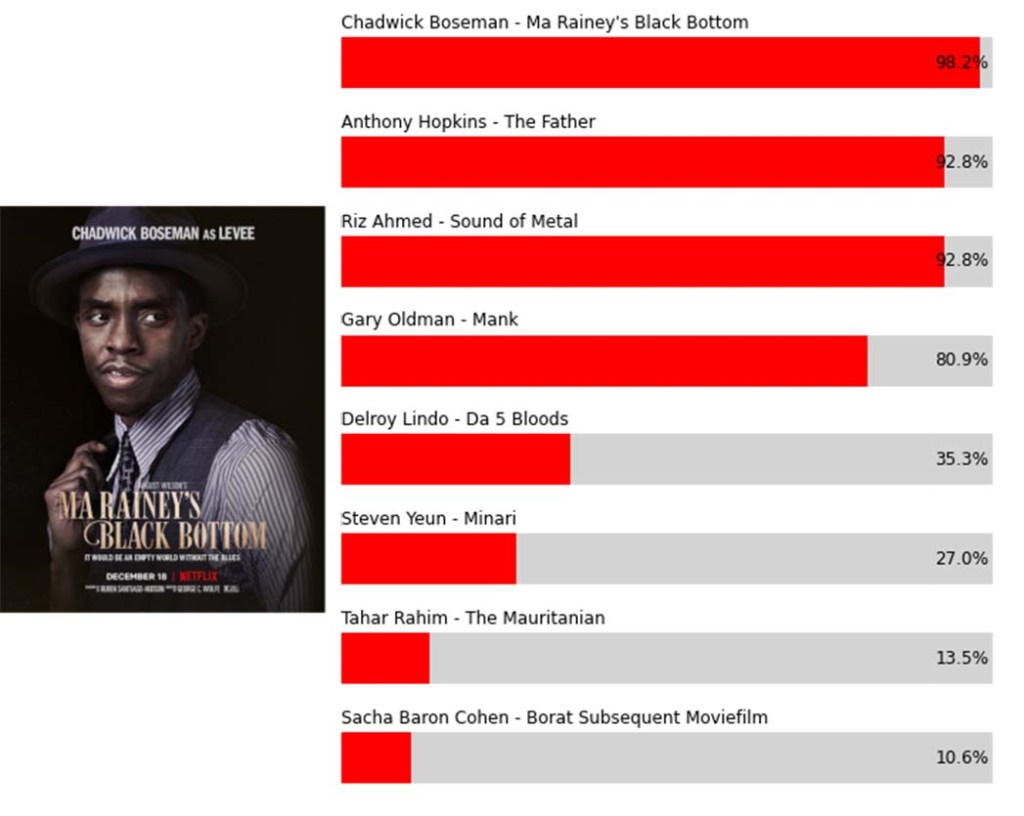 The late Chadwick Boseman ranks in not one but two categories – best actor for Ma Rainey’s Black Bottom and best supporting actor for Da 5 Bloods. But it’s in the lead category where he’s most likely to win a posthumous Oscar, potentially joining Peter Finch in Network as the only best actor winners to do so after their passing. Anthony Hopkins (The Father), Riz Ahmed (Sound of Metal), and Gary Oldman (Mank) should be setting their early alarms for Monday morning. But the fifth spot is very much up for grabs. 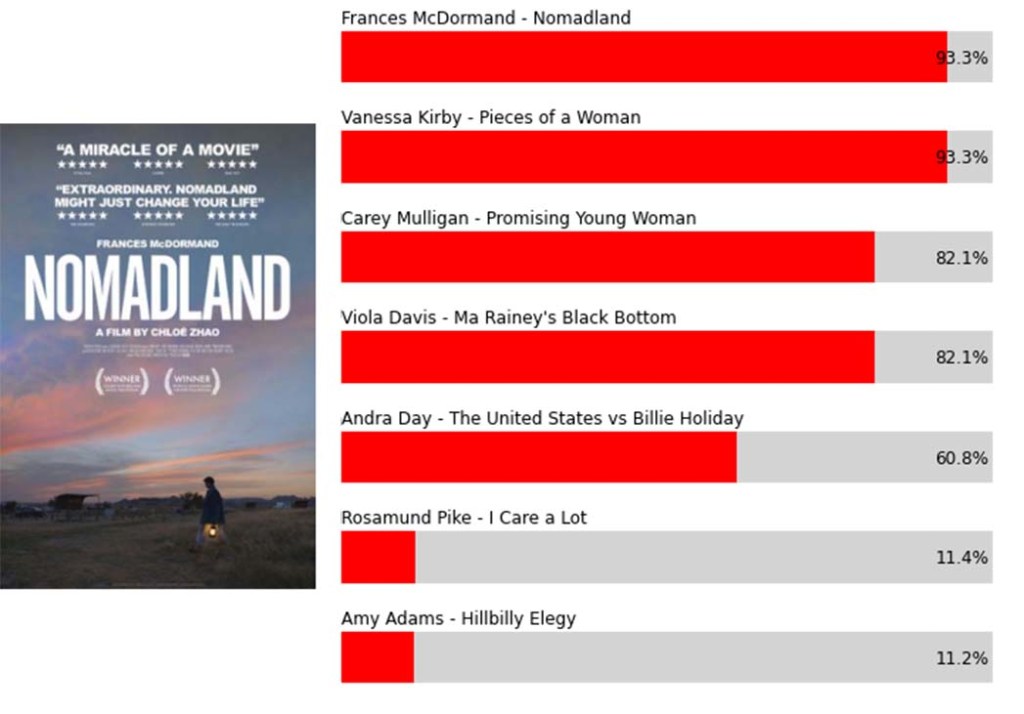 Frances McDormand (Nomadland) and Vanessa Kirby (Pieces of a Woman) received nominations from the Screen Actors Guild, BAFTAs, Golden Globes, and Critics Choice Awards. That’s good enough for a tie for first place. Carey Mulligan (Promising Young Woman) and Viola Davis (Ma Rainey’s Black Bottom) missed out on BAFTA nods, but aside from that anomaly they’ve been cruising through the early part of awards season. Andra Day (The United States vs Billie Holiday) can’t rest quite as easy, having missed out on a Screen Actor Guild nomination to Amy Adams (Hillbilly Elegy). That could leave room for Adams or Golden Globe comedy winner Rosamund Pike (I Care a Lot) to take Day’s spot on the shortlist. 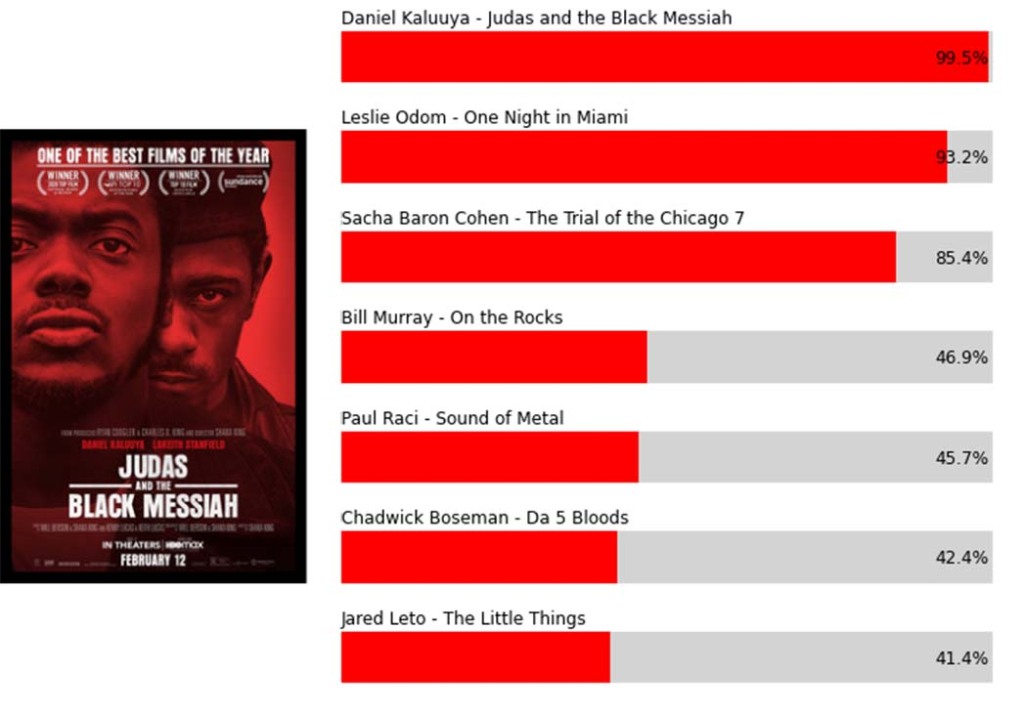 On the eve of nominations, best supporting actor is looking like a three-way race between Daniel Kaluuya (Judas and the Black Messiah), Leslie Odom Jr. (One Night in Miami), and Sacha Baron Cohen (The Trial of the Chicago 7). That leaves two spots, and no one has a better than 50-50 shot to take one of them. Golden Globe nominee Bill Murray (On the Rocks), BAFTA nominee Paul Raci (Sound of Metal), SAG nominee Chadwick Boseman (Da 5 Bloods), and Golden Globe/SAG nominee Jared Leto (The Little Things) can all stake their claim, but none of them have convincingly swept through awards season to prove that they’re a lock for a slot. And don’t be too surprised if the fifth nominee comes from outside this group entirely. 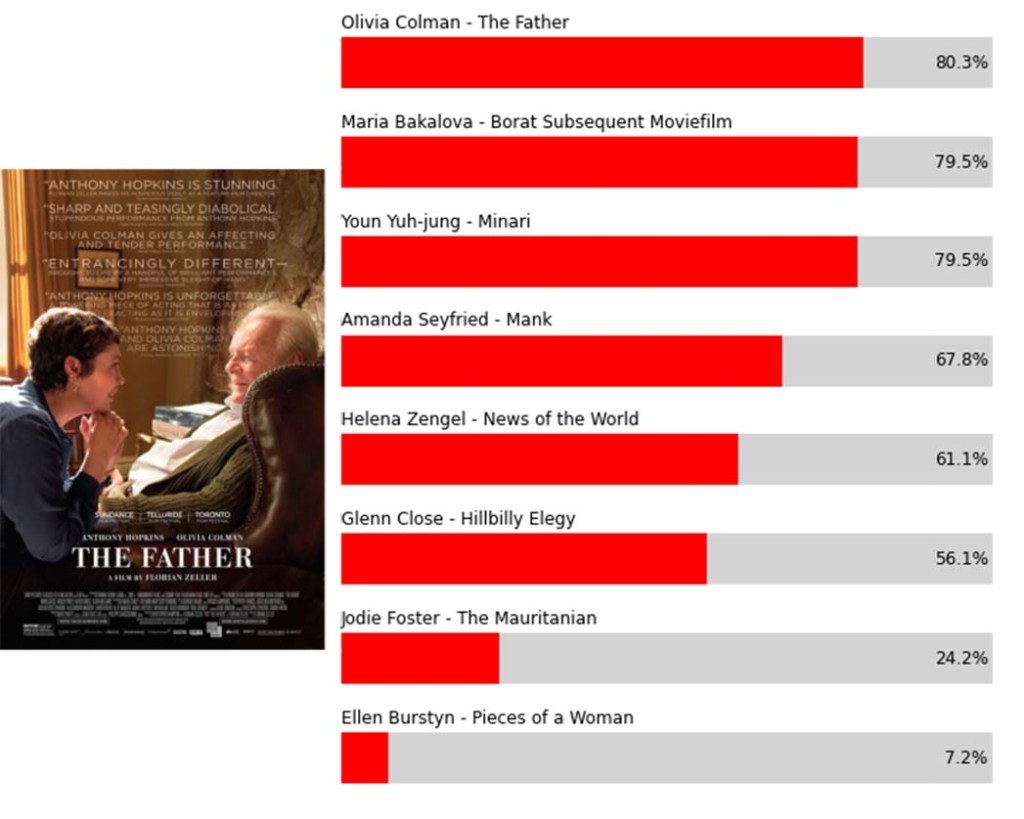 Only Mahershala Ali won two acting Oscars over the past ten years, but there are a number of candidates who could join him this year, including 2019 winner Olivia Colman. After winning the lead category for The Favourite, she’ll now look for a supporting win for The Father. But close behind her are Maria Bakalova (Borat Subsequent Moviefilm) and Youn Yuh-jung (Minari). The math says that the three most likely actresses for the final two spots are Amanda Seyfried (Mank), Helena Zengel (News of the World), and perennial contender Glenn Close (Hillbilly Elegy). Previous winners Jodie Foster (The Mauritanian) and Ellen Burstyn (Pieces of a Woman) are also in the running for this race. 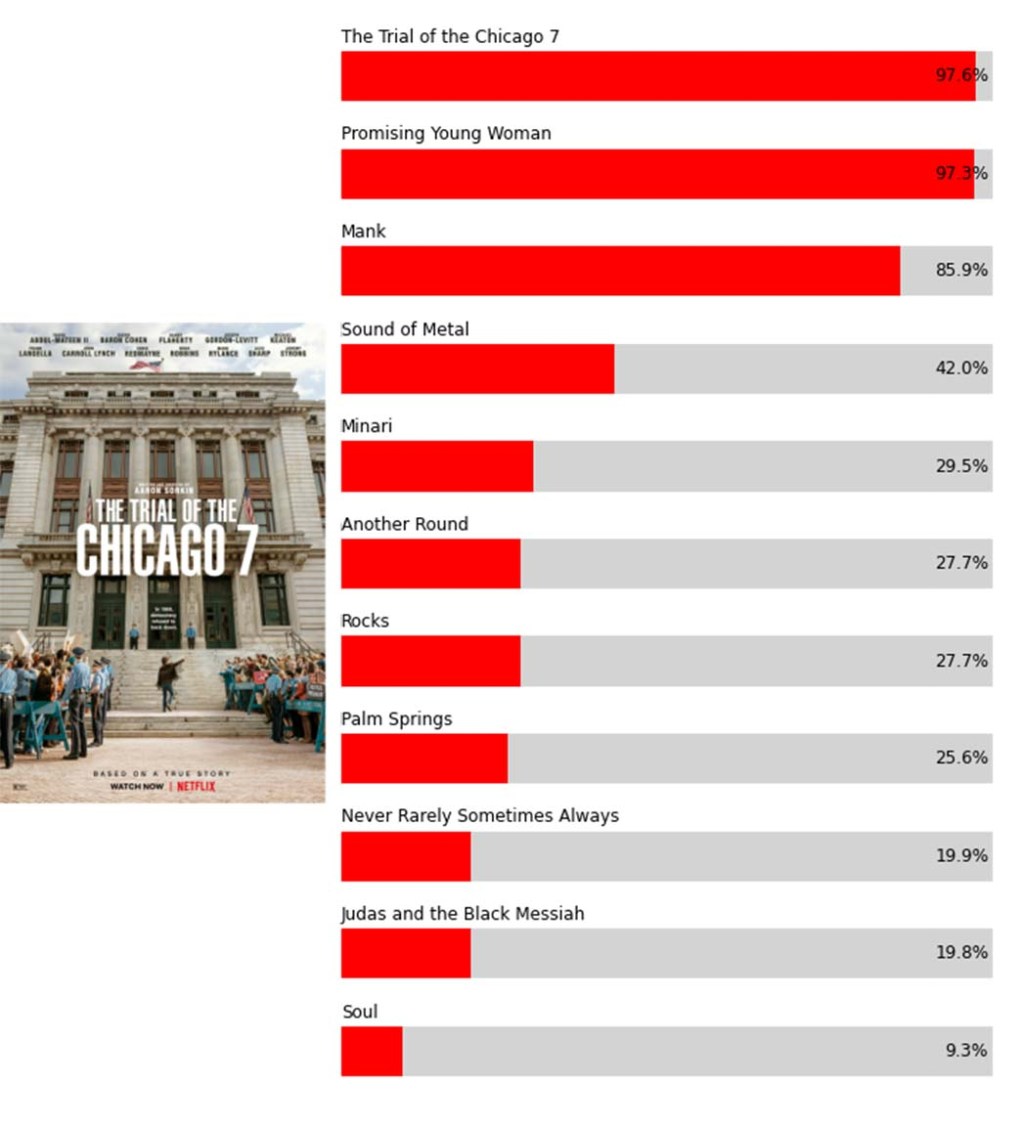 The top two couldn’t be more different. Aaron Sorkin (The Trial of the Chicago 7) is a three-time nominee and one-time winner for The Social Network. Chicago 7 is the sort of film Hollywood loves to make, and Sorkin brought a gripping true story to life while simultaneously making it relevant to the present day. Emerald Fennell (Promising Young Woman) is looking for her first nominations this year, and is doing so with a brilliantly original story that uses wit, horror, and grief to searingly condemn society’s treatment of women. Who will they be up against? Jack Fincher, nominated posthumously for his son’s movie Mank, is a likely bet. Darius & Abraham Marder (Sound of Metal) and Lee Isaac Chung (Minari) could easily be #4 and #5. From there, things get more unpredictable. The BAFTAs have done a good job in the past of predicting nominees in the screenplay categories, so their 2020 nominees do well on this list, but with the BAFTAs going to a new jury selection system this year, we’ll have to wait and see if they’re as correlated with the Oscars as in years past. 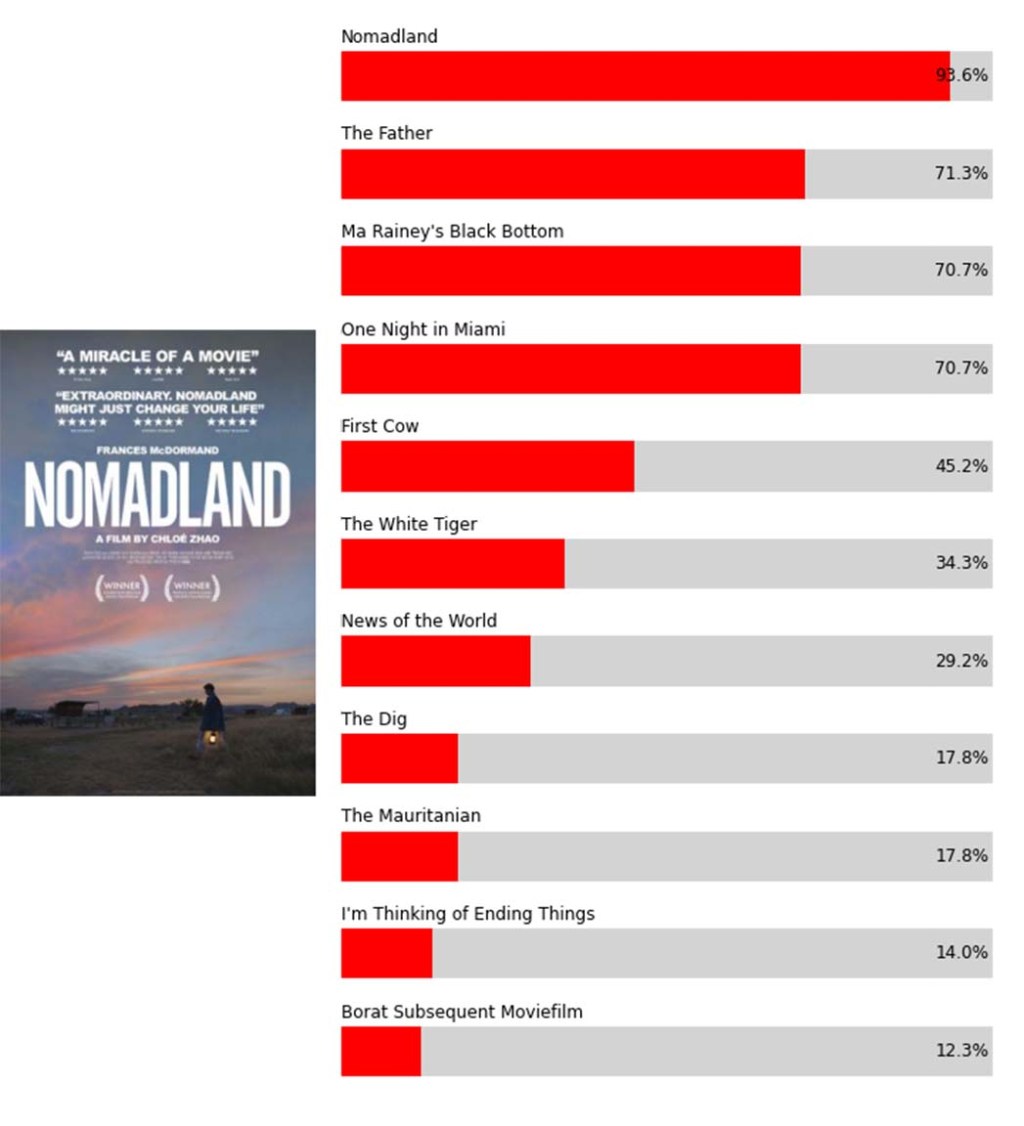 Chloe Zhao, also favored to win best picture and best director, tops the charts for best adapted screenplay. There’s a decent chance she’ll have to go through Florian Zeller/Christopher Hampton (The Father), Ruben Santiago-Hudson (Ma Rainey’s Black Bottom), and Kemp Powers (One Night in Miami) to get there. All other possibilities are below 50 percent, so at least one contender will emerge Monday morning with a delightful surprise. And indeed, that’s one of the great and terrible things about the Oscars – it’s a zero-sum game. For every upset – and surely, there will be upsets, especially in such a strange year – one nominee comes out behind, but the other is in for perhaps the happiest surprise of their life.

Ben Zauzmer is the author of Oscarmetrics: The Math Behind the Biggest Night in Hollywood.