End-of-the-’80s nostalgia rules at the Nederlander Theatre, where the cut-and-paste musical version of Garry Marshall’s 1990 romantic comedy, Pretty Woman, is re-creating the cultural-touchstone movie beat for beat, set to a score by Bryan Adams and songwriting partner Jim Vallance that could easily pass for vintage FM-radio pop-rock singles. Just as the film was a stellar vehicle for Julia Roberts, the musical showcases a radiant performance from Samantha Barks as the Hollywood Boulevard prostitute that becomes the “beck and call girl” of a corporate raider. True to the famous closing scene that launched a squillion swoons, he rescues her and “she rescues him right back.”

While the creative team strains a tad too diligently to give the female lead agency and sidestep the Cinderella story’s awkward sexual politics, the show is best appreciated as a retro pleasure, guilty or not, and robust box office in previews suggests that audiences are eager to succumb to its charms.

Sure, people will continue to take issue with its mixed message of female self-realization hitched to an inherently exploitative profession sugarcoated by ensuring that the sex worker remains in charge. And there’s something inescapably queasy about a woman perceived as low-class trash who gets her revenge against the snooty shopgirls that discriminate against her by flashing pricey merchandise purchased with the credit card of the rich guy paying for her services. But anyone looking to get lathered up over gender stereotypes is at the wrong show. Pretty Woman has always been a contemporary fairy tale about an emotionally lost prince as much in need of saving as the princess who struts into his life in patent-leather thigh-highs. It’s a romantic fantasy in which shopping and a high-end makeover are stepping-stones to deliverance, the ultimate success story of the aspirational ’80s.

Marshall first began developing a stage version in 2001 but it stalled until 2014, when he and the film’s screenwriter, J.F Lawton, began shopping the project to various composer-lyricists and theater directors, backed by producer Paula Wagner. In addition to Adams and Vallance, who brought proven songwriting skills that capture the era — the show is set in Hollywood, “Once Upon a Time in the 1980s” — director-choreographer Jerry Mitchell came on board, working on the musical with Marshall for more than a year before the latter’s death in 2016.

Much of the show plays like a scene-for-scene facsimile of the movie, right down to large chunks of dialogue and the iconic outfits worn by Barks as Vivian Ward, both pre- and post-cleanup. That means its chief reason to exist is as a nostalgia exercise, not a fresh entertainment in its own right. The songs are almost superfluous. But judging by the teary sighs, laughs and cheers of recognition, moist-eyed nostalgia appears to be exactly what the audience wants. 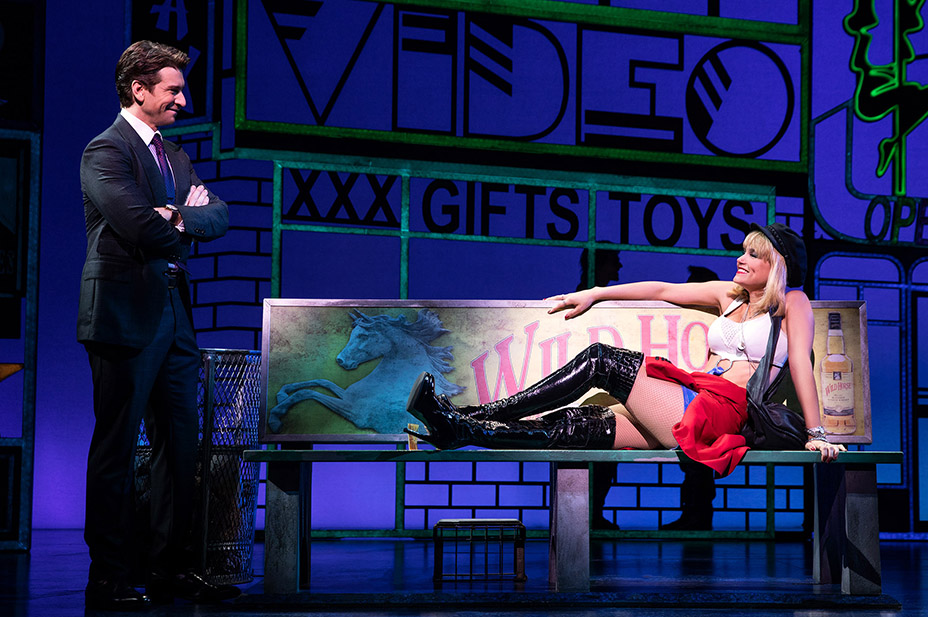 New York wheeler-dealer Edward Lewis (a dapper Andy Karl) is in Los Angeles to close a billion-dollar deal to buy up a vulnerable shipping company then break it down and sell off the assets. After he bumps into Vivian while seeking directions back to the Beverly Wilshire Hotel, he figures he’ll need a trouble-free companion for the intensive week he’s in town, locking in an all-inclusive fee much as he would any other transaction. But mutual feelings develop, strengthening Vivian’s resolve to steer herself onto a better life track and softening Edward’s ruthless business instincts, putting him in the unaccustomed position of wanting to help rather than devour his intended target.

The story is formulaic cotton candy, but the combination of warmly drawn characters with persuasive chemistry and fun fish-out-of-water elements that put a contemporary gloss on a transformation out of Pygmalion made the movie irresistible. The stage iteration is no different, getting you in Vivian’s corner by having her open up early about wanting to get out of prostitution.

The posters lining the theater lobby proclaiming, “Smart Woman,” “Strong Woman,” “Funny Woman,” “Fierce Woman,” “Bold Woman,” verge on Time’s Up overkill. But the slight adjustment that has Vivian capably defending herself from the aggressive advances of Edward’s slimeball lawyer Stuckey (Jason Danieley, unable to do much with a thankless part) makes her less dependent on the traditional chivalrous knight for protection. Even Vivian’s role as a positive influence for change in Edward has been fortified from the movie, making this a two-way exchange even if it incontrovertibly starts on unequal footing.

Barks, a Brit best known as Eponine in the Les Miserables film, makes a sensational Broadway debut. Her characterization is perhaps a tiny bit more sanitized than that of Roberts, what with the latter’s coltish physical command and intoxicating smile, but Barks brings pluckiness, grit, self-possession and sensitivity; she has a rich, expressive voice and strikes a lovely balance between the gangly tomboy and the graceful gazelle that helps sell the essential sense of a pure heart, untarnished by the degradations of the boulevard. You find yourself beaming with vicarious pleasure every time she emerges resplendent in some chic new outfit, re-created by costumer Gregg Barnes with a readily acknowledged debt to the movie.

That said, Vivian probably could have done without the blunt literalness of lyrics by Adams and Vallance like: “It’s true, I sold my body/ But I never sold my soul/ I’ve learned I don’t need anyone/ It’s me who’s in control.” All that is there in Barks’ captivating performance, without the need to spell it out.

Karl is one of Broadway’s most charismatic leading men; he sings and moves with confidence, and from the start shows glimpses of the tenderness toward Vivian that will gradually sneak up and catch him by surprise. But the male lead is definitely the second banana here, and Karl is perhaps inhibited from putting his distinctive stamp on the role by the distracting choice to have him do what’s pretty much an impersonation of composer Adams’ signature raspy vocal style. This is most unfortunate in the classic opera scene — The red dress! The necklace! The snap-shut joke with the jewelry case! — when Edward cuts into snippets from Verdi’s La Traviata with “You and I,” in which he croons, “Darlin’ you look beautiful tonight/ I can’t remember ever seeing anything so right.” It’s not quite as cheesy as some of Adams’ more syrupy ballads (the Barbra Streisand duet, “I Finally Found Someone,” tops that list), but it’s close.

Most of the songs, however, are tunefully easy on the ear and skillful enough at exploring the characters’ feelings. The best are Vivian and Edward’s respective establishing numbers, “Anywhere But Here” and “Something About Her,” as well as Vivian’s melancholy confessional “This Is My Life.” All have been given appealingly mellow ’80s-style instrumentation from orchestrator Will Van Dyke, often enhanced by a gentle country flavor. 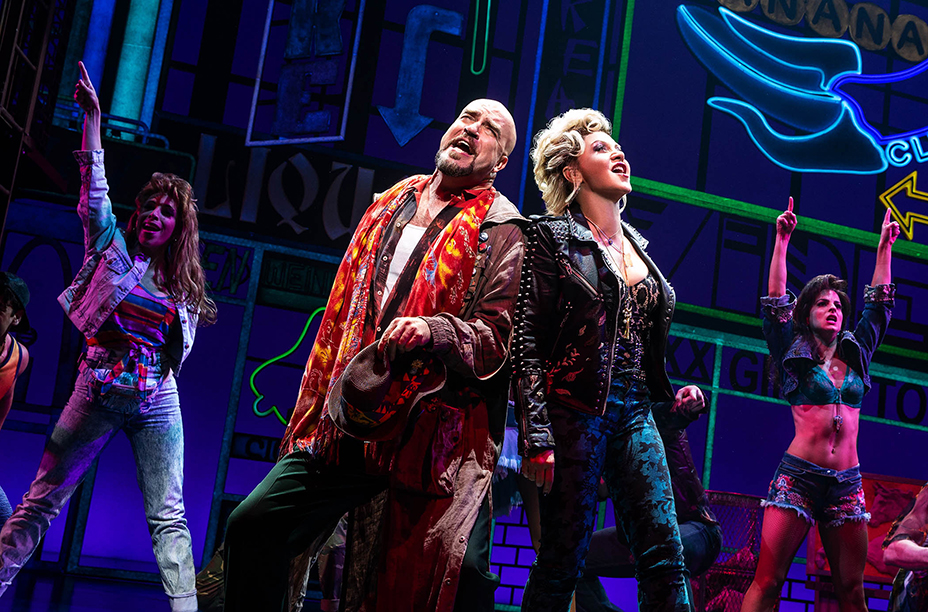 Some of the splashier numbers go to the chief scene-stealer in the cast, Eric Anderson, who multitasks with amiable assurance as the “Happy Man,” a colorfully dressed street hustler hawking maps to the stars’ homes on Hollywood Boulevard; the Beverly Wilshire manager Mr. Thompson, who becomes a kind of fairy godfather to Vivian’s Cinderella (the priceless Hector Elizondo in the movie); and a nightclub singer. Those personae effectively merge in the segue from “On a Night Like Tonight” into “Don’t Forget to Dance,” a sequence that is more or less this show’s counterpart to the Embassy Ball in My Fair Lady.

Mitchell’s choreography in that scene, blending elegant ballroom with Vivian’s contagiously explosive gyrations, is more enjoyable than in the brassy “Rodeo Drive.” That celebration of ’80s extravagance just comes off as loud and vulgar, with too little to distinguish the preening fashionistas’ moves from those of the sashaying hookers earlier. Maybe that’s the point? In any case, it doesn’t help that Barnes has outfitted the male chorus here like S&M Versace mannequins.

The song is saved somewhat by the powerhouse lungs and large personality to match of Orfeh as Vivian’s friend and protector Kit De Luca, leaning hard into the stereotypical seasoned hooker with the heart of gold. The most notable departure here from the film script is the chosen career path for Kit’s possible exit out of prostitution. A number of the affectionate sisterhood scenes between Vivian and Kit are shared with gusto by Tommy Bracco, a diminutive but dynamic mover who plays an amusingly curious hotel bellhop as well as participating in the ensemble dance numbers in various guises.

Of those numbers, the biggest miss is the second-act opener, “Welcome to Our World (More Champagne),” a parade of noxious rich folks toasting their fabulousness, which lacks the wit or visual panache of another corresponding My Fair Lady set piece, “The Ascot Gavotte.” Class differences are an integral part of the story, but hitting them on the nose like this with a polo mallet just seems stale.

Working on David Rockwell’s versatile architectural set design — complete with the requisite fire escape and ornate Beverly Wilshire entrance — Mitchell moves the story along at a sustained pace if not a great deal of imagination. He gives the intimate scenes room to breathe and allows Vivian’s moments of triumph or joy, large or small, to resonate, encouraging us to participate directly in her breakthroughs, setbacks and resilient self-determination. If the absence is felt of one indelible part of the movie, Roy Orbison’s “Oh Pretty Woman” (a rights issue or a choice?), the essence of what made it such a hit survives in Barks’ winning performance.