There’s arguably no 20th-century American dramatist whose plays remain more socially relevant than Arthur Miller. While The Price doesn’t rank in the top tier of his body of work, it makes still-trenchant observations on the way we use money and success to define ourselves, often at the expense of family obligation or personal integrity. The meaty 1968 play also takes a sharp analytical scalpel to the obsessive national categorization of winners and perceived failures, bringing psychological complexity to characters on both sides of that divide. Bolstered by a first-rate cast, director Terry Kinney’s carefully considered production for Roundabout Theatre Company shapes all sides of the arguments into compelling drama.

Derek McLane’s handsomely descriptive set communicates instantly that the play deals with the consequences of the past, when decisions were made that forged the trajectory of multiple lives. The action takes place in a disused apartment, but the contents obviously belonged to a family who once had considerable means. The room is stacked with antique furniture, from radio and gramophone consoles to cabinets, massive dressers, an enormous dining table and a vintage concert harp. The setting, exquisitely lit by David Weiner, is both realistic and abstract; mahogany pieces are suspended from the ceiling, like the literal weight of memories, while the open walls reveal a brooding sky outside and a ring of old New York City water towers.

Police sergeant Victor Franz (Mark Ruffalo) enters and begins removing the dust cloths that cover all this furniture, and the mix of fondness and discomfort that plays across his face suggests his complicated relationship to the past. He’s returned after a long absence to have the contents appraised and sold before the building is torn down. His wife Esther (Jessica Hecht), who might have a minor drinking problem, has indulged on the way there, probably to take the edge off when re-entering a place with depressing associations.

The two actors swiftly convey the familiar body language and conversational give-and-take of husband and wife, with humor and affection as well as impatience. But while they share money worries, they come at that issue from different angles. Vic seems firm about splitting the proceeds of the sale with his estranged brother, as a matter of principle, while Esther, slightly buzzed and prone to making blunt statements, points out that the “moral debt” her husband is owed means he should keep the full amount. She’s counting on the cash to give them a fresh start.

Volunteering to pick up Vic’s suit from the cleaners for a rare dinner-and-a-movie date they have planned for later, Esther makes it plain she finds his uniform an embarrassing advertisement of their social status. She also nudges him about having reached retirement age from the force (he’s about to turn 50), insisting it’s time he quit to pursue something more gratifying. But Vic’s shuffling nervousness conveys his limited outlook for a midlife career change. Being an honest cop has kept him from rising far in the ranks, not to mention exiled him to a “Siberia” beat out by the airports. In Ruffalo’s downcast, defensive characterization, Vic seems to accept this as his fate.

Into this air thick with past burdens and present anxieties shuffles Gregory Solomon (Danny DeVito), preceded by an epic cough. A Russian Jewish immigrant pushing 90, he’s mostly retired from the used furniture trade, admitting that Vic must have found his name in a very old telephone book. DeVito blows an invigorating gust of playful comedy, both physical and verbal, into Solomon’s wily manipulation of his client. He goes back and forth on whether he can take on such a big job, dancing evasive circles around Vic’s insistence that he name a price.

Slapping the heavy dining table with one hand while assessing its depreciated worth, DeVito amusingly articulates Miller’s take on America’s changing values in the late ‘60s, moving away from permanence to become an acquisitive society of disposable goods and relationships. “You can’t move it,” Solomon says. “A man sits down to such a table he knows not only he’s married, he’s got to stay married — there is no more possibilities.” 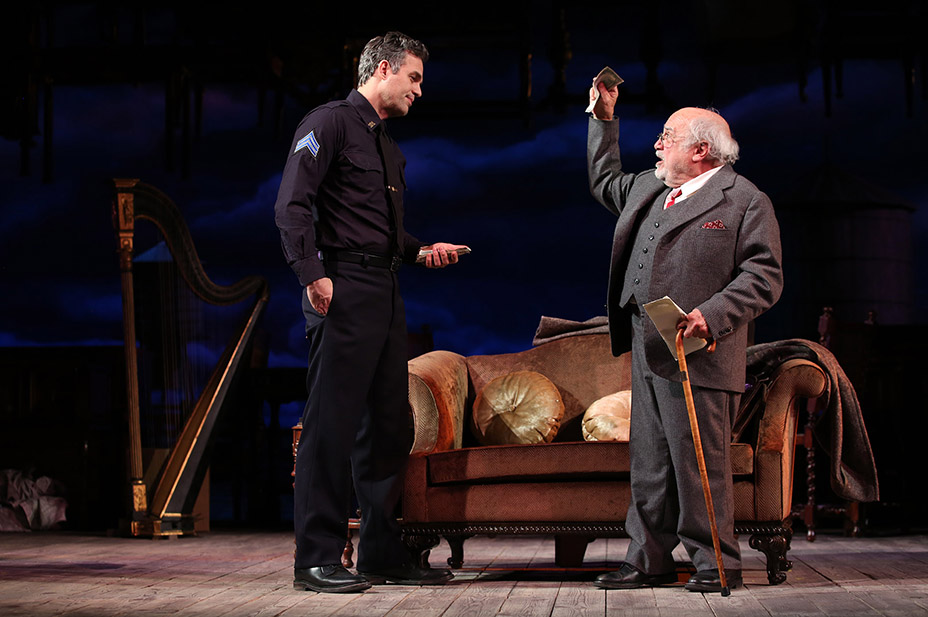 The negotiation is interrupted by the unexpected arrival of Walter (Tony Shalhoub), the brother with whom Vic hasn’t spoken since their father died 16 years ago. A successful surgeon dressed in an impeccable suit, Walter behaves as if nothing had soured between them. He’s patronizing but cautious with Vic; curt with Solomon, accusing the old man of trying to rob them blind; and charming with Esther when she returns, her resentment of him tempered by her susceptibility to his flattery. She’s eager to take Walter’s show of good will at face value, whereas Vic refuses.

The bad blood between the brothers was caused by Walter going off during the Depression to complete his studies and pursue medicine, forcing Vic to abandon his promising academic path in science and take care of their aged father, after he was wiped out in the 1929 crash. But Walter says his defeatist brother made that sacrifice of his own volition, while Vic insists he had no choice.

How the brothers became such different men — they even speak like they belong to different classes — is the conflict that fuels Miller’s key dialectic here. One is the dutiful son who shouldered familial responsibility while the other seemingly shrugged it off to chase success. It’s mirrored also in their professions — the thankless man of order vs. the self-centered doctor, his desire to cure the sick inseparable from his hunger for personal glory. But the writing is far from black and white on either side, allowing for some animated back and forth as the physical remnants of the brothers’ youth freshen the sting of betrayal.

However, in the fractious second act, Miller’s play shows its dramaturgical weaknesses, becoming circuitous and repetitive as each brother states and restates his point of view — Vic bitter and accusatory, Walter alternating between self-righteousness and regret — with interjections of attempted reasoning from Esther and opportunistic wheedling mixed with wry wisdom from Solomon. The plotting also has its contrivances — key financial information kept from Victor by his debilitated father that remains unknown to him even after the old man’s death; major setbacks in Walter’s life of which Vic and Esther have heard nothing.

Still, the strong cast ensures that the drama remains riveting. The irreconcilable nature of the clash yields a poignant conclusion as mutual understanding and forgiveness are revealed to be beyond the brothers, leaving Vic to contemplate the price of his sacrifice. Though Kinney perhaps pushes the pathos a little hard by filtering in gentle harp music (the siblings’ mother was a musician who made her own sacrifices) over the closing scenes.

Ruffalo stepped into the production after original lead John Turturro withdrew due to scheduling conflicts. The soulful actor’s mumbling delivery in the early scenes suggests Vic has internalized his disappointments and his failure to give Esther the life she wants. But the performance acquires power throughout the steady build to an explosive crescendo of anger, hurt and fresh self-doubt after Walter realigns the family dynamics. Hecht is superb in a role torn between spousal loyalty and corrosive agitation. And Shalhoub shifts with grace from smug condescension to brutal honesty, easing into Walter’s version of atonement, which will never be what Vic needs.

Making his Broadway debut as one of Miller’s rare comic creations, DeVito is marvelous. His accent is inconsistent, but his spry characterization expertly leavens the mood when needed, injecting mischief without slipping into caricature. His shtick with a boiled egg is irresistible, and his diminutive height makes for an uproarious sight gag when he’s left holding a competitive rowing oar.

Continuing Roundabout’s long history with Miller’s work, this is a very solid, sensitively directed production of a flawed but rewarding play. It’s no Death of a Salesman, but it still has much to say about capitalism and its costs to the striving American family.