Stripped right back to its bones in David Harrower’s finely fileted text, cut from Muriel Spark’s 1961 novel, the Donmar Warehouse’s new production of The Prime of Miss Jean Brodie offers an acid-etched portrait of a poisonous narcissist in a position of power with dangerous sympathies for fascist, totalitarian regimes. Sound familiar? Although set, like its source material, in the 1930s, the text resonates with issues relevant today, particularly as it touches on how easily plastic young minds can be misshaped by the twisted desires and ambitions of adults.

Lia Williams’ vivid lead performance in the title role — all jutting angles; Morningside vowels; and just a faint tremor in the hands, like she’s been nipping at the sherry just a wee bit too much — offers a finely shaded portrait of one of 20th century British fiction’s most compelling characters. However, the way the raw narrative material has been sculpted by Harrower (who wrote Blackbird and that play’s film adaptation, Una) and director Polly Findlay (last year’s National Theatre-to-West End transfer Beginning) means the play ends up emphasizing Brodie’s corrosive manipulativeness and far-right sympathies more than other renditions of the story.

This time around, Miss Brodie is no quirky-cute, epithet-scattering spinster about whom someone like Rod McKuen (“Jean, Jean/You’re young and alive!”) might write a wistful love song, as he did for the iconic 1969 film adaptation of the book that earned Maggie Smith her first Oscar in the lead role.

In the Donmar’s intimate auditorium, where seating surrounds three sides of the stage, the set offers a bare expanse in which the cast rearranges old-fashioned school chairs and just a handful of other props as required. The back wall is left largely blank, broken into granite-colored cells like a mausoleum for cremains, an impression reinforced further when sconces are filled with bouquets of flowers. Those memorialized include the Great War’s slain, among them Jean’s unlucky fiance, Hugh, and those who will die within the action of the play — both characters we meet and those killed by fascists in World War II and the Spanish Civil War.

Essentially, the story shifts back and forth between two different time frames. One starts in about 1934, when Sandy Stranger (Rona Morison) and her 11-year-old coevals first meet their form teacher Miss Brodie at the Marcia Blaine School for Girls (modeled on Spark’s Edinburgh alma mater), and then tracks them up until their senior year. 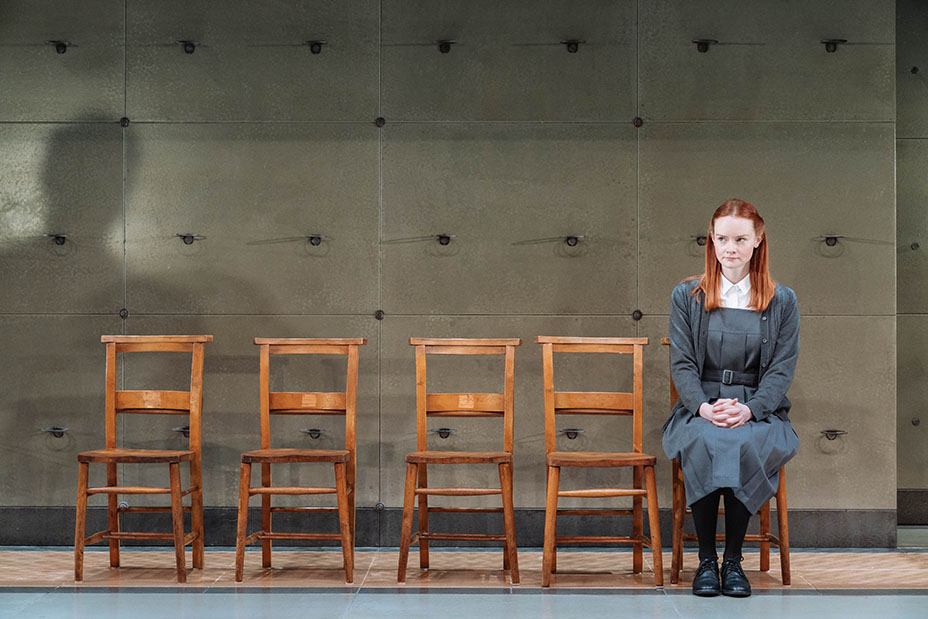 In the second time frame, Sandy is interviewed by an inquisitive young reporter (lanky Kit Young, recently seen at the Bridge in Julius Caesar) from the Scotsman about her treatise, an intriguing work touching on morality and metaphysics titled The Transformation of the Commonplace, a monograph that is being published just before Sandy, now a Catholic convert, takes the vow and becomes a nun.

Harrower’s adaptation honors with impressive skill Spark’s knack for calculated time shifts, one of the hallmarks of her work. When it came to the deployment of literary “flash-forwards” and changes in tense, Spark was masterful, and could douse the light comedy of a story with sentences sharp as a stiletto, ice cold with tragedy foretold.

See, for example, the way she reveals just a few pages into The Driver’s Seat that the protagonist of that novella will be murdered, or the passing mention here of the disappointing fates awaiting each of Jean Brodie’s specially chosen girls. Poor Mary’s slowness and tendency to dash about in a panic will be her undoing in a fire a few years hence from the main action. That fact, once casually revealed, adds a hair-raising resonance to the way Emma Hindle’s younger version of Mary dithers about onstage, foreshadowing the character’s death.

Playing the real moral fulcrum of the narrative in Sandy, Morison in some ways has a trickier role to work with than Williams. She must embody Sandy as a gauche but watchful girl of 11 (others accuse her throughout of “staring” too much, and Brodie jokes that she’ll make a great spy someday). Then in an instant she must incarnate Sandy years later in conversation with the reporter, her spartan gray school uniform doing double service as a novitiate’s plain habit. Morison makes the transitions effortless. She projects an intense charisma even if here she’s made up to look plainer than others.

That goes particularly for Helena Wilson’s Jenny, the girl Brodie tries to pimp out effectively to Teddy Lloyd, the one-armed art teacher who is in love with Brodie. The joke there is that Lloyd (Edward MacLiam) finds that no matter how hard he tries, his portrait of Jenny always ends up looking ineluctably like Jean Brodie. But on another level, it’s Sandy and Jean, Morison and Williams, who resemble each other with their matching red hair, whippet-thin figures and features that are more striking than pretty.

Good casting and styling draws out how entwined these two characters are, caught in a strange pas de deux of mind games and betrayal, in itself a very contemporary, postfeminist spin on material that keeps making itself relevant to new generations.