Continue to The Hollywood Reporter SKIP AD
You will be redirected back to your article in seconds
Skip to main content
August 24, 2017 5:30pm

Imagine simultaneous revivals of a dozen or so of the standout musical productions of the latter half of the 20th century. That’s more or less what Prince of Broadway crams into two-and-a-half hours, in sample-size nuggets that touch on the magic while leaving you craving more. Sifting through such an embarrassment of riches, it’s inevitable that certain choices and omissions appear questionable, and the nine performers that make up the tremendously versatile and hard-working ensemble are a better fit for some roles than others. But this recap of an illustrious career leaves no doubt about the validity of producer-director Harold Prince’s exalted status, even if it’s thin on illuminating detail.

Unlike such revues as Fosse or Jerome Robbins’ Broadway, based around the work of leading dance innovators, Prince of Broadway faces the challenge of binding the disparate threads of an astonishingly diverse body of work. That output has included early successes like the Eisenhower-era Adler and Ross hits The Pajama Game and Damn Yankees; Bock and Harnick classics She Loves Me and Fiddler on the Roof; Kander and Ebb at their incomparable best in Cabaret; a legendary collaborative streak with Stephen Sondheim that yielded Company, Follies, A Little Night Music and Sweeney Todd, among others; and the Andrew Lloyd Webber blockbusters Evita and The Phantom of the Opera. But the best of Prince’s shows function as a seamless unit of conceptual cohesion, so lifting iconic numbers out of context inevitably dilutes their impact.

Perhaps the closest anthology of this kind in recent memory was Sondheim on Sondheim. That 2010 show attempted to stitch a throughline by using filmed interview segments with the composer-lyricist, though its cruise-ship cabaret assembly was so workmanlike that even top-drawer performers like Barbara Cook couldn’t elevate it beyond isolated standout moments.

What buoys Prince of Broadway — far more than the flimsy, intermittent linking narration, written by David Thompson and delivered by the cast as Prince stand-ins — is the polished presentation and elaborate design elements. But even more so it’s the depth of characterization achieved by the performers. Rather than just stepping in to do a number or two, the actors have clearly worked with Prince and co-director Susan Stroman to shape rounded characters — so much so that you often find yourself wishing for the same casting in full productions. The performers work from existing models but are given room to bring something fresh to the roles, and everyone gets at least one or two chances to shine. 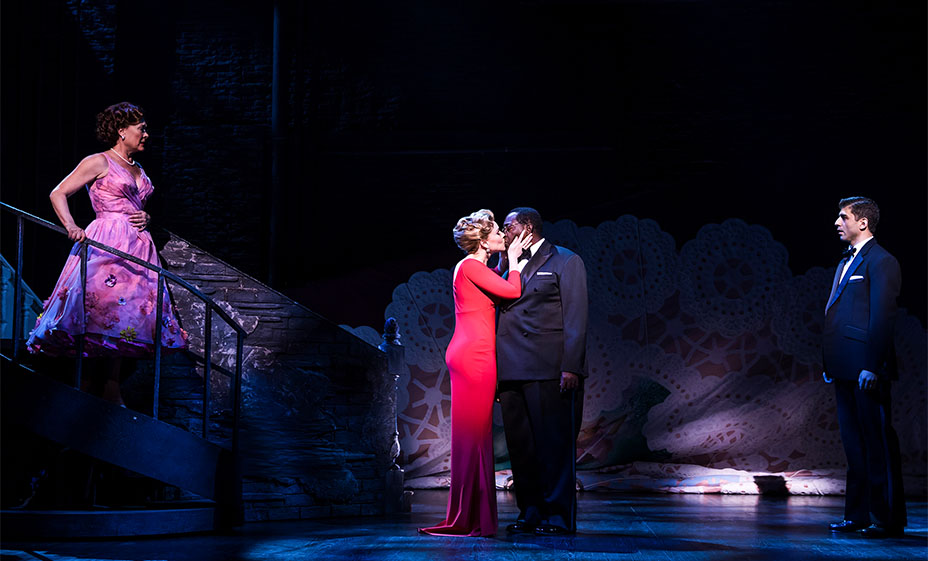 Prime examples include the superb triple-threat Tony Yazbeck as his namesake romantic lead in West Side Story, fetchingly matched with Kaley Ann Voorhees’ crystalline soprano as Maria; Karen Ziemba as an endearing Mrs. Lovett, balancing cheerful amorality with tender longing opposite Chuck Cooper’s chillingly obsessed demon barber in Sweeney Todd; the chameleonic Brandon Uranowitz, hilariously dizzy with romantic possibility as George in She Loves Me, or deliciously louche as the Emcee in Cabaret; Emily Skinner oozing jagged disdain as boozy Joanne, swilling her way through “Ladies Who Lunch” from Company; or the appealing spark-plug Janet Dacal, tearing it up with charismatic command in the title role of Evita or simmering with dangerous allure as Aurora in Kiss of the Spider Woman.

Arguably the best example of the ensemble’s surgical attention to character comes in the sizeable chunk devoted to Follies. Even before the performers open their mouths to speak or sing, anyone familiar with that monumentally rueful show about roads traveled and untraveled will recognize Yazbeck as Buddy, Ziemba as Sally, Cooper as Ben and Skinner as Phyllis. It seems a crime not to get to hear Ziemba sing Sally’s torchy confession, “Losing My Mind.” But by way of compensation we get Yazbeck’s shattering take on “The Right Girl,” a schizoid ricochet between romantic ecstasy and agony in which philandering Buddy’s torn loyalties are amplified by an emotionally charged physical expression of his dilemma — a virtuoso extended tap solo that makes you sweat just watching.

Some of the pairings of performer and part are unexpected. The classic handsomeness of Michael Xavier, with his imposing height and the chiseled jaw of an astronaut, oddly makes his interpretation of “Being Alive” from Company, the ultimate song of emotional vulnerability and need, quite affecting. And having African-American performers take on traditionally white roles switches up the dynamic, notably with Bryonha Marie Parham as Sally Bowles, steadily cranking up her big-belt voice through the title song from Cabaret and building to a powerhouse finish in front of a cascading silver Mylar curtain. But while Cooper brings outsize lust for life to Tevye in “If I Were a Rich Man,” that exuberant number seems inadequate as the sole representation of a musical with the pathos of Fiddler. 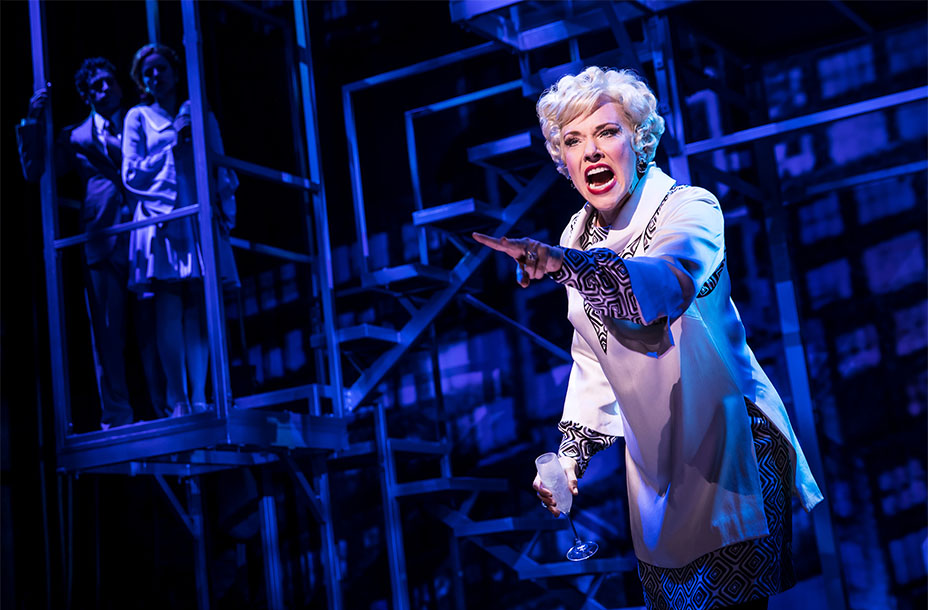 Cooper and Parham lead a more satisfying nod to Prince’s 1994 production of Show Boat, one of his rare revivals. Any reminder of that musical classic, with its bold-for-its-time treatment of race issues in the segregated South, resonates strongly in the wake of the recent Charlottesville disgrace. And the numbers chosen here offer a taste both of the drama’s soulfulness, in Cooper’s stirring “Ol’ Man River,” and its portrait of spiritual resilience, in Parham’s earthy, infectiously joyful “Can’t Help Lovin’ Dat Man.” If Parham is an imperfect fit for Amalia in She Loves Me, the performer makes up for it elsewhere.

Among the disappointments, I found the section on A Little Night Music a wan excursion into that ineffably delicate show, with Xavier mugging through “You Must Meet My Wife” and Skinner finding few new colors in “Send in the Clowns.” Obvious choices like that one are often less memorable than the more under-exposed songs.

For instance, few people will think of Fraulein Schneider’s song of resignation “So What?” as a high point of Cabaret, but Ziemba makes it a heartbreaker. Skinner brings punchy feeling to “Now You Know” from Merrily We Roll Along, one of the rare times a song directly echoes the linking narration in its examination of the hard knocks of failure. And the acknowledgment of flops among the successes allows for Dacal to breathe sexy, take-charge attitude into “You’ve Got Possibilities,” a peppy number from the short-lived 1966 show It’s a Bird… It’s a Plane… It’s Superman, in which Daily Planet staffer Sydney tries to uncover the hunk in Xavier’s Clark Kent. 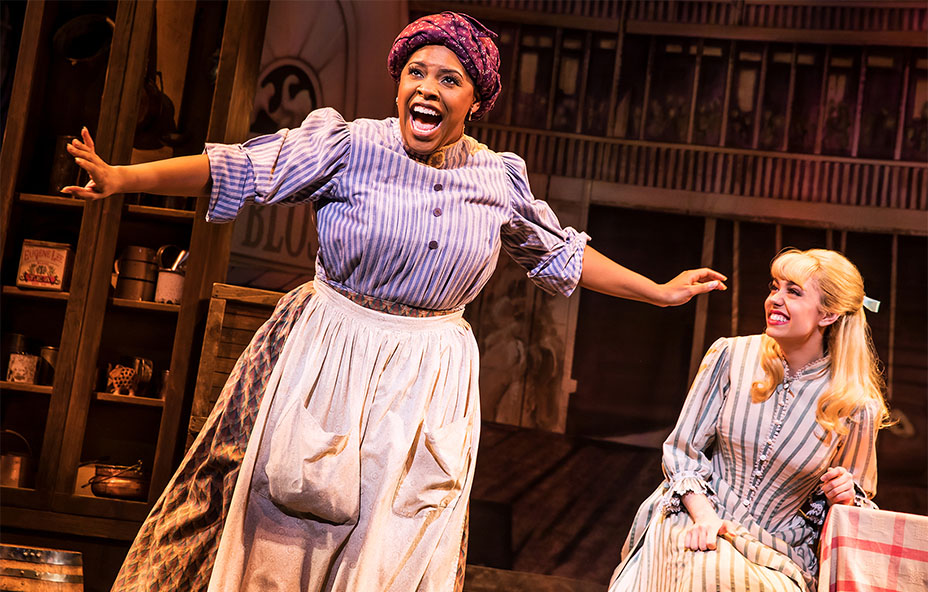 The song is performed in front of a Roy Lichtenstein-style pixel-art panel, an example of the resourceful work of designer Beowulf Boritt in conjuring distinct settings for each musical referenced. Those include a Ziegfeld-esque confection to usher in the “Beautiful Girls” of Follies; a scaffold apartment block for Company; New York fire escapes for West Side Story; a mini pie shop for Sweeney Todd; a glittering web for Kiss of the Spider Woman; and a candlelit, subterranean lair for Phantom of the Opera. That latter interlude also illustrates orchestrator-arranger Jason Robert Brown’s smart decision to honor original period sounds — cheesy ’80s guitars and electric violins wail through the title song as Xavier and Voorhees embrace the material’s gothic-melodrama excesses and the fog machine goes crazy.

Starting from a bare stage with a ghost light, the design mix of physical sets with old-fashioned painted backcloths and projections works effectively. The sharp look carries over into Howell Binkley’s evocative lighting and William Ivey Long’s staggering array of character-defining costumes. Parham’s beaded shimmy dress for Cabaret is a particular knockout, and Skinner looks sensational in a red gown for acerbic Phyllis that spells instant ownership of any room she enters.

In the split of directorial duties, it would appear that Prince, now 89, has brought intimate familiarity with the material to each chapter while Stroman — who doubles as choreographer, and first collaborated with Prince in that role on Show Boat — has applied her gifts for sleek, streamlined presentation and dynamically fluid transitions. There’s generally enough vitality in the staging and performances to help overcome the shortage of personal insights in the narration, which sticks to generic observations about luck, persistence, taste, great collaborators and the fact that hits and flops cannot automatically be equated with successes and failures. But then again, there’s something to be said for a production that favors show over tell.

Ultimately, Prince of Broadway is a bit like getting pulled into the YouTube vortex of vintage musical clips, providing a pleasurable reminder of great theater experiences. And with this material and these performers, that’s sufficient reward.