Los Angeles County met a new milestone on Sunday in the fight against COVID-19: Zero deaths.

The good news for the area, once a hot spot in the pandemic with the most infections and the tightest restrictions on normal life, just so happened to coincide with another landmark moment in VAX LIVE: The Concert to Reunite the World.  Held at the new SoFi Stadium in Inglewood, the Global Citizen concert marked the first large-scale music event since March 2020 when the pandemic crushed the events landscape and led to an extended period of isolation.

Life may not be fully back to normal but Sunday night’s show provided a glimpse into what it could soon look like thanks to widespread vaccine distribution as ticketed guests were allowed in only after proving fully vaccinated status as of April 18. The audience, made up of mostly frontline workers like health care professionals, first responders and essential employees (some of whom were in uniform), didn’t quite fill half the stadium (capacity 70,000) but the show they saw was a spectacular production fit for a sold-out crowd. Taped to air May 8 across ABC, ABC News Live, CBS, YouTube, iHeartMedia stations and the iHeartRadio App, it featured pyrotechnics, some lavish setups and a bevy of stars onstage.

Jennifer Lopez, the Foo Fighters, Eddie Vedder, J Balvin and newly minted Oscar winner H.E.R. performed while the presenter roster included Ben Affleck, Jimmy Kimmel, David Letterman, Chrissy Teigen, Olivia Munn and Sean Penn with Selena Gomez hosting and appearing throughout the nearly three-hour show. But perhaps the most notable name was Prince Harry, who received a rock star’s welcome with a standing ovation as he made his first major public appearance in California since moving to Montecito with wife Meghan Markle. The duo served as campaign chairs for VAX LIVE and Prince Harry (appearing solo while expectant Markle presumably stayed home) hit the stage twice to advocate for widespread vaccine distribution while also taking aim at the war on misinformation.

“We are at a defining moment in the global fight against COVID-19. Tonight is a celebration of each of you here, the vaccinated frontline workers in the audience and the millions of frontline heroes around the world,” said Prince Harry, dressed casually in a J. Crew button-down and oxfords, after being greeted by a standing ovation. “You spent the last year battling courageously and selflessly to protect us all. You’ve served and sacrificed, put yourselves in harm’s way and acted with bravery knowing the costs. We owe you an incredible depth of gratitude — thank you. But we’re also coming together because this pandemic will not end unless we act collectively with an unprecedented commitment to our shared humanity. The vaccine must be distributed to everyone everywhere. We cannot rest or truly recover until there is fair distribution to every corner of the world.”

Well, he’s here! Los Angeles LOVES Prince Harry tonight — he gets electric reception and standing ovation as he steps out on the biggest stage since moving down the road in Montecito. #VaxLive pic.twitter.com/ewzqZ7WnYz

Equitable distribution was a through-line of the event with several presenters and performers, like Vedder, calling on world leaders, governments and vaccine manufacturers to ramp up rollouts to countries in need. While COVID-19 is under control in the United States, there are parts of Asia and Africa where it remains a threat. India is currently in a crisis as it faces a reported “world’s worst surge in infections.”

On the subject of misinformation, Prince Harry referred to it as a “global humanitarian crisis.” Before doing so, he spoke candidly to the crowd by warning them that the next segment was “a bit dry.” He then told the audience that “every single one of you in here are awesome.” Back to the dry part: “I understand why people are confused or sometimes don’t know what to think or believe about vaccines. We are experiencing a viral pandemic alongside a digital pandemic. In today’s world we are so connected like a vast nervous system whether we are online or not. much like the virus, there are no borders online. so when vaccine misinformation and disinformation spreads, magnified on social media and in parts of traditional media, it exposes a collective threat to humanity.”

The rallying cry was met and matched by other presenters who urged a collective response to the ongoing pandemic. Gomez said rather than lecture, she was going to beg viewers to get the vaccine. “Please, please get vaccinated for your family, your neighbors and every single person you come in contact with,” she said. “Tonight, we are calling on leaders from around the world, governments businesses and philanthropists to donate dollars and doses to parts of the world where the vaccines have not yet been reached. We need to get more doses to people around the world who need them.”

On that note, Global Citizen announced that as of Sunday night, $53.8 million in philanthropic and corporate donations have thus far helped procure nearly 10.3 million doses. Global Citizen co-founder and CEO Hugh Evans said momentum is only building. “Critically, we need to see the U.S. and the U.K. step up and start sharing additional doses, and we need pharmaceutical companies such as Moderna to urgently provide millions of doses of COVAX for the poorest nations at nonprofit prices.”

Evans appeared onstage before cameras started rolling during a series of remarks from sponsors, partners and local leaders, including L.A. County Department of Public Health director Dr. Barbra Ferrer. “I am acutely aware that we can share this space with each other because we are among the privilege to have already been fully vaccinated,” she said, while also nodding to the devastation caused by the crisis. “This has been a year filled with sadness. We lost over 23,000 cherished members of our L.A. communities to the virus, and so many others lost their livelihoods and will live with this pain forever. Global vaccinations are the way out of this worldwide pandemic.”

Dr. Barbara Ferrer, director of LA County Dept of Health, gets her much deserved moment in spotlight to praise COVID-19 recovery efforts, healthcare workers. But even on day with 0 deaths in area, she reminds of 23,000 lives lost in pandemic. #VaxLive pic.twitter.com/TP2crJCx2M

World leaders were well represented, as well, but they appeared only in recorded segments played on the big screen above the stage. President Joe Biden said “vaccines are safe, I promise you,” while Pope Francis added, “I beg you not to forget the most vulnerable.” Others who lent their voice: Vice President Kamala Harris, European Commission President Ursula von der Leyen, Prime Minister of Norway Erna Solberg, Prime Minister of Spain Pedro Sanchez, President of France Emmanuel Macron, Prime Minister of Canada Justin Trudeau and Prime Minister of Croatia Andrej Plenkovic.

Back to the music. Jennifer Lopez put on quite a show, delivering what will be the opening number of the telecast with a rendition of the Neil Diamond classic “Sweet Caroline.” Wearing Zuhair Murad Couture, the 51-year-old said she didn’t get to spend Christmas with her mother, Guadalupe Rodriguez, for the first time in her life due to the pandemic. “We’ve been away too long, but she’s here with me tonight and she is vaccinated,” Lopez explained.

She then welcomed Rodriguez to the stage to join her in singing the Diamond blockbuster single with a twist.  “Sing it to them just like you used to sing it to me, OK?” Lopez said, wrapping an arm around her mother and allowing her to sing “Sweet Jennifer.” Later, Lopez returned backed by a cadre of backup dancers for her song “Ain’t Your Mama.” 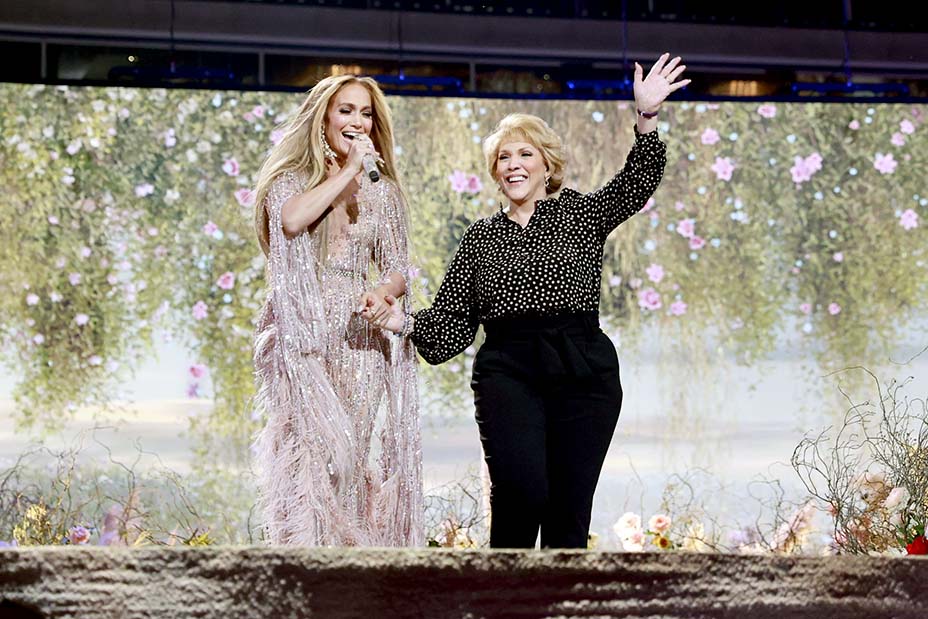 Following Lopez’s first performance, Ben Affleck and Jimmy Kimmel walked to center stage. Affleck, a Boston Red Sox superfan surely recognized the “Sweet Caroline” track as it’s become the traditional song of the team, played at every game before the bottom of the eighth inning. Affleck, decked out in Dolce & Gabbana, engaged in a comical back-and-forth with Kimmel, who went for a superhero vibe in a Robin costume a la Batman and Robin. “You told me we were dressing up,” Kimmel quipped. “I am wearing my suit and you’re not wearing your suit. You’re Batman!”

Sean Penn did not shout out any superheroes but he did call out the heroes in SoFi, including those from his nonprofit CORE, which stepped up during the pandemic to help the city of Los Angeles first with testing and later vaccinations. “This night is the first taste of the life we have all been missing. To share it with so many heroes is humbling.” Penn then introduced “my great friend and brother in arms,” Eddie Vedder.

Vedder rocked a two-song set and explained in between how it felt to be back onstage in front of a large crowd. “Holy fuck,” he said. “This is a feeling we have not had in quite some time. It feels pretty good.”

Also feeling good were Dave Grohl and his Foo Fighters bandmates, who were joined by a surprise guest — AC/DC’s Brian Johnson. Letterman introduced the night’s final act, and the rockers did their best to test out the acoustics in the new SoFi Stadium while putting an exclamation point on COVID-19 recovery efforts. “We ain’t out of the woods yet, but let me tell you,” Grohl explained, “I am a firm believer in the idea that music should be shared with people. Let’s work as hard as we can to make sure that we can do this every fucking night for the rest of our lives.” 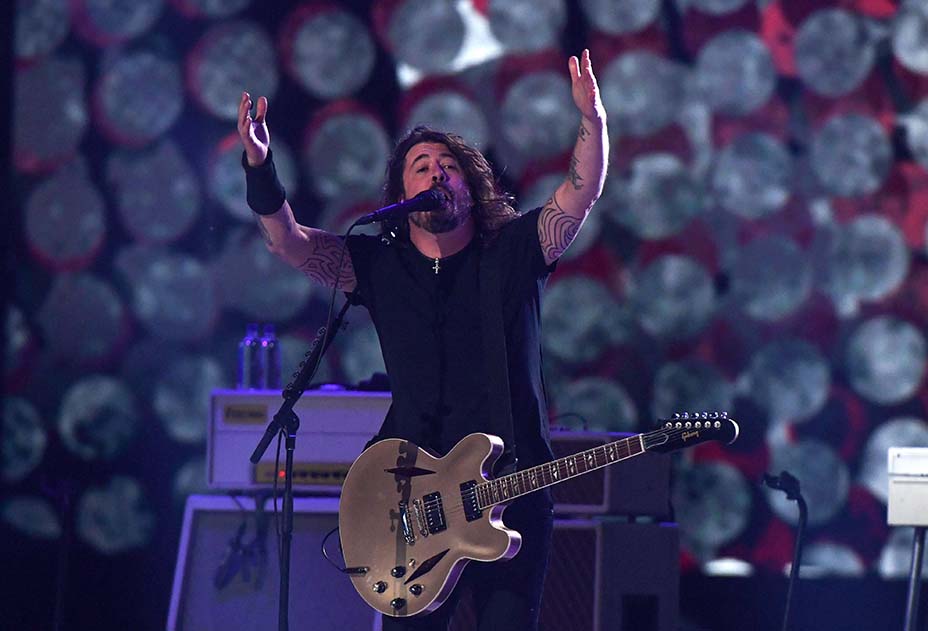 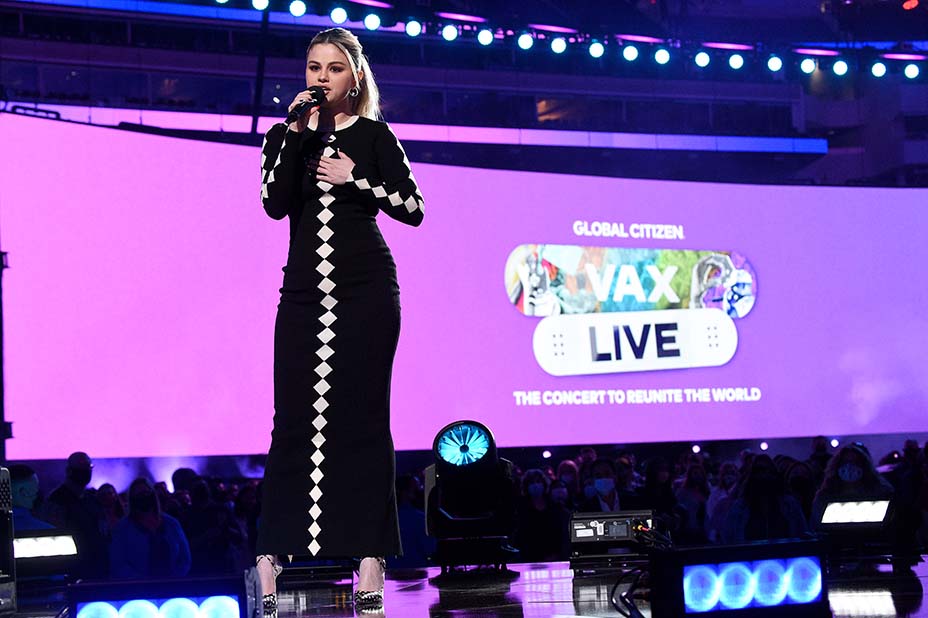 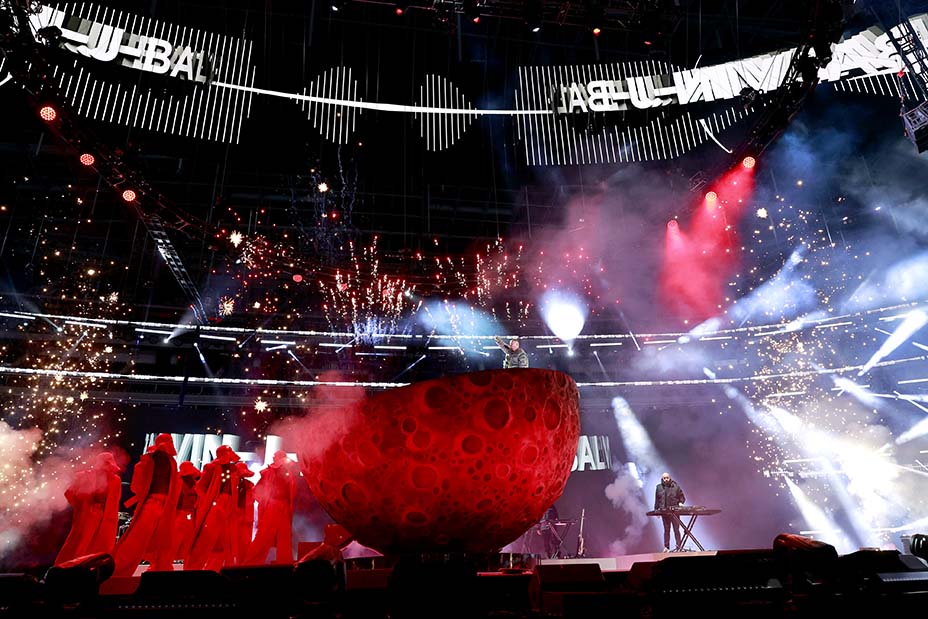 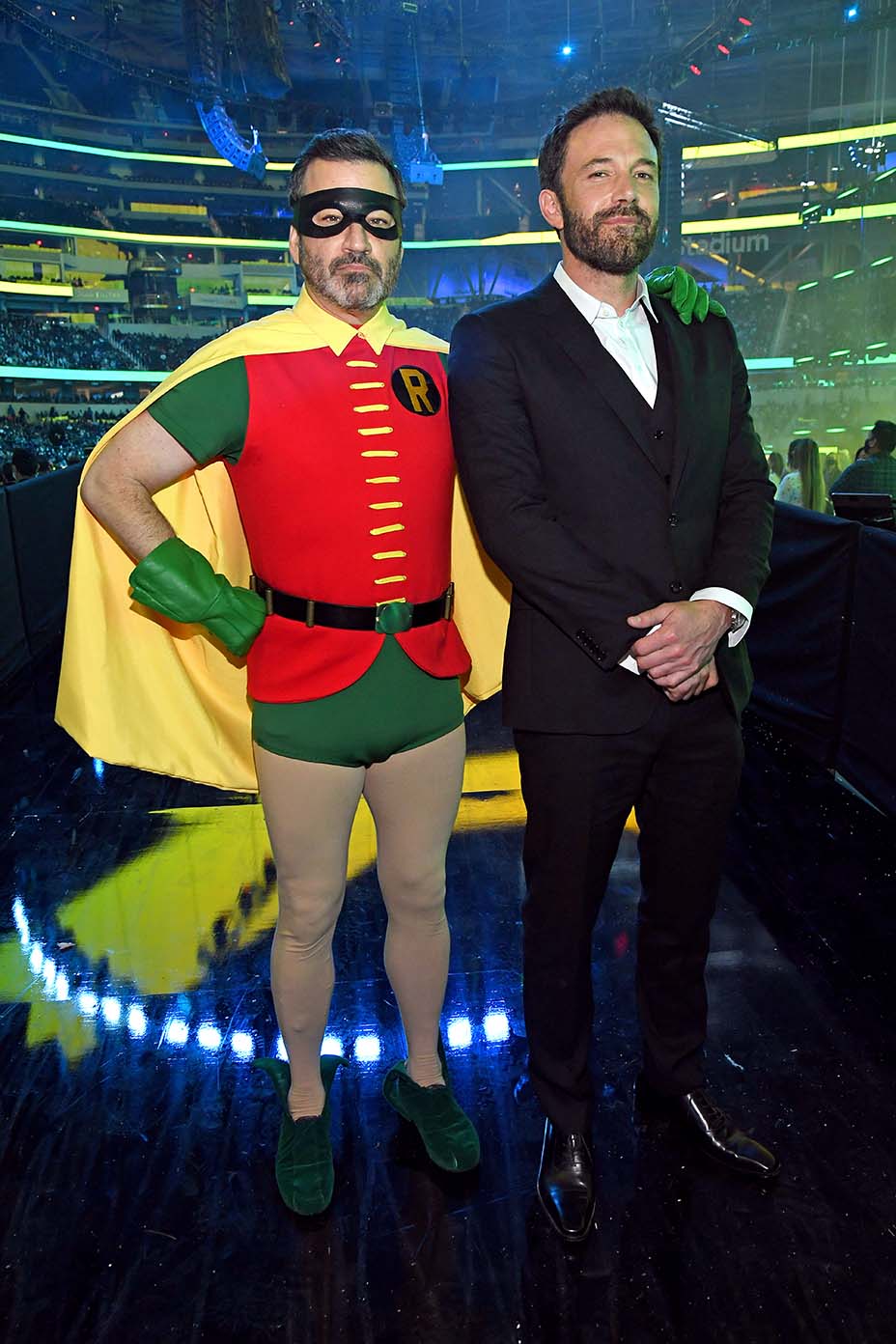